Conditions were ideal along the Llano River last weekend with sprays of late season nectar plants poised for the arrival of Monarch butterflies in what is predicted to be a down year for their migration. 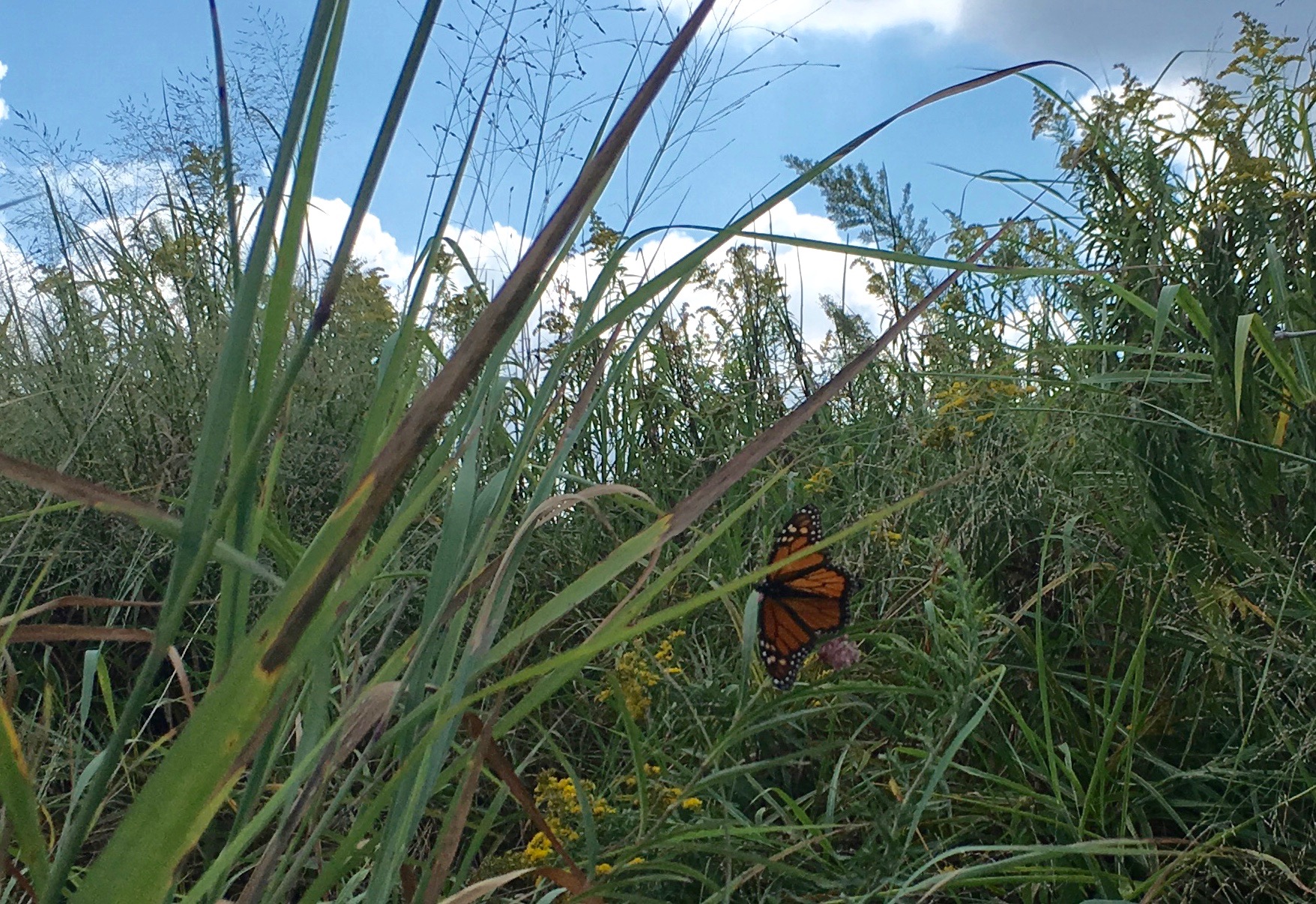 Sprays of Goldenrod, Frostweed, Swamp milkweed and other late bloomers graced the river banks and surrounding watershed while migration forecasters called for a setback.

On March 8, a freak spring ice storm brought ice, snow and dramatic winds to the Oyamel forest where the Monarchs roost each winter. Just as they were heading north to lay the first generation of eggs in Texas, the storm destroyed 135 acres of forest and killed an estimated 6.2 million butterflies – about 7.4% of the 84 million roosting at that particular preserve, Mexico’s Attorney General for Environmental Protection Alejandro Del Mazo recently told the Associated Press. 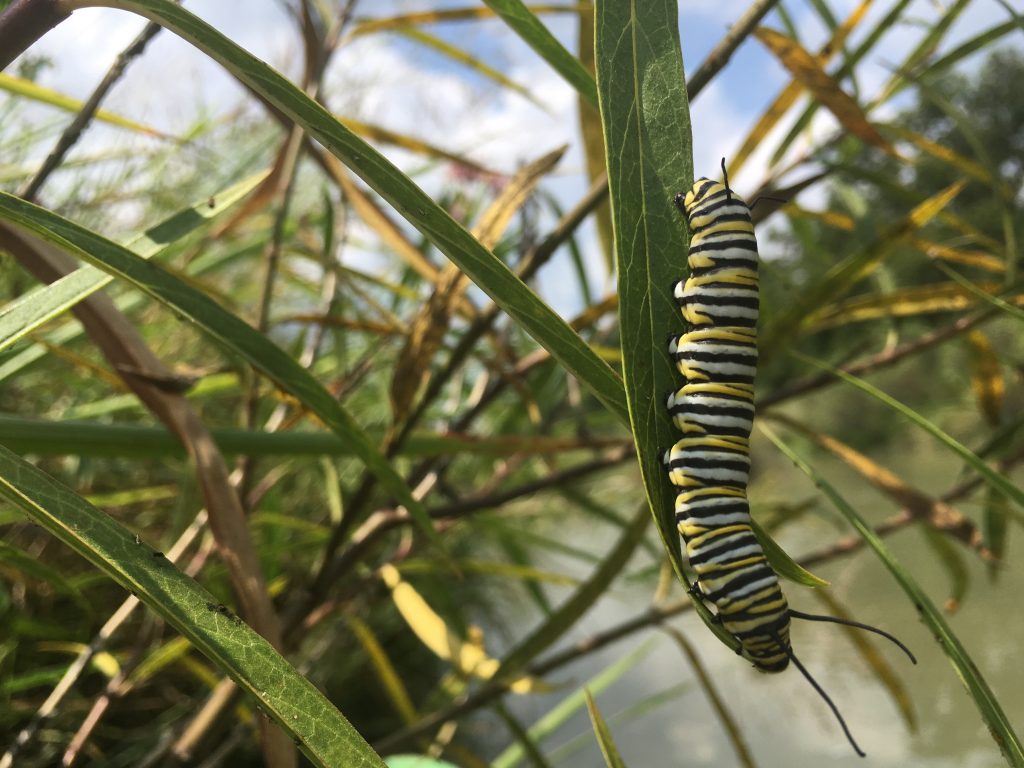 Hangin’ out on the Llano. Monarch butterfly caterpillars and eggs were abundant last weekend on the Llano River. Photo by Monika Maeckle

The squall set the 2016 season off to a bad start and will likely result in a setback to the threefold population increase the Monarchs enjoyed last year, scientists suggest.

In the past year, here and elsewhere, the migrating orange-and-black insects have never enjoyed more fame and fortune, as government and educational institutions have increased pollinator habitat, earmarked millions for research on milkweed – the insects’ host plant – and raised public awareness of Monarchs and other pollinators to unprecedented heights.

“I know how much we all look forward to seeing the majestic Monarchs every year, and it saddens me to think that their population has been impacted so dramatically by the ice storm in Mexico,” said Mayor Ivy Taylor, who signed the NWF’s Mayor’s Monarch Pledge on Dec. 9 last year. “However, we will keep working to provide them with a safe haven here in San Antonio.”

Chip Taylor, Ph.D., founder of Monarch Watch, predicted in his annual summer Monarch Population Status blog post that 2016 would likely be comparable to 2014. The last three years have been closely monitored by Monarch aficionados: In 2013, the population dropped to 33.5 million butterflies, the lowest since records have been kept; in 2014, it increased to 56.5 million; and last year 200.5 million butterflies were recorded.

In 2015, President Obama released a National Pollinator Strategy that set out to increase the Monarch population to 225 million – the historic 20-year average.
The iconic insects make one of the most remarkable annual migrations on the planet, traveling up to 2,800 miles from Mexico through the United States to Canada and back over multiple generations.

Monarch butterflies move through San Antonio coming and going in the spring and fall on the annual multigeneration migration. Graphic by Nicolas Rivard.

Their journey starts in March, where they spend the winter in the Oyamel fir forests. After a cue from the sun, they head to Texas where they lay their first generation of eggs on milkweed plants – the only plant they use to breed. Those eggs hatch into caterpillars who then grow into butterflies that continue the cycle over the summer, with fourth or fifth generation butterflies returning to Mexico in the fall to overwinter, despite never having been to the specific roosting site where their ancestors launched the journey. The following spring, those butterflies begin the cycle anew.

Glum predictions aside, conditions could not be more perfect in Texas to welcome the migrating butterflies this fall.

Each year around Labor Day we see the first trickle of Monarchs, or what’s called the ‘pre-migration migration’ – a vanguard of reproductive Monarch butterflies that lay eggs which will hatch and become the final generation of migrating adults.

Last weekend, half a dozen adult Monarch butterflies showed up right on cue along the Llano River in the Texas Hill Country. Even more interesting, dozens of caterpillars and eggs were spotted on the Swamp milkweed, Asclepias incarnata, a Monarch butterfly host plant, and suggested that Monarchs had been passing through in the preceding weeks. Three late stage caterpillars literally hung out on the Llano, preparing to bust their stripes and go chrysalis.

A male Monarch butterfly nectars on Swamp milkweed along the Llano River in the Texas Hill Country as part of the “pre-migration migration.” Photo by Monika Maeckle.

A quick survey of local Monarch Watchers had few sightings to report.

Sightings throughout the spring and summer have been slim, with the freak sleet storm taking most of the blame for the Monarchs’ absence.  Read more here.
To determine peak migration time for your area, consult the Monarch Watch website or Journey North.  In San Antonio, at 29 degrees latitude, we’re looking at seeing the butterflies sometime in late October.