They’re here.  But once again, Monarch butterflies confound and intrigue with their interesting choices and unpredictable behaviour as they make their annual migration to Mexico.
Scientists and enthusiastic observers like myself were guessing that the millions of Monarch butterflies that pass through Texas each Fall would hug the Texas

Hill Country streams and river systems or gravitate to the Gulf Coast where more moisture might offer occasional flowers for nectaring.
But observers contributing to the Monarch Watch D-Plex listserv, an email list established by Monarch Watch founder Dr. Chip Taylor, have Monarchs massing and roosting in West Texas, the most parched area of our state.  Excerpts from emails follow.

Matt York, Marathon, Brewster County:  Gage Gardens, here in Marathon Paradise City, had conservative reports of  ‘at least 2k’ monarchs.  Much of that guesstimate gathered from roosting clusters in trees.  In town we still had them flitting about, generally southward.

Dave Marqua, near Ft. Davis: I am seeing many Monarchs heading south. Last Friday, I went to Alpine (about 50 miles from my house up here in the mountains) and noticed several Monarchs crossing the road and heading south….every time I go out of the house I see one or two, heading south.  There is never a group.
Penelope Melton, 12 miles south of Alpine: There were an uncountable number of Monarchs resting on the cottonwood trees at our dirt tank Saturday evening 10/1.  They spent the day Sunday nectaring on Bacharris, Beebrush and some kind of sunflower and left Monday AM.

Over on Twitter, the Texas Parks and Wildlife Twitter feed posted the beautiful photo above with this tweet:  Monarch migration time in Texas. This one stops for food at Indian Lodge in the Davis Mtns. 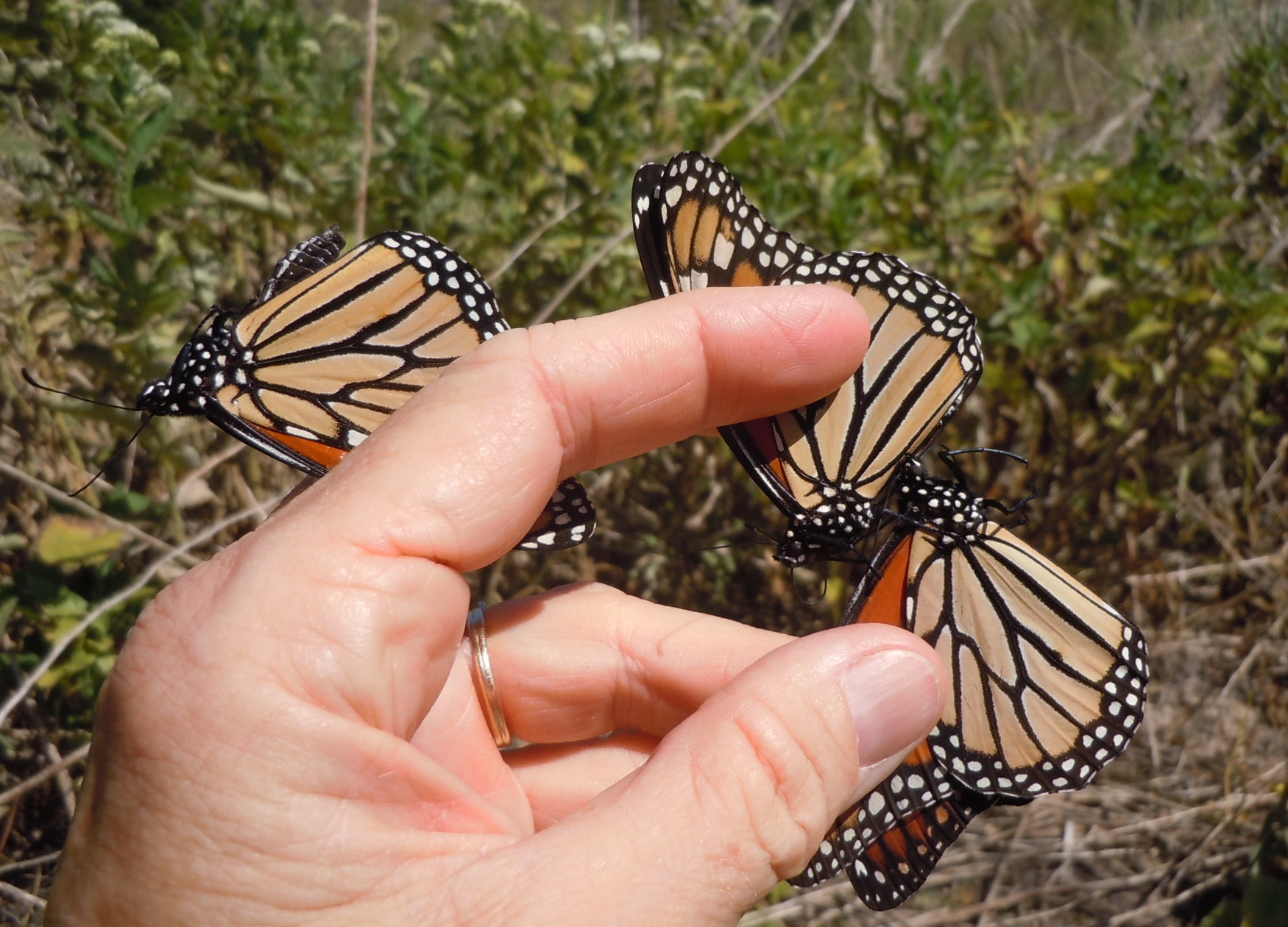 Lucky swing: three Monarch butterflies netted in one swoop on the Llano River

We saw hundreds of Monarch butterflies on the Llano River again this weekend, but they weren’t massing as they usually do.  Almost all of the 104 we tagged were netted nectaring on Frostweed in the Chigger Islands that dot the Llano between Mason and Junction.    Most were in fine shape, but some, like the one above, were beat up from their travels–unlikely candidates for a Mexico arrival.   We witnessed one incident of mating behaviour, but no eggs were present on the Swamp Milkweed.
Occasional Monarchs have stopped by my front yard in Austin this week as well, laying eggs and taking quick sips of lantana.
Peak migration is upon us (through October 22 or so), as predicted by Monarch Watch for our latitude, so keep your eyes open for them.