Weather extremes create quandary: what to do with late season butterflies?

The first week of 2017 can be likened to the worst of a bad relationship, vacillating between hot and cold so drastically we’re left perplexed. What to wear–sweater and long johns or shorts and a t-shirt?

San Antonio Mayor’s Mikey the Monarch hatched and was released at the San Antonio Zoo flighthouse on January 5. The temperature outside was in the 40s. Photo courtesy San Antonio Zoo

Imagine what that’s like for butterflies and other cold-blooded creatures.The first six days of San Antonio’s New Year had temperatures swinging from 29 to 81.

Such drama will continue. With cozy pockets of our urban heat islands creating perfect microclimates for year-round host plants, Monarchs, Queens Gulf fritillaries and others continue to lay their eggs irrespective of the seasons. The eggs will hatch, morph into caterpillars which some of us won’t be able to resist bringing inside and raising to the chrysalis stage. Then on a mild winter day–like last Tuesday or Thursday when temperatures climbed to 81 and 71 respectively–a glorious, perfect butterfly will hatch.

Then what? It’s 29 degrees outside.

Generally, butterflies won’t fly when temperatures are less than 55 or 60 degrees. And after spending weeks fostering an egg, then a caterpillar, and finally a chrysalis to the point of becoming a butterfly, the idea of unleashing it into a cold, wintry wind seems brutally unacceptable.

“Cold weather does a number on all insects. That’s a given,” said entomologist MIke Quinn, who runs the über helpful insect education website Texasento.net.

I’ve stopped raising butterflies at home in the winter because the stress of having to deal with these late season beauties cancels much of the fun for me. After December 1, I let Nature do her thing.

But I get that many can’t resist having colorful creatures lilting around your home or office providing their unique charms in the dead of winter.

Our butterfly friendly Mayor Ivy Taylor hatched Mikey the Monarch on January 5. Mikey got a free ride to the San Antonio Zoo to live out the rest of his life in the climate controlled flighthouse filled with coddled milkweed and other plants the Zoo keeps in its greenhouse. Education manager Laurie Brown said Mikey may be released to the elements if temperatures warm up.

Our friend, District 1 City Councilman and Monarch Butterfly and Pollinator Festival docent Roberto Treviño got lucky with a milkweed plant we gave him in November. The gift included one fifth star Monarch caterpillar and one Monarch chrysalis. Yet Treviño ended up with four extra butterflies-in-progress. Unbeknownst to us, several eggs were hiding in the milkweed plant.

Councilman Treviño tagged and released the Monarchs, which hatched around Thanksgiving. He’s hatched several Queens since, the last of which emerged this week  on a chilly winter day. His strategy? Hold the butterflies indoors until the weather warms up, then release them on the San Antonio River.

This Queen hatched in January in Treviño’s office. Check out the frass on the keyboard and around the computer. Photo courtesy Roberto Treviño

Caterpillar found its way to the computer plug to make its chrysalis. Hey, it’s warm back there! Photo courtesy Roberto Treviño

Is San Antonio a butterfly friendly city or what? Photo courtesy of Roberto Treviño

So for those who can’t resist fostering butterflies in winter, here’s some tips for dealing with late season butterflies, recast from a 2013 blogpost.

Entomologist Quinn suggests if you bring in found caterpillars, eggs or chrysalises, park them on a screened porch or cool garage to slow down their development in anticipation of warmer weather. Quinn points out that some butterflies overwinter in the chrysalis stage (like Swallowtails) while others, like Monarchs, overwinter in the adult, butterfly stage.

If you have adult butterflies and want to hold them for warmer days, Connie Hodson, a butterfly breeder and owner of Flutterby Gardens in Tampa Bay, Florida recommends sponges–scrubbers, actually–soaked in grape- or punch-flavored Gatorade laid out in shallow dishes in a butterfly cage. 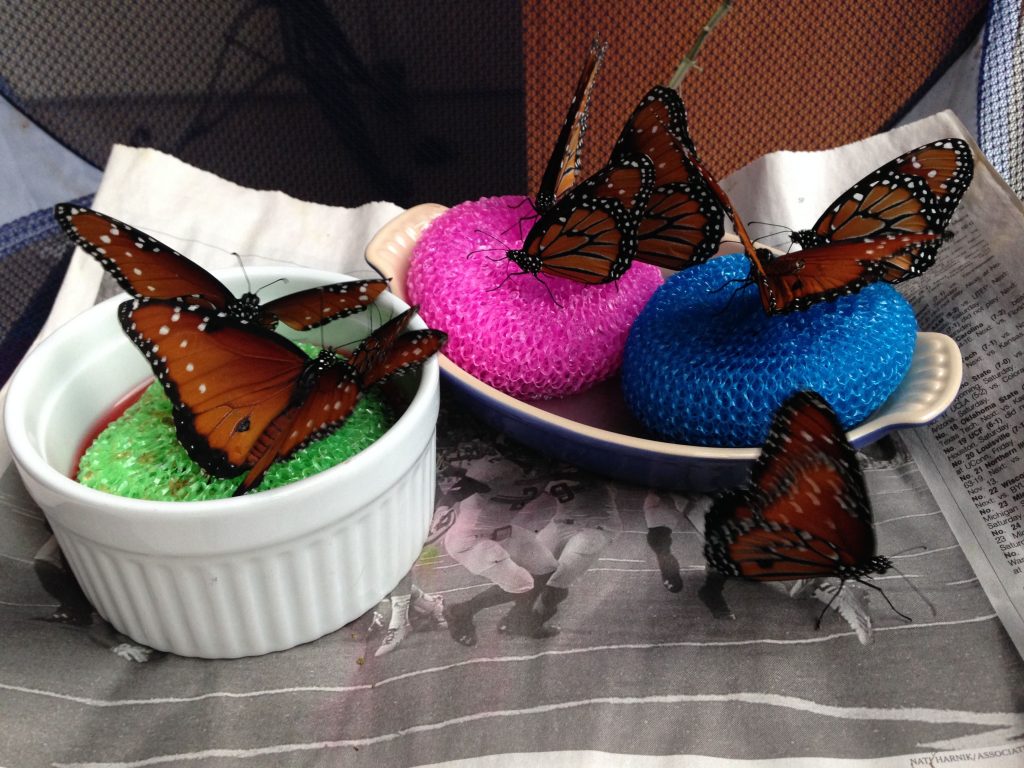 Baby, it’s cold outside: soak scrubbers in Gatorade so butterflies can fuel up for when the weather turns. Photo by Monika Maeckle

Since butterflies taste with their feet, you have to set them on the sponge so they can “taste” the fake nectar, whetting their appetite. At that point, they’ll extend their long proboscis and slurp some fuel to power their flight.

You can try bringing in cut or potted flowers and laying out a spread of overripe fruit in the butterfly cage. Cotton balls soaked in sugar-water and apple juice are 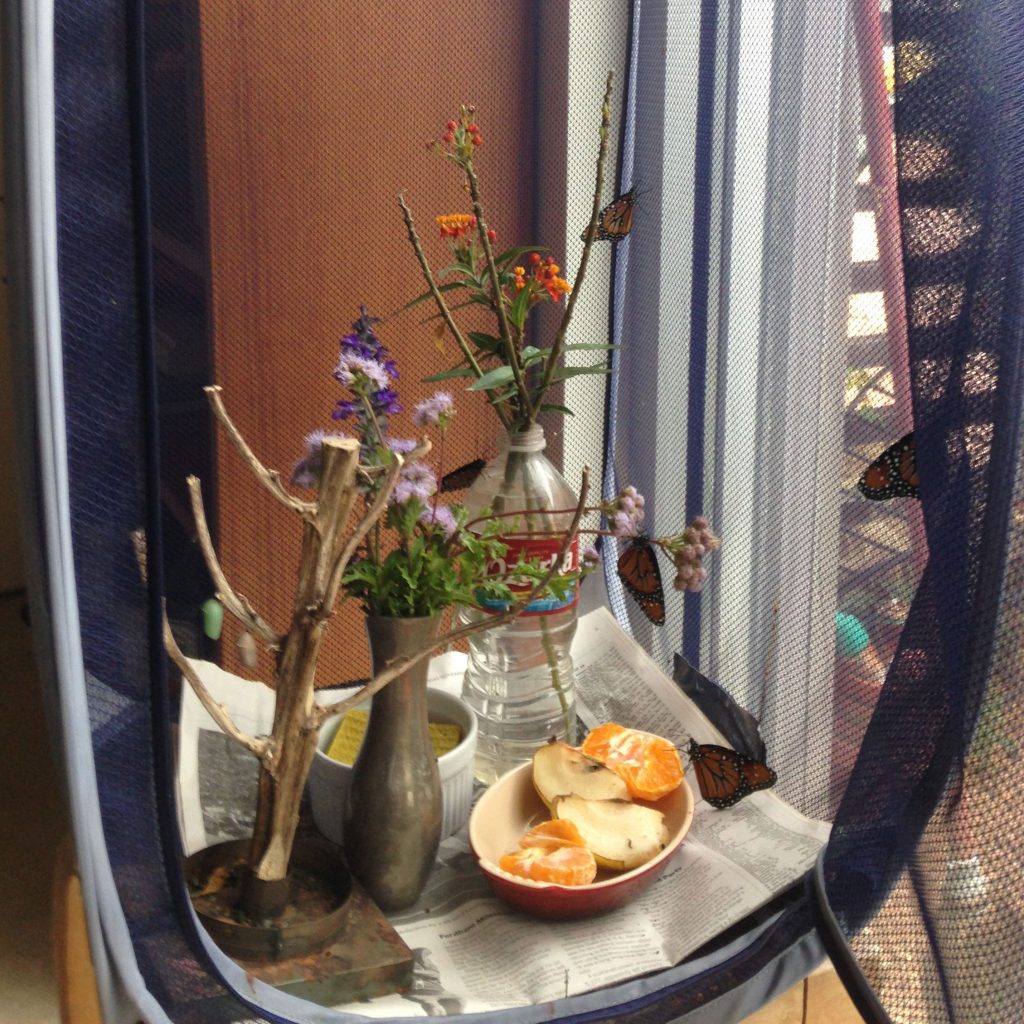 Queens were not too keen on my offerings of fruit, flowers and sugar water. Photo by Monika Maeckle

another option. I’ve had mixed success with this. Sometimes the butterflies accept the smorgasbord, but mostly not.
Butterfly breeder Barbara Dorf of Big Tree Butterflies in Rockport likes to use tried-and-true hummingbird nectar–four parts water to one part sugar. She said a shallow dish or the top of a plastic container work well as a feeding station.  Lightly misting the sides of the cage with water helps the butterflies stay hydrated. “All you can do is keep them til a good warm day,” said Dorf.

Hodson pointed out that recently hatched butterflies are not hungry for the first 24 – 48 hours, so if sun is in tomorrow’s forecast, just wait. If days pass and the weather hasn’t turned, continue offering fresh nectar surrogates and keep spritzing the netting of the cage.
If the butterflies resist the sponge or scrubber, Hodson suggested taking a Q-tip, dipping it in the Gatorade and gently touching the creatures’ proboscis so they get the hang of it.