Three park rangers have been redeployed to patrol one of the most visited Monarch butterfly overwintering sites in Mexico after having been summarily reassigned elsewhere following the end of the 2017 ecotourism season. The return of the rangers follows the launch of a Change.org petition that gathered 2,088 signatures in three weeks. 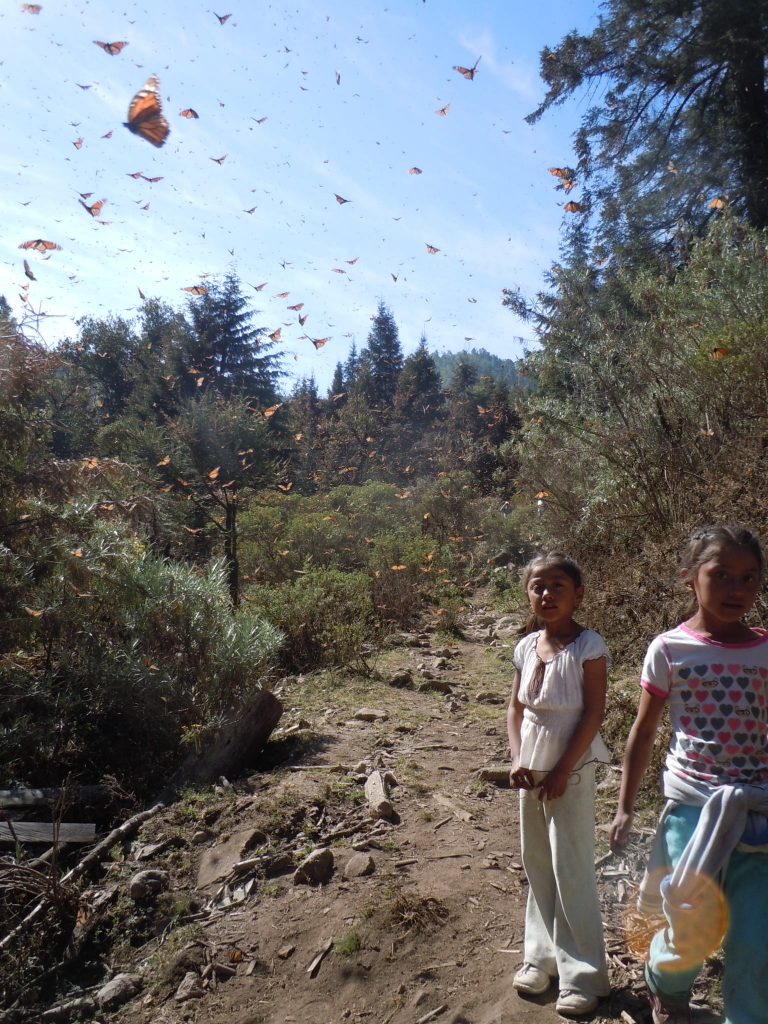 Cerro Pelón in the state of Mexico near Macheros.  Photo by Monika Maeckle

“Victory! The Rangers Are Back on Cerro Pelón,” Dr. Ellen Sharp wrote to those who signed the petition she launched June 16. Sharp thanked those who lent their signatures to the cause and noted the three rangers are back in action, working to prevent illegal logging from undermining the protective ecosystem of the butterfly forest.
“The petition did not have anything to do with the return of the rangers,” said Eduardo Rendon-Salinas, of the World Wildlife Fund Mexico, via email. “That was an instruction of the CEPANAF (National Park Service) Director since June 19th, when we had a meeting to analyze that issue.”
In other words, three days after the launch of the petition. Sharp’s brother-in-law, Patricio Moreno, relayed that the rangers returned to work on July 4. Requests for comment from CONABIO, the Mexican government’s national commission on biodiversity, went unanswered.
Sharp launched the Protect the Monarch Butterfly Forest: Bring Back the Rangers! petition with an email to the D-PLEX, a listserv of about 800 scientists, citizen scientists, conservationists, enthusiasts, and others that follow Monarch butterfly news.
“My husband Joel, who grew up on the Monarch Butterfly Biosphere Reserve, says that nobody cares about the Monarch butterfly forest when the butterflies aren’t there,” Sharp wrote in a post shared with”As if to prove his point, the only full time forest rangers employed at the Cerro Pelón sanctuary were permanently transferred to another site as soon as the Monarchs left this season.” 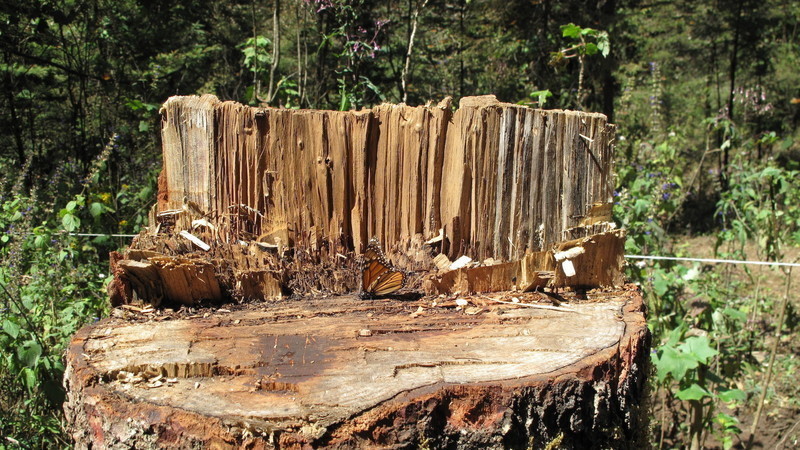 Illegal logging continues at Cerro Pelón, but is less common when rangers patrol the sanctuary. Photo by Ellen Sharp

Sharp took to social media asking people to sign and share the petition. She pointed out that illegal logging of the butterfly forest had increased visibly in the absence of daily security. More than 30 trees had been felled, just around her home and the J&M Butterfly B&B she and her husband Joel Moreno own and operate with his family at the entrance of Cerro Pelón.
The rangers had patrolled and protected this second most visited roosting site for 30 years.  Until April.
After the last of the tourists returned from their horseback treks up the mountain and packed their bags to close out the 2017 ecotourism season, the three park rangers charged with patrolling the forest in the reserve’s core zone were reassigned elsewhere.  Monarch tourism season typically runs November – March.  Someone somewhere decided that paying rangers in the off-season was an unnecessary expense. 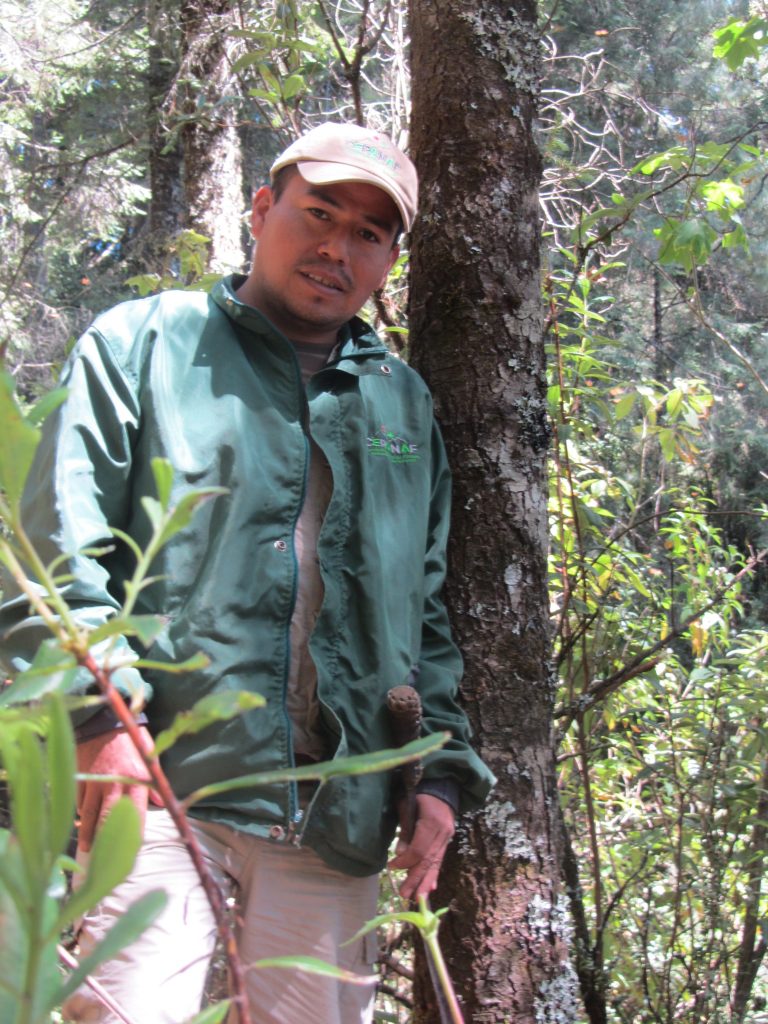 Patricio Moreno, park ranger at Cerro Pelón, is back on the job. Photo courtesy Ellen Sharp

We all know that crimes happen more often when no one is watching. At night, we lock the doors and leave the front porch light on. You wouldn’t leave your front door wide open upon departing for long vacation, so why would those responsible for protecting the Monarch butterfly roosting sites leave it vulnerable and unprotected for months at a time?
That’s the question posed by Sharp, whose education and training as a cultural anthropologist shape her perspective on Cerro Pelón as much as her union with Joel Moreno.

Moreno was born in the house that became the B&B. He grew up in Macheros, the local town that is home to Cerro Pelón and helps run the business. He also serves as a butterfly tour guide for visitors. Moreno’s father, Melquiades, worked as a forest ranger at the Cerro Pelón sanctuary for decades. His brother, Patricio, known as Pato, took over the job and knows the community well.
The forest is personal to Sharp and Moreno. And with no one minding it, the couple noticed and documented an increase in illegal logging in the wake of absent rangers. That’s when Sharp assembled the petition.
Sharp brings a rich and informed take to the situation. An educated, well-traveled gringa who earned a PhD in anthropology at UCLA, she wrote her dissertation on vigilante justice in Guatemala. She shares our popular concern for the Monarch butterfly migration, but she pushes it further, advocating on behalf of the people who live full-time among the butterflies, including her own family. Sharp and Moreno formed Butterflies and their People, an associacion civil, the Mexican version of a nonprofit organization, to bring attention to this population, often left behind in the conservation and reforestation efforts in Mexico. 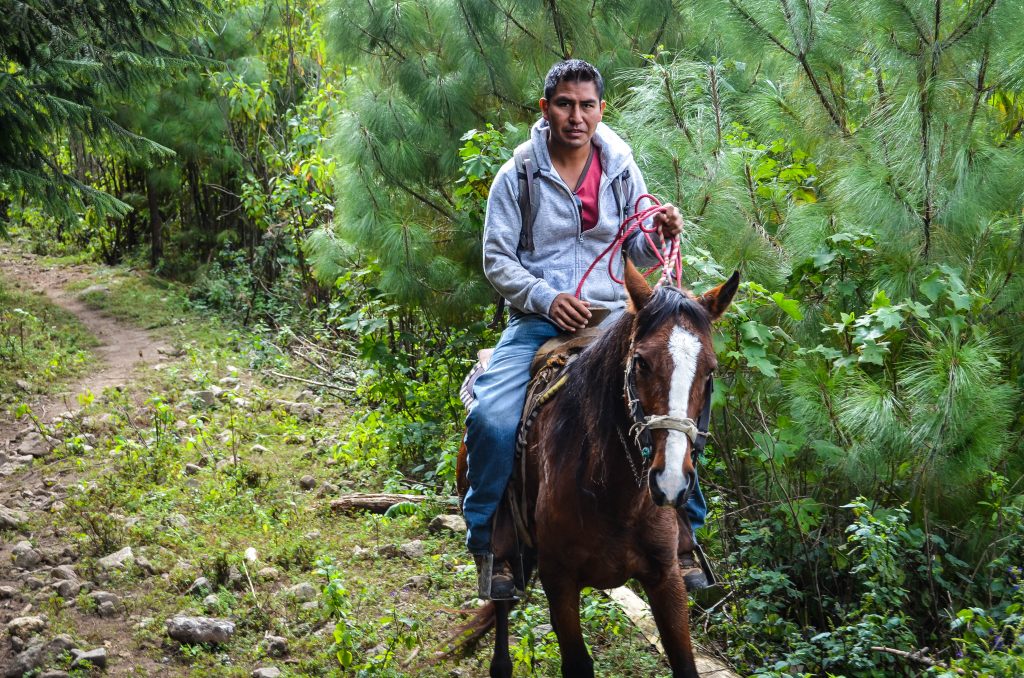 Sharp spoke recently at the 2017 Texas Pollinator PowWow, offering a provocative perspective on the roosting sites and the people who live there.  “People continue to cut down the forest,” she told the crowd in May. Citing a lack of transparency and no accountability of the millions of dollars funneled by well-intentioned nonprofits to Monarch butterfly and forest conservation, Sharp brings a needed social justice perspective to the growing interest in Monarch butterfly conservation. Read more about Sharp and Moreno’s work here.
By coincidence, design, or at the behest of digital activism, it’s heartening to see this positive turn. A bad decision has been highlighted and reversed. 2,088 more people are engaged in Monarch butterfly forest conservation. Kudos to Sharp and Moreno for calling it to our attention.
Related posts: