It was hardly the “pollinator-palooza” we usually witness in September as a few Monarch butterflies and just as few other pollinators competed for limited nectar on the Llano River this weekend.   And so begins the 2011 Monarch butterfly migration, with a whimper instead of the seasonal joyous glee.

Handful of Monarchs on the Llano River

A handful of Monarchs mingled with dragonflies, occasional bees, and a lonely Eastern Swallowtail as the random skipper lighted on blooming Swamp Milkweed.   September typically boasts an abundance of pollinators, but the drought and rampant wildfires have quashed that hope this season.   Fewer than 10 Monarchs and only a few other airborne nectavores came out to play during a 48-hour Hill Country visit.  The only upside?  No mosquitoes.
Lonely Snow-on-the-Praire pushed its way out of the dust just a few yards from the Llano River bank, as Goldenrod eeked out mild blooms.   Pink Swamp Milkweed hosted loads 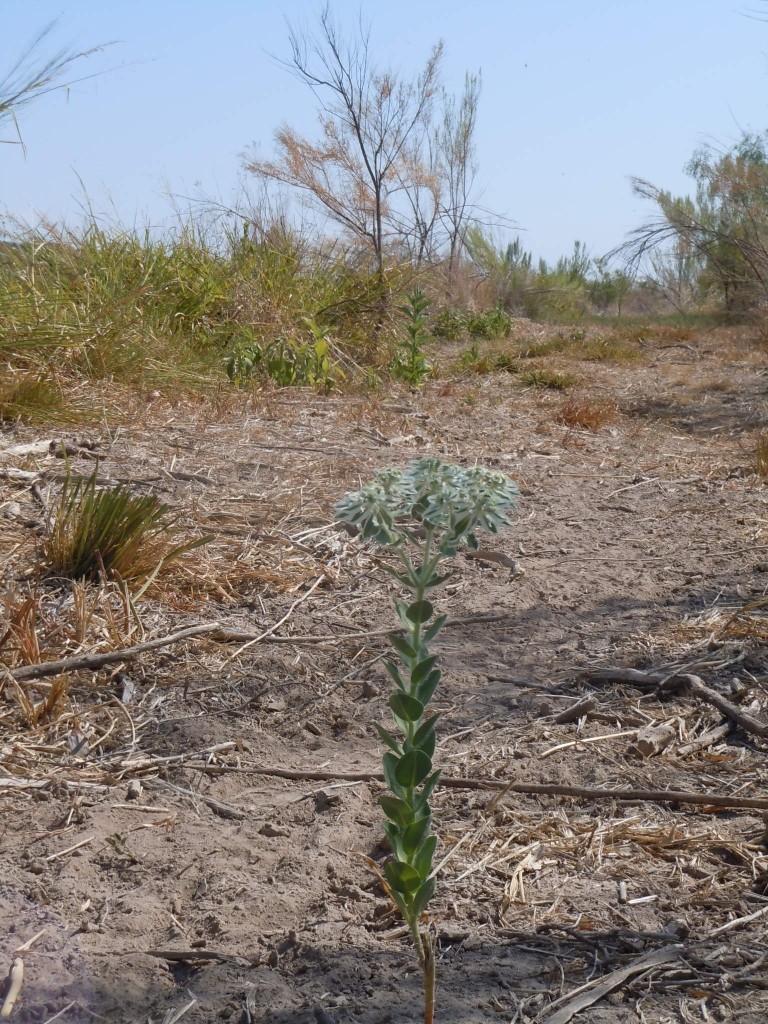 Snow-on-the-Prairie eeks life out of the dust

of Monarch eggs from the pre-migatory wave, but the plants measured half their usual size while the river continued its sad recession.   According to the Lower Colorado River Authority, the period from October 2010 to now marks the driest spell on record since record-keeping began in 1895.
A grove of  80-year-old pecan trees, always a favorite Monarch roosting spot, showed serious drought damage, with major limbs fallen to the ground from their own

dehydrated weight.  October arriving migrant Monarchs always favor these pecans, whose horizontal limbs reached over the Llano, offering safety and humidity.  Even the false willow, a bushy opportunist and reliable nectar source that lines the river bottom, exhibited drought fatigue, with entire bushes a crisp brown only feet from running water.
Reports from our friends at Journey North suggest Monarch roosts have been spotted north of Oklahoma.   Monarch fans on the Monarch Watch Facebook page indicate a healthy population finishing up their reproductive chores further North, with Hurricane Irene providing ample moisture for late season hatches.  They’ll be heading our way soon. The peak migration for our latitude is predicted for October 18 – 24.

We’ll be as ready as possible, but with little nectar, stunted plants, broken roosts and wildfires raging in every direction, the Texas Hill Country won’t be an inviting stop.