I have heard that when Monarch caterpillars run out of milkweed to fuel their feeding frenzy en route to becoming a migrating butterfly, they can become cannibalistic.  That makes Darwinian sense.   Facing competition and a lack of food, it’s understandable that a creature might eat what’s before it to survive.   Nature can be cruel.

Still, I was surprised this weekend when I watched a Monarch caterpillar retrieved from an aging milkweed plant nonchalantly devour a creamy yellow Monarch egg upon combining the two for safekeeping.    The second instar caterpillar appeared freshly minted, as if it had just shed its skin.  Its tentacles were still stuck to his head, not yet dry or perking up to explore the universe as they often do when in full form.  I’m betting that shedding your skin requires extra energy and works up an appetite. 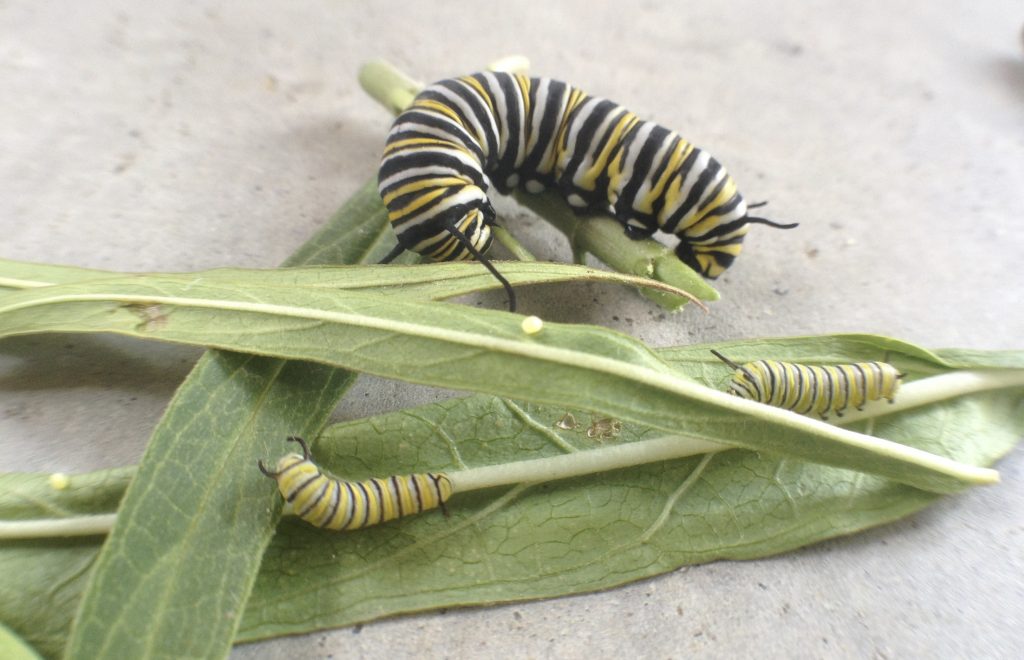 This caterpillar was hungry.  As soon as I plucked the leaf on which he rested and placed it in a container with a Monarch egg found earlier, the caterpillar quickly gravitated to the egg and began noshing.  It took about five seconds to decimate the egg.  The caterpillar knocked it back like a high protein jello shot.
Later, as an experiment, I put several caterpillars in with several eggs to see if they would do the same.  They did not.  Were they just not that hungry?  Scientists will have to answer that one.
“Cannibalism in monarchs is not unheard of – it usually occurs due to overcrowding and/or insufficient food availability, but this is not always the case,” wrote Jim Lovett of Monarch Watch when the “caterpillar cannibalism” question was posed on a Monarch Watch forum. “Most folks here will tell you to give the caterpillars plenty of room and to raise similarly-sized caterpillars together (don’t keep the larger caterpillars with the smaller ones).”
Sounds like good advice.   I generally keep eggs and tiny instars separate from their more voracious brethren.  In the case above, I was moving caterpillars and eggs from the river to the ranch house, holding them together temporarily.
Jacqueline Stearns responded on the same string that she had witnessed Monarch cannibalism.  “My first cat ever earlier this summer ended up killing my 2nd and 3rd cats and scaring my 4th and eating 3 eggs before I finally figured out what was happening,” Stearns posted on the forum.   She isolated the aggressive caterpillar and segregated the rest by size.   Since, she wrote, “have not had issue with any of the others until just last week. I found my youngest ones fighting and separated them (one is now a chrysalis) so I’m guessing they are safe together now.”
Whew. 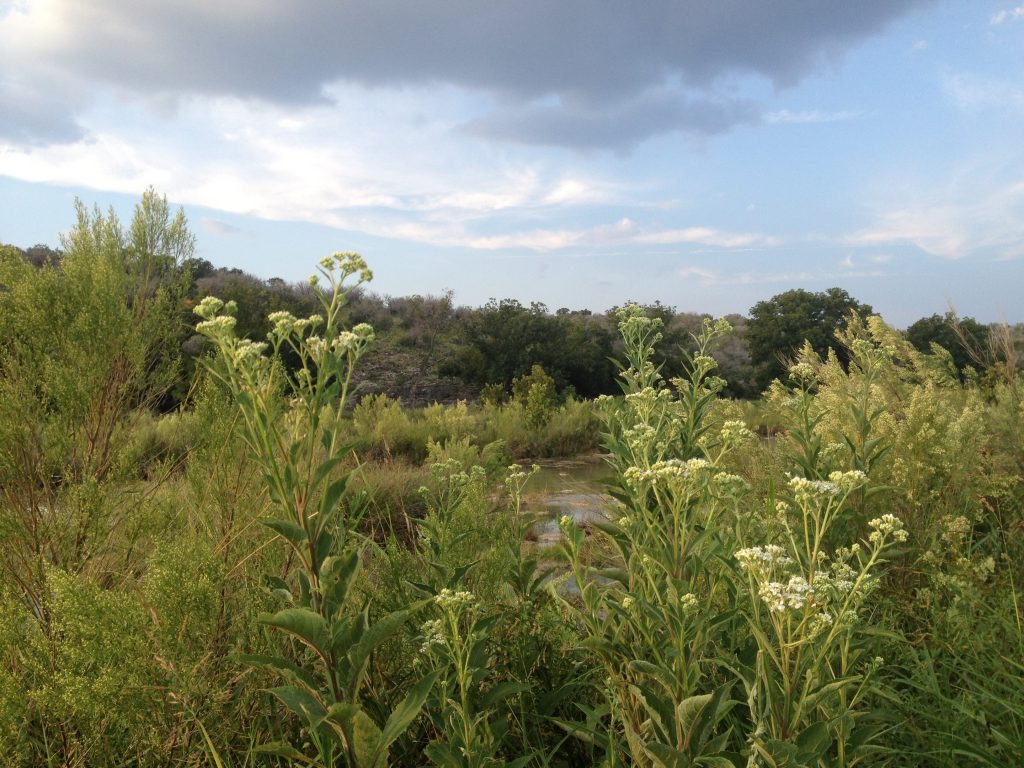 Frostweed on the Llano River awaits migrating Monarchs. Lookin’ good for a nectar fest in a few weeks. Photo by Monika Maeckle

Meanwhile, on the Llano River this weekend, we found plenty of eggs and caterpillars upon making our milkweed rounds.   Three Monarchs, four Queens were spotted in flight.  Swamp Milkweed stands of Asclepias incarnata are numerous but thin, and we even found one egg on Antelope Horns milkweed, Asclepias asperula. 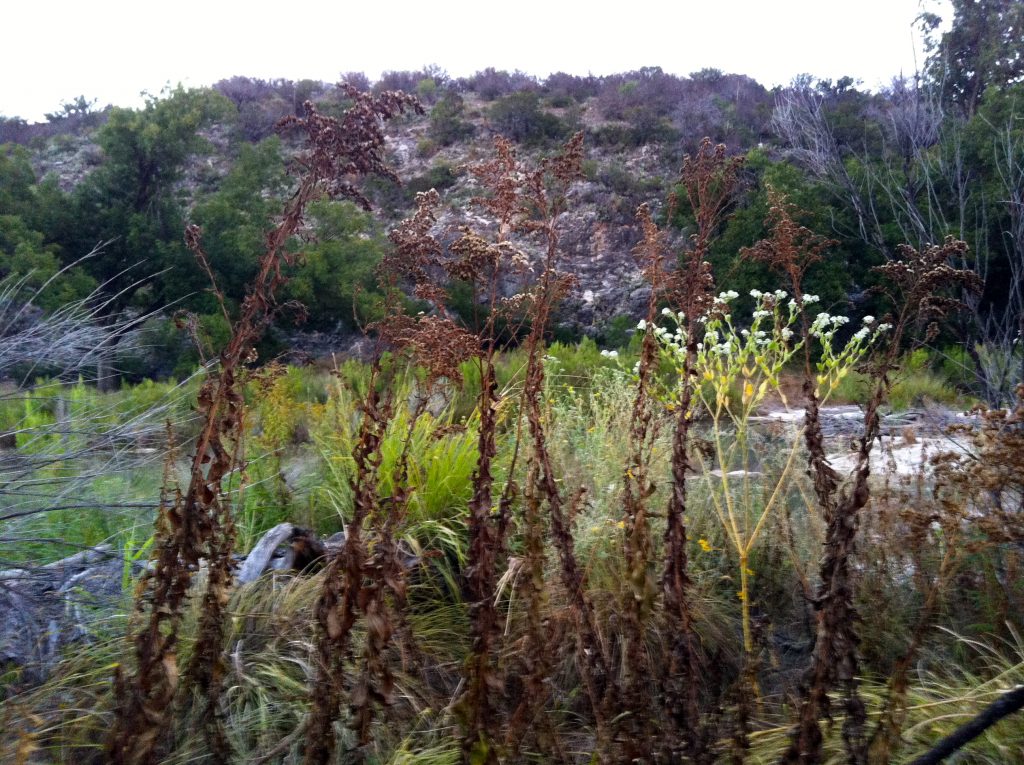 This parched Goldenrod on the Llano River will serve no use to migrating Monarch butterflies except as a place to rest.

Frostweed, a Monarch butterfly mainstay in the fall with its puffs of white flowers, is just starting to bloom.  Goldenrod is still pervasive, but fading.  The timing is excellent for good nectar possibilities a month from now, October 10-22,  when Monarch Watch predicts peak Monarch Migration for latitude 29, which is San Antonio.  Austin, at latitude 30, would be around the same. 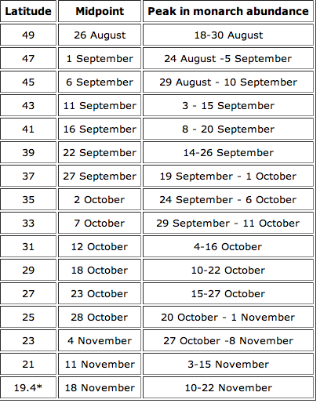 Peak migration for San Antonio is predicted to be October 10 -18 according to Monarch Watch. Screengrab and info via Monarch Watch.org

My Monarch Watch tags arrived this week.  I had procrastinated buying them and only ordered 100 this year as I expect another dreary turnout for the migration given the myriad challenges Monarchs face. Weather seems to be cooperating and cooling off, though.
When the small troop arrives, nectar sources should be plentiful, boding a restorative rest stop as they make their way to Mexico.