So close! San Antonio 300for300 pollinator garden initiative at 245

The grass-roots effort began as a way to satisfy an action item to which San Antonio committed under the National Wildlife Federation’s Mayor’s Monarch Pledge. One of the last action items left undone in early 2018 was to launch a community wide pollinator gardening initiative.

Three-hundred pollinator habitats for San Antonio’s Tricentennial birthday year sounded ambitious, but when broken down by city council district, it seemed highly doable. The idea: just 30 people in each of San Antonio’s 10 districts would commit to creating a pollinator garden, and bingo! We’d hit our goal in no time.

To date, downtown’s District 1 leads the pack with 52 gardens. But since butterflies know no walls, we’ve also allowed participation outside the Alamo City–to include San Antonio’s myriad incorporated townships and neighbors, as well a gardens as far away as Roundrock, Texas.

Here’s how the districts and folks outside town shake out:

Check out the map below to see the full extent of 300for300.

Linda Sierra in District 2 became the first person to commit to a pollinator habitat. She pledged the premiere garden on April 3. The most recent pledgee, Eileen Egan in District 9, signed up November 24. 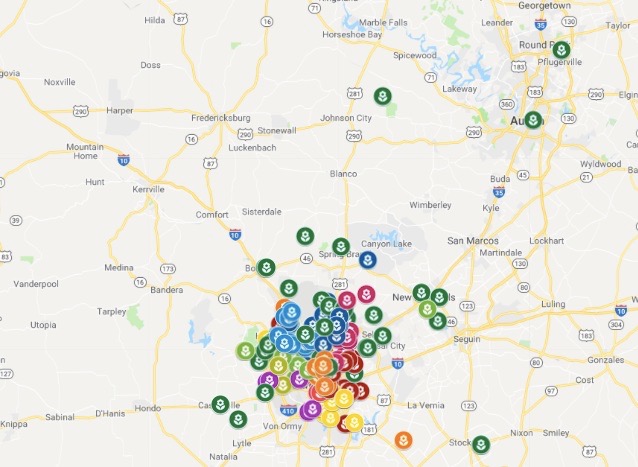 Click on the map to get a live rendition of the 300for300 pollinator habitats committed.

Last week, our friends at San Antonio Water Services, known locally as SAWS, helped boost awareness with a feature story on the 300for300 Initiative in their GardenstyleSA newsletter. A dozen folks signed up.

Recent promotional efforts now have us at 245 gardens–so close! But we need YOUR help to reach 300.

If you’ve already signed up and pledged to plant a pollinator habitat, thank you!  Please recruit like-minded friends to do the same. And if you haven’t signed up for our 300for300 pollinator challenge, what are you waiting for? Surely you want butterflies in your yard this spring.

Pollinator gardens embody beauty, function, sustainability and education, all in one small space. They provide valuable shelter and food supplies for our local pollinators, the ecosystem workers that make one of every three bites of our food possible at a time when insects of all species are in steep decline. Once established, they’re less work than traditional turf lawns.

They also help educate people on the critical role these pollinators play in our lives while conserving water, limiting chemical use and improving the ecosystem.

One more thing: if you’re so inclined, consider one of our pollinator habitat signs to educate neighbors on pollinator advocacy. Might make a great holiday gift for some special gardener someone in your life, too.

Together, we can reach our Tricentennial goal of creating 300 pollinator gardens for San Antonio’s 300th birthday, while also making positive change in our landscapes.

Again, to everyone who already pledged and planted, thank you for your participation. Feel free to share photos of your garden on the Texas Butterfly Ranch Facebook page.