Migration studies expert Andy Davis sometimes finds himself at odds with the running narrative of the monarch butterfly migration.

Davis, a research scientist in the University of Georgia Odum School of Ecology, specializes in conservation physiology, a developing field that examines how environments effect the physiology of animals and how that knowledge might inform conservation management decisions. He started his scientific career studying songbird migrations, but then he met his wife, Sonia Altizer. She’s one of the foremost experts in the world on the monarch-centric disease, Ophryocystis elektroscirrha, commonly known as OE. Since, Davis has developed a special interest in the monarch migration and now focuses his research almost exclusively on the iconic insects. 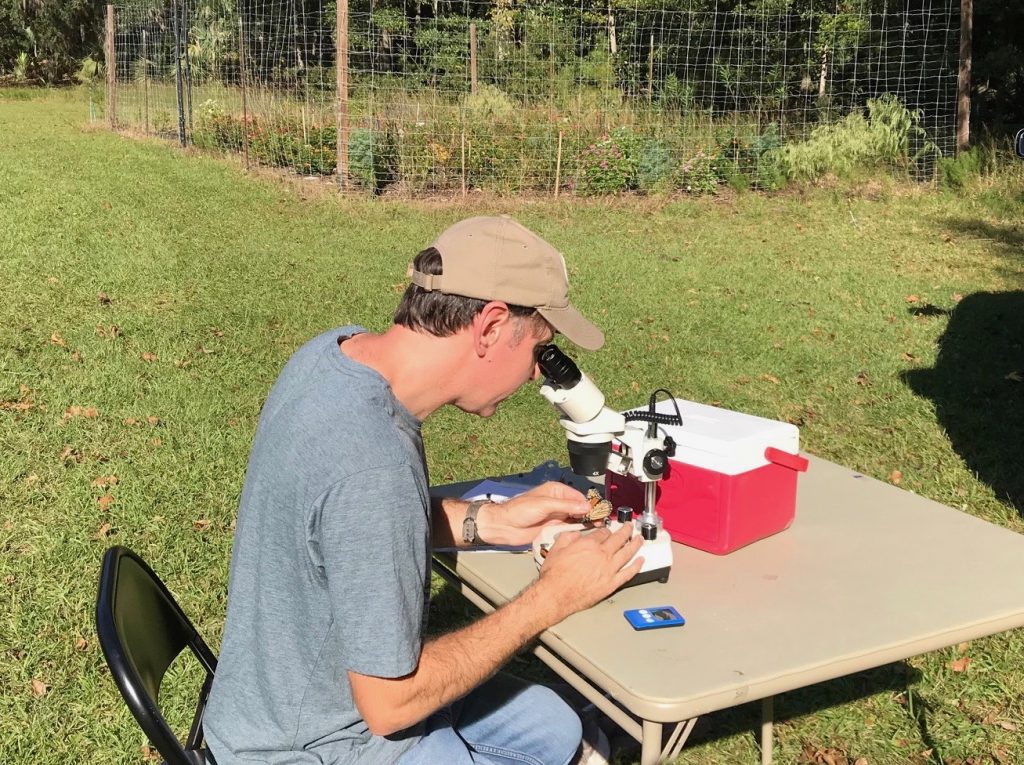 Not surprisingly, he found that monarch caterpillars exposed to the deafening sound of high-speed traffic experienced increased stress. In some cases, the caterpillars exhibit aggressive behavior, fighting with each other and even biting the fingers of researchers. The finding led Davis to question the conventional conservation wisdom of planting milkweed and pollinator habitats along high-speed highways.

Davis also challenges the popular conviction that monarch conservation is all about planting more milkweed, the butterflies’ host plant. While habitat is important, he and others argue that “it’s the migration itself” that is most challenging for the insects.

Davis lays out these arguments in his über useful MonarchScience blog, where he translates academic papers into layperson’s terms for the average reader. He’s also served as Editor-in-Chief of Animal Migration, the first scientific journal devoted to the migration of animals, since 2014. The open access publication is published quarterly by de Gruyter.

“The numbers [of monarchs] we see in Mexico are kind of meaningless,” said Davis in a recent interview, adding that studies over the last five years have shown that no long-term decline of breeding monarchs exists in eastern North America, yet smaller and smaller numbers of monarchs are reaching the overwintering sites. “The logical inference is that the migration must be getting harder, resulting in lower migration success.”

Here’s a few questions we posed to Davis. 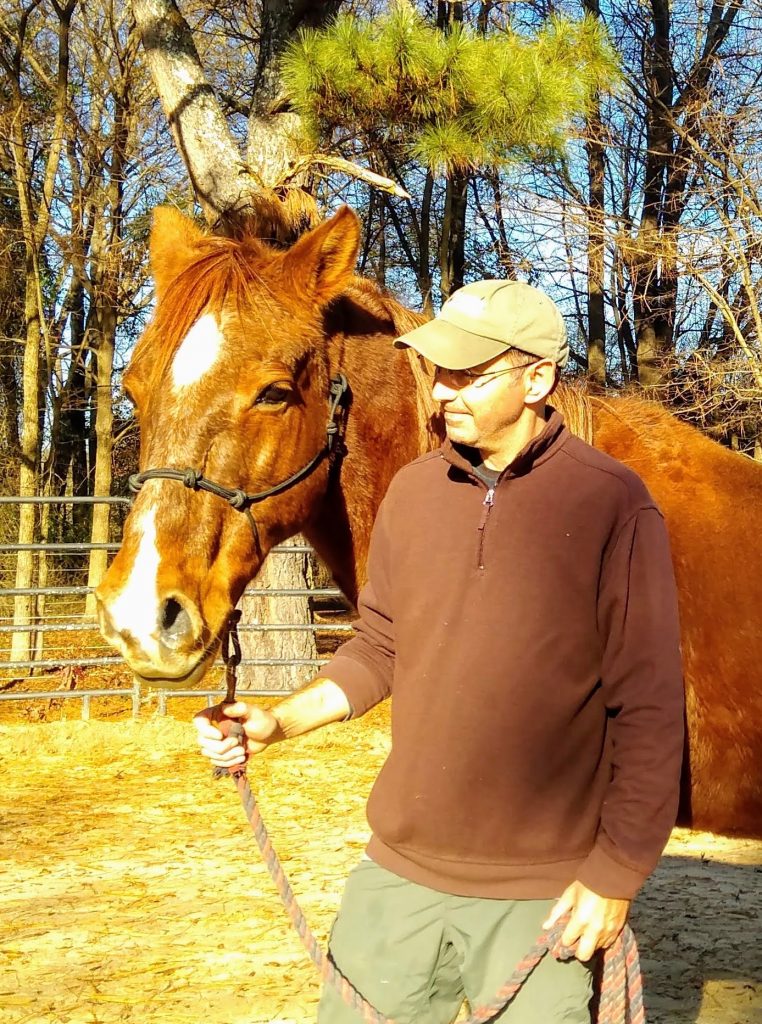 1. As a migration expert, you study migrations of all kinds of creatures. What are the common themes of migration, and what is it about the monarchs, other than their storied multi-generation journey that stands out?

Davis: The thing that is common to most migrations, whether you’re talking about a bird, butterfly, dragonfly, or whatever, is that they are hard! These journeys are all incredibly risky, and they are fraught with danger for the travelers.

So many of the migrants never survive the trip, especially if it’s a long-distance journey, like the monarchs. It makes one wonder why they do it in the first place. But on the flip side, these journeys allow the species to exploit a wide variety of resources at different places and in different seasons. A resident animal is basically stuck with the resources where it lives. So this means that the travelers must be adept at using a wide variety of habitats.

2. What Darwinian purpose do migrations serve? Are they ephemeral?

Davis: Using the word Darwinian is appropriate here, because migrations are a perfect example of “survival of the fittest”. Migrations, especially the very long-distance ones, are what we call a “selective episode” in the lives of migratory animals.

That means that those individuals that can’t make the trip are removed from the population, and they don’t pass on their genes to the next generation. This happens with monarchs every fall – the trip south to Mexico is so long and so hard that only those that are the strongest survive and reach the overwintering sites. Actually, it’s probably more appropriate to call it “survival of the biggest” when it comes to the monarch migration.

We know that monarchs in the eastern N. American population are the largest of all the global populations, and it’s probably because of this annual removal of small, less fit, individuals. This same thing happens each year with the OE-infected individuals. Those monarchs that attempt to migrate while infected usually don’t make it, and so are removed from the population (natural selection). This is why the eastern population has a low infection rate (at the overwintering sites, anyway).

3. Is there a point in a creature’s evolution at which migration doesn’t make sense anymore? Are there examples of this in natural history beyond man-induced situations like the passenger pigeon?

Davis: With global climate change now upon us, there are many examples in the animal kingdom where species that were once migratory are showing signs of a diminishing, lessened, or a complete loss of their once spectacular migration.

Just a couple years ago, a paper was published in the journal I edit (Animal Migration), where researchers showed how the American Robin has been slowly reducing its migration in North America. So the monarch’s shrinking migration in North America is not unique. Whether that means the migrations “don’t make sense anymore” is a tricky question to answer. The migrations are changing – that much we know. One could argue that this is a “response” to climate change, and even an adaptation to the changing conditions.

4. Many monarch butterfly enthusiasts feel that humanity has contributed to monarch butterfly decline and thus attempt to “fix” the problem by releasing butterflies raised at home or through commercial breeding. You have stated that this is ill advised. Why?

Davis: I’ve heard this argument many times before, and not just from people in the monarch community. The idea that we need to “fix” a problem we caused inherently assumes that we know how to fix it. Sometimes we don’t even fully understand how we caused the problem in the first place.

There have been many examples of where we (humans) have made things worse when trying to fix a problem in nature, when we didn’t really know what we were doing. Here in Georgia and the southeast, we have an invasive ivy called kudzu that is destroying our forests and natural areas. Did you know that it was purposely brought to Georgia by (well-meaning) people who tried to use it to “control” erosion?

Regarding the monarchs, we really don’t know what the effect of rearing is, in terms of their physiology, immunity, stress-tolerance, etc.

5. You have said that we focus too much on the Mexican roosting sites in determining the health of the monarch butterfly population. Why do you think that continues?

Davis: I have a couple of reasons for this. First, in the last several years, after reviewing a lot of research, I’ve come to realize that there is so much additive mortality during the migration to Mexico (up to 70%, by my estimate), plus all of the new research showing how a lot of monarchs either drop out of the migration, or simply travel elsewhere, that the numbers that we see in Mexico are probably only a tiny fraction of the breeding population.

Second, I’ve also been critically re-evaluating some of the very early research on the Mexican overwintering colony discovery and then the science from shortly after that. From what I can tell, there was a critical assumption made very early on that these colonies represented the “entirety” of the population. This was justified at the time, since all of the tagging data pointed to this one region, plus Lincoln Brower had tried (and failed) to find other colonies nearby. But the fact that this was the only known site does not mean they all safely arrived there (recall my earlier comments). It only means this is the site they all attempted to reach. There is a difference. 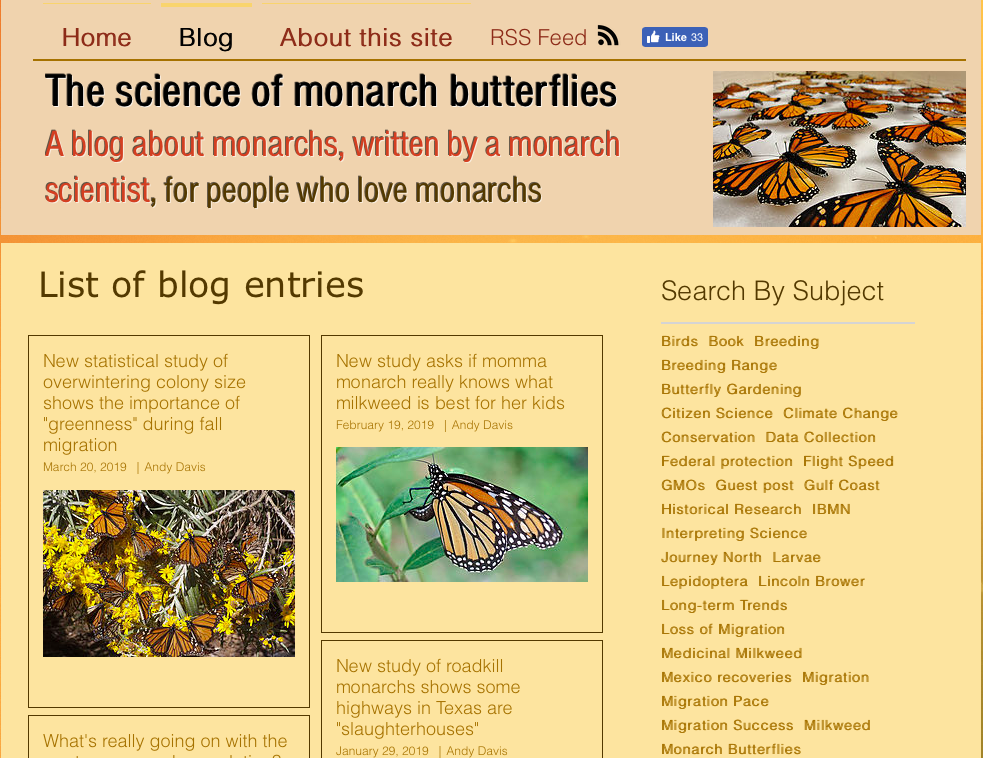 Andy Davis’ MonarchScience blog is a must read for monarch butterfly fans.

6. Four years ago, you started the MonarchScience blog. Why was that?

Davis: I had been growing very concerned at the gradual erosion of scientific literacy in this country and elsewhere, plus the loss of legitimate, investigative reporting in the media, on all science matters, not just with monarch issues. Most newspapers don’t even have a science journalist on staff these days. At the same time, I’ve been growing concerned at the fact that the science (around monarchs) is not reaching the people who most need to hear it, such as those who have boots on the ground, so to speak.

A lot of these folks aren’t trained as scientists, nor do they even read the scientific journals (why would they?). Plus, a lot of journals keep their content locked away unless you pay a fee. Sometimes, the scientists themselves don’t help matters much when they write very complex papers filled with jargon and stats. I wouldn’t blame regular people for not wanting to read some of these papers. So, it seems that there was a conflagration of unfortunate things happening – decline in science journalism, increasingly complex papers, and a greater number of non-scientists involved in monarch conservation. I started MonarchScience in response to all of this. It was always my hope that this would be a place where everyday people could log in and hear about the latest science in everyday language. I wanted to make the science around monarchs accessible.

7. Are you hopeful about the future of the monarch migration? Why or why not?

Davis: As a scientist, I try to be objective about the monarchs, and their migration. So I guess you could say I’m not  “hoping” for anything – whether the migration ceases or it continues, my only hope is that we are able to effectively document it and study its changes. Once a scientist begins to hope their data or observations will show a desired outcome, then they are no longer objective.

I will say though that if the monarch migration in North America ceases, the monarch will not go extinct by any means. But, it will not be pretty either. Recall that the migration acts to keep the entire population healthy. Non-migratory populations tend to be heavily infected with OE. It’s not hard to put two and two together here…