We’ve all read her bulletins.  From the appearance of the first eggs in March and April to the massive wave of Monarchs pulsing through the Texas funnel in the fall, Elizabeth Howard, 60, keeps Monarch butterfly aficionados apprised of the whereabouts and status of our favorite migrating butterfly.
In 1994, the educator, conservationist, and citizen scientist pioneer founded Journey North, a website and program funded by Annenberg Learner, a division of the Annenberg Foundation devoted to advancing excellent teaching in American schools.  The site offers an app, tracking maps, teaching and curriculum tips, and the call to “Go outside. Explore your own backyard. Get ready to share what you see!” 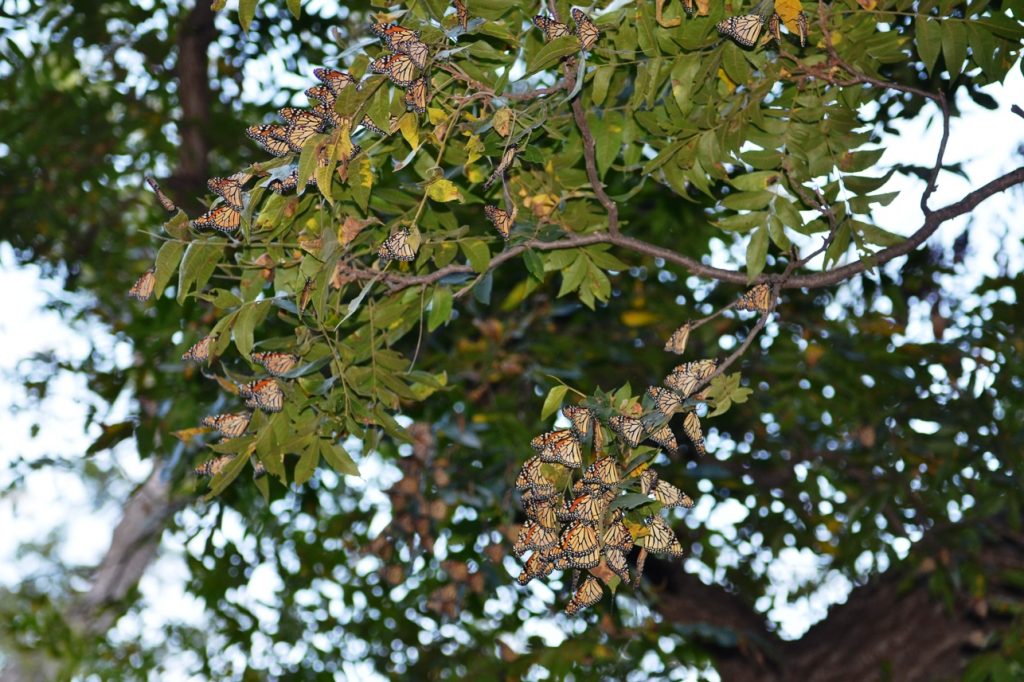 Journey North has embraced that creed for decades, engaging 60,000 students, citizen scientists, and naturalists of all ages in tracking seasonal change and wildlife migrations around the world–Monarchs, hummingbirds, whales, eagles and others.  The program encourages people to report sightings of eggs, caterpillars and adults through its website or via the Journey North app.
Howard directs the effort with a fluctuating staff of up to six during peak season from her office in Vermont.  Each week during migration season she spends a day and a half crafting the Thursday Monarch butterfly migration bulletins.  The most time-consuming part, she says, is managing the data which is expertly done by her Journey North colleague, Cindy Schmid.
“With a gentle push from the north wind, the migration began to flow into Texas this week,” wrote Howard in the October 8 newsletter.  “The average roost-size in Texas has been 1,000 Monarchs so far, and numbers should build to peak over the coming week.”
I’ve admired Howard from afar for years, impressed by her relatively early embrace of technology in the service of nature. The celebration of all things tech sometimes seems to steamroll the importance of the natural world.
Trained as a biologist, Howard holds special status as a citizen scientist and advocate.
“I consider myself a citizen scientist — and also a ‘real scientist.’” she said via email. “I’m someone who has learned on the job (and I’m secretly proud of that). I think it’s great that the scientific field can make room for people who take the route I have; experience must be at least as valuable as advanced degrees.”

That attitude has afforded her special stature with many of us. When Howard speaks, citizen scientists listen.
Her newsletter’s recent inclusion of a press release announcing a statement authored by 10 scientists discouraging the purchase of commercially bred butterflies for fear of unleashing the debilitating Ophryocystis elektroscirrha (OE) spore on the wild population gave many of us pause.
Under the headline, “Concern about Monarch releases,” Howard included the press release with a link to the statement accompanied by a quote from Sarina Jepsen, Endangered Species Program Director of The Xerces Society in her weekly newsletter.
“Breeding and releasing monarchs might seem like a harmless activity, something that might even help struggling populations. Unfortunately, the practice holds the potential to actually harm wild monarchs and disrupt research that is critical to their conservation,” said Jepsen.
The Xerces Society, along with the Center for Biological Diversity and Dr. Lincoln Brower, submitted the petition last August to list the Monarch butterfly as “threatened” under the Endangered Species Act.
Howard touches on that and more, below.
1. How did you arrive at the notion of crowdsourcing information about the Monarch butterfly and other migrations?
As a winter-worn resident of the northern US, waiting for spring was always a challenge. Toward the end of winter, I’d follow bird migrations by listening to ‘rare bird alerts’ from the states to my south. (At the time, bird sightings were compiled on telephone answering
machines.) So, when I heard about ‘the internet’ — and how it could connect people — it struck me immediately that the technology could be used to track migrations. I actually remember the instant the idea occurred to me; I pictured a map with lights turning on as migrants arrived successively across the landscape.
2. When you started Journey North in 1994, that was extremely early Internet. Obviously, much has changed since then, but what has been the most astounding or impressive change in the technology and in citizen science?
What’s been most impressive is the pace of change. When we began in 1994 e-mail was new and there was no web. Now we have images, voice, video, social media, apps, ever-increasing band-width and immediate access to people across the planet. I love having had a job that incorporates these advancements so closely and directly. Truly, not a week goes by where we don’t see new and creative applications – and we can build them right into our work.
As for citizen science, I’m still impressed that we can track butterflies across the continent simply by sharing sightings and that the information is so valuable. For example, we now know that even weekly differences in spring temperatures can impact the subsequent size of that year’s population. Who knew?
3. Are you generally optimistic or pessimistic about the future of the Monarch butterfly migration? Do you think your great-grandchildren will experience it?
I guess I’m optimistic in the short-term but I hate to think about the long-term because conservation work is going to get even harder. The pace of habitat destruction is projected to accelerate and, on top of that, there’s climate change. At a recent meeting scientists were grappling to determine the migration’s “extinction threshold.” We know we’re flirting with it and we don’t know the tipping point.
What’s heartening is the outpouring of support for Monarchs. If people decide it’s important, maybe we can save them
.
4. The Monarch butterfly community has been “aflutter” about the possibility of the Monarch’s possible listing as “threatened” under the Endangered Species Act. Where do you come down on this?
If this is what it will take to protect the Monarch migration, I’m all for it. However, I do have questions about how and whether this approach would work.
For example, a landowner might rid his/her property of milkweed out of concern that he/she won’t be allowed to do so later. Any regulation should be written so we can learn as we go and make sure unintended consequences don’t make matters worse.
5. You told me via email once that your favorite migrating creature is a toss-up between hummingbirds and Monarchs. Do you still feel that way, and if so, what is it about one or the other that is most interesting? Also, which species garners the most attention/views on the Journey North site? ( I bet I know the answer to that one.)
That’s right, I can’t choose. Monarchs are perhaps more awe-inspiring; I mean, how DO they migrate to a place they’ve never been? But we can experience hummingbirds on a more individual, personal level. I love their chutzpah; they’re so much fun to have around. Plus, they make me laugh which a Monarch never has.
Hummingbirds surpass Monarch in popularity on Journey North and that fits. Google “hummingbird” and you’ll get 31 million hits compared to the Monarch’s meager 1 million.

Howard is most proud of engaging future citizen scientists like these boys discovering some Monarch eggs on milkweed. –Photo via Journey North

6. What is your proudest moment as the founder of Journey North?
I’m proud that Journey North provides such an easy entry point to citizen science, and that we have brought so many people into the fold. We now have 60,000 participants spread across Canada, the US, and Mexico. People are telling the Monarch’s story, right down to those who live near the sanctuaries in Mexico and announce the butterflies’ arrival. How neat is that?
7. You recently issued a news release discouraging people from buying Monarch butterflies in any form from mass breeders for release in the wild. Do you honestly think that commercial butterfly breeders have no place in Monarch conservation?
In my view, this is about what the monarchs need — we have to put their needs first. The surest way to help monarchs is to provide healthy habitat and leave the breeding to them. If nature’s taught us any lesson it’s that ecological systems are always more complex that we expect. Think of the pictures of millions of monarchs overwintering together — having come from across the continent — and then imagine some carrying a communicable disease. There’s so much we don’t know. I don’t think we can be too cautious.
Related posts: