None of us who care about Monarch butterflies can ever forget the image of the beautiful, intrepid young woman busting through a wall of Monarch butterflies on the cover of the August 1976 National Geographic Magazine. “Discovered:  the Monarchs’ Mexican Haven,” read the headline.

The woman, Catalina Trail, known as Cathy Aguado at the time, lives in Austin, Texas. She and her husband Ken Brugger were the first westerners to “discover” the Monarch butterfly roosting sites.  Before meeting Trail, I would sometimes gaze at the cover photo and wonder:  Wow, who is she? What was she thinking? She’s so lucky.

In the summer of 2012, I had the opportunity to meet Trail.  She reached out to me here at the Texas Butterfly Ranch.  I was astounded she lived 75 miles up the road from me and told her so.  Would she agree to an interview?   She did. Over several weeks, we met, talked by phone and corresponded by email.
The untold story of her role in discovering the Monarch butterfly roosting sites posted on July 10, 2012.  We have stayed in touch.

For various reasons, Trail parked her interest in Monarchs and role in the discovery of their roosting grounds shortly after the news went public in the summer of 1976. “My priorities were elsewhere at the time,” she said, adding that she also was disappointed in how the story was being told.  But when the Canadian producers of Flight of the Butterflies tracked her down via private investigator to work as a consultant on the making of their IMAX film in early 2012, she felt the need to re-engage–perhaps to set the record straight.

Much has changed in the three years since.  The Monarch butterfly has attained status as the poster child for pollinators.  And Trail has become a Monarch butterfly celebrity.  Shy, thoughtful, soft-spoken and unassuming, she typically shuns the limelight but makes occasional appearances on behalf of Monarchs and pollinators. 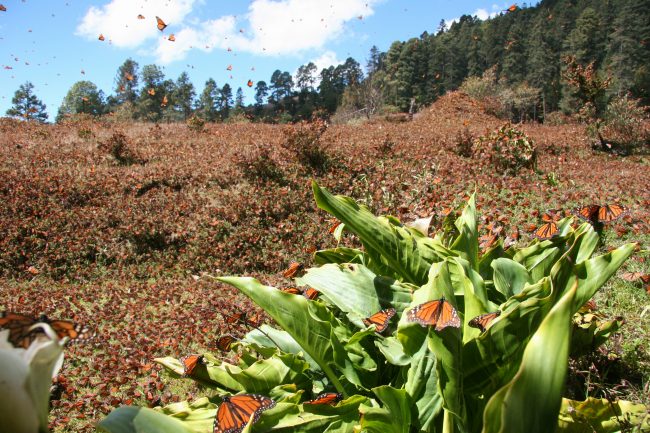 Trail will appear at the upcoming Pollinator Powwow in Kerrville this Sunday and will also be on hand at a FREE screening of the Flight of the Butterflies organized by the National Wildlife Federation at the Mexican American Cultural Center in Austin September 30.

Trail and I shared a bahn mi sandwich and caught up at a favorite Austin eatery recently.  Here’s what she had to say.

Q. How has your life changed since you “came out” as the person who discovered the Monarch butterfly roosting sites?  And what are the best and worst parts about your newfound fame?

Trail: Since it became known that I was instrumental in the discovery of The Monarch overwintering sites in Mexico, my life has changed only in that the discovery story has been told in a way that is closer to the truth.

I have been acknowledged by SK films of Canada with the release of the film Flight of the Butterflies, and, of course, Monika Maeckle who wrote the first article in this country about my role in the discovery of the Monarch Overwintering Sanctuaries.  Many more people have recognized my work in the discovery and that lead to receiving The 2012 Gold Medal Award “Jose Maria Luis Mora” presented to me by the government of The State of Mexico for “relevant and eminent merits and conduct of notable service to humanity, Mexico, and The State of Mexico” which lead to the conservation of the Monarch Butterfly. 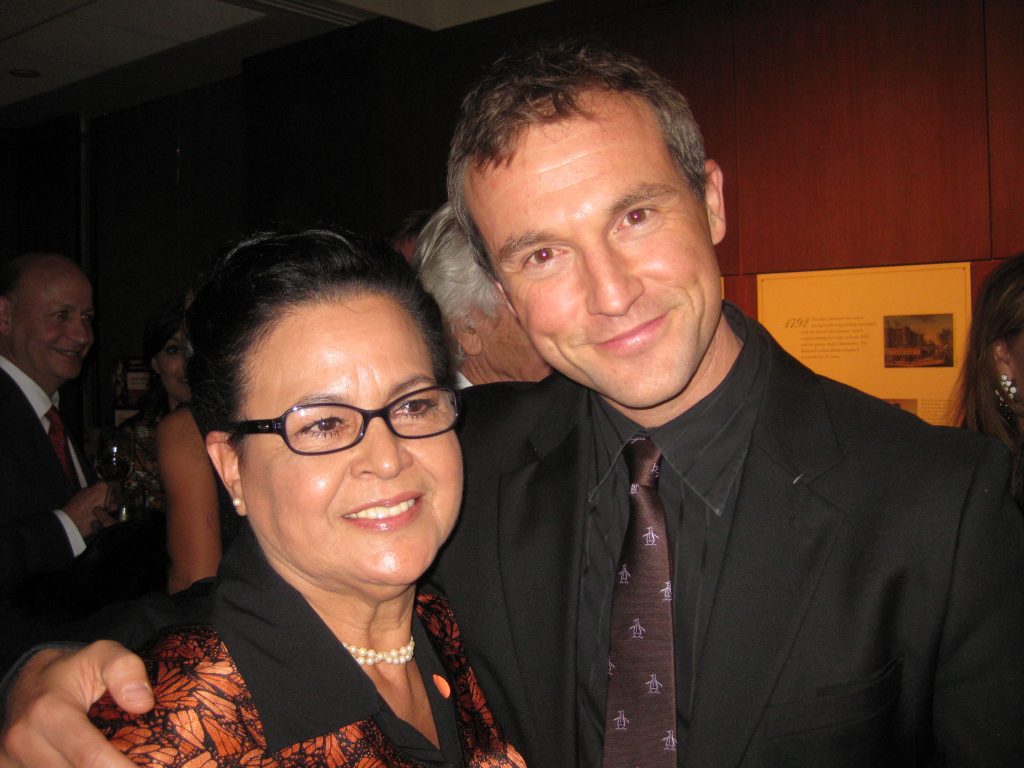 Catalina Trail with Shaun Benson, the actor who played the role of her husband Ken Brugger in the IMAX movie Flight of the Butterflies. Photo by Catalina Trail

The best part of being recognized is meeting people, especially children, who are passionate about the life cycle of the Monarch Butterfly, their epic migration, and their fascinating behavior. Another important part is also being able to participate in the story and let the World know that in the early 1970’s in Rural Mexico a young woman was looking to the sky and was doing fantastic things. The worst things about being known are that people wonder where I was for 38 years and why I did not participate in Monarch conservation activities. I hope to answer those questions in the future.

Q. Do you feel that your role in Monarch butterfly history has been fairly and accurately portrayed?

Trail: Since the beginning, my role in Monarch butterfly history was unfairly and inaccurately portrayed.  We’re getting closer. The current version is more accurate but so many decades have a way of eroding the truth.

Q. What has been the most exciting/rewarding thing to come out of your debut as the woman who led the expedition to the roosting spots?

Trail: The most exciting and rewarding thing is the realization that the truth still matters and that we as human beings appear to have an inherent need for honesty and truth in all aspects of our lives. Of course, it is also rewarding to be placed back where I belong in the discovery story of the Monarch butterfly overwintering home and not be seen only as the young woman on the magazine cover.

Q: You told me a few years ago that you were back at the roosting sites in 2012. Have you been since then? If so, what were your impressions? If not, why not, and do you have any desire to return there? 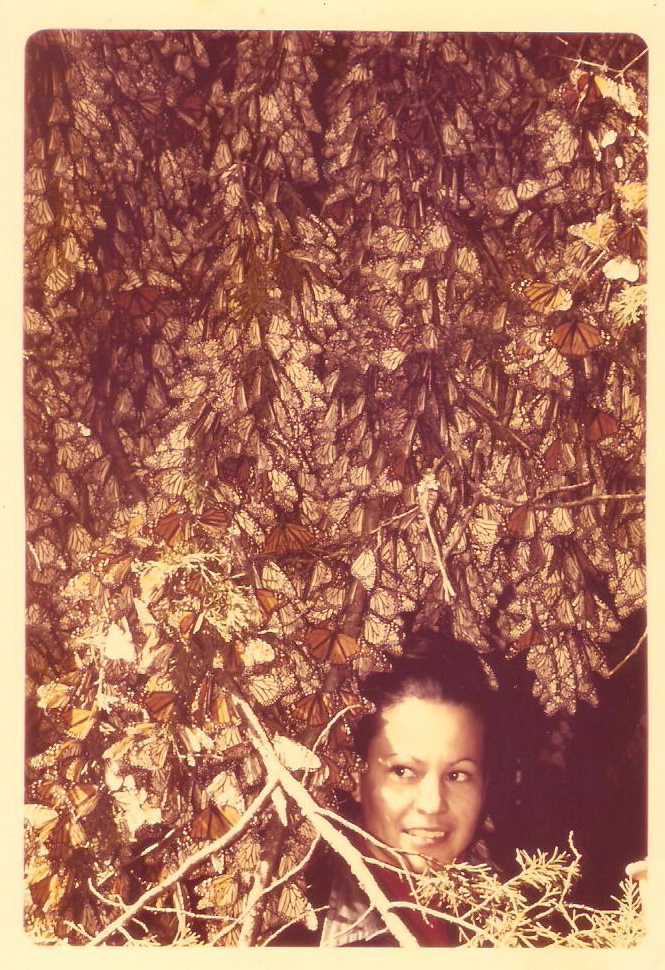 My desire to return to the sites to see the Monarchs is so strong that it overwhelms me every year when I see them going south. I find myself talking to them like a fool and wishing aloud that I could take to the sky and fly with them to spend the winter in their amazing company.

Q: What are you doing these days, and what would you like people to know about you that they don’t already know?

Trail: These days, I spend my time at home growing vegetables, reading, looking up to the heavens, and making my yard more attractive for pollinators. Since I quit my job, I joined a gardening club and I am also beginning to attend Monarch butterfly and or pollinator related events with hope of becoming more active in conservation efforts.

What I would like people to know about me is that I spend a lot of time thinking about and admiring life in general.  I choose to not consume any animal products due to my affection and empathy with their struggles for survival. More important, I want people to know that I have great admiration for the superior human intelligence–especially when it is coupled with the ability to respect and see oneself as no more or no less than the (lesser) creatures living with us on this beautiful earth.