The U.S. Fish and Wildlife Service (USFWS) and University of Illinois-Chicago announced what’s being billed as the largest agency-industry agreement to boost pollinator habitat in our nation’s history earlier this month.

More than 40 energy and transportation companies in the U.S. that control millions of acres of habitat through oil and gas pipeline and utility rights-of-way (ROW), worked together to create the Candidate Conservation Agreement with Assurances (CCAA), said Iris Caldwell, of the University of Ilinois-Chicago Energy Resource Center, who will manage the project.

No other CCAA has ever included all 48 states, said Caldwell. “We envision most of the partners who helped to develop the agreement will sign on,” she said, adding that 20 organizations are currently undergoing the application process.

The voluntary agreement commits them to adopt best practices that boost pollinator habitat, minimize herbicides, use local native seed mixes and monitor habitat for quantity and quality. In exchange for their commitment to the CCAA, participating property owners receive assurances that no additional conservation measures will be imposed if the monarch butterfly is listed under the Endangered Species Act (ESA) later this year.

In August of 2014, the monarch butterfly was submitted for consideration as “threatened” under the Endangered Species Act. Four months later, USFWS found such a listing might be warranted, and initiated a status review of the species. The Service then failed to rule on the petition by the statutory 12-month deadline, and in July of 2016, a Washington, D.C court awarded the USFWS three more years. In June of last year, USFWS delayed the decision another 18 months. A decision is expected in December of this year. 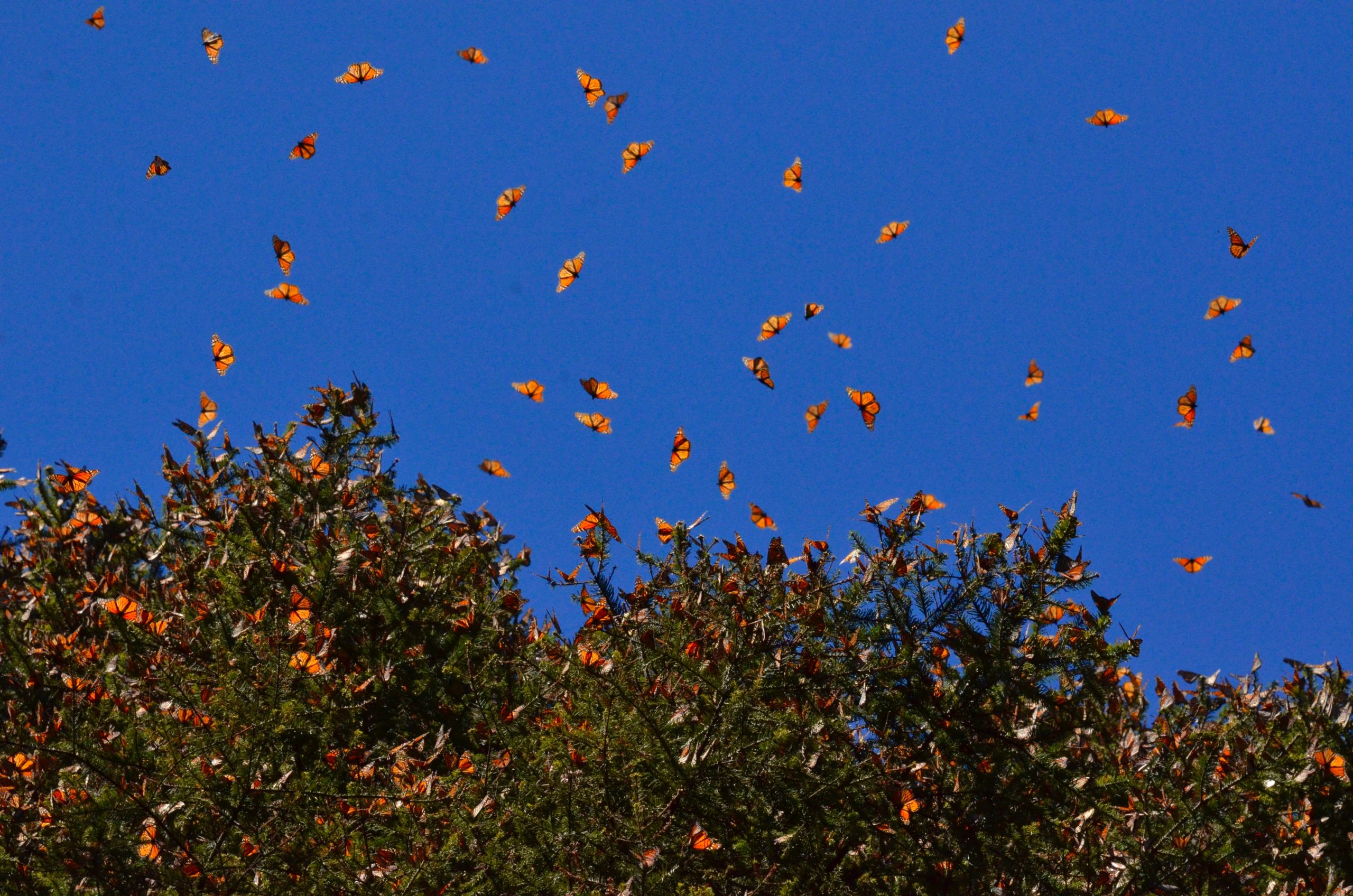 Monarch butterflies flush from Oyamel trees in the mountains of Mexico in early 2020. Photo by Verónica Prida

“The purpose of CCAAs is to conduct conservation before a species needs to be listed and to potentially preclude the need to list,” said  Georgia Parham of U.S. Fish and Wildlife Service, adding that when USFWS makes their decision on whether or not to list the monarch, “agreements like this, and other efforts, will be considered.”

“If it results in millions of acres of monarch habitat, I think that’s a good thing,” said Lee Marlowe, president of the San Antonio Native Plant Society and an ecological restorationist for the San Antonio River Authority. San Antonio, Texas, which sits in the migratory pathway known as the “Texas Funnel,” was named the nation’s first Monarch Butterfly Champion City in 2015.

“Yes, this is a promising development,” said Chip Taylor, founder of Monarch Watch, a monarch butterfly conservation initiative based at the University of Kansas at Lawrence. “The task ahead is large…. Protecting ROW landscapes which constitute habitats for monarchs, pollinators, and other wildlife has to be part of that process.” 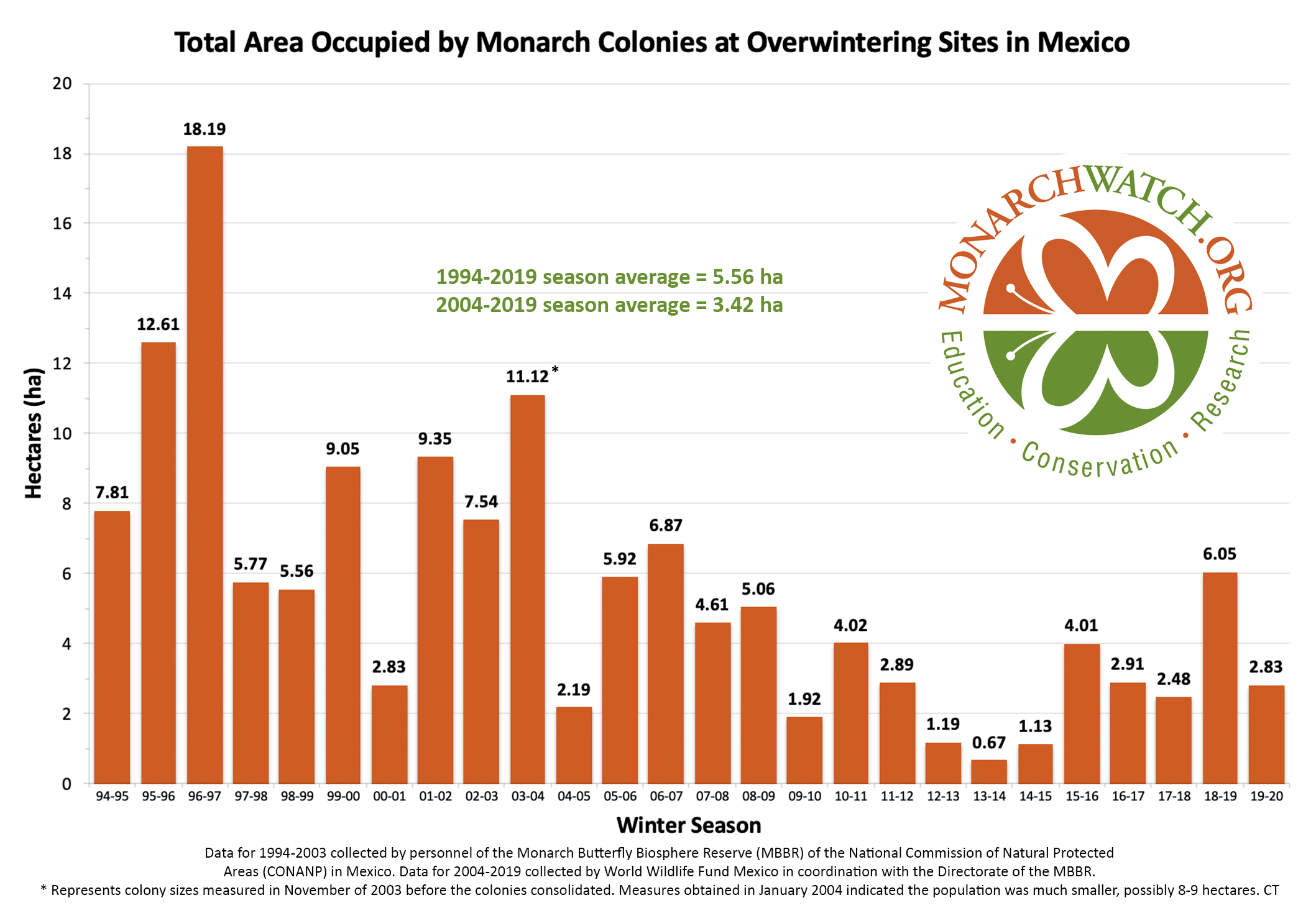 Monarch population status. Scientists most recently are using a “mean formula” of 21.1 million butterflies per hectare. Chart via Monarch Watch

Tara Cornelisse, a scientist and entomologist at the Center for Biological Diversity, one of the several entities that submitted the ESA petition in 2014, took issue with the CCAA. “While this agreement is a step in the right direction, conservation measures need to be implemented on a wider scale than it requires,” Cornelisse told Bloomberg Law.

When the first Earth Day took place 50 years ago, the monarch butterfly overwintering sites had not yet been “discovered” by western scientists. Their annual migration from Canada through the U.S. to Mexico and back over multiple generations was not completely understood.

Canadian entomologist Fred Urquhart and his wife Nora had been studying the butterflies for decades, tracking them with the first versions of crude tags and the help of volunteers throughout the hemisphere.

It was an adventurous Mexicana and her North American husband who actually located the monarchs’ overwintering sites on January 2, 1975. With guidance from the Urquharts, Catalina Trail, known at the time as Cathy Aguado, and her husband Kenneth Brugger, explored the high altitude mountains west of Mexico City for two years before finding the monarchs’ overwintering sites. National Geographic Magazine announced the news in their August,1976 issue: “Discovered: the monarchs Mexican haven.”

Back then, more than a BILLION monarch butterflies likely populated the high altitude roosts in the mountains west of Mexico City.

In response, Mexico and UNESCO instituted the Monarch Butterfly Biosphere Reserve, a system of Mexican preserves meant to preserve the butterflies’ roosting sites. An imperfect system of counting the monarchs’ population was developed. Thousands of studies have been conducted, making the monarch the second most studied insect in the world, after bees. Citizen scientist organizations like Monarch Watch, Journey North and Monarch Joint Venture engaged the public.

In 2014, following a drastic drop in the monarch population, The Center for Biological Diversity and others submitted the ESA petition to list monarchs. In 2015, President Obama issued the first national pollinator strategy, and First Lady Michelle planted the first-ever pollinator garden at the White House. Myriad conservation organizations latched onto the monarch as the “poster child for climate change,” promoting habitat restoration and the embrace of milkweeds.

Forty-five years later, the migratory monarch butterfly population numbers about 60 million, according to the most recent “mean factor” formula of 21.1 butterflies x 2.83 hectares. The California monarch population, a separate demographic from those east of the Rocky Mountains that migrate to Mexico, totaled 4.5 million in the 1980s. Last year, they numbered an estimated 29,000.

“It’s real enough progress,” said Beryl Armstrong, a partner in Austin-based Plateau Land and Wildlife Management, of the CCAA. For decades, Armstrong has worked with private landowners on ESA mitigation and conservation of rare and endangered species. He described himself as a “radical centrist.”

“It’s always better for two parties to agree than to chase people around with a stick and try to make them do stuff,” said Armstrong. “The only way we’re ever gonna get a lot of this stuff done is by working with industries that are willing to cooperate.”

According to Bloomberg Law’s environment and energy report, 51 other such CCAA agreements have been struck nationwide since 2000. Such agreements have been fashioned to conserve the Rio Grande cutthroat trout, Gunnison sage-grouse, and the greater sage-grouse, among other species. Bloomberg categorized the CCAAs as voluntary arrangements that create public-private partnerships that can move conservation forward without the litigious and costly consequences often associated with Endangered Species Act enforcement.

A partial list provided by USFWS of companies and agencies participating in the CCAA are listed below.