Just off Buckhorn Road near McAllister Park, not far from the tarmac where millions of travelers take flight each year, Larry Gilbert pumped his smoker. The beekeeper wore a protective veil and jacket to perform the first inspection of two newly installed beehives that grace a plot in the 2,600-plus acres surrounding the San Antonio Airport.

A Southwest Airlines jet soared in the bright blue sky. Does the roar of the engines bother the bees? 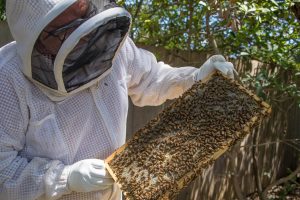 “They don’t seem to mind it,” said Gilbert, pulling a frame from the hive for inspection.

Installed just three weeks ago for Earth Day, the hives represent an initiative launched as SATBeekind, but which is now known as BEESAT.

The program aims to cultivate bees and other pollinators on airport property, educate the community about their importance, and harvest and sell honey at airport restaurants and stores.

The apiary initiative coincides with the arrival from Chicago of David Robbins, the airport’s new assistant director and chief development officer.

Robbins pulled up to the hive check in a bee-colored, yellow-and-black striped SUV.

“It’s my load,” he joked, referring to the “pollen load” or bulging yellow pollen sacs forager bees are known to bring back to their hives. The yellow granules are used to feed brood, or baby bees.

Robbins, a self-described “fringe beekeeper,” led the nation’s first airport apiary initiative in his previous post at Chicago’s O’Hare International Airport before relocating to San Antonio. He said while he technically doesn’t keep bees, he’s very comfortable with them.

“BEESAT is a way for us to to partner with our community and neighbors about the imperatives of environmental stewardship,” said Robbins. “It’s putting back all that’s good for us.”

With the help of Gilbert and airport staff, the program plans to partner with schools for tours and lessons on the importance of bees. “It’s the ecology that we’re all responsible for,” said Robbins.

Eventually, Robbins foresees airport honey as an eco-friendly souvenir sold in airport gift shops. It could be used as an ingredient in barbecue sauce and infused in vinaigrette at airport restaurants, he said.

Back in Chicago, he worked with the renowned chef Rick Bayless on airport honey recipes and hopes to replicate that effort by tapping into San Antonio’s culinary scene. The Chicago airport beehive farm, started in 2011 with 28 hives, eventually morphed into a much-lauded work training program for ex-offenders. 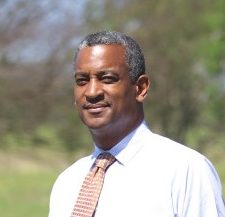 BEESAT also tackles the complex challenge of managing an airport’s landscape in an environmentally friendly way.

San Antonio’s airport borders Salado Creek to the south and sees a swarm of bees about once a month, according to airport staff. Bees swarm when they get too crowded in their hive, so roughly half the bees leave with their old queen and scout a place for a new home.

Repeated bee swarms at the airport led airport personnel to Gilbert, who works as national sales manager for a food and beverage company when he’s not tending bees at Built By Bees Resources, the beekeeping business he owns.

“I answered a post from the airport’s wildlife biologist, Marcus Machemehl, on Facebook,” Gilbert said. “He was looking for someone to remove a swarm on the tarmac.”

Gilbert explained that much of the year in San Antonio, wild bees outgrow their hives in the wild and swarm. They flee their overcrowded honeycombs and start flying.

“They live along the creek in old trees,” he said. And when they leave the Salado Creek basin near the airport, the first place they emerge is the wide open expanse of the airport’s runways.

The bees stop to rest on the first thing they encounter – a jet engine, a ladder, or a truck. The bees form a “beard,” or a cluster, hanging onto each other, surrounding and protecting their queen, as seen in this video Gilbert shared of a tarmac swarm on a ladder. Such incidents can cause flight delays at the airport.

Rather than exterminate the bees, Gilbert and airport staff decided to collect them for use in his local apiary. The idea for BEESAT had been brewing for several years, but once Robbins arrived, the idea to create an airport apiary took flight.

Landscaping at the airport also poses unique challenges. While the grounds must be attractive to visitors, BEESAT hopes to convert more planted areas to pollinator-friendly plants while avoiding plants that would attract birds. Bird strikes are a major concern for airports.

Steven Southers, the airport’s environmental manager, said the February freeze gave the airport the opportunity to reboot some of its landscaping to include more pollinator-friendly and native plants. Lantanas, roses, oleanders, and grasses will replace some of the previous garden occupants. 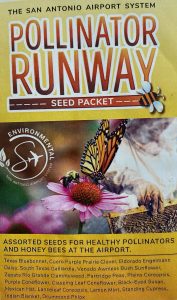 Airport staff shared a list of plants that will replace those damaged by Storm Yuri. Of the 16 species of plants listed, only one–Dwarf Yaupon Holly–is native to Texas.

“Most of the plants on the airport’s replacement list are non-native ornamentals with one species being identified as a problem in our area by Texasinvasives.org (Lantana camara confetti). It would be great if more native plants could be used as part of the replacement plan for a more sustainable and resilient landscape,” said Marlowe.

She added that the San Antonio NPSOT would be happy to work with the airport on appropriate plant selection to meet the facility’s specific needs.

“Absolutely! This is part of the lesson the bees provide,” he said.

The airport also has plans for a native wildflower field near the rental car facility. More than 200 seed packets containing an assortment of more than a dozen native wildflowers – appropriately called Pollinator Runway – have been distributed by the airport.

As for the two hives, one is progressing nicely. The other is moving a more slowly, with the queen yet to lay any eggs, said Gilbert. This suggests a weak or young queen.

“Give her some time,” he said. With plenty of flowers and good management, the airport should see five to eight gallons of airport honey by the end of this year.