Hey, Texas! Put down the chainsaws and reconsider our state’s most hated tree–the Mountain Cedar

Austin environmental planner and ecologist Elizabeth McGreevy suggests in a compelling new book that Texas landowners and ranch managers put down their chainsaws and rethink their relationship with Ashe juniper, locally known as Mountain Cedar. 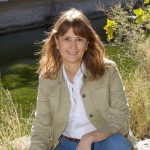 Her case for reason faces challenges. As she states in her introduction, “The Trees We Love to Hate,” emotions often run high when considering the Mountain Cedar.

“It has always amazed me to hear the snarls emitting from otherwise docile people as they denounce the trees,” she writes. “When I dispute their beliefs…people have hurled lunch bags at me, hung up on and me and mocked me during presentations. I have even been called a heretic. Never before has there been a more determined group of people than those set on eradicating a single species of tree. We have forgotten that in bygone days, the tree was held in high esteem.”

Her 578-page paperback, WANTED! Mountain Cedars, Dead and Alive, lays out the case for reconsidering Texas’ most hated tree. Using accessible language, historic black and white photographs, and hundreds of annotations and scientific citations, McGreevy dispels the myths about the maligned native juniper.

For those unaware, Ashe juniper trees, aka Mountain Cedars, cover millions of acres in Texas. The tree has been accused of being a useless, non-native, water-hogging species that competes with native grasses, forbs, and oaks to undermine the landscape. The tree is also the source of an irritating pollen that results in “cedar fever,” an affliction of allergy sufferers each fall. 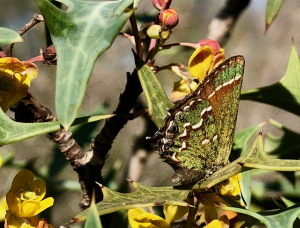 Known in Austin as “the Cedar Lady,” McGreevy taps more than two decades of contemplating Mountain Cedars to lay out their fascinating history and value.

For example, it holds great value for wildlife. The tree plays host plant to the Juniper hairstreak butterfly, Callophrys-gryneus pictured above. The endangered Golden cheeked warbler utilizes the shaggy bark of mature  Mountain cedars to build its nests. Myriad mammals and 19 species of birds consume its blue, tangy berries. In the fall, we often see migrating monarch butterflies resting in the branches of Mountain Cedars along the Llano River. And in the winter, flocks of cedar waxwings crowd Mountain Cedars’ branches, gobbling up its berries.

In early 19th century Texas, Mountain Cedars were prized as a building material for cabins, telephone poles, and railroads and helped jump start the local economy. Mature Mountain Cedars contain high levels of wood oils that make the wood resistant to decay. As a result, the mature Ashe juniper forests that once comprised large swaths of the Texas Hill Country were clear-cut to harvest the bounty.

As cattle ranching took over in the 20th century, the land was overgrazed and the soil degraded, creating a fertile context for “pioneering cedar thickets,” the ubiquitous bushy, young Mountain Cedars that we see today.

After relaying the historical context and appreciation for Mountain Cedar, McGreevy then dispels the “tall tales” of the cedar myth.

For example, contrary to popular belief, Mountain Cedars are not an invasive species. The tree has been native to Texas for millenia. Juniper pollen was found in a cave in north central Bexar County and dated to be more than 10,000 years old. The Spanish in the 1700s and the Germans in the 1800s used Mountain Cedars to build their homes, missions, and barns. 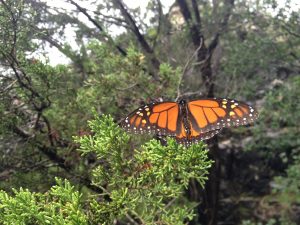 A common sight in the Texas Hill Country during monarch migration season: the butterflies rest on Ashe juniper, a.k.a. Cedar. Photo by Monika Maeckle

McGreevy also makes the case that Mountain Cedars do not cause soil erosion. Natural forces like heat, rain, and chemical reactions cause erosion, she argues, not Ashe juniper. On the contrary, mixed forests of old-growth cedar and oaks work together to build soil and provide habitat. In the karst geology of the Hill Country, even the bushy pioneering thickets reduce erosion over time by reducing rain impact and shading degraded soil.

One of the most pervasive false claims about Mountain Cedars is that they are water hogs. That claim was based on a single, imperfect study conducted in 1996 by Dr. Keith Owens at McGreevy’s alma mater, Texas A&M University. The study claimed that the typical Mountain Cedar used 33 gallons of water per day while the typical oak tree averaged 19 gallons daily.

That study caused landowners and managers to believe Mountain Cedars suck more than their fair share of water from our aquifers. The media latched on to this claim and cast Mountain Cedars as horrendous water hogs. 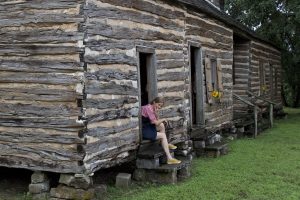 Yet the study that was the origin of this claim proved extremely flawed, even according to its author, who admitted his methodology needed refinement and that “people just wanted a quick answer to explain our water shortages.” 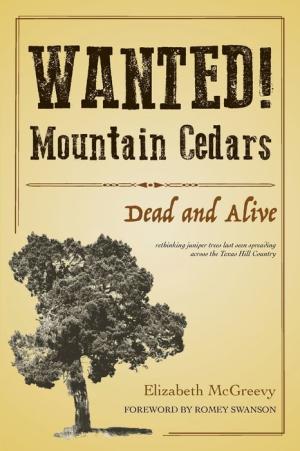 Another study revealed that Mountain Cedars actually use only about six gallons of water per day and Texas Live Oaks consistently use more water than Mountain Cedars.

McGreevy tackles more than a dozen of these myths, then suggests several strategies for finding ways to “return the value to Mountain Cedars” to offset the costs of managing the species sustainably.

Cultivating Mountain Cedar wood oil and rosin, developing a market for bonsai cedars (which can go for $5,000 a piece), and using its wood as a building material are among McGreevy’s suggestions.

Bill Neiman, founder of Native American Seed in Junction, called it a “passionate, absolutely engrossing, 20-year compilation of work” that signals a paradigm shift. Retired national resources conservation specialist Steve Nelle labeled it a “game-changer for those willing to read it with an open and reasoned mind,” but cautioned “be prepared to have some sacred cows challenged.” And Frank Davis, Hill Country Conservancy chief conservation officer, said McGreevy’s book provides a “clear-eyed perspective” about the trees’ complex ecological role in the landscape.

“You have the urban people and the rural people, and they both get frustrated about Mountain Cedars,” McGreevy said by phone recently. Urban communities struggle with cedar fever and rural landowners are told by authorities they can get more soil, water, and grass if they clear the tree, which is a “never-ending process that doesn’t work,” she said.

“They get frustrated by the misinformation and answers that don’t work, and they direct the frustration at the tree,” she added. “I’m trying to get people to stop feeling hopeless about what can be done.”

TOP PHOTO: Slash and burn the cedar has been a classic land management strategy for decades. Photo by Monika Maeckle