In Defense of Plants: explorations of the remarkable nature of plants

We could all learn much about resilience and adaptability from Matt Candeias’ book, In Defense of Plants: An Exploration into the Wonder of Plants. 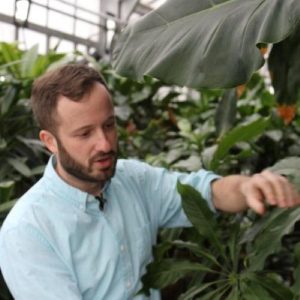 Matt Candeias, author of In Defense of Plants — Courtesy photo

The ecologist, podcaster, and self-described “nature nut” assembles a collection of fascinating plant stories, a voyage that started in his youth when he raised fish in home aquariums. His interest in aquatic life led him to pursue an education in zoology.

Everything changed the day he took a field trip to a commercial fishery. The stench of the fish factory turned him away from that path. A conversation with a friend made him realize the love of nature he had cultivated exploring the woods as a kid was more rooted in understanding ecosystems than single organisms.

Candeias switched gears and studied ecology, earning a PhD from the University of Illinois. Since, he has spent a career raising awareness of the remarkable wonders of plants.

Candeias makes the case that we’ve been hoodwinked into thinking that pollination is an altruistic venture. He cites the “seemingly endless poems, essays and more” that wax poetic about how pollination represents the harmony inherent in natural systems. “As an ecologist, I find such views to be nice, but misguided,” he writes, adding that everything in nature comes down to ensuring the passage of genes to the next generation. “And pollination is one of the most interesting ways any organism has evolved to do that.” 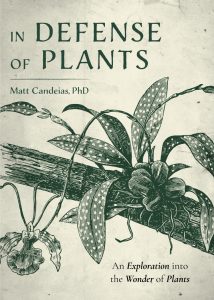 He describes the ingenious ways plants “trick pollinators ” into visiting their flowers. In short, pulling off a pollination ruse.

Some of the most studied examples include plants producing flowers that offer no food but entice pollinators to come take a look. An orchid produces a flower resembling a fuzzy female bee with the goal of luring a male to have sex with it, for example–and pollinate its flowers in the process. See photo at top of this post to see if you’d be fooled.

The book is filled with amazing and startling facts. Who knew that lizards– geckos, in particular–serve as excellent pollinators? Or that the nectar of saguaro cactus, pollinated by the lesser long-nosed bat, is loaded with amino acids that help the female bats sustain lactation while raising their young?

The sea bean, Mucuna holtonii, a legume that dangles from tropical forest canopies in Central and South America, flaunts a “banner petal” shaped specifically to pick up on the echolocation frequency of nectar feeding bats, guiding them to the location of their next meal. When a bat lands on the flower, it triggers an explosive mechanism that snaps the anthers outward, causing the pollen to erupt onto the bat’s back.

But the sea bean’s ingenuity doesn’t stop there. Once the flower has been triggered, it changes shape, which alters the way the bat sonar is reflected. Bats soon learn that flowers with this altered shape offer no nectar reward, and thus don’t visit. The result: cross pollination.

In a chapter titled “How Plants Move,” Candeias describes the various evolutionary strategies plants have devised to pass along their genetic material, from developing burrs that get caught in animal fur to the approach of the unusual Javan cucumber Alsomitra macrocarpa. The five-inch-wide seeds of this tropical vine have evolved to resemble a hang glider which carries its seeds for miles.

As the fruit matures, pressure inside it mounts, creating 27 times the atmospheric pressure experienced by humans at sea level. “Within a fraction of a second, all the pressurized mucilage comes rocketing outward, carrying the precious cargo of seed with it”–anywhere from six to 20 feet. 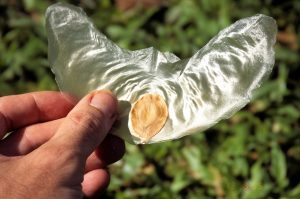 The five-inch wide seeds of the Javan cucumber turn into a hang glider that carries it for miles. –Photo by Scott Zona of Miami, Florida

Candeias educates in an accessible style, not talking down to readers nor overwhelming them with jargon. One comes away from the book with an expanded vocabulary, however. You’ll learn interesting words like idioblast (a plant cell that is significantly different from its neighboring cells) and zoochory (the movement of seeds by animals–either in fur or feathers or through their digestive systems) and kleptoparasite (a creature that survives by habitually robbing others of food).

While a fascinating and worthwhile read, the book could have been even better with color photography rather than the underwhelming low resolution black and white photos that illustrate its fascinating content. Also disappointing: the book has no index, making it difficult to revisit its interesting facts after having read all 279-pages. These decisions appear to have been unfortunate money saving strategies.

As Candeias writes in his final chapter, plants face many challenges–mostly, that we don’t appreciate them for the remarkable organisms that they are, nor the fact that all life on the planet depends on plants. He bemoans that plants are not afforded the same respect as their animal counterparts, pointing out that local nature education groups stage programming about the breeding habits of frogs, mammals and migratory birds, yet when plants are presented it’s always about their utility. “It’s as if plants were put here by some divine force just so we could utilize them,” he writes. And yet…plants are the foundation of a functioning ecosystem.

We must learn to appreciate these organisms for what they are: remarkable in the true sense of the word. And when we do, Candeias concludes, “You will come to know plants like you know your friends. You will look forward to seeing them year after year.”

TOP PHOTO: Ophrys speculum flower, evolved to look like a female bee and invite males to mate, thus spreading pollen on the male bees’ back and encouraging pollination. Photo by Esculapio, CC BY-SA 2.5 via Wikimedia Commons