Monarch butterfly population: volatile, unpredictable, with a ray of hope

Most monarch scientists and monarch butterfly followers were stunned.

After predictions labeled the Americas’ most iconic insect “near extinction” last year, the butterflies leapt back to viability as historic wildfires, a “cyclone bomb” rain event, record air pollution and the COVID pandemic dominated California news.

In the same article, Emma Pelton of the Xerces Society, told reporter Nathan VanderKlippe the butterfly rebound represented a “rare ray of hope that the population is more resilient than we thought.” 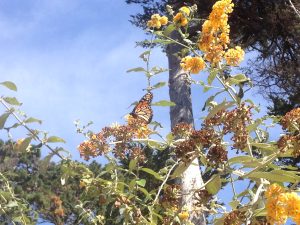 So what is the reason for the dramatic boost in west coast monarch butterflies?

In a post on the Xerces website titled “The Bounciness of Butterflies,” the invertebrate conservation organization based in Portland, Oregon, acknowledged that insect populations are famously volatile, with extreme fluctuations from year to year, depending on conditions. That said, Xerces suggested one reason for the population increase could be the year-round presence of non native milkweeds in the San Francisco Bay area.

Gardeners are increasingly planting Tropical milkweed Asclepias curassavica, and African Balloon plant, Gomphocarpus physocarpus, in their yards and landscapes. Unlike native milkweeds, these species often do not die back in the winter. The presence of these year-round host plants on which monarch butterflies can lay their eggs, allows the butterflies to continue to reproduce and grow their populations.

Xerces cited a recent paper by David James, an entomologist and monarch researcher at Washington State University, which made the case that adult monarchs, eggs and larvae were common during winter and most of spring. The butterflies utilized the non-native milkweeds and multiple nectar sources from native and ornamental plants. Evidence from weekly counts and tagged butterflies indicated increased dispersal to the north and east during late April-mid-May, suggesting the butterflies participated in the spring migration to the Pacific Northwest and eastern California.

“In short, there is a possibility that winter breeding monarchs are contributing to the migration, and this may be more true in certain years when conditions are favorable,” Xerces concluded.

James, who has studied monarchs in Australia and witnessed what he called their “demonstrated resilience to changed conditions,” said via email “I’m probably the only unsurprised monarch scientist!”

In a post on the Monarch Watch website, Taylor pondered what appeared to be the impossible mathematics of such a small population of surviving butterflies generating 200,000 offspring.

Taylor speculated that by the time the 2021 spring California migration began, only 441 females of the 2,000 counted survived the winter.

He then suggested three possible reasons for the dramatic increase in western monarchs.

“With only one year of a population increase, it is impossible to say whether this is the population clawing its way back from the brink or a blip in the continuation of the migration’s decline,” Pelton wrote on the Xerces website. “We won’t know this until we have more years with either more or fewer monarchs.”

Don’t forget to vote! Engelmann’s daisy or Gayfeather? Click to vote for 2022 Unofficial Pollinator Plant of the Year

In short, we don’t understand how or why this western butterfly population boom occurred, but we are delighted that it did.

Meanwhile, the eastern monarch butterfly population which migrates east of the Rocky Mountains from Canada, through the midwest and the Texas funnel and into Mexico, is still being tallied. Taylor predicted a decrease this year but reports from the roosting sites in Mexico are upbeat.

Taylor admitted his estimates might be overly pessimistic. An early report from El Rosario, one of the 12 sanctuaries in the Mexican mountains, offered that the population this year was about a third larger than last year. In early December, the counts of trees occupied by monarchs at Chincua, Cerro Pelon and Herrada, three other roosting sanctuaries, were all greater than expected.

“I’d be delighted to be wrong,” Taylor wrote.