Queen, Monarch Caterpillars and Butterflies: How to Tell the Difference

Found a Monarch caterpillar on my milkweed!

Every year around this time as the Queen butterflies start to show up, we get lots of questions about how to tell the difference between Queens, Danaus gilippus, and Monarchs, Danaus plexippus.  And with the warm weather that has gripped South Texas throughout November and now December, many of us are still finding eggs and caterpillars in the leaves of our milkweed.   Queens are here en masse.

As it turned out, the caterpillar in question that my friend Hugh texted me about (excuse the typos) was in fact a Queen.  The giveaway:  it had three sets of protuberances, rather than two. These protuberances are often referred to as antennae, but they are actually a type of sensory organ called tentacles. Most caterpillars–including Monarchs–have a set of tentacles at the front of the body and another at the back, but others–like Queens–have another set somewhere in the middle. Tentacles help caterpillars sense the world around them through touch, and can also throw off predators by disguising the caterpillar’s head. Caterpillars also have antenna, but these organs are far less obvious and helpful for identification. The antennae are short, spiky projections on either side of the caterpillar’s mouth. 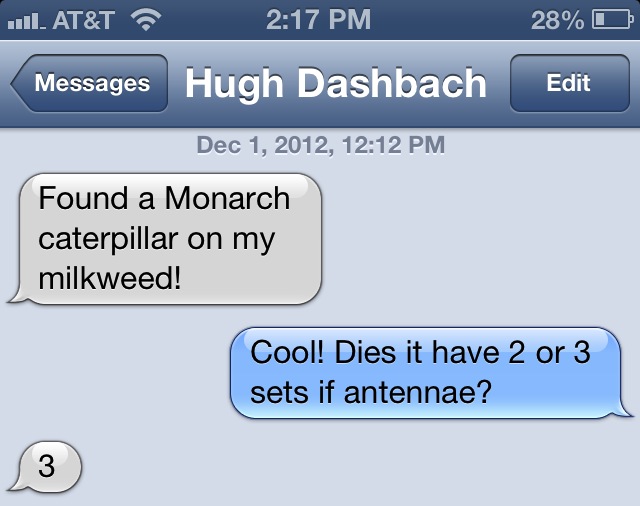 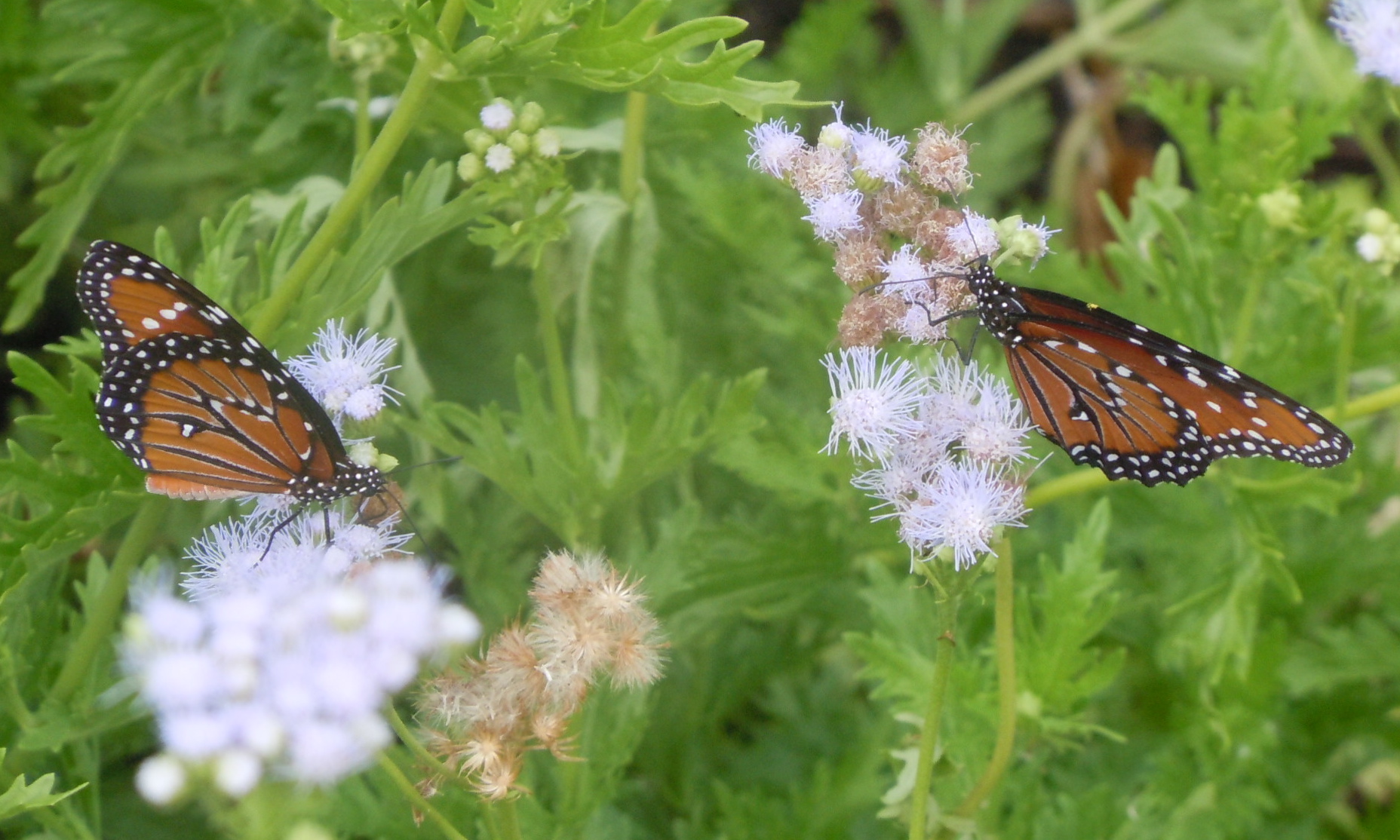 Hugh’s confusion is common:  because of their similar color, size and affinity for milkweed as a host plant, Queens and Monarchs are often mistaken for each other in their various life stages.

But once you look closely, it’s not that hard to tell the difference between Monarchs and Queens.

First, Queens appear solid orange compared to the varying shades of a Monarch.  In the photo above, notice how with their wings folded, the Queens’ solid dark orange is interrupted with occasional white dots–nothing like the striking stained glass veins and color pattern of the Monarch below. 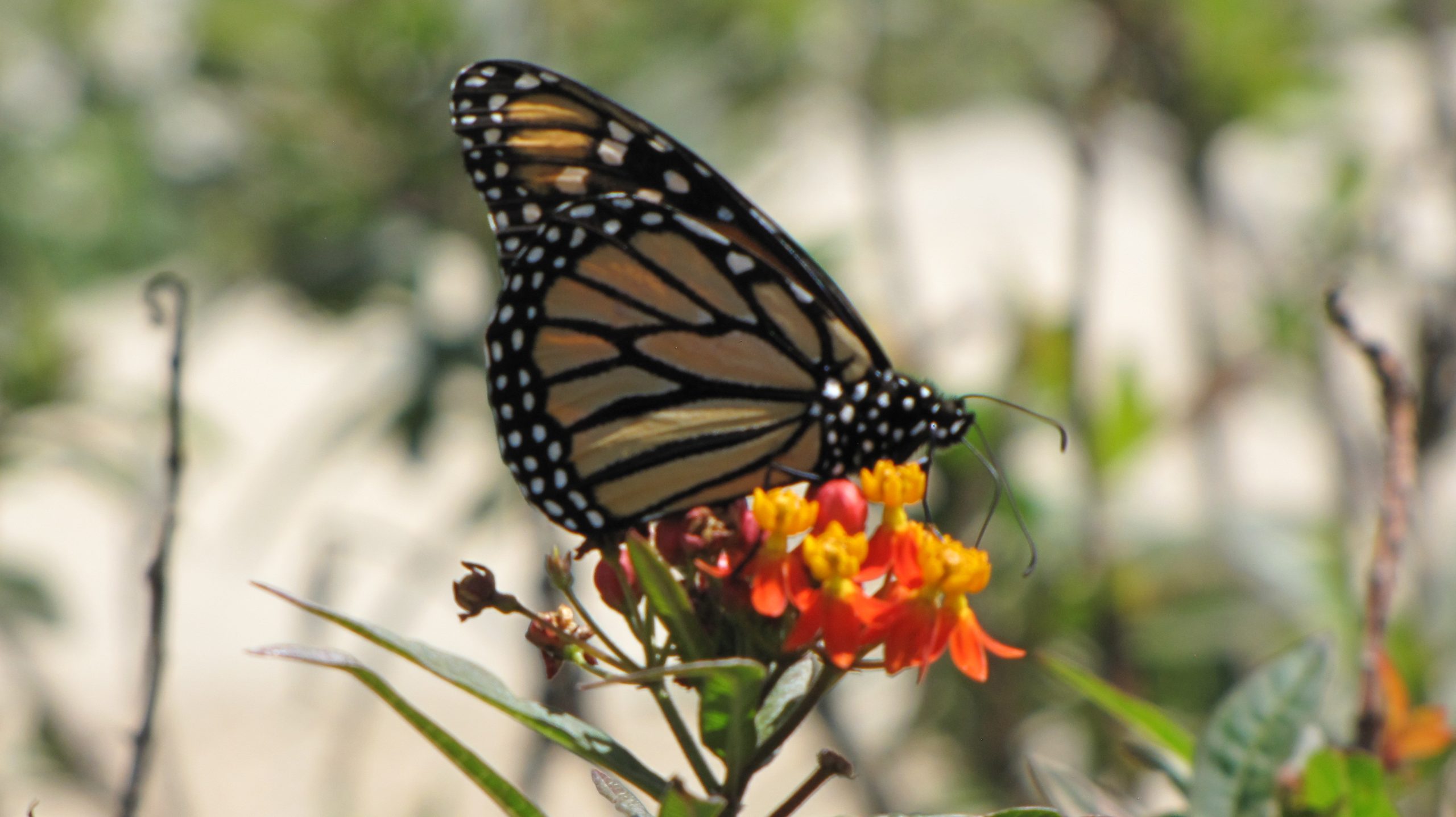 With their wings open, the difference is even more obvious.  The Queen is solid, the Monarch has varied coloration.  Both of the examples below are male butterflies, as you can see by the prominent display of their family jewels–the defunct pheremone sacs that presumably once drove the lady butterflies wild.

Female Queens and Monarchs don’t have these prominent markings with wings open.   In Monarchs, the black veins are generally wider and more pronounced in the females. 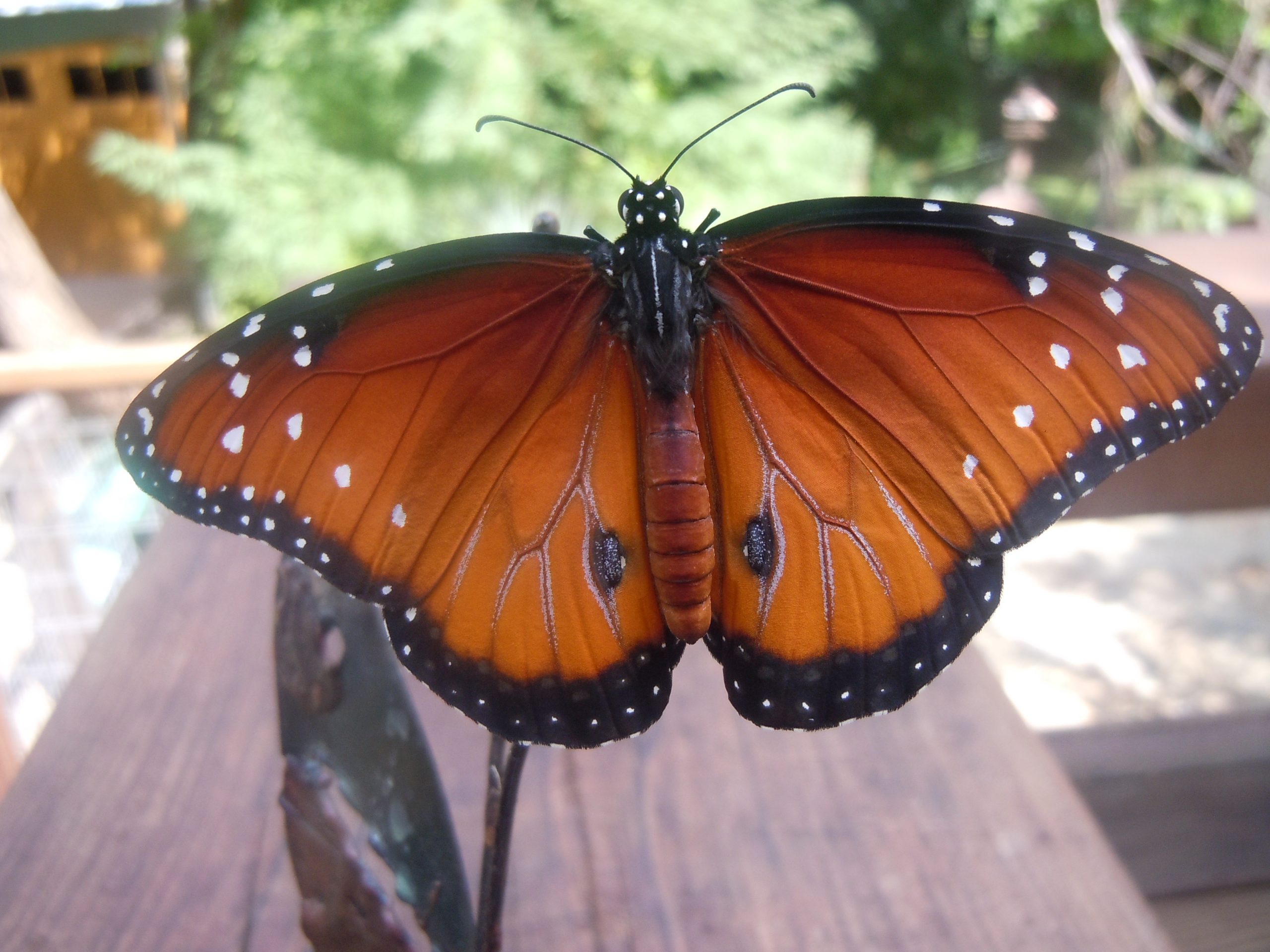 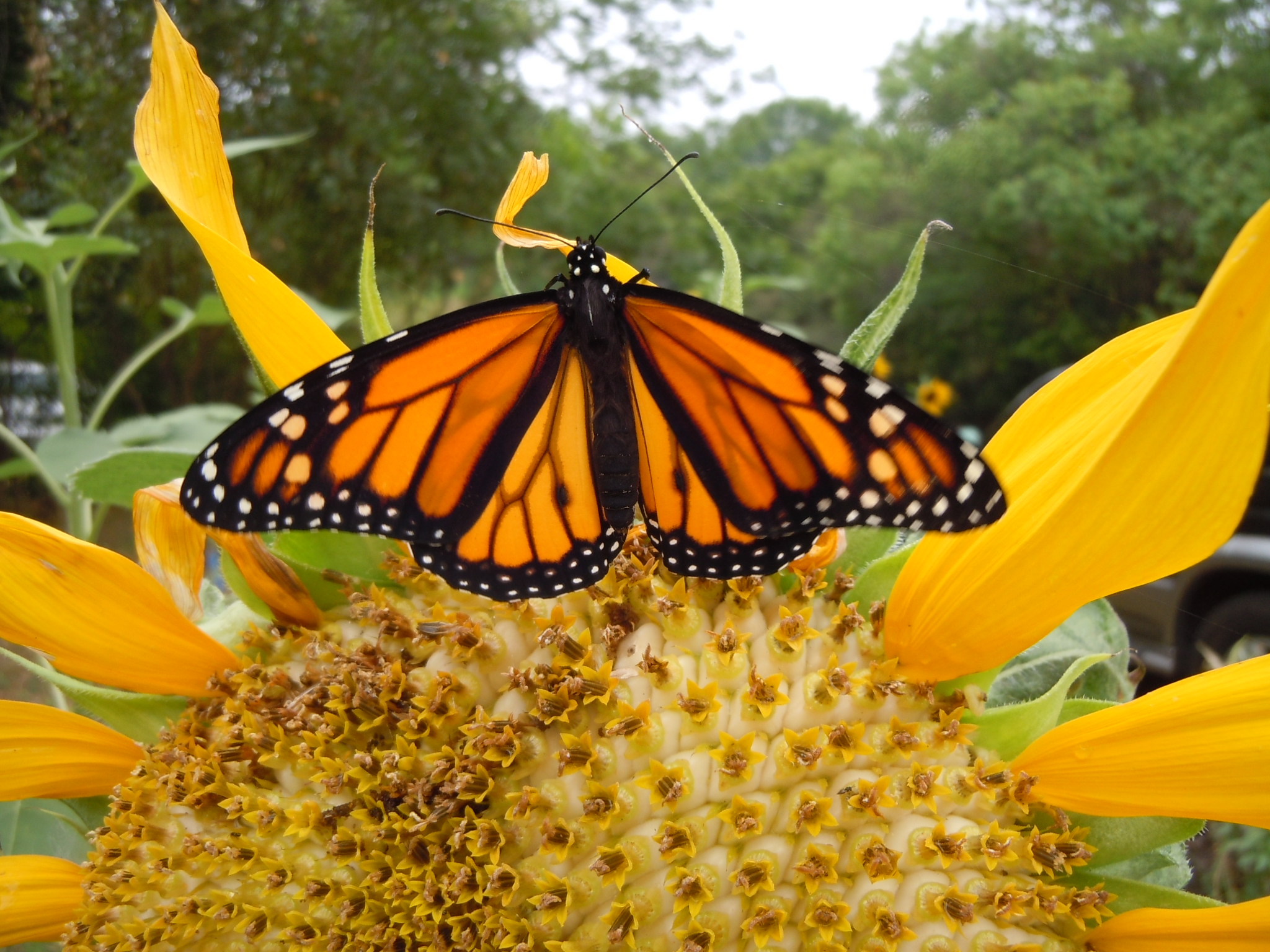 In the caterpillar stage, the most obvious difference is that Queens have three sets of tentacles, while Monarchs have two sets.

Notice in the photos below, the Queen has what appear to be THREE sets of protuberances.  The Monarch caterpillar only has TWO.  Both wear distinctive yellow, black and white striped suits.   The Queen often will have a slight red blend as the tentacles connect to the caterpillar’s torso.  The patterns of the stripes can vary depending on time of year, humidity and diet. 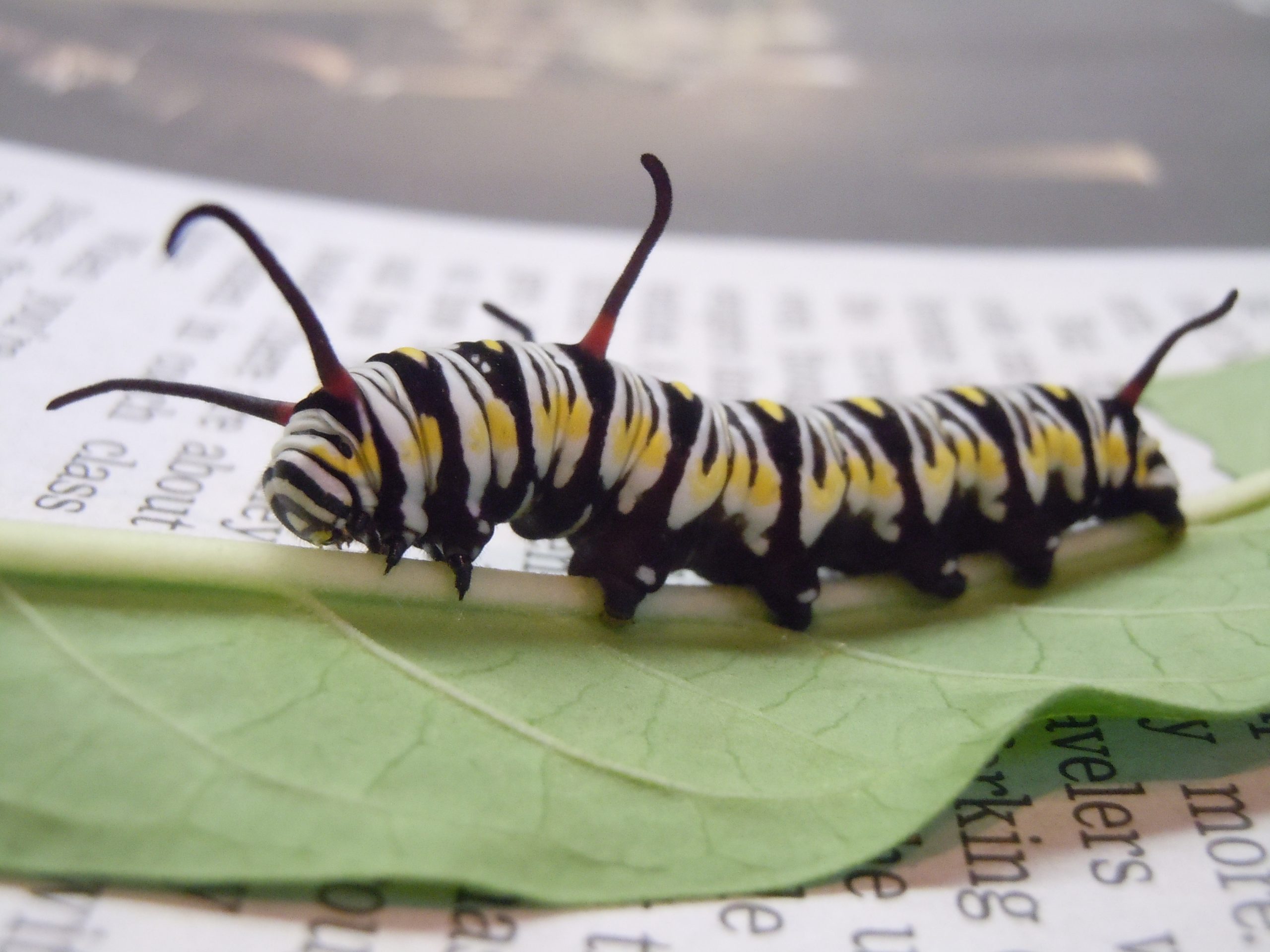 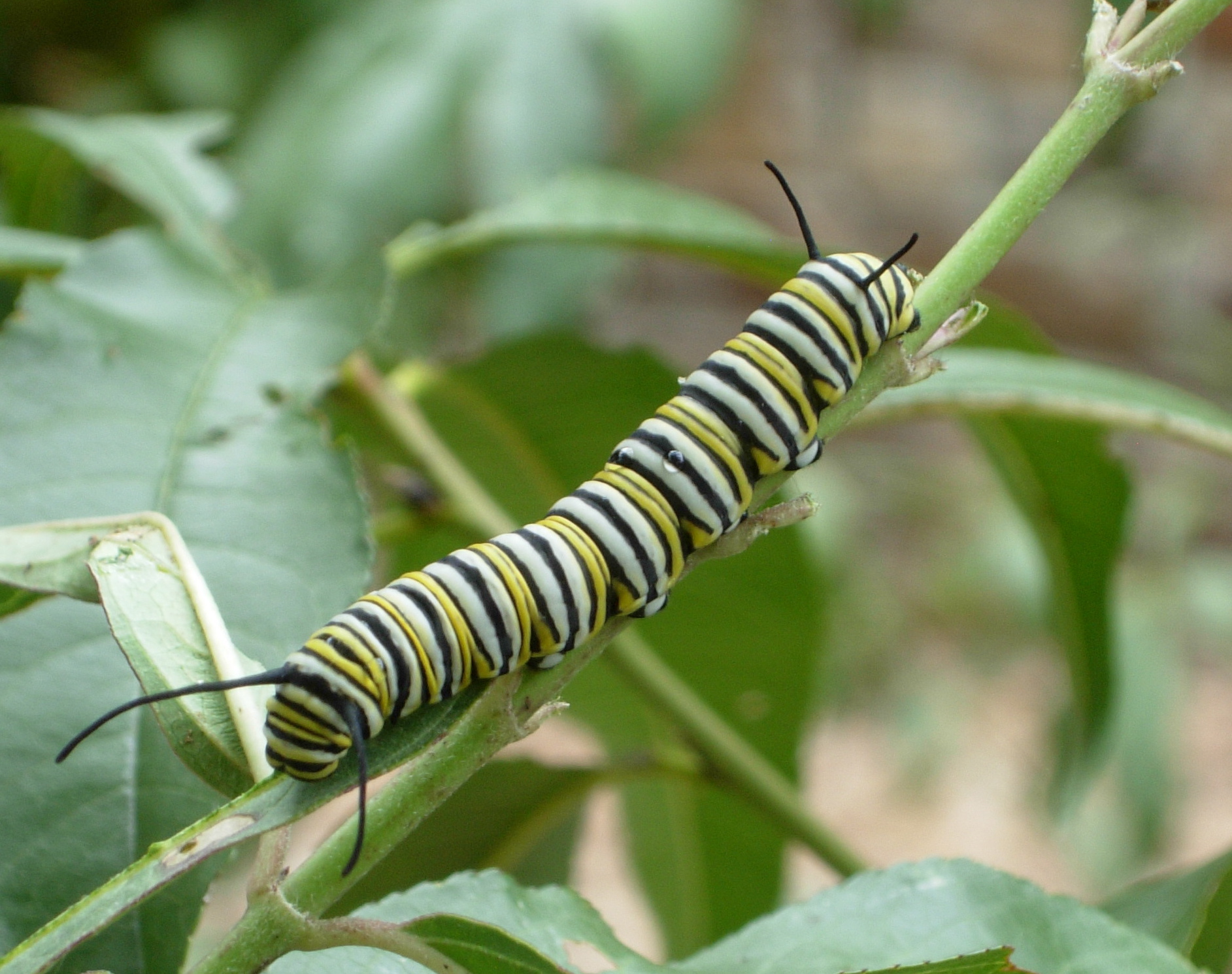 Scientists don’t fully understand the biological purpose of the tentacles, which seem to reach out and “feel” the universe around them.   They swerve and turn in various directions, almost punctuating caterpillar moves like a roving eye or arched eyebrows on the human face.

For the sake of identification, let’s just say their purpose is to signal the difference between Queens and Monarchs.   For more on filaments and what we do and don’t know about them, check this link on the Monarch Watch page. 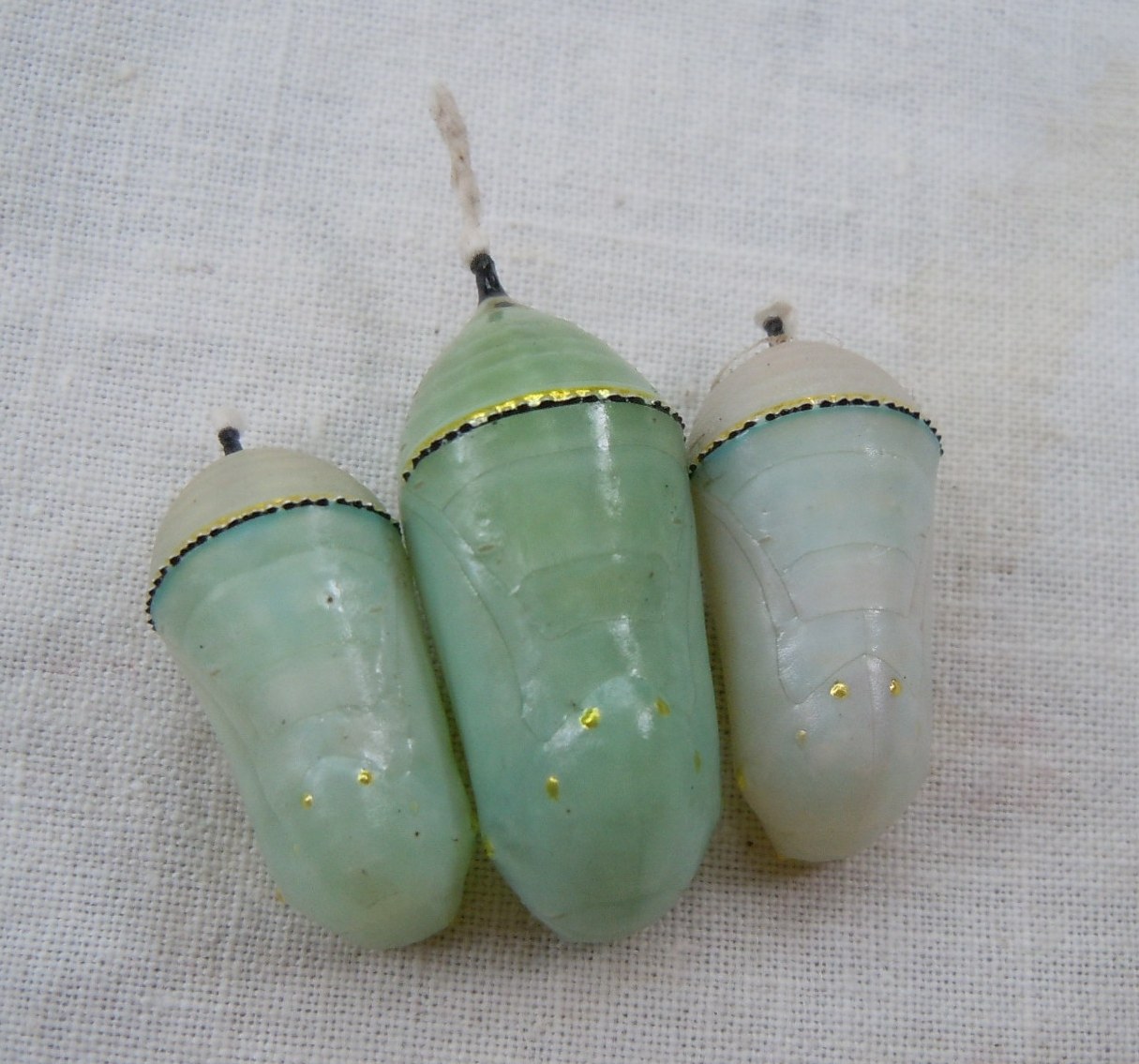 Queen and Monarch chrysalises. Monarch in the middle.