My first day of earnest butterfly gardening of 2013 met with a sweet surprise:  my FOS (First of Season) Monarch butterfly, Sunday, March 17.
And, it was a faded female, fluttering in my mulched front yard garden, lighting from one Tropical milkweed plant to another.  In her wake, about a dozen creamy, white Monarch eggs were deposited on the undersides of select leaves.  I retrieved a handful for safekeeping inside. 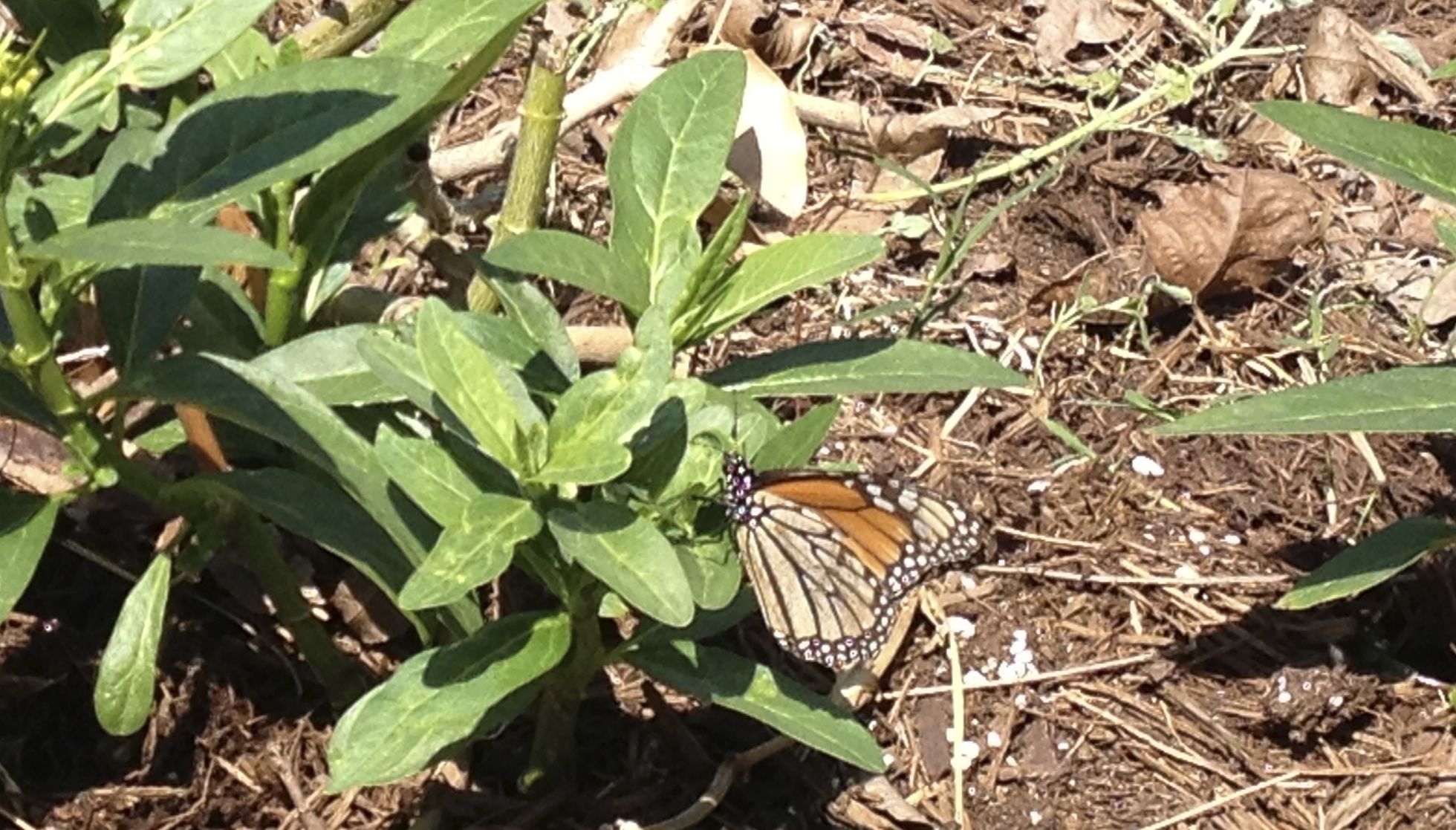 The sight was especially reassuring given that we just endured the worst news in history on Monarch butterfly numbers this week.   The official report from the World Wildlife Fund preserves in Michoacan, Mexico, confirmed what many of us had suspected for 2012. 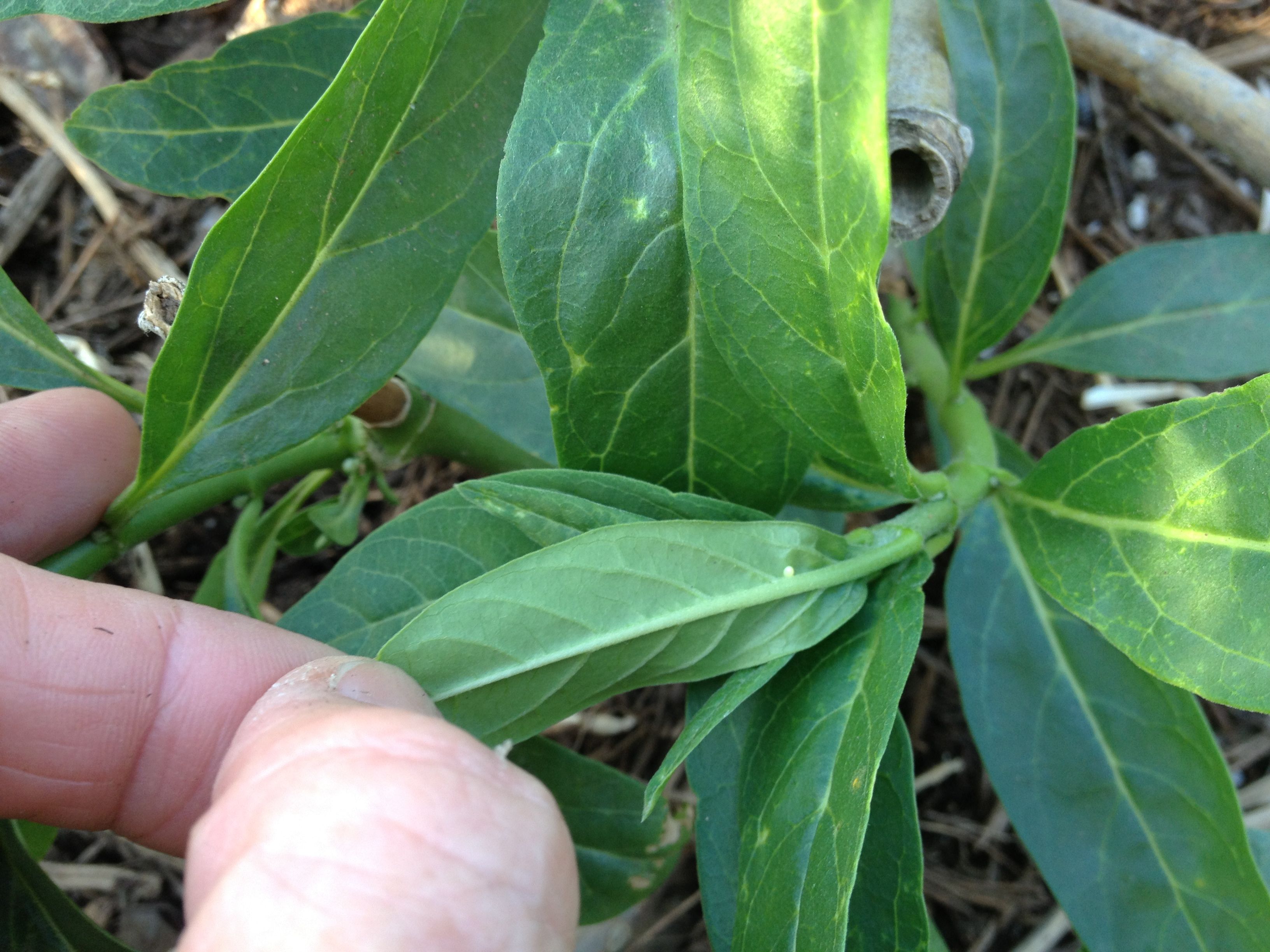 She left about a dozen creamy white eggs on the tenderest milkweed leaves she could find.      Photo by Monika Maeckle

The migrating butterflies occupied a mere 2.93 acres (1.19 hectares) of Oyamel forest in Mexico, the smallest recorded population in history. The number represents a 59% drop,  down from 7.14 acres (2.89 hectares) last year and the lowest population since record keeping began 20 years ago.  During the 1990s, the amount of forest typically occupied by Monarch butterflies averaged more than 20 acres. 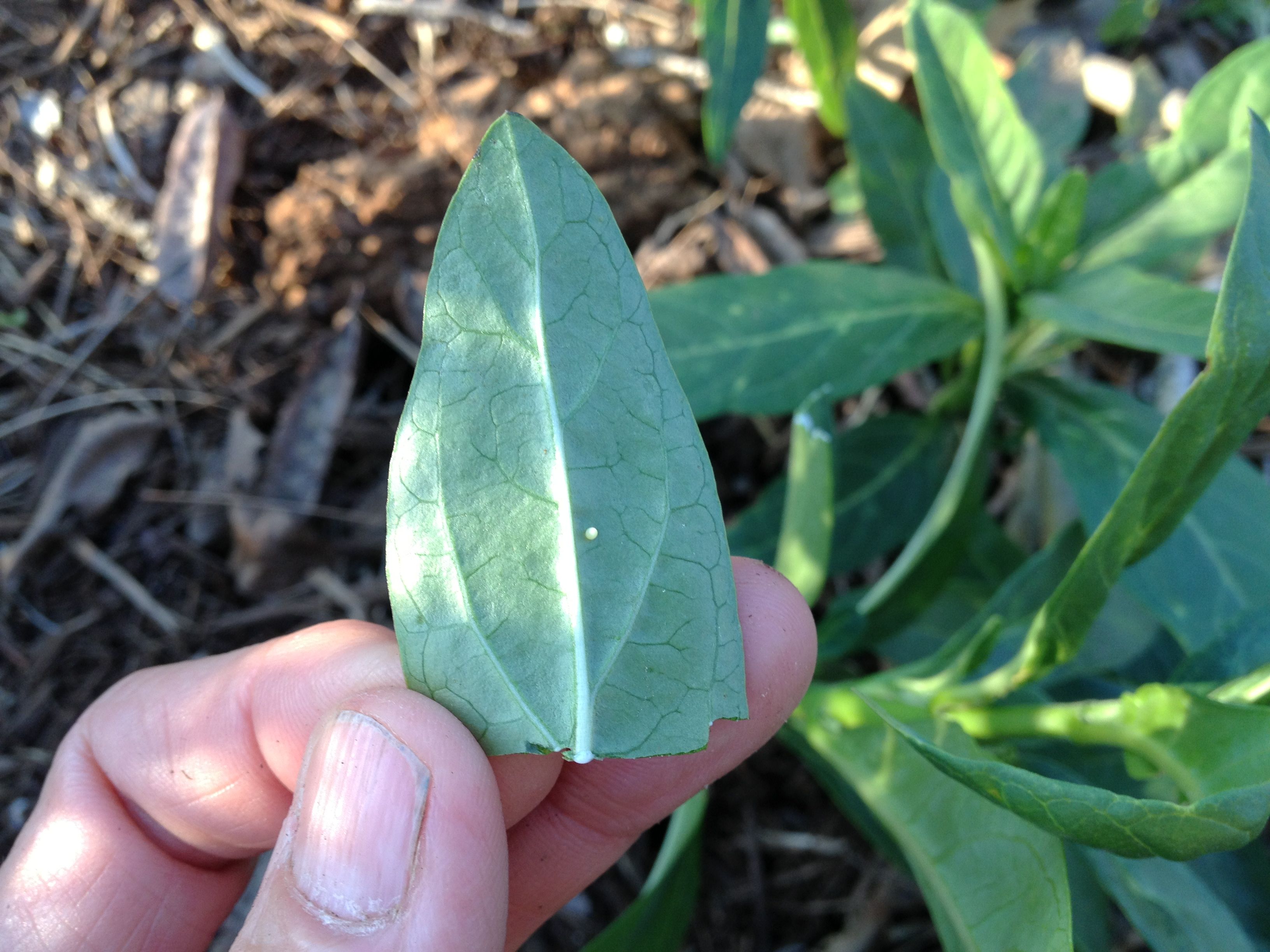 Here’s a close-up. Never mind the dirty fingernails. This egg is coming inside for safekeeping! Photo by Monika Maeckle

Why is anyone surprised?  Climate change, drought, wildfires, illegal logging in Mexico, and pervasive pesticides have brewed a perfect storm that threatens the continuation of the magnificent Monarch  migration. Genetically modified crops leave our heartland void of milkweed, the Monarch host plant, starving the migrants of the only food that feeds their caterpillars. 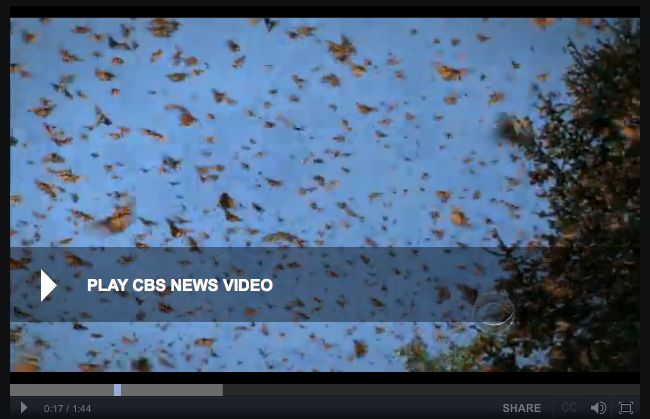 Passage: the Decline of Monarch butterflies via CBS news.

Our friend Dr. Lincoln Brower co-authored an op-ed piece with Homer Aridjis, a Mexican author and former ambassador, for the New York Times headlined:  “The Winter of the Monarch.”  “Today the winter monarch colonies, which are found west of Mexico City, in an area of about 60 miles by 60 miles, are a pitiful remnant of their former splendor,” wrote Brower, who has been studying Monarchs for decades.
“Scientists see ominous decline in Mexico’s Monarch butterflies,” read the headline topping an AP story that ran on NBC news’ webpage and many other news sites.   The listservs and Facebook exploded with angst from butterfly fans.

“Bad omen: More than half of the monarch butterflies in Mexico have gone missing,”  tweeted Steve Silberman, as scores of others chimed in to express their dismay.  The Monarch Watch Facebook page posted the news and dozens of comments resulted.   “Terrible news” and “So sad” typified responses, along with myriad calls to plant more milkweed.

Just keep doing your thing, girl. She laid about 12 eggs on Sunday. Photo by Monika Maeckle

“All in all, it was not a good year for monarchs,” said Dr. Chip Taylor, founder of Monarch Watch, in his response to the report.
Yet…thinning my thick patch of Cowpen daisies to make more room for milkweed, I couldn’t help but marvel at the tenacity required for this small, slight creature to have traveled so far to complete her life cycle.   More than 850 miles. Faded, fluttering, she sought just a few good leaves for her babies.   She didn’t give up.
And we shouldn’t either.