From the Texas Hill Country to Michoacan! Monarch MJT894 was recovered on the forest floor here and reported last week. The butterfly was tagged on October 11, 2011, at the height of the Texas drought with Dr. Lincoln Brower.      Photo by Monika Maeckle

One of 34 butterflies we tagged during the historic Texas drought of 2011 while on a field trip with Dr. Lincoln Brower was recently recovered at El Rosario sanctuary in Michoacan.  The particular butterfly, MJT 894, was tagged at a private springs among the late season Frostweed at the Whispering Waters Ranch. 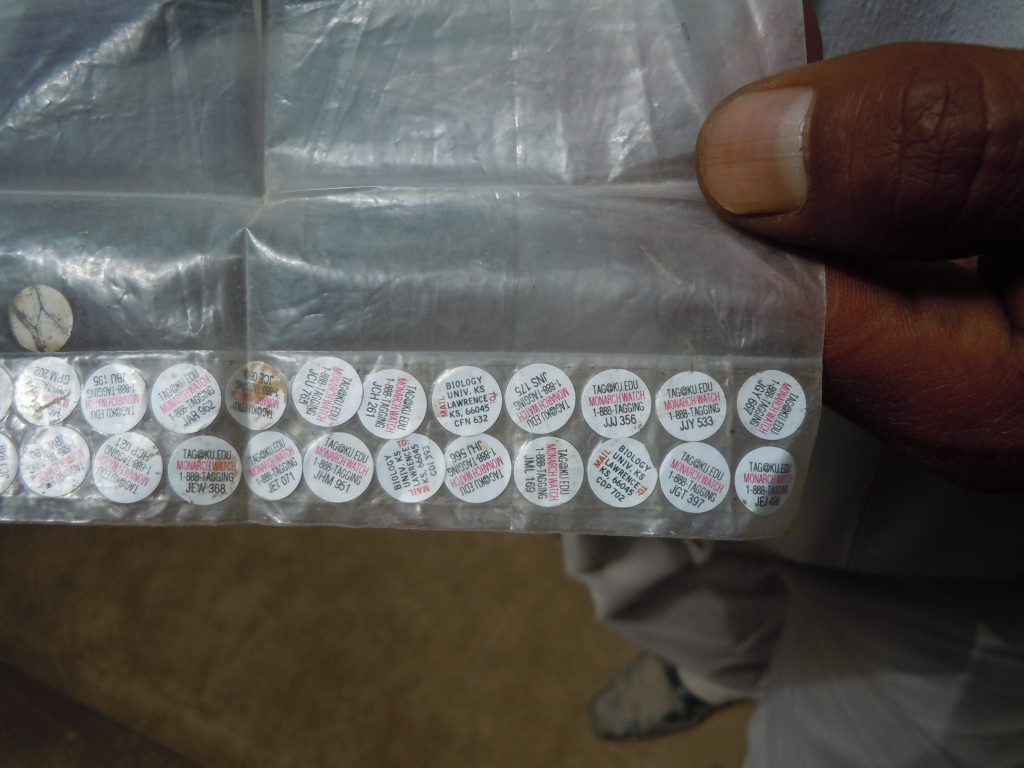 The news arrived via an email on the DPLEX list, a listserv that reaches hundreds of butterfly enthusiasts, scientists and academics.  Diane Pruden, who recently returned from a visit to the Monarch sanctuaries in Michoacan, Mexico, shared the news topped with the subject line:  “More tags from Mexico.”  While unpacking from her trip, “Low and behold, I found more tags that were not included in earlier Emails,” she wrote.  “So, attached is another list of tags from El Rosario.”
For those unaware, the people of Michoacan are paid about $5 per butterfly tag found on the recovered bodies of dead butterflies of the floor of the Michoacan forest.   Visitors are often approached by native people and offered “steekers,” a Spanish pronunciation of “stickers” which are how the tags are often identified there.   Visitors then share the tag numbers with Monarch Watch to assist in gathering data for their Monarch tag recovery database. 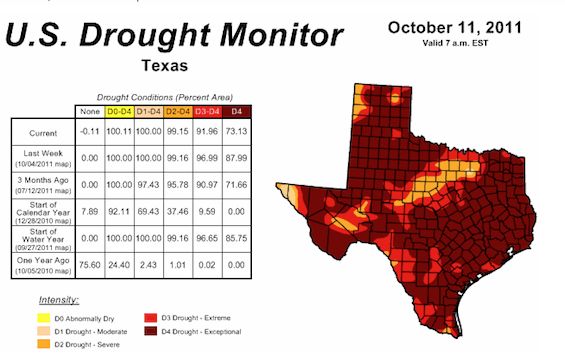 Here’s what the drought map looked like the day our MJT 894 was tagged. Courtesy graphic

About a week after Prudden’s email, Singleton responded that after checking her logs, she realized that nine of the tags on the new list had been Monarchs tagged during an October 7 – 13 stay in the Hill Country, at the tail end of the historic 2011 Texas drought.
All nine were from Menard County in Texas, and MJT 894 was tagged 10/10/11 at Whispering Waters Ranch “along a natural spring that did not dry up in the Texas drought,” said Singleton.   “Lincoln Brower and Kip (Kiphart) were collecting specimens at this spot with us that day.”
Dr. Brower had made a field trip to Texas that brutal Texas fall.  Monarch Larvae Monitoring Project volunteer extraordinaire Kip Kiphart had contacted me to see if we might be able to take Brower out into the campo to see  butterflies in their natural setting in the Texas funnel flyway.  I was glad to oblige.
My first call was to Jenny Singleton, a dear friend who wrangled me into this whole butterfly seduction way back in 2005 by inviting me to “come tag Monarchs” at her place on the San Saba River.  Singleton is involved in Monarch outreach in Grapevine, Texas, and helps organize the annual Grapevine Flutterby Festival.  She also spends alot of time at her ranch where she pursues Monarchs and myriad naturalist interests.
Austin entomologist Mike Quinn also joined us on that fall outing, and took many photos, some of which you’ll see below.   We first went to our special stretch of the Llano River, and later visited the Whispering Waters Ranch Resort…..well, I’ll just let you read the story below.   What a great day it was.

A student of Monarch butterflies for more than 65 years, Dr. Brower knows as much about the migrating creatures as anyone on the planet. Equally impressive is the 80 year-old’s physical stamina and untainted enthusiasm for the insect that has captivated him since he was a graduate student at Yale and snapped the famous “barfing blue-jay” photos that proved Monarch butterflies don’t taste good.

Joining our butterfly chasing dream team were Mike Quinn, Texas  Monarch Watch coordinator and former statewide entomologist for Texas Parks and Wildlife, Kip Kiphart, award-winning volunteer manager/trainer for the Monarch Larvae Monitoring Project at Cibolo Creek Nature Center in Boerne, and Jenny Singleton, a dear friend, teacher and fellow tagger who looped me into Monarch mania back in 2005.   While Jenny and I hold no PhDs, we DID hold our own, making all citizen scientists proud by delivering dozens of live Monarch butterflies to Brower for his drought experiment.

Dr. Brower flew into San Antonio this week with the goal of observing the drought firsthand and collecting specimens to take back to his lab in Virginia. There, he will freeze and dry them, extract and weigh their fat,  and assess their health and chances of surviving at their winter roosts in the mountains of Michoacan.
We started our day on the Llano River,  between Mason and Junction.  With a cloudy sky, not much was flying, but we netted six.
Brower quickly appraised each butterfly–“skinny,” “fat,” “she looks pretty good,” “porker”–taking copious notes in a charming old-school notebook while deftly folding them into waxed paper envelopes for storage in an icechest.  He also shared new ways to determine male from female butterflies without unfolding their wings (males have obvious pincers on their rearends) and how to tell if a female is carrying eggs (she has a “bead” in her abdomen which you can feel when gripping her gently).
Next: a stop in Menard at the beautiful Whispering Water Ranch Resort, where the generous Carolyn Dippel led us to a spring-fed pond rimmed with dinosaur tracks and tall, white Frostweed.  There we tagged another 34 butterflies, all nectaring on the late season bloomer.  Quinn, Singleton and I left the tour here, as Brower and Kiphardt continued on to Junction for a visit to the liatris fields at Native American Seed company where 40 more butterflies were gathered.
“When someone gets the Monarch bug, they’re bit hard,” remarked Dr. Brower. No argument here.  I look forward to reading the results of his study.