Some stories never grow old no matter how often we hear them.  Especially when cool, appropriate technologies are tapped to amplify a known tale with delightful graphics and interesting maps. 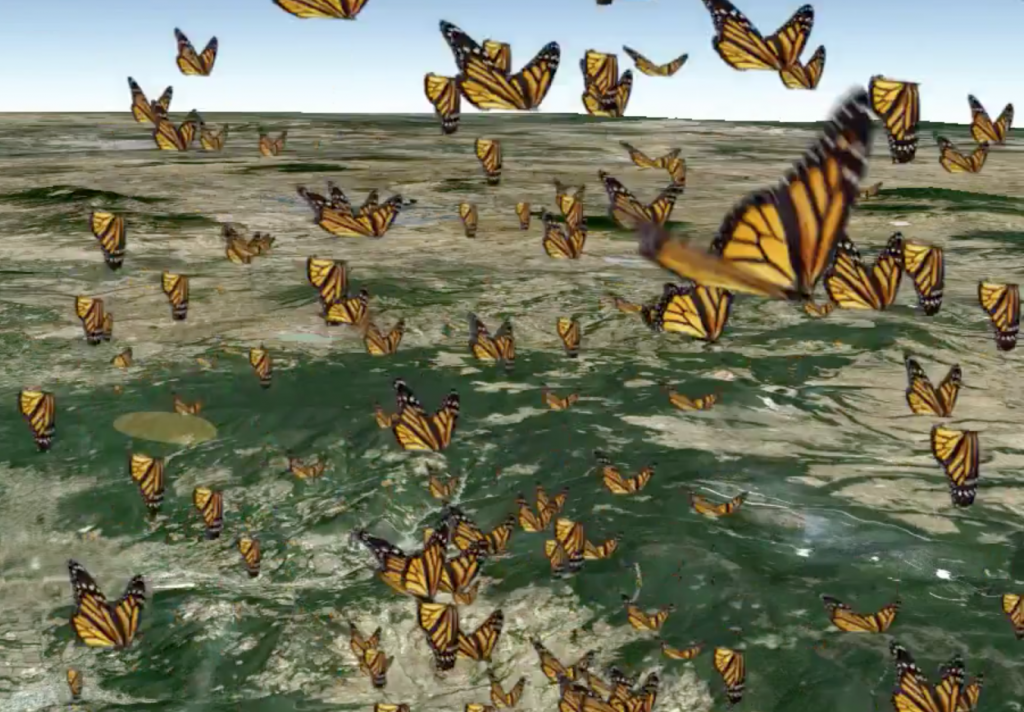 Such is the case with the recently released Monarch Butterfly Google Earth Tour, produced by Ari Daniel Shapiro and the gang at Atlantic Public Media and the Encylopedia of Life.
Sometimes technology injected into a natural phenom like the Monarch migration can seem intrusive and inappropriate.  But in this case, Google Earth mapping software lends a new perspective to the Monarchs’ epic journey, providing differing perspectives–from Monarchs’ flying in the sky to citizen scientists on the ground.
What is a “Google Earth Tour“?   As you may know, Google Earth is an amazing 3D virtual globe software program that allows one to travel the world without ever leaving your desk.   Developed by the CIA-funded Keyhole, Inc., and purchased by Google in 2004, the technology makes it possible to give a “tour” of most patches of the planet without ever leaving home.  The program also uses digital modeling data collected by NASA to provide 3D views of faraway places. 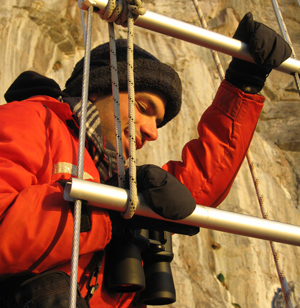 Shapiro said the idea for the tour resulted from a reporting trip he took to Winnipeg, Canada, last year.   “I visited someone’s home who had a monarch butterfly waystation.  I thought about how far those butterflies had to travel, and the way in which people feel connected to these insects.  It felt like it would make a great story,” he said via email.
Shapiro, like the Monarchs, starts this virtual tour in March in Michoacán.  Environmental geographer Dr. Isabel Ramirez of the Universidad Autonoma de Mexico tells us that Monarchs are “small pieces of sunlight.”

From there, they journey north. Dr. Karen Oberhauser of the University of Minnesota’s Monarch Lab details their travels through northern Mexico, the “Texas funnel,” on to the spring ranges in the Midwest and then to the summer breeding grounds further north.   The first half of the 12-minute video provides a view from the butterflies’ perspective, flying high above the varied terrain, stopping periodically to lay eggs and continue the life cycle.   Given the obstacles–ants, birds, wasps, diminished habitat and climate change–their tenacity is remarkable. In her plainspoken Minnesota accent, Dr. Oberhauser declares:  “Yeah.   It’s incredible.”
Then Shapiro switches gears.   He introduces citizen scientists and butterfly lovers, from Mark Garland and Paige Cunningham in New Jersey to Mary Beth Curry in Sylvester, Georgia.   Garland and Cunningham tag Monarchs near Cape May, and Cunningham likes to whisper “Have a good journey” upon releasing them to fly on their way.  Curry, a teacher, shares Monarch caterpillars with her students.
The story continues into Fall when the butterflies arrive at our famous Texas funnel–the channel through which ALL migrating Monarchs must pass to reach their ancestral roosts in Mexico.   That’s where we come in.
I heard about Shapiro’s project through the DPLEX email list, an old style email listserv that reaches hundreds of professional scientists, citizen scientists, and butterfly lovers.  Journey North had forwarded Shapiro’s solicitation for volunteers in which he invited  contributions of audio files and photos for the project.
________________________________________________________________________

I couldn’t resist, so in early December of 2012, I contacted Shapiro.  My contribution appears in minute 10:51, where he plays my allergy congested sound bite, which describes Monarchs “clustered like grapes” on the pecan trees that line our stretch of the Llano River, a favorite Fall overnight roosting spot.
Shapiro also plugged in a couple of my photos, including a shot of family friend Annie Alice Schenzel of Austin with her back to the camera, netting Monarchs on the Chigger Islands.   The caption reads “Monika Maeckle” and as much as I wish I were 24 years old again, that’s not the case. 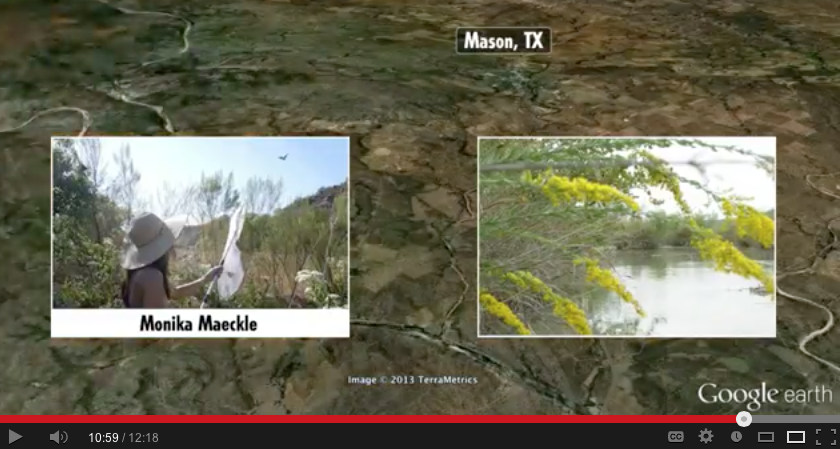 Nope, not me. That’s Annie Alice Shenzel of Austin, TX. That IS my voiceover, though. Photo via Encyclopedia of LIfe

When the video came out, I contacted Shapiro, but it was too late to make the change.   Lucky for us, Ms. Schenzel is gracious in being misidentified. “I am not even close to being offended by this,” she relayed via email, when told about the mix-up.  Thanks, Annie!
The entire project would not have been possible without the new technologies that bind and sometimes divide us.  In fact, citizen science would be nowhere near its current zenith without crowdsourcing tools like Facebook, Twitter, Google Earth, listservs, Smartphones, and blogs/websites like the one you’re reading.   We would all be marveling alone, unable to share the wealth of magic and information.