National Pollinator Week will be here June 16-22.  We’ve written before about the need to assist pollinators–the bees, butterflies, beetles, bats and birds that make 75% of our food crops possible. 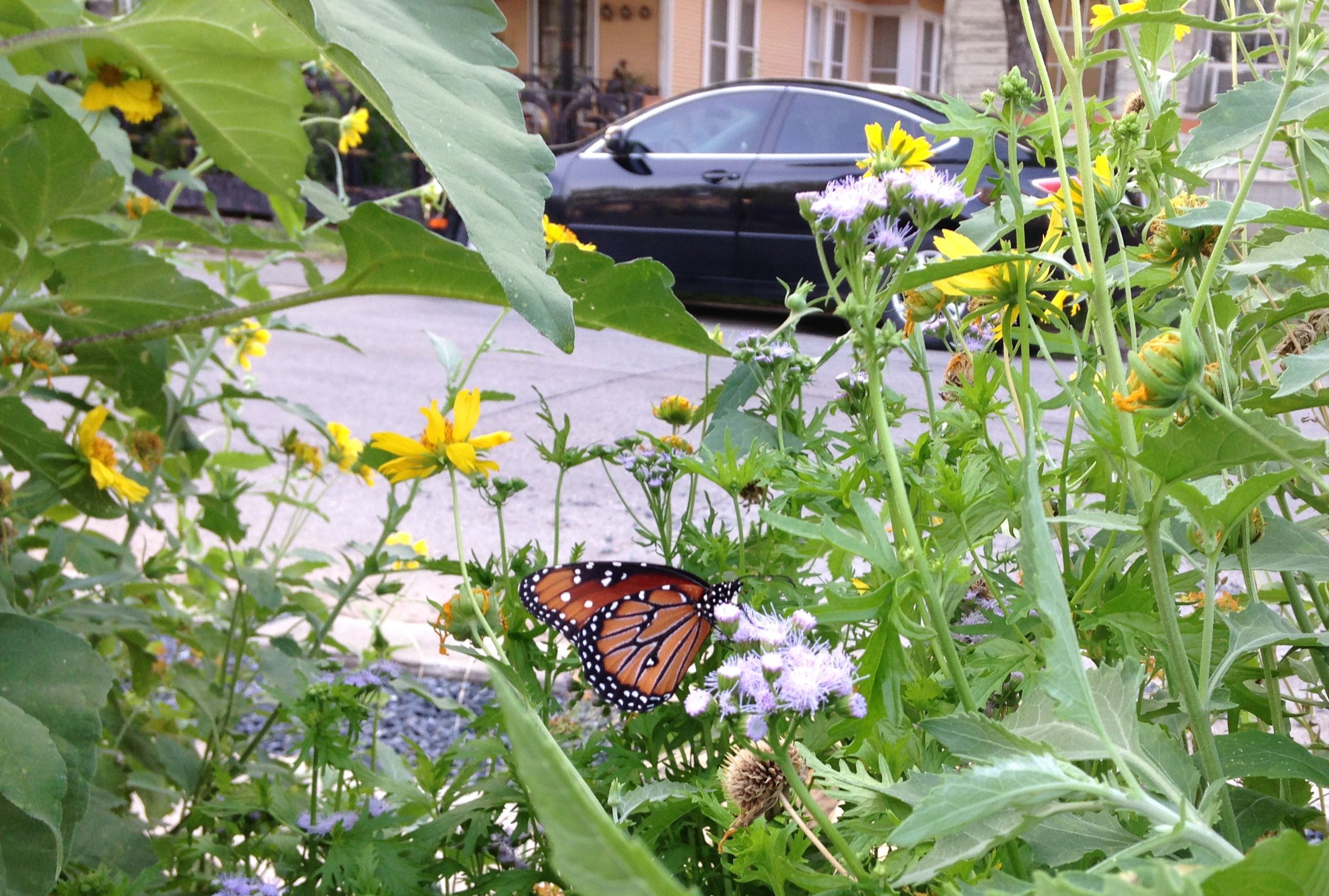 Who says you can’t have a pollinator garden in the city? Queen on Purple Mistflower. Photo by Monika Maeckle

According to the USDA, one out of every three to four mouthfuls of food we eat and beverages we drink is made possible by pollinators.  If it wasn’t for the 200,000 species of insects and other creatures that help angiosperms (flowering plants) reproduce, much of the world would go hungry.
These mobile organisms move from plant to plant, making reproduction possible, delivering pollen from the male parts of flowers (the anther) to the female parts (the stigma).   The result?  The fruits, nuts and vegetables that sustain us.
Habitat loss, pesticide use, climate change and genetically modified crops have caused a serious decline in pollinators, resulting in lesser productivity in the food chain.  In severe cases, hand pollination has  been required for food crops to be productive–apple trees in China, for example, increasing food costs as much as 130%.

In China, the lack of insects requires hand pollination of apple trees by people. Photo via www.infiniteunknow.net

Surely you’ve heard of the bee crisis.   A strange malady called colony collapse disorder has decimated the bee population, causing a huge loss of native bees.  Generally,  beekeepers lose 10-15% of their colonies to disease and various stresses each year. But since the advent of colony collapse disorder, losses have averaged 30%.  And bees, with their fuzzy bodies and specialized “pollen basket” body parts, are the most efficient pollinators.   Their decline negatively impacts plant production.  While the cause of CCD is not completely understood, the usual suspects of habitat loss, pesticide use (a special class of pesticides called neonicotinoids in particular), drought, disease and climate change have been implicated–just as in the downturn of the Monarch butterfly migration.
But maybe things are looking up for increasing pollinator habitat, at least when it comes to the 17 million acres of highways and right-of ways under the direction of the U.S. Department of Transportation.

Integrated vegetation management (IVM), beautiful to look at, great for pollinators, and saves money on mowing. Photo via University of Northern Iowa.

On May 30, Representatives Alcee L. Hastings (D-FL) and Jeff Denham (R-CA), Co-Chairs of the Congressional Pollinator Protection Caucus, introduced the Highways Bettering the Economy and Environment Act, known as the Highways BEE Act.
The BEE Bill, an amendment to the Highway Trust Fund reauthorization, encourages states to mow and spray fewer chemicals and plant more native plants on the 17 million acres of highway rights-of-way. It incurs no additional costs to states. The practices it promotes can save about 25 percent annually in roadside maintenance costs.
Passage of the bill directs the U.S. Department of Transportation to use its authority to encourage willing state transportation departments and rights-of-way managers to embrace practices that support pollinators, ground nesting birds, monarch butterflies and other creatures.  It also calls for the Department of Transportation to conduct or facilitate research and demonstration projects on the economic and environmental benefits and best practices for integrated vegetation management (IVM), reduced mowing and native plantings for pollinator habitat.

Pollinator Plant Guides are available by region at the Pollinator Partnership website.

According to the Pollinator Partnership, a nonprofit organization devoted to pollinator advocacy, the legislation is nearly identical to a bill introduced in 2011 which was widely supported by 28 national organizations and business, 175 regional organizations, 46 researchers and more than 1,500 individuals. “Regrettably, those good efforts [in 2011] fell short. We don’t want to fall short in helping pollinators this time!”
Indeed not. So go ahead and sign the petition right now.
What else can you do?  Plant flowers, preferably natives.   Pollinators need nectar sources to fuel up and keep all that sexual reproduction active between the male and female flower parts, resulting in food and beverages for us.   They also need host plants on which to lay their eggs.  The Pollinator Partnership has several pollinator plant guides that can direct you regarding what’s most appropriate in your region.  You can also contact your local agricultural extension office or Master Gardener Program. 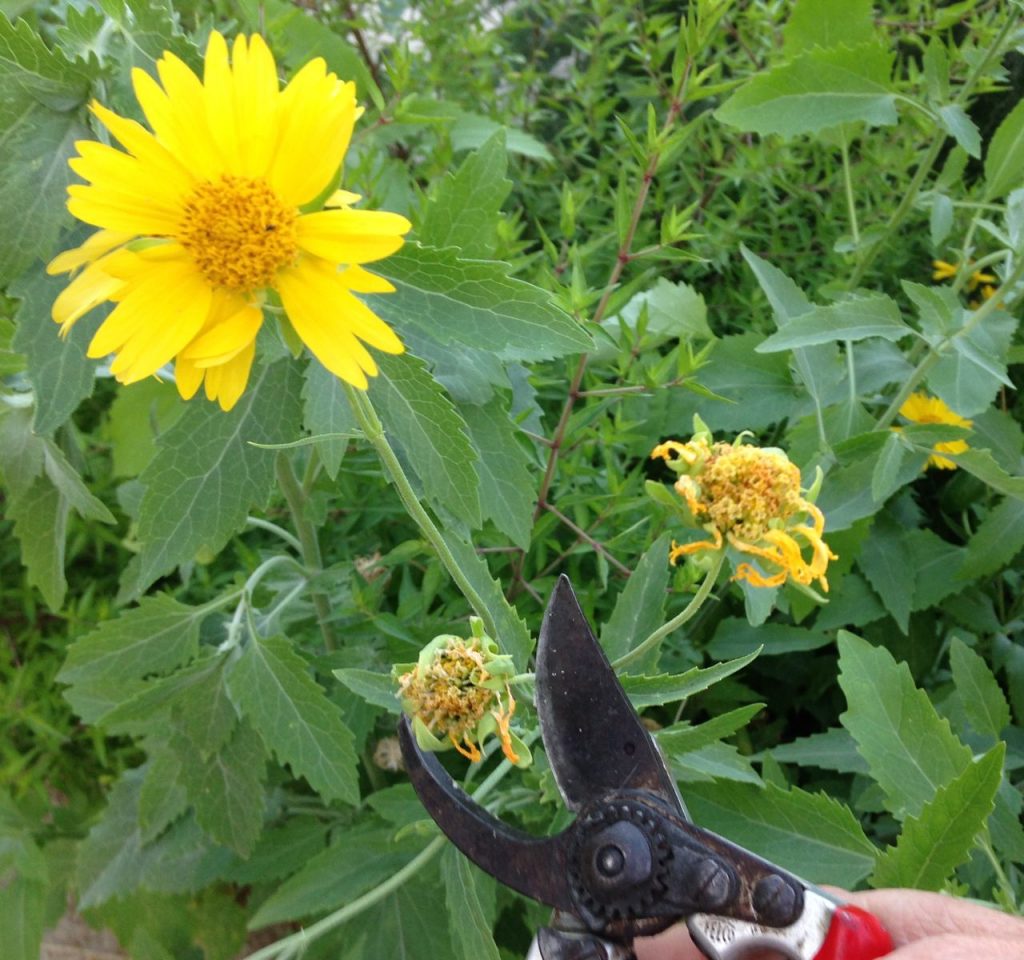 Don’t forget to deadhead. It will make for more blooms. Photo by Monika Maeckle

One more thing:  don’t forget to deadhead.    The old “green thumb” exercise means removing spent flowers before they go to seed so that the plant will continue to produce blooms.  This encourages a steady supply of flowers for visiting pollinators to slurp nectar, gather pollen, and transfer it to the next plant, all why furthering the life cycle.
Related posts: