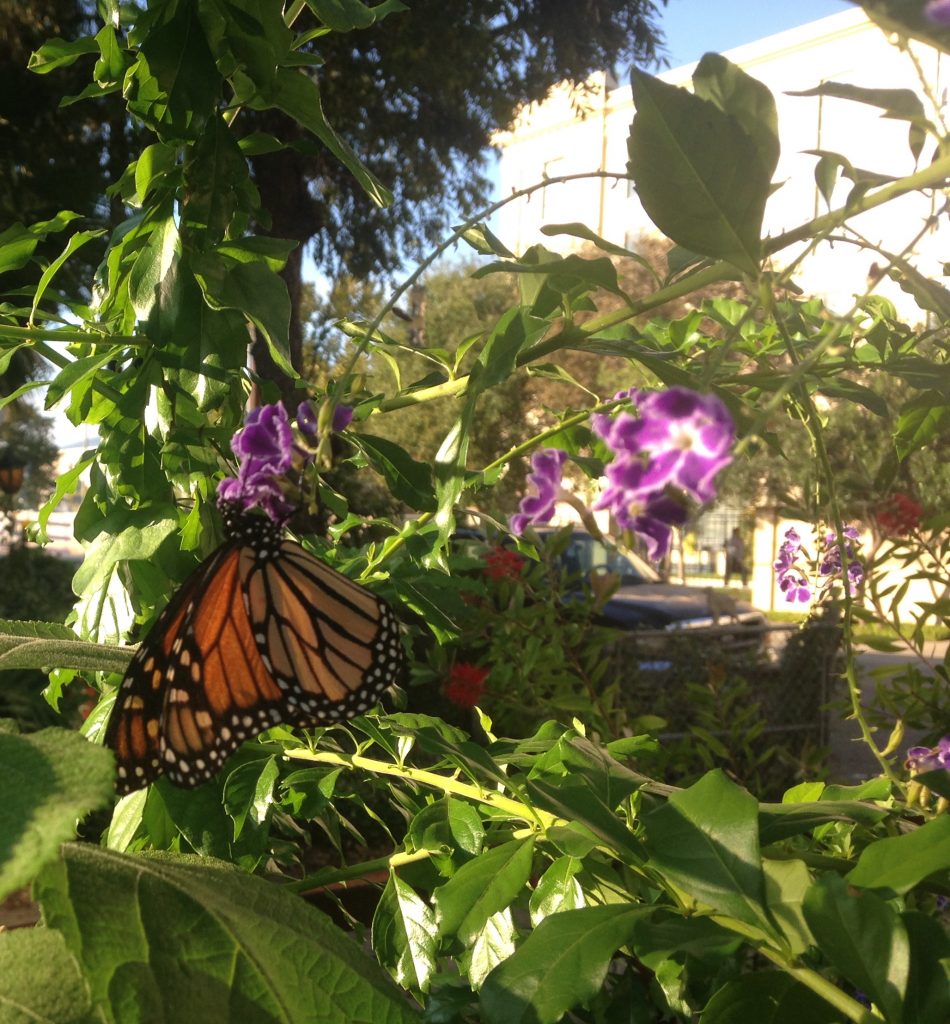 Nov. 12,. 2015: Monarchs still visiting my San Antonio garden, this one on Duranta. Photo by Monika Maeckle

That’s not to say we don’t sometimes have Monarchs visiting this late in the season. We do.  In fact, we’ve had many questions from folks up north about what to do with late hatching Monarchs when the weather turns cold. A previous post addresses that. But I don’t ever recall having this many Monarch butterflies this late, and so consistently.
“Yesterday, I saw hundreds of Monarchs in Austin,” wrote John Barr of Native Cottage Gardens in Austin on November 1 in a post to the DPLEX list, the old school email listserv that reaches about 800 butterfly enthusiasts.  ” I saw more Monarchs in 30 minutes than I’ve seen all year. Bright, fresh, long-winged migrating Monarchs of both sexes.”
Monarchs were even spotted recently as far north as Lake Erie, according to Darlene Burgess of Point Pelee, Leamington, Ontario. “There are still Monarchs being seen in Ontario on Lake Erie’s north shore. This week’s warm temps up to 70° should get them south across the lake,” she wrote November 2 on the DPLEX list. 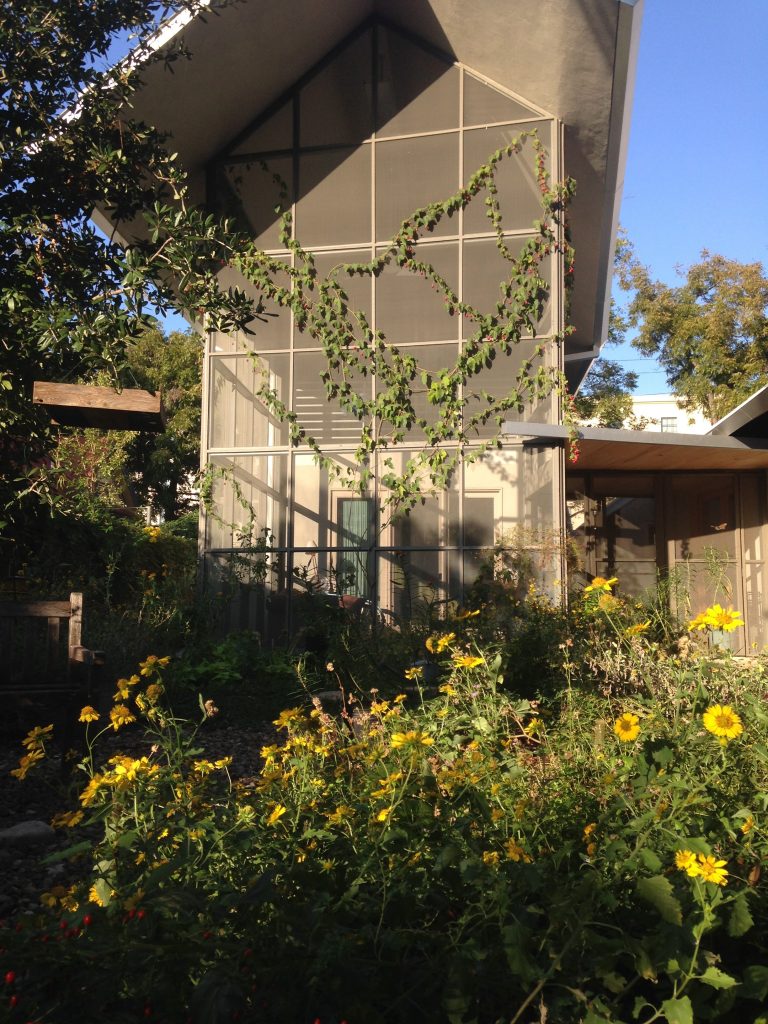 Late season blooms continue to attract Monarchs and other pollinators to my urban San Antonio garden. Photo by Monika Maeckle

Our friends at the Natural Gardener in Austin, which stocks several kinds of native milkweeds, said they’ve had a steady stream of Monarchs visiting as well. “They LOVE the Duranta,” said Curt Alston, buyer for the organic nursery. Alston added that he has plenty of caterpillars and chyrsalises on the native milkweeds, and that adult Monarchs are still breezing through the aisles.
What gives?
Climate change.  September 2015 was the hottest month in recorded history.  October ranked the fourth hottest.  Overall, 2015 is likely to be the hottest year ever, says the New York Times.
Warmer temps mean extended growing seasons.  Plants that typically wouldn’t thrive when fall arrives will continue to grow and bloom, creating more nectar for migrating Monarchs, and in some cases, host plant.
Increased temperatures also mean that Monarch butterflies will likely break their diapause–that is, their asexual state of resisting reproductive activities so as to conserve energy for migrating to Mexico.   Once Monarchs reproduce, they don’t migrate. 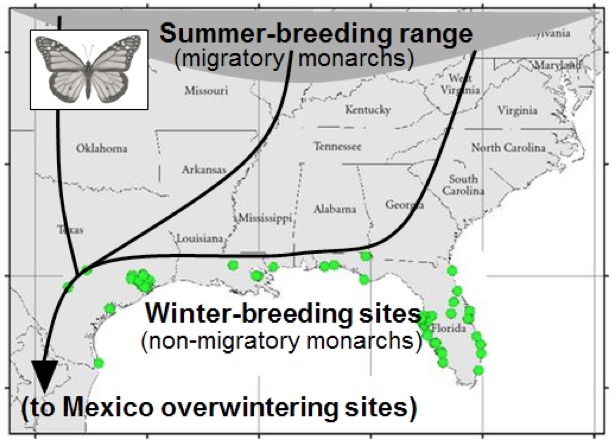 “We’ve got to get used to the late Octobers and Novembers as part of our future,” said Dr. Chip Taylor, founder of Monarch Watch, the citizen scientist tagging program operated by the University of Kansas at Lawrence.
Taylor predicts that a larger proportion of these late Monarchs will be unable to maintain their diapause and become reproductive.  “Their hormones work on the basis of temperature.  It’s very delicate and complicated,” he said via phone.  “The warmer it is, the more likely it is the Monarch will not be able to maintain a diapause.”
Hmm.  So where does that leave butterfly gardeners?  Should we encourage egg laying with native or clean Tropical milkweed, or just let all those good eggs go to waste? 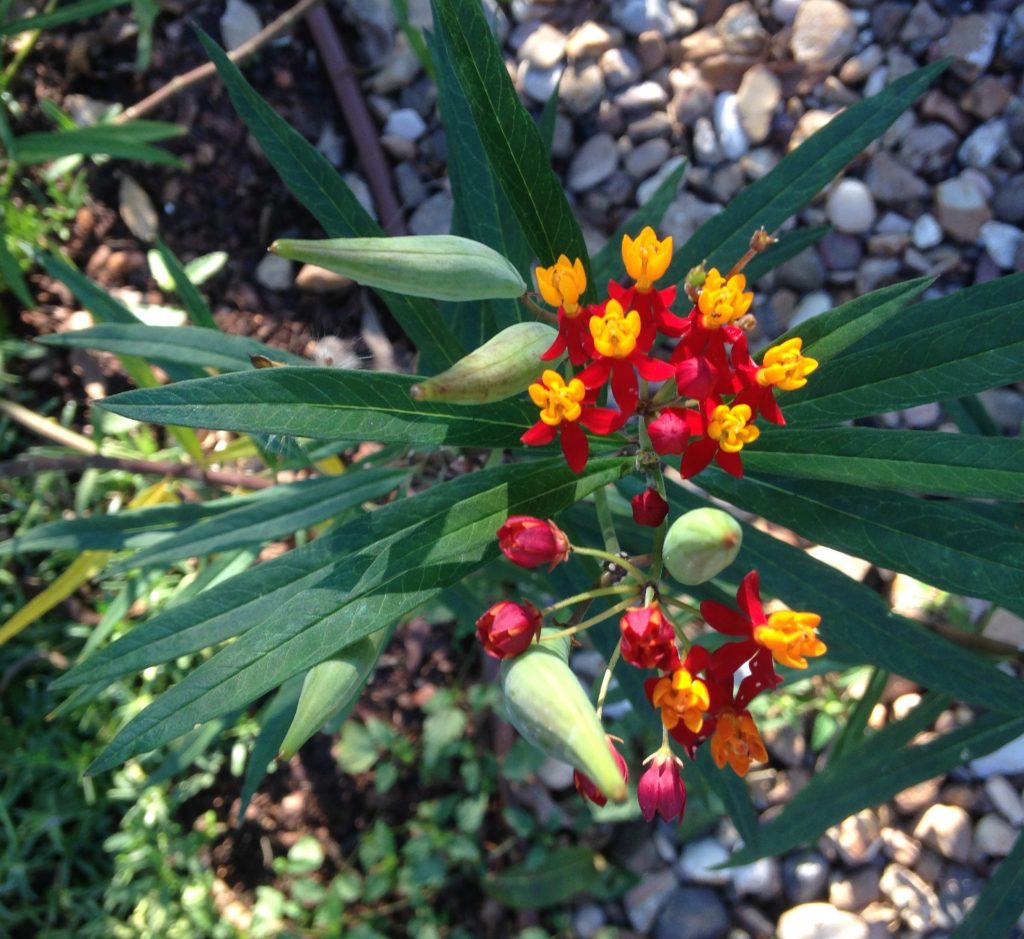 Tropical milkweed: cut it to the ground in the fall to prevent build-up of OE spores. Photo by Monika Maeckle

Research from scientists like doctoral student Dara Satterfield and Dr. Sonia Altizer out of the University of Georgia indicates that the year-round availability of Tropical milkweed makes Monarchs more prone to contracting Ophryocystis elektroscirrha, a debilitating protozoan parasite commonly known as OE in Monarch butterfly circles.  Since OE spores transfer via physical contact between creatures or the plants on which they rest or eat, having year-round milkweed which is visited repeatedly by Monarchs and other butterflies creates a hotbed of these nasty spores and spreads the disease.
Satterfield, et al, suggest hard-to-find native milkweeds should be planted rather than the technically nonnative Tropical milkweed, which is widely available and easy to grow.  Best practice dictates close management of Tropical milkweed.   Cut it to the ground late in the season so OE spores don’t build up and infect migrating Monarchs. 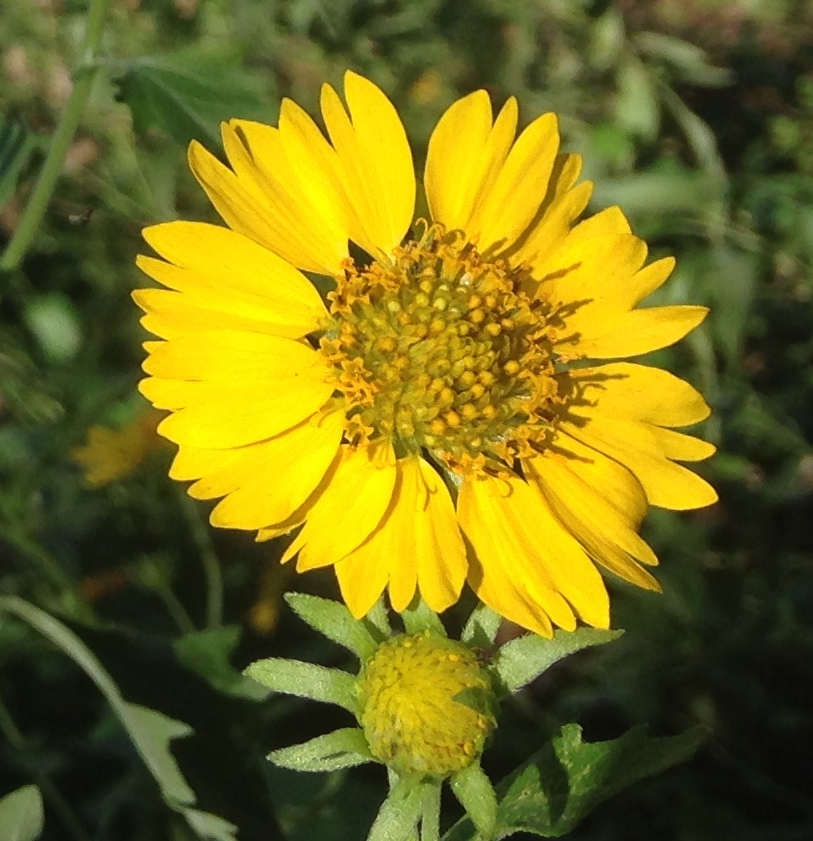 But what about all the other plants that Monarchs frequent?  In my yard, the native Swamp milkweed continues to thrive and various nectar sources have been repeatedly visited by Monarchs and other butterflies since April.  As the Natural Gardener’s Curt Alston said above, Monarchs are loving the lush, purple bloom of Duranta that laces my fence perimeter.  They also repeatedly visit my golden-yellow, late season Cowpen daisies.
Wouldn’t these plants also host the same debilitating OE spores so closely associated with late season Tropical milkweed after so many return visits from Monarchs?   Should we cut those plants down as well, to avoid infecting visiting flyers?
Scientists, what say you?