Sound artist Rob Mackay and a group of academics, artists, scientists and technicians recently installed a streaming device at Cerro Pelón in the mountains of Mexico, one of four monarch butterfly sanctuaries open to the public. 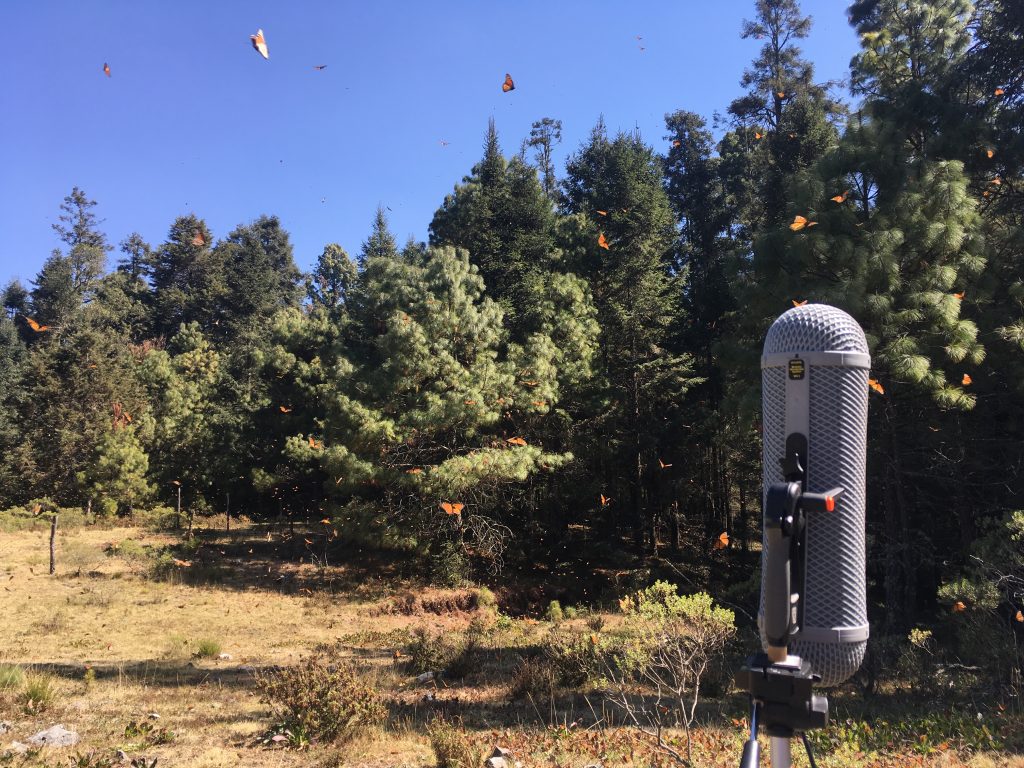 The result of that collaboration is that anyone, anywhere, can eavesdrop on the remote stretch of mountain plain where millions of monarch butterflies gather each fall to wait out the winter. You don’t even have to make the hike to 11,000 feet. Try it at this link on just about any browser but Safari, which seems to block the stream’s ability to load.
You’re likely to hear birds chittering, flies humming, the occasional whir of an airplane or engine, and the sometime sound of monarch butterflies moving through thin mountain air. The live stream makes for soothing, natural white noise and a welcome soundtrack for work, play or relaxation. It also helps scientists monitor changes over time which allows for useful assessment of the ecosystem’s health.

Monarch butterflies are the stars of the show at UNESCO’s Biosphere Soundscape project at Cerro Pelón, but the sounds of other creatures also contribute to the soundtrack . Photo by Rob Mackay

The project is an extension of Biosphere’s Soundscapes, an acoustic ecology initiative run in collaboration with UNESCO’s 669 biosphere reserves in 120 countries. The program aims to inspire communities to listen to the environment and explore the value of sound as a measure for environmental health, an idea posed in 1962 by Rachel Carson. Her landmark book, Silent Spring, put forth the notion that natural sounds can serve as indicators of environmental health. At the time of its publication, the book detailed the use of pesticides that were massively killing songbirds, a phenomenon that would some day lead to a “silent spring.” 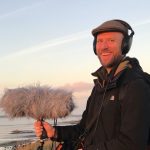 Mackay, a composer, sound artist and senior lecturer at the University of Hull in East Yorkshire, England, spearheaded the project at Cerro Pelón.Mackay tripped upon monarch butterflies in March of 2015 when he was invited to present at the Mexican National Centre for Music and Sonic Arts in Morelia.
“One of my ecology colleagues mentioned to me that the monarch butterfly overwintering grounds were very close to Morelia,” Mackay said by email. “He told me about their amazing migration and life cycle. I was immediately intrigued and went online to do a little more research. A few links mentioned the sound made by their rushing wings, so I was inspired to try and capture the sound.” On that trip, Mackay visited El Rosario, the most frequently visited sanctuary in the Monarch Butterfly Biosphere Reserve.
Later in 2015 at a conference, Mackay met Grant Smith from SoundCamp, the people who supply the streamboxes for streaming soundscapes in real-time over the internet. He also met Leah Barclay, a sound artist who oversees the Biosphere Soundscapes project. 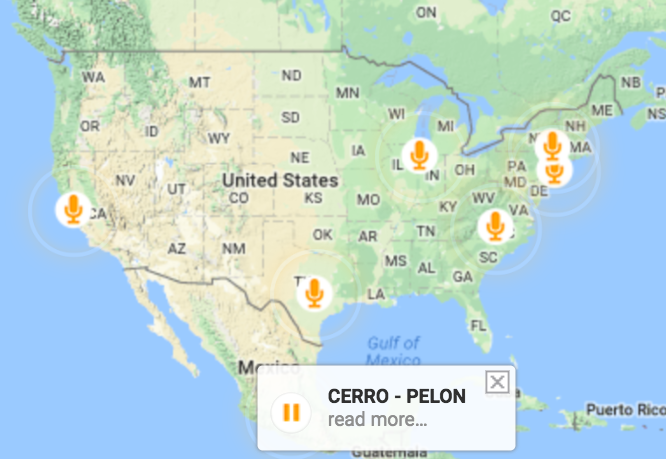 The Biosphere Reserve Soundscape at Cerro Pelón is one of two streams in Central America featured on the Locus Sonus Soundmap. There are another eight streams in North America.

Mackay proposed installing a streambox in the Cerro Pelón colony to help scientists monitor the ecosystem there and engage people around the world with monarch butterflies through sound. He ran the idea by monarch butterfly expert Lincoln Brower in Virginia. Brower blessed it.
Mackay said the project accelerated once Pablo Jaramillo, a professor at the National Autonomous University of Mexico in Morelia, got involved. Jaramillo, as the local scientific advisor and contact, was able to rally forces and put the team in touch with arborists at Cerro Pelón as well as Franco Ramirez. Ramirez managed the practically impossible task of arranging an internet connection to the remote mountain village of Macheros, population 350. Solar panels also had to be installed to provide electricity. 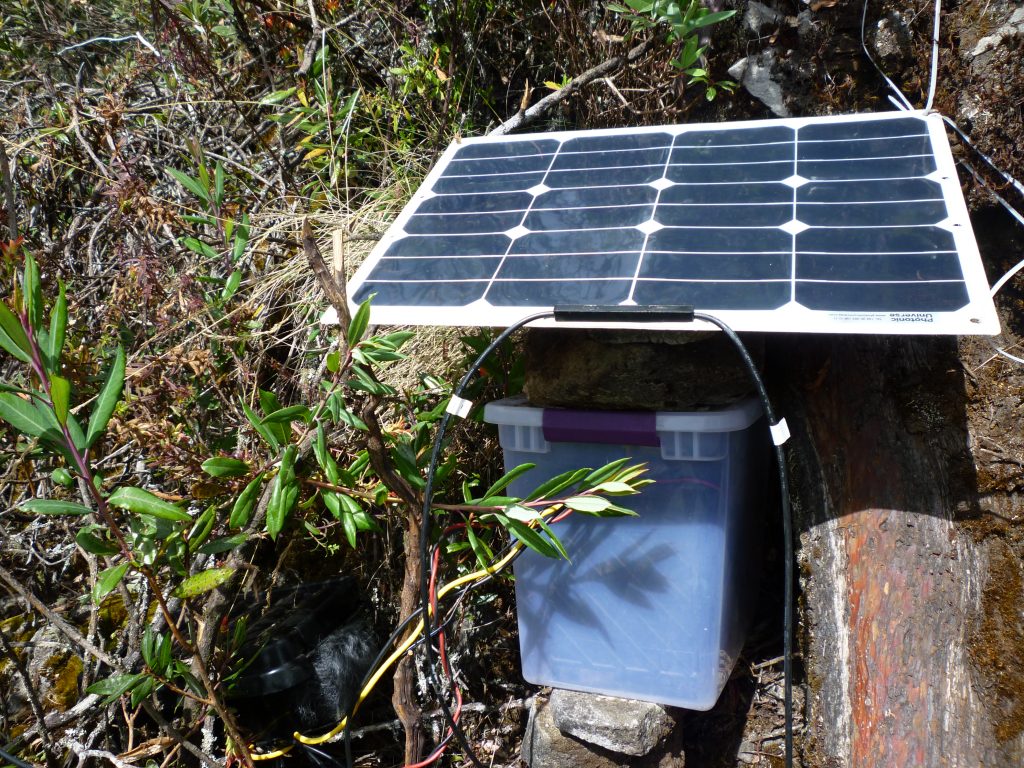 How the magic happens: stream box and solar panel. Photo by Rob Mackay

A five-day trip to Cerro Pelón in January got the job done. It also produced enough material for the collaborators to assemble an album/DVD of the process and several spontaneous musical performances and poetry readings spawned by the adventure.
Once the live stream was activated, Jaramillo shared the news with Chip Taylor, founder of Monarch Watch at the University of Kansas, the organization that orchestrates the wildly popular monarch butterfly tagging program for citizen scientists across the Americas. Taylor shared the development on the DPLEX list, an email listserv that reaches about 800 monarch butterfly followers including scientists, citizen scientists, hobbyists and commercial butterfly breeders.
Streaming the sounds of butterfly wings poses many technical challenges–special pre-amplification to the streamboxes, arranging reliable, affordable solar power and keeping the internet connection up and running. As the DPLEX community swarmed the sound map site, the connection failed, perhaps overwhelming it. But by week’s end, thanks to Team Monarca, it was back up.

How does acoustic artist Mackay describe the unique, subtle sound of millions of butterflies wings moving and what musical instrument would he use to replicate it?
“A little like a crackling fire, or crape paper being rustled,” said Mackay. Replicating the sound with instruments would be a challenge, but “working with a local choir and getting people to replicate the sound using their voices and bodies” might come close. “Perhaps several rain sticks and other percussion.”
UPDATE: Mackay and Jaramillo advise patience with the stream, as it is still in the pilot stage. If you click on the link and hear nothing, try again later.