Public hearing in Austin: “Texas beekeepers relying on honey production are in peril”

A public hearing at the Texas State Capitol on Wednesday brought together dozens of experts and legislators to discuss the declining monarch butterfly and bee populations in the state. Agriculture, tourism, recreation and hunting all rely on the free ecosystem services provided by the insects and other wildlife that make one of every three bites of our food possible.

About 50 people attended the public hearing assembled at the Texas State Capitol to discuss monarch butterfly and bee decline. Photo by Mike Quinn

About 50 people moved in and out of the hearing, over the course of its two hours.

The pending listing of the monarch butterfly, Denaus plexippus, as “threatened” under the federal Endangered Species Act (ESA) arose repeatedly as a timely prompt in addressing shrinking butterfly and bee numbers and habitats. The species was submitted for ESA consideration in 2014 and a ruling is expected by June 2019.

What would happen if the Americas’ favorite butterfly is listed?

“Nobody knows the answer to that,” said Ben Hutchins, an invertebrate specialist for the Texas Parks and Wildlife Department (TPWD), who opened the two-hour session.  “If you drive a car down the highway and you hit a monarch butterfly are you in violation of the ESA? People are working hard to prevent that listing in terms of proactive conservation,” he said. 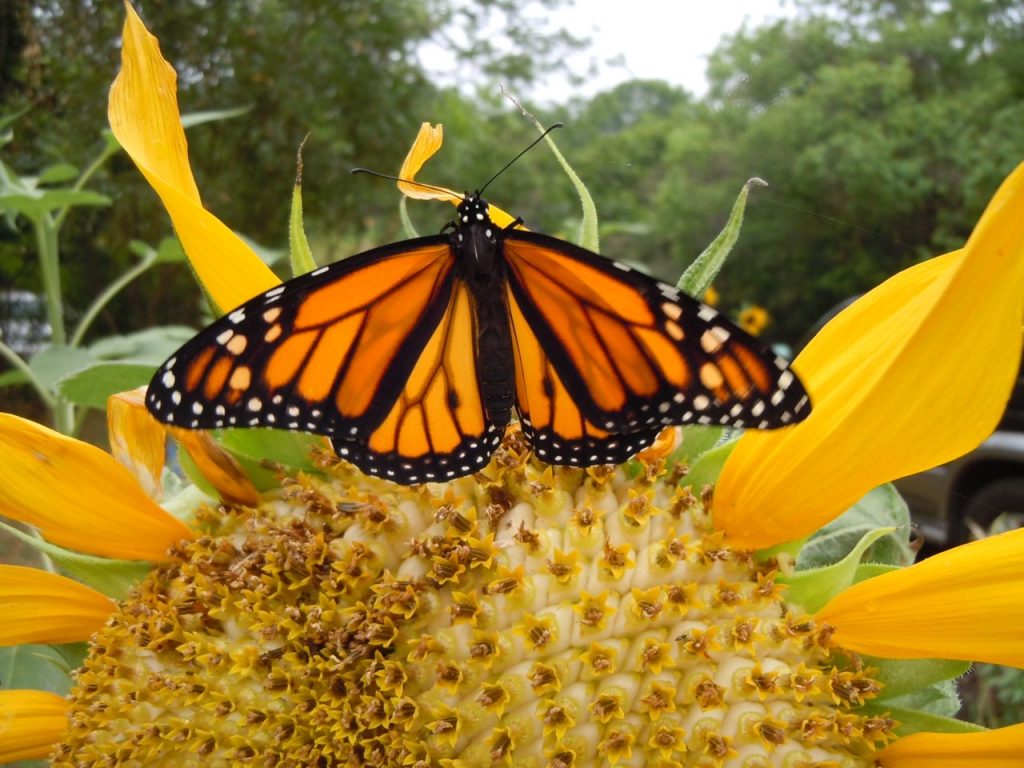 Several speakers suggested that since more than 95 percent of Texas land is owned privately, landowners can play a significant role in pollinator habitat restoration.

“We can do something about habitat loss,” said Iliana Peña, the Texas Wildlife Association’s director of conservation programs. “It’s not an either-or situation.”

Another topic of discussion was the 1-D-1 tax designation, which allows landowners to request that their land be valued as wildlife habitat in exchange for property tax breaks. The designation requires landowners to work toward increasing wildlife and habitat diversity by undertaking specific conservation tasks. Those include conducting a bird and/or deer census, restoring riparian areas with native plants, controlling invasive species like Ashe juniper, and installing and maintaining native plants and prairies as pollinator habitat.

Megan Hope, a policy analyst for the Texas State Comptroller’s Office, provided an overview of the program her office has been conducting for the past three years. The office was tasked in 2015 with assessing the economic impact listing the monarch butterfly as threatened would have on the Texas economy.

Since, the Comptroller’s’ Office has awarded $800,000 to Texas universities to study the monarch, including a $300,000 grant to the University of Texas at San Antonio.

Hope said final results of the research will be shared with the U.S. Fish and Wildlife Service in August.

After monarch butterfly experts presented their updates, members of the beekeeping community reported on the status of honey bees.

Mary Reed, chief apiary inspector for the Texas Apiary Inspection Service, ticked off the challenges for commercial bee keepers in the state: foul brood, a fatal spore driven disease; varroa mites; and nosema. Reed said Texas beekeepers reflect the national averages for mites, which is the No. 1 threat to honey bee colonies.

It wasn’t always so, said Walker, who grew up in McAllen and has been keeping bees for 50 years. Before big freezes hit citrus groves in the 1980s, honey made from orange and grapefruit blossoms was the most prized nectar product. “It’s not even on the radar today. … Orange blossom honey doesn’t even gain shelf in the grocery store.”

Nonnative Chinese tallow is the plant responsible for the majority of Texas honey. Courtesy photo

The most productive and profitable honey crop results from the invasive Chinese tallow tree, labeled a noxious weed by the state of Texas. “It’s the mesquite of the Gulf Coast plains,” said Walker. “It will take [over] a pasture. It’s the No. 1 honey-producing plant in Texas.”

Walker added that without Chinese tallow, honey production in Texas would be cut in  half.

“Texas beekeepers relying on honey production are in peril,” he said, adding that commercial bees are typically not in Texas to produce honey. Most Texas bees start the year in California pollinating almonds, he said. “Our fate’s not even in our own hands,” he said.

“God made cotton to produce honey,” he said. “Now we’ve bred the nectar out of it. Now we don’t attract the beneficial wasps that eat the boll weevil, and we don’t get cotton honey.”

While we often focus on the importance insect pollinators play in our food, Shalene Jha, an associate professor of  integrative biology at the University of Texas at Austin, stressed the importance of insect pollinators to crops like cotton. South Texas accounts for about 15 percent of the state’s cotton production, which is the most economically valuable nonfood crop in the world. Texas alone produces 25 percent of U.S. cotton.

Bee on cotton flower. Photo by Ton Rulkens via Wikipedia.

In studies she conducted working with landowners across Texas, cross-pollination made possible by insect pollinators – even in self-pollinating crops like cotton – yielded higher boll sizes, increased weight and more profit for farmers.

Cotton bolls were 18 percent heavier when pollinated by insects versus self-pollination, said Jha. “The per-boll increase equals $118 per acre more in profits,” she said, adding that similar results occurred with melons and blueberries.

The session ended with a report on a partnership between a Canadian oil company and the Texas Native Seeds project at the Caesar Kleberg Wildlife Research Institute to develop local ecotype native plant seeds for use in pollinator habitat restorations.

Canadian oil company Enbridge Corp. announced in January it would work with Forrest Smith, the seed project’s director, to develop local ecotype seeds for a 42-mile segment of the company’s Valley Crossing Pipeline, which runs through the King Ranch and Kenedy County in South Texas. The pipeline right-of-way will double as a “pollinator pathway” for migratory monarch butterflies and other wildlife, said Devin Hotzel, an Enbridge official.

Enbridge awarded a $100,000 grant to the Caesar Kleberg Wildlife Research Institute  to develop appropriate local ecotype seed mixes to be used in the restoration. The partnership convinced other landowners to participate.

Since the announcement of the restoration initiative, colleagues in the oil industry have expressed interest in replicating the effort, he said.

“They’re interested in what we’re doing – not what it cost, but how to do it, too,” he said. “It’s a testament to the power of industry and the community to work together to provide solutions.”

NOTE: A version of this article first appeared in the Rivard Report.