Recent rains and a campaign to get Cowpen Daisies into area gardens as San Antonio’s “unofficial” pollinator plant of the year appear to have spawned an early crop of Bordered Patch butterfly caterpillars in the Alamo City.

A mound of Chlosyne lacinia caterpillars appeared early this week on Cowpen Daisies along the San Antonio River and around town. Typically, we don’t see the petite orange, charcoal and gold flyers in our urban gardens until later in the season. 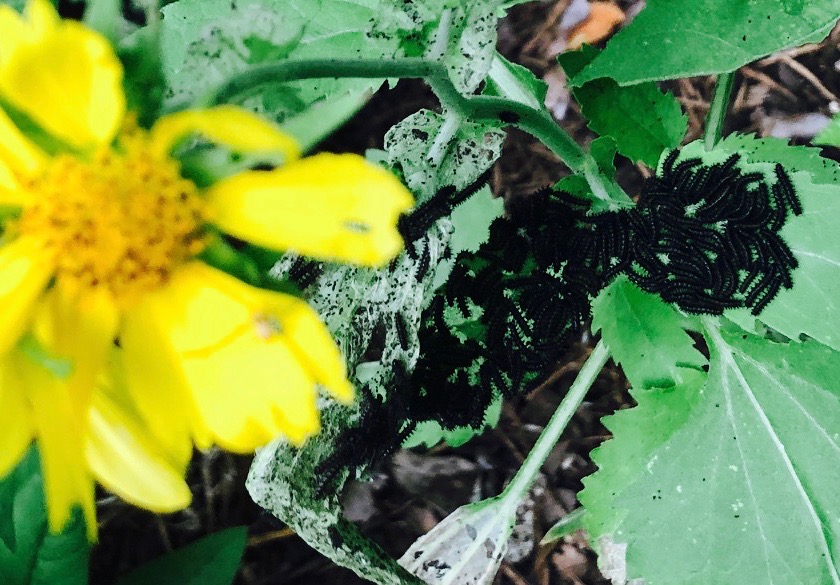 As members of the Nymphalidae family, Bordered Patch rank as the most abundant member of their genus, found from the southern United States to Bolivia and Argentina.

Unlike their more celebrated monarch butterfly cousins, which lay their eggs one at a time, Bordered Patch lay up to 500 eggs in one heap. They host on sunflowers, nettles, verbenas and yes–Cowpen Daisies. “I’ve got them on Frostweed and sunflowers,” said Drake White of the Nectar Bar. “Glad I have the Cowpen Daisy covered.”

After a few days, the mound of yellow eggs turns dark, then they hatch into yellowish caterpillars. As they devour the leaves of their host plant, they darken and show harmless charcoal black bristles on a dark orange background. The gregarious feeders create intriguing mounds of life on the plants that feed them and leave skeletonized foliage riddled with silk webbing in their wake. 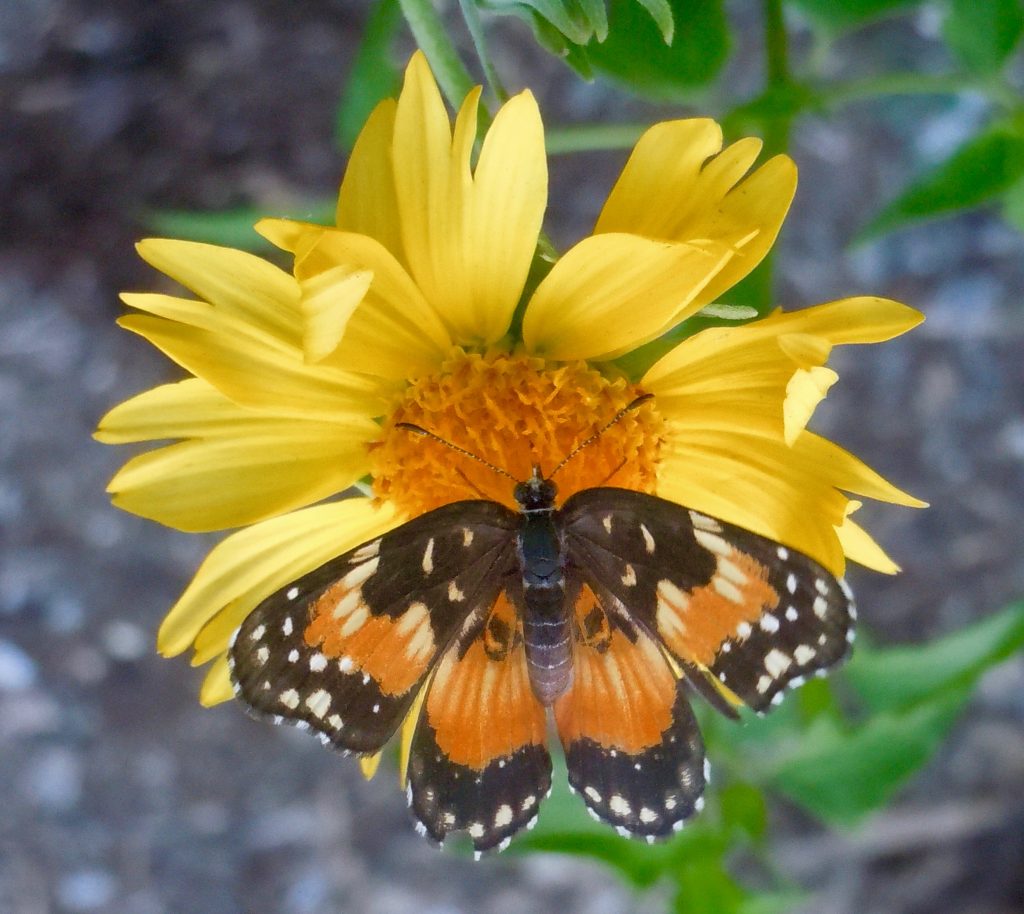 According to a 1970 paper by Drummond and Emmel, the yellow larvae of the egg masses hatch simultaneously. The tiny caterpillars consume the empty eggs, then start feeding on a thin silken web in a packed mass on the underside of the host plant leaf.

“When disturbed, first and second instar larvae frequently will begin a synchronous jerking movement of the body. The function of the web is not known, but it may possibly help to maintain colony unity and protect the larvae from some predators and parasites.”

The life cycle from egg to butterfly takes 35-45 days, depending on conditions, and includes a pearly, black speckled chrysalis that can vary greatly in appearance.

According to organizers, the sale was the most successful ever, placing more than 1,700 native plants with local gardeners–twice the usual volume. “A lot of well-informed people 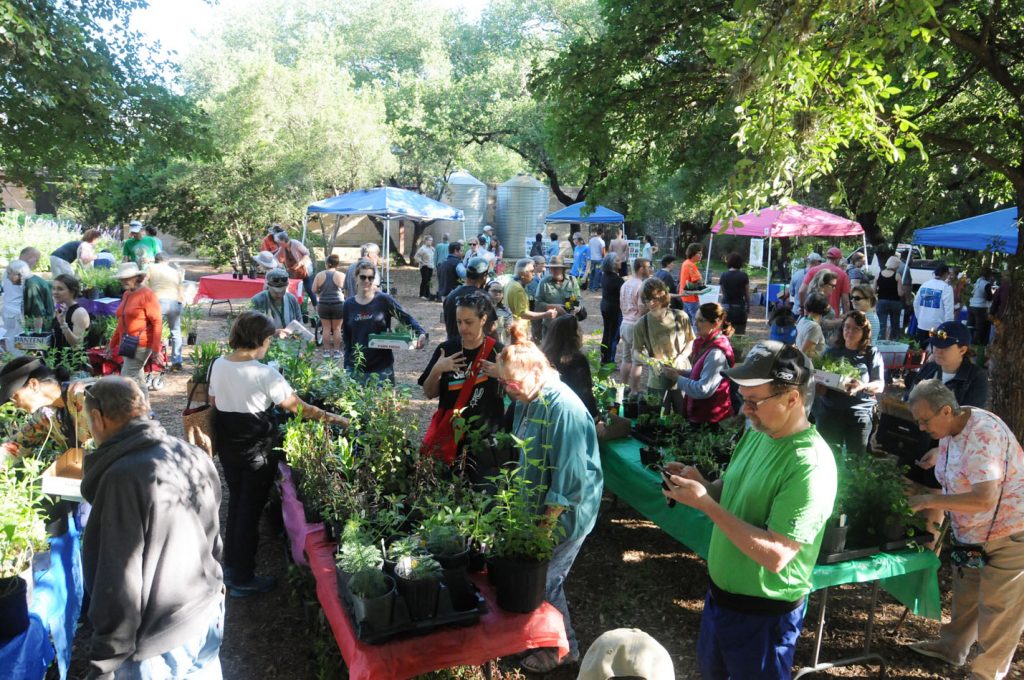 shopping with their plant lists and hungry for native plants” showed up, said Joan Miller, San Antonio NPSOT board member and sale organizer. Few plants were left after the three-hour event, she said.

The 300for300 campaign aimed to help San Antonio make good on a promise to the National Wildlife Federation (NWF).

As the nation’s first Monarch Butterfly Champion City under the NWF’s Mayor’s Monarch Pledge, San Antonio committed in 2015 to stage a community wide pollinator gardening initiative as one of 24 action items. Since the City celebrated its Tricentennial in 2018, we figured creating 300 new pollinator gardens for San Antonio’s 300th birthday made sense.

While 300for300 started as a local campaign, it has since grown to include pollinator habitats in California, Laredo and Round Rock, Texas. Several readers have shared photos of their installations and the pollinators who now frequent their yards. 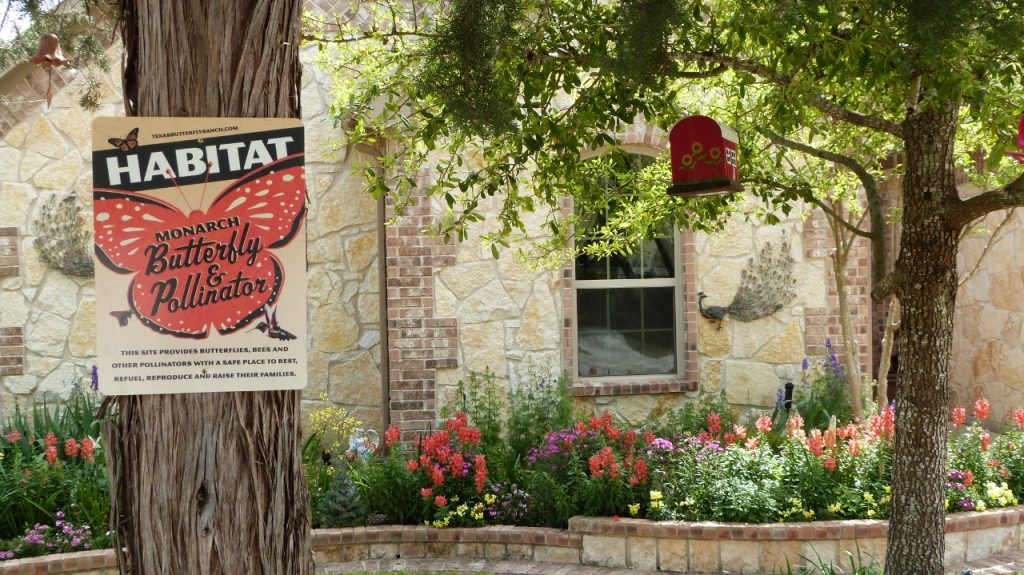 Candy Roach’s 300for300 pollinator habitat has taken off this spring. Photo by Candy Roach

Reader Candy Roach sent us an email last July just as she was beginning her pollinator gardening effort. “The plants are finally starting to bloom and we’re seeing mostly Queens and Swallowtails right now along with a wide variety of bees and wasps,” Roach said. “By next year I hope the plants start to take off and enjoy their new home.”

She sent an update last week that included the photo above. To Roach and other pollinator gardeners, keep up the good work!

Want to add a sign to your pollinator habitat like the one in Candy Roach’s garden above? Check out our shop.