From seed to harvest, ornery agarita a challenge, but worth it

Fans of the evergreen bush known as agarita enjoyed a spectacular season this year, but hot temperatures are bringing agarita season, and the availability of its tart red berries, to an end.

Casey has been harvesting agarita berries from the hedge of his bungalow for more than 20 years. He relishes the fruits, sometime called wild currents, tucked into the prickly shrub.

“I just get in a Zen mood like I’m counting beads,” said Casey, who collects the sweet-and-sour fruits barehanded. “The leaves themselves are firm and pointed like little needles. … It doesn’t reach the threshold of pain, but it is discomfort.”

The bush forms thickets in the Texas Hill Country, as in the picture below. Clusters of fragrant, yellow flowers appear in February and batches of the red berries follow in April and continue ripening into June.

Agarita berries are the fruit of the most common species of barberry found in Texas. The stickery bush is among the first to bloom in the spring. Its fragrant yellow flowers serve as one of the earliest available nectar sources for bees and butterflies.

The plant’s thorny, five-pronged leaves also rank it high on the list of our state’s most ornery shrubs, so gathering its fruits calls for determination and a certain level of pain tolerance.

Agarita’s defensive prowess and multiple uses are undeniable. Foragers use agarita berries in tarts, pancakes, and cobblers or convert them into jelly, syrup, and juice. 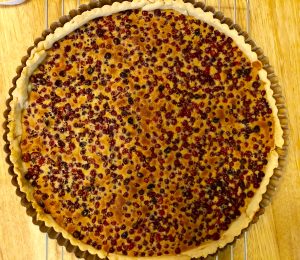 Agarita seems to be a favorite of many beetles and bugs, as well as preferred fodder for birds, raccoons, opossums, and other wildlife. Deer don’t touch it, probably because they can’t get to the fruit without being stabbed. Texas state botanist Chris Best quantified agarita berry fans as “every frugivorous critter that can get its mandibles on them.”

Some speculate the plant’s name hails from the Spanish word agria, which means sour. But Kelly Lyons, a biologist at Trinity University and native plant expert, believes agarita comes from agarrar, to grab, in Spanish.

Pasztor lauds agarita’s potential as a barrier plant. She recalled how proprietors of the Tobin Estate in San Antonio used it as a protective perimeter hedge. “They would prune it periodically, but imagine: a blooming and fruiting hedge that’s pretty impenetrable,” she said. “Some people plant it by their teenager’s windows.”

The Foraging Texas website cites the many uses of agarita. Its plentiful seeds can be roasted and ground for a caffeine-free coffee substitute. Other ethnobotanical sources praise agarita’s myriad uses: leaves can be chewed to prevent nausea, wood can be boiled to make dyes, and roots utilized to fight fungi and bacterial infections.

“One gentleman told me that his mama used to grind up agarita root and sprinkle it in his shoes for athlete’s foot,” Pasztor said.

Unfortunately, agarita is not widely available in nurseries. If you find yourself smitten with this plant, you’ll have to check out native plant sales, shop at specialty nurseries, grow it from seed or transplant from the wild. 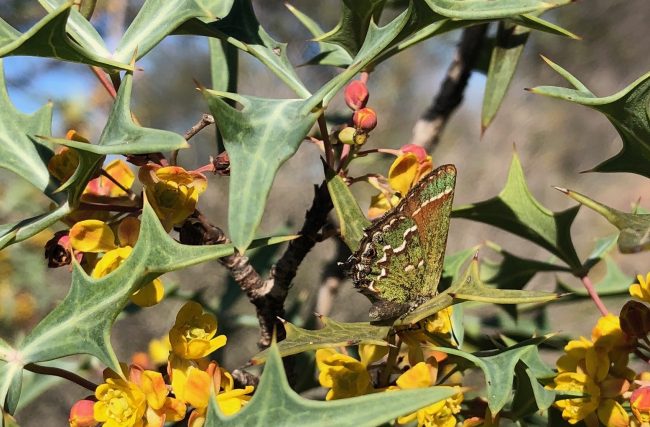 One of the first blooms in spring, Agarita draws bees, butterflies and other insects. Here, a Juniper Hairstreak. Photo taken on Feb. 27, 2019 by Monika Maeckle

Our friends at the Ladybird Johnson Wildflower Center suggest if you move agarita from one location to another, to first put the plant in a pot for up to a year to stabilize it.

“Moving them is a sketchy endeavor regardless,” said Andrea DeLong-Amaya, the Austin-based center’s Director of Horticulture. “The best chance you’d have for transplanting is to dig up small plants (the smaller the bettier) and get as much of the root as possible.”

DeLong-Amaya suggested “mudding them in,” which is to dig a hole, place the plant in it, then simultaneously fill the hole with soil and water.

“This creates a slurry which settles around the roots better than just re-filling the soil into the hole and watering afterward,” she said, adding that “your best chance is to grow them from seed.”

According to How to Grow Native Plants of Texas and the Southwest, growing agarita from seed takes three years to produce a five-gallon plant. Fruit will follow, but the timing of that is unpredictable, and depends largely on light, temperature and water. Well-drained soil is a must. Seeds are available online, but be sure to get Mahonia trifoliata.

Some would argue that the toughest part about loving agarita is getting the berries off the bush.

The classic harvesting approach is to lay a sheet on the ground and beat the bush with a broom. A more efficient method: Place an umbrella under a branch flush with berries and comb the spindly ream, from the inside of the bush out, since the prickly leaves face outward. Wear protective, elbow-length gloves.

Have you taken our poll? Please do.

Inevitably, twigs, agarita leaves, dirt, organic matter, and numerous insects will accompany your berry harvest. Once you have your bowl of berries, pick out the detritus. Piling a cup or so of berries on a small mesh screen – such as a spatter screen – while tilting and shaking slightly also can serve to separate the fruit from unwanted debris. Casey dumps the berries on a sheet in front of a floor fan.

“I turn it up to hurricane speed, and that just blows out the leaves and detritus,” he said.

Got agarita stories or recipes to share? Leave them in the comments.

TOP PHOTO: Agarita berries. The plant is beloved by creatures of all sorts, including this beetle. Photo by Monika Maeckle