Here’s what to do with late season butterflies: Let them be

The question of what to do with late season butterflies can be problematic. Should we bring them inside or let Nature take her course?

The question arises frequently in late fall, when temperatures vacillate wildly. San Antonio saw temperatures span 50 degrees over the last week, from 82 last Wednesday to 32 a week later. It’s no wonder insects might be confused–time to migrate or just reproduce here?

The extremes have provoked myriad requests for advice, as seen in the screenshots that accompany this post. One reader sought advice on what to do with 11 monarch and Queen caterpillars found in her Hill Country garden.

“Are there other steps I can take to give these ‘late bloomers’ their best chance?” asked Jackie Garrow, near Marble Falls, on November 2.

Just days later, another reader reached out via Facebook to ask if the Texas Butterfly Ranch accepts overnight shipments of butterflies stranded up north. The answer is no. But Chloe Urban of Newport, New Hampshire, just wanted to give a late hatching monarch “a chance.”

For those who love butterflies and enjoy raising them at home, late season butterflies are a mixed bag. On the one hand, as long as host plant is available, butterflies will lay eggs, resulting in caterpillars and future flyers. That means more butterflies, even in November and December. With our climate getting warmer, this is likely to happen more often.

The tough part comes when the butterflies hatch and it’s freezing outside. Generally, butterflies won’t fly when temperatures are less than 60 degrees.

So what’s a butterfly lover to do?

“Do like the great Beatles song suggests: Let it be,” said Anurag Agrawal, author of Milkweed and Monarchs and an award winning chemical ecologist and professor at Cornell University. Scientists seem pretty much in agreement on this, and I must say my own thinking has evolved from this post I wrote in 2013 to agree with them.

*The late caterpillars are the ‘living dead,”’ said Agrawal. “They don’t have a chance and there is no sense in us tinkering with nature.” It’s part of the natural cycle, he explained, and they’ll become food for others or fertilize the ground.

Migration expert Andy Davis agreed. “I can give you my answer to these types of questions, but your readers will not like it one bit: leave them alone,” he said.

Davis, a research scientist in the University of Georgia Odum School of Ecology and Editor-in-Chief of Animal Migration who specializes in conservation physiology, said he always sides with natural selection. “Natural selection is the tool that mother nature uses to allow populations of animals, plants or insects to adapt to changing environments. But, it only works if we let it.”

What about transporting a late season butterfly via overnight mail to a more friendly climate so it can join the migration?

Both scientists see such action as problematic. “Shipping them takes an enormous amount of fuel and effort,” said Agrawal. “Instead we should be spending our time and money toward educating, naturalizing, and conserving,”

“I know that the people asking these questions really want to help, but really, this should be a teaching moment for them (about the way nature really works),” said Davis. A 2016 post he wrote on his MonarchScience blog about what to do with straggler monarchs delved into this topic directly.

“Stragglers are stragglers for a reason,” said Davis. “If we allow them to survive in the population, then their ‘straggler’ genes will be passed on. This weakens the entire population (genetically). Similarly, should we allow monarch eggs that were laid way too late to become adults to survive? Mother nature would have removed these.” 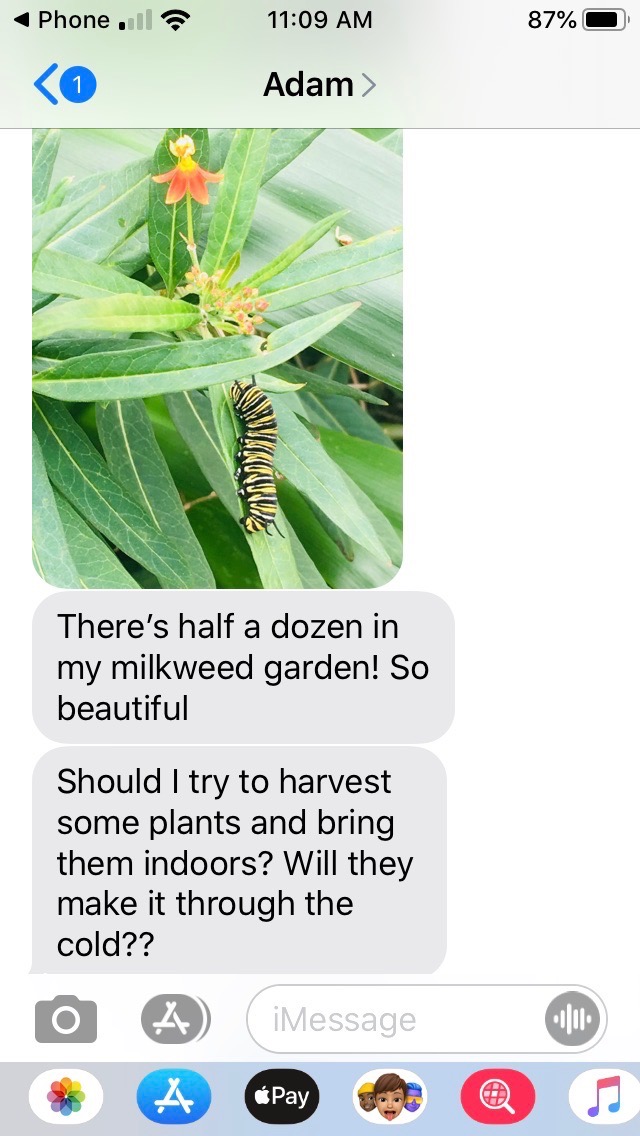 The Darwinian logic makes sense. That said, if you just can’t help yourself, keep in mind that having live butterflies inside your home carries responsibility. Ideally, you would have them in a place that mimics natural light cycles–no harsh fluorescent lights. Keeping them safe in a pop-up cage so they don’t fly under the couch or get stepped on is another concern. And, you’ll need to feed them after the first 24 hours or so.

Hodsdon has raised tens of thousands of butterflies and has moody weather in Tampa Bay similar to ours in South Texas.  Since butterflies taste with their feet, she pointed out, you have to set them on the sponge so they can “taste” the fake nectar, whetting their appetite. At that point, they will extend their long proboscis and slurp some fuel to power their flight.

If the butterflies resist the sponge or scrubber, Hodson suggested taking a Q-tip, dipping it in the Gatorade and gently touching the creatures’ proboscis so they get the hang of it.

When the weather changes, you can release them to wind.