Favorable weather delivered an enchanting outing at the Piedra Herrada monarch butterfly sanctuary in the state of Mexico this week. The butterfly abundance seemed to sync with predictions by Monarch Watch founder Chip Taylor that the 2019 season will be a good one for the migrating insects–the second best year since 2008.

Monarch butterflies streamed down the highway around 11 AM Monday as our small group of travelers approached the entrance to the preserve in Temascaltepec, a 40-minute drive from Valle del Bravo where we stayed with friends.

The two-lane road assumed the appearance of a monarch butterfly rush hour–as if the insects were heading somewhere fast, and with a purpose.

In a sense, they were.

As temperatures climbed to 77 degrees on the mountain around noon, the butterflies had a window of only several hours to leave the Oyamel firs and pine trees where they roost each evening. In warm weather, the insects move downhill from elevations of 10,000+ feet in search of nectar or water. Having occupied these forests since November, the butterflies’ fat stores are dwindling. They’re motivated to fuel up before returning to their roosts before sunset when temperatures drop below their 60-degree threshold for flying.

“It’s so impressive how the cars and even semi trucks slow down as a show of respect for the butterflies,” said Fletcher Pool, a former minister and now a potter from San Antonio, Texas, who was visiting the roosting sites for the first time. Traffic slowed to 15 kilometers per hour on the stretch of road near the roosting site entrance–about 9 miles per hour–even for commercial trucks hauling goods.

For Ashley Bird, manager of San Antonio’s Monarch Butterfly and Pollinator Festival, the trip was taken to provide context for understanding the iconic insects’ broad appeal. “Now I really get the magic,” said Bird, also a first-time visitor to the roosting sites. “I’ve always appreciated the butterflies’ metamorphsis, but seeing the monarchs in their ‘home’ opened my eyes to the complexity and majesty of the migration,” she said. 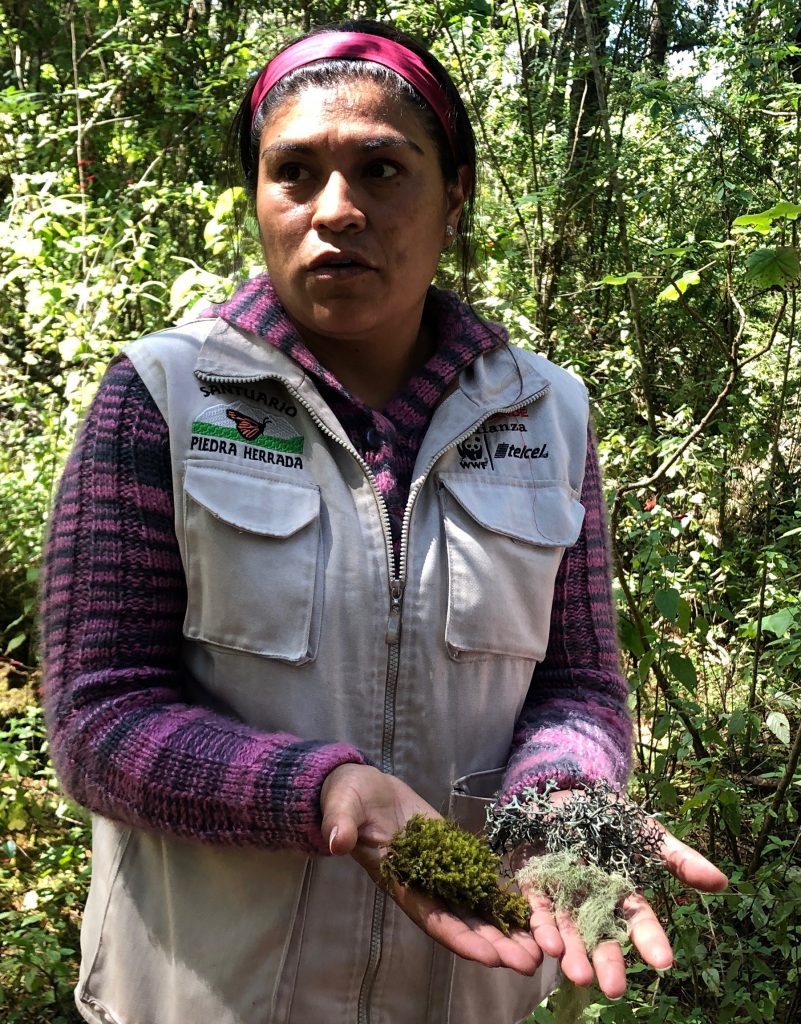 Sonia Escobar describes the difference between mosslike plants that grow on Oyamel firs vs. pine trees at the Piedra Herrada sanctuary in the state of Mexico. Photo by Monika Maeckle

Another white blossom resembling a boneset or mistflower also invited the butterflies, as hummingbirds moved through the forest chirping and diving for their share of nectar.

Thousands of monarchs also gathered at puddling zones that graced the trail–damp muddy spots where they could slurp moisture and nutrients from the wet earth. See video below.

Visitors from Mexico, Australia, New Zealand and the U.S. listened as Escobar explained the differences in pines and Oyamel trees.

“The Oyamels retain more moisture,” she explained, demonstrating the fact by breaking open a seed from the giant fir

and releasing a fragrant, oily resin. A similar exercise on a pine seed resulted in no such oil. 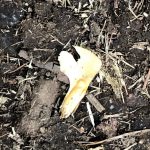 “When you cut them down, they actually release water,” she said.

Escobar made her point again later in the hike by showing mosslike plants that grow on pine trees versus Oyamels. The latter exhibit a long root tail, because they get more moisture. “And yet they’re grey, rather than green,” she said, pointing out a common trait of drought tolerant plants.

The 2019 season monarch butterfly counts are expected in the next few weeks and predictions suggest a strong year.