Located on the city’s far north side, Tuscan Oaks became number 534 of the Alamo City’s pollinator habitat initiative–the first, and to date, only–registration by a homeowners’ association.

Why is this news?

Homeowners associations have a history of resisting any departure from traditional green lawns and automated sprinkler systems. Almost every guide to native plant landscaping includes tips for overcoming homeowners’ association’s objections to landscapes that increase biodiversity, save water and reduce pesticide use and storm water run-off.

In his most recent book, Nature’s Best Hope, New York Times best-selling author and native plant advocate Doug Tallamy called HOAs one of the biggest stumbling blocks to deviating from the status quo of turf grass as front yard treatment.

For example, in early 2019, Don Kirchhoff received a letter from the Forest at Stone Oak HOA asking him to mow the “weeds” in his front yard. It cited him and his wife, Joyce Peterson, with a breach of the HOA’s declaration of covenants, conditions, and restrictions, the legal guidelines that govern most communities with HOAs.

The violating “grass, weeds and vegetation” were in fact, bluebonnets that were setting blooms.

The couple was accused of violating a regulation stating that “grass, weeds, and vegetation on each Lot shall be kept mowed at regular intervals.”

Kirchoff’s yard indeed was home to 6-inch-tall greenery: an expanse of bluebonnets, the state flower of Texas. 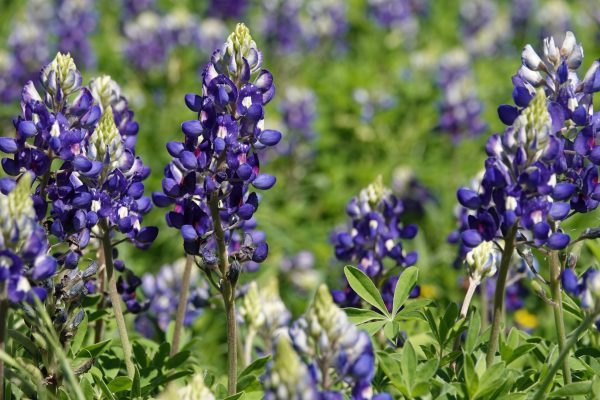 Bluebonnets, the state flower of Texas: to the Forest at Stone Oak HOA a “weed” that needs to be mowed. Photo courtesy Don Kirchoff

Kirchoff, the founder and immediate past president of the San Antonio chapter of the Native Prairies Association of Texas, requested educational materials from the San Antonio River Authority he could share with his HOA’s leadership and First Service Residential, the property manager.

He drafted a letter, and mentioned that he had applied for WaterSaver coupons, a popular program run by SAWS, San Antonio’s city-owned water utility.

Neighbors stopped by the Kirchoffs’ bluebonnet patch with their children to pose for photos and request seeds, and eventually, the HOA backed off. So far this year, the couple has received no citations from the HOA.

“I think we educated them a bit,” said Kirchoff.

Homeowner Jean Hackett, a master naturalist, hired the Nectar Bar, a local landscaping firm that specializes in native plant installations, to develop a landscaping plan for her Northside home in the Estates of Alon. They began landscaping chores.

Hackett acknowledges she was unaware of the HOA requirement to submit a plan for approval by the HOA before beginning work on her yard. As a result, the first of three notices from her HOA’s manager, Diamond Association Management, appeared in her mailbox in January. It asked her to cease all landscaping until a plan was approved.

She said she submitted her plan, and the HOA responded with another letter stating that native plants and ground cover that were not contained in a “defined bed” could not be approved since it was “not in harmony with the surrounding areas.”

The Nectar Bar and Hackett revised the plan to include a 6-inch brick border for the natives. Before it was finally approved, the HOA sent a third letter to Hackett in February, urging her to “please treat and remove weeds from your yard within the next 10 days.” Again, the “weeds” in question were the state flower of Texas.

“It’s frustrating to get one set of suggestions from the City and the parks, and then have the neighborhood association tell you that you need to have native plants separated by borders,” said Hackett. 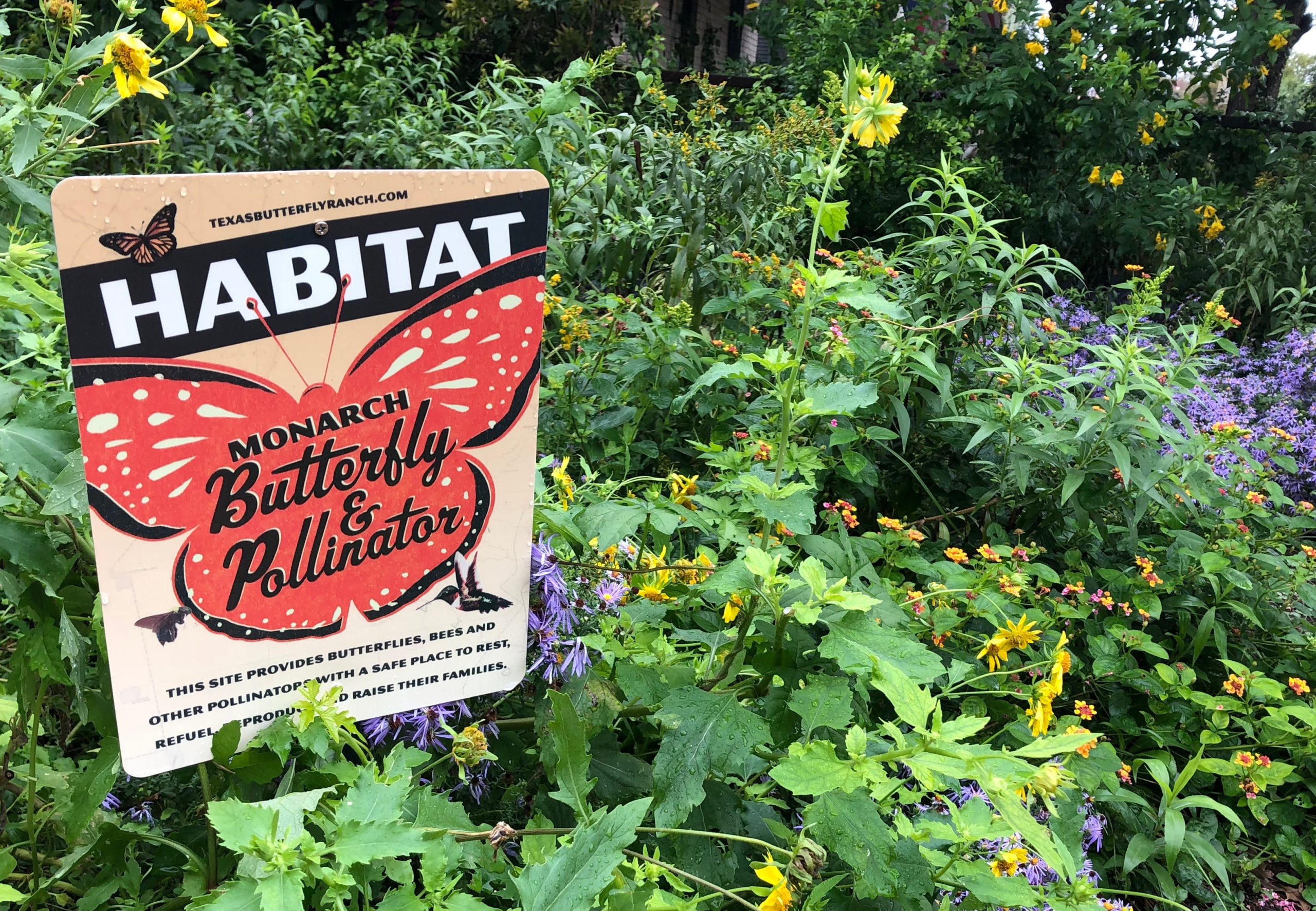 Anne Lawrence, a resident of Lookout Creek Canyon on San Antonio’s North Side, recently made her second attempt to remove turf grass from her front yard after receiving an unusually high water bill last summer. Her first landscaping plan was rejected by the Lookout Creek Canyon HOA, she said, because of her use of mulch, which captures and retains water, reducing the need to irrigate.

“I am 80 years old this year, handicapped and can’t mow,” Lawrence wrote in a March 9 response to HOA manager Leslie Ciogna. “Nor can I afford a mowing service as I live on Social Security. … I strongly urge you to reconsider your land use policies, given the environmental crisis we are in and the Texas state laws concerning xeriscaping.”

Such HOA-vs.-homeowner landscaping conflicts persist despite the passage of a Texas “xeriscaping law” in 2013. Senate Bill 198 passed unanimously and assures that Texans living under HOAs can install drought-resistant landscaping or water-conserving turf. The HOAs can still require homeowners to submit plans for approval, however.

The Communities Association Institute (CAI), an international membership organization for homeowners and condominium associations, estimates that 25 percent to 27 percent of the U.S. population live in neighborhoods with a community association. More than 365 homeowners associations are registered with the City of San Antonio.

Overcoming HOA objections is no small task, but education and patience are key, according to Karen Guz, director of conservation at SAWS.

“We have had some good results working proactively with HOAs,” said Guz. “We get from them that they want reassurance that people will have reasonable landscape design and good maintenance.”

Much of the challenge comes from people having difficulty conceiving what a “maintained” native landscape looks like, she explained. It’s easier to understand a freshly mowed lawn.

“The good news is that it can be done,” said Guz. “Once they get feeling comfortable with the idea of upkeep, they accept alternative landscapes more readily.”

The Tuscan Oaks Homeowners Association serves as case in point. Its registration with San Antonio’s Monarch Butterfly and Pollinator Habitat Challenge shows at least a partial embrace of native plantings.

In February, Tuscan Oaks resident Byron Augustin lobbied his HOA board to allow the creation of a 40-acre private park with walking trail called the Tuscan Oaks Monarch Butterfly Migration Sanctuary. He received permission to move forward with the project.

“It really wasn’t that tough,” said Augustin, a retired professor of geography at Texas State University in San Marcos. He hopes to add 400 Antelope horn milkweeds, a Texas native host for monarch butterfly eggs, to add to the sanctuary that surrounds the neighborhood. 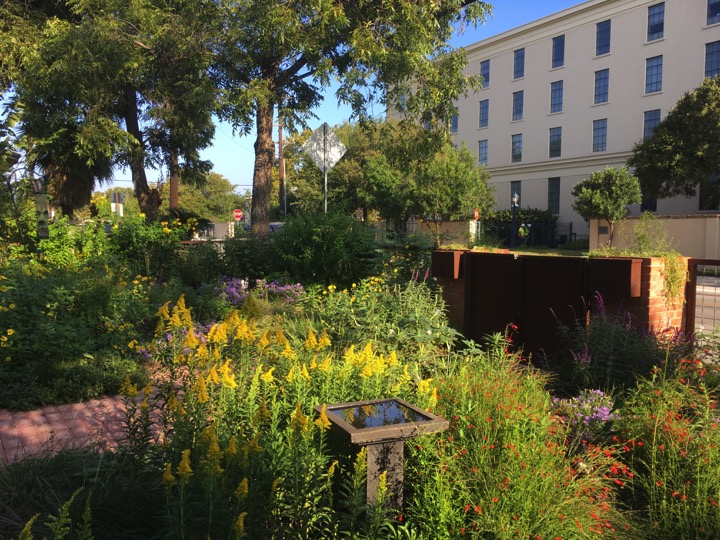 Meanwhile, Augustin must still comply with the HOA’s landscaping requirement in his front yard. The HOA maintains all front yards for residents, mowing regularly and fertilizing twice a year, said Tuscan Oaks board member Tom Kelly.

Homeowners foot the water bill for the automatic sprinklers.