Both butterflies were tagged at the Texas Butterfly Ranch on the Llano River by Aleisha Fitz and Alexander Rivard on October 3 and 4. Both were recovered in the Mexican mountains in the El Rosario sanctuary, one of 14 overwintering colonies that comprise the Monarch Butterfly Biosphere Preserve. The preserve covers more than 138,000 acres of high altitude oyamel fir forests in central Mexico where mega millions of monarch butterflies overwinter.

Monarch Watch said the butterflies were two out of 672 recovered and approximately 100,000 tagged this season.

In addition to the usual tagging data required by Monarch Watch as part of the citizen science data gathering program–date, place, sex of butterfly–this year each butterfly tagged as part of our Festival carried the name of a loved one lost.

Each fall, thousands of monarch butterflies are tagged as part of a citizen science initiative organized by Monarch Watch. Photo by Monika Maeckle

ACLN280, a male, carried the names of Barbara Brockman and Michael Sullivan of New Braunfels, Texas.

Andrea Brockman, Barbara’s daughter and Sullivan’s cousin, submitted her relatives’ names to the Festival’s Honor a Lost Loved One campaign in mid October.

“It just seemed like the right thing to do, with everything that was going on,” said Brockman this week.

Upon hearing that the butterfly tagged in her mom and cousin’s names was recovered, Brockman said “It just gives me goose bumps.”

“That butterfly had two of the sweetest spirits getting down to where it was going—it had all the help it needed,” she said.

A retired DPS trooper, Brockman said her mother died one day shy of her 90th birthday on January 14th, 2020. Michael Sullivan died on August 14, 2020, at age 77 after a long bout with cancer.

She submitted both names after reading an article in the San Antonio Express News that described the tagging initiative, a first in the Festival’s five years. 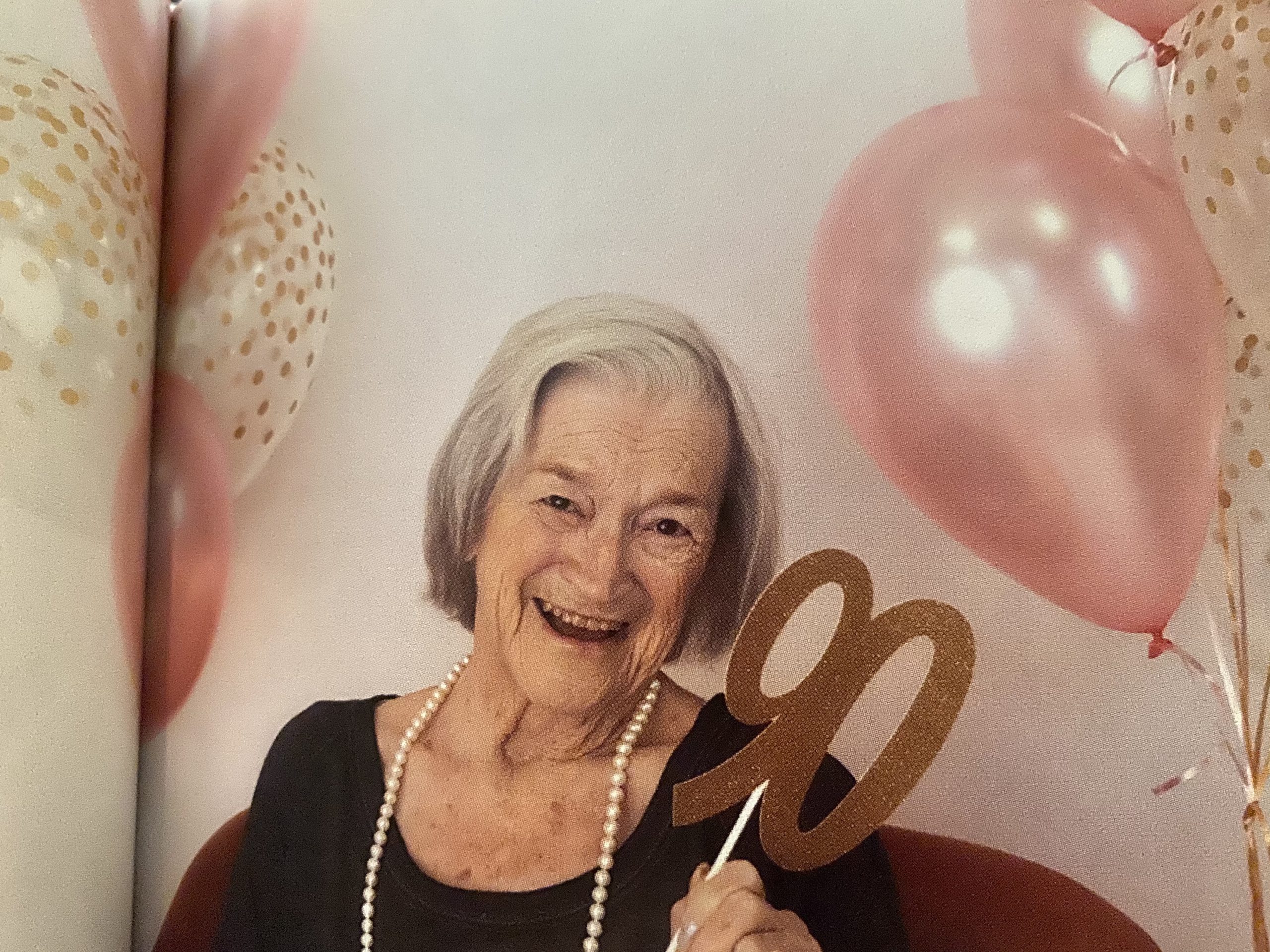 Our Festival’s Honor a Lost Loved One initiative was born during the peak of the COVID-19 pandemic. (NOTE: the program was renamed Forever Journey: a Celebration of our Loved Ones in 2021.) As thousands perished and those in mourning had few places to turn for comfort, we added the chance to tag a monarch butterfly in honor of someone who died to our data sheets, as a gesture of hope and healing. Typically, the monarchs’ return to Mexico each year in time for Day of the Dead in the first days of November.  Indigenous peoples have associated their arrival with their ancestors returning home for an annual visit.

ACLN311, also a male, was tagged in honor of renown journalist and an old family friend and colleague, Christopher Dickey. The author, editor, war correspondent, and pundit died suddenly on July 16, 2020, of a heart attack at the age of 68. My husband Robert Rivard and I came to know Chris in Central America as journalists covering the regional strife in the early 1980s.

In a New York Times obituary of Dickey, television news anchor Brian Williams called him “one of those great and curious storytellers who seemed to know just about everything and everyone.” Dickey authored seven books, including a much lauded memoir that described his difficult childhood as the son of poet laureate and best selling author James Dickey.

Upon hearing that the monarch butterfly tagged in her husband’s name had been recovered in Mexico, Carol S. Dickey said she was moved to tears.

“Chris would have been so pleased that you remembered him in this way. And even better to know that ACLN311 made it to Mexico!” Dickey said via email. 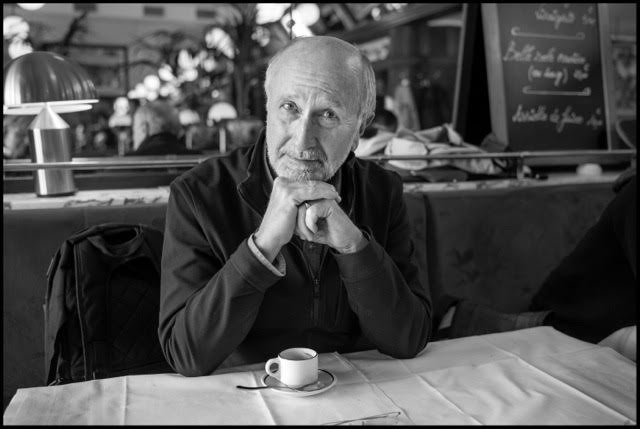 A butterfly tagged in honor of Christopher Dickey, ACLN311, was reported recovered in Mexico this week. Here, Dickey sports one of his favorite “work jackets” at a cafe in Paris. Photo by Peter Turnley, courtesy Carol Dickey

Both of the butterflies were tagged along the Llano River near London, Texas, in a grove of pecan trees known for decades as a butterfly roost.

Aleisha Fitz, an artist in Austin and our son Alexander Rivard, a San Antonio school teacher and Espada Coffee proprietor, accompanied me on an early October tagging outing that weekend. We didn’t expect much, but the butterflies showed up in huge numbers.

Temperatures climbed into the mid-80s with winds out of the south, keeping the butterflies in place. The butterflies clustered in the pecan trees in the early morning and evening, and searched for nectar during the day. It was Fitz’s first time to tag monarchs. 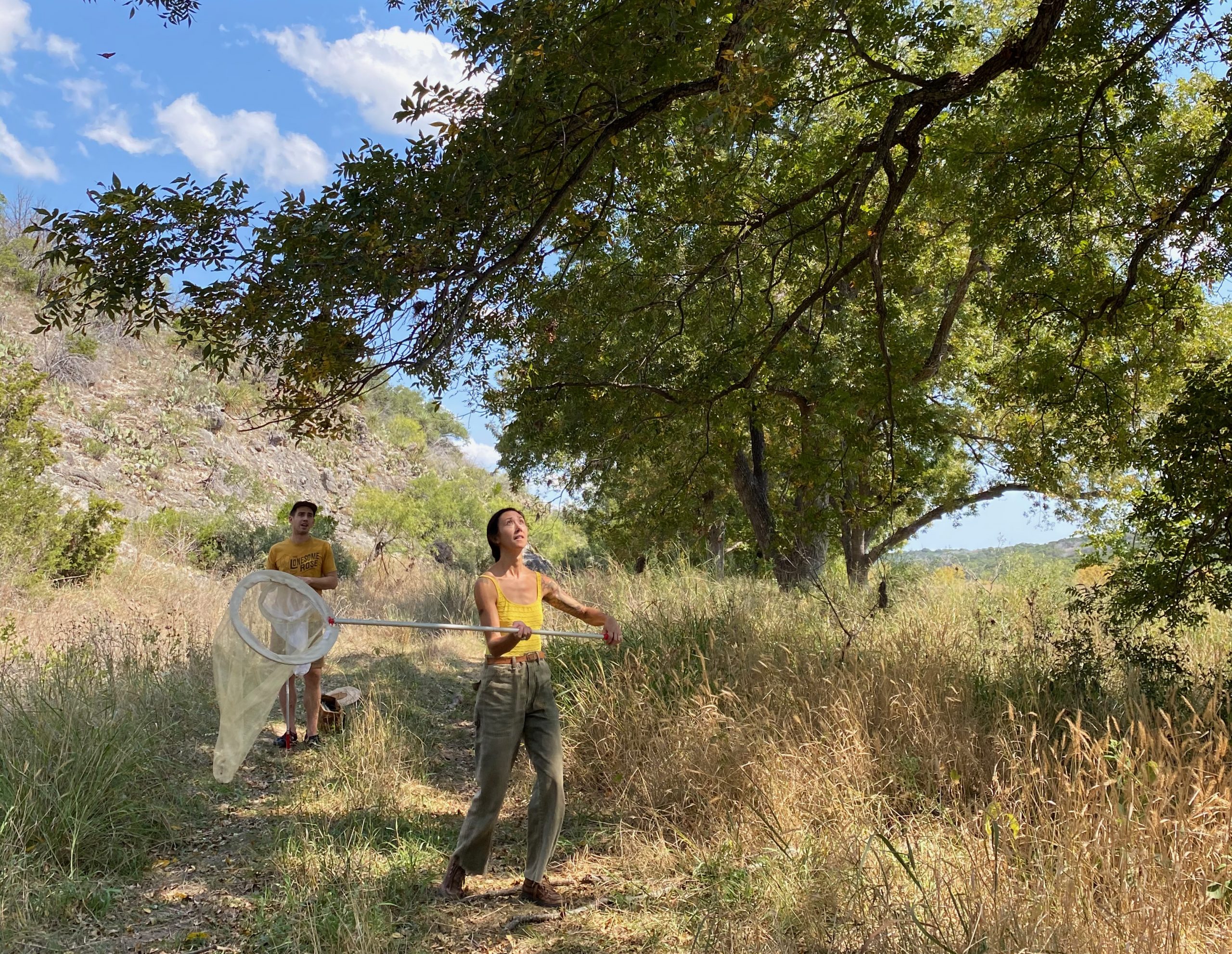 “It felt very dream-like to be in the presence of so many butterflies,” she said, recalling the weekend. “It was thrilling to interact with them on their journey, and even more so now, knowing that they completed it.”

Rivard, who has joined me on many butterfly tagging escapades, had been down this path before. Even so, he described this particular outing  as”pretty special.”

Chip Taylor, founder of Monarch Watch, said the number of butterflies recovered each year vary with winter mortality and many other factors, but have ranged from a few hundred to more than 3,000.

Of those, 672 were recovered in Mexico–and two of those, or .002% were tagged by our Festival cohorts on the Llano River. See the full list of recoveries here.

Carol Dickey expressed hope and amazement at the odds of her husband completing his most recent flight.

“That combination of letters and numbers will hold magic for me now,” she said. “Navigating in the darkness of grief, one is constantly looking for signs to help light the way out. I can’t help thinking ACLN311’s successful journey  is a sign from Christopher. And for today it will be my light.”

Alexander Rivard holds a net full of butterflies on October 3, 2020. No way to know if ACLN280 and ACLN311 are contained therein. Video by Monika Maeckle

We will continue our Forever Journey program. Stay tuned for updates.

San Antonio’s sixth annual Monarch Butterfly and Pollinator Festival will take place throughout the month of October this year with workshops, outdoor learning, events and monarch tagging and celebrations, consummating at Confluence Park on October 16, 10 AM – 2 PM.

If you’d like to financially support this year’s Festival Forever Journey initiative to tag butterflies in Honor of Loved Ones, you can do so here.