The monarch butterfly migration of 2021 has begun, and based on reports from Canada and sightings of the iconic insects in San Antonio and the Texas Hill Country, the insects are running strong.

“Two of us spent about one hour in the late morning and one hour in the afternoon capturing monarchs,” reported longtime monarch butterfly tagger Donald Davis from Port Hope, Ontario, on August 20. Davis said he and a friend tagged 164 butterflies at a clover field near Lake Ontario. “Almost all monarchs captured were in pristine condition,” he shared via the DPLEX list, a monarch enthusiast email group with hundreds of members.

Citizen science organization Journey North, which tracks the monarch migration and others, reported sightings of a handful of roosts as of this writing.

“First monarchs that I’ve observed in an annual roosting location near Tobermory, Ontario, Canada,” an observer identified as Peter noted on August 20. He added that the roost of about 200 had island hopped across Lake Huron and were “resting/fueling up for the next leg of the journey.”

The next leg of that journey will bring the international travelers through San Antonio and what’s known as the Texas Funnel in September and October. Peak monarch migration occurs at our latitude October 10 – 22–just in time for San Antonio’s sixth annual Monarch Butterfly and Pollinator Festival, which takes place this year October 16 at Confluence Park.

During the migration, monarchs typically nectar on flowers in the morning, fly during the day, then drop from the sky in the evening to roost overnight in groups. Check out Journey North’s live migration maps here.

Dozens of monarch butterflies have been spotted along the San Antonio River in downtown San Antonio in recent weeks.  Numerous accounts of monarch eggs, caterpillars, adults– even native milkweeds–have been reported, unusual for this time of year. Typically such sightings occur in these parts around Labor Day, and are known as the “premigration migration.” 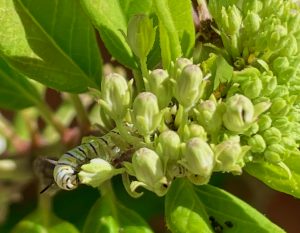 “I’ve had Monarchs scouting the milkweed for the last three weeks,” said Drake White, owner of the San Antonio native landscaping firm The Nectar Bar. “I’ve noticed changes in many of the butterflies this year, and in several butterflies showing their Fall form in July! I think we’re in for an early winter,” she said.

So what’s the forecast for this year’s migration?

Chip Taylor, founder of citizen scientist organization Monarch Watch, which celebrates 30 years of studying, tracking and tagging monarch butterflies this fall, wrote recently that conditions appear “favorable for a large migratory population that could rival that of 2018” for monarchs east of the Rocky Mountains. That year, the monarch population jumped to a healthy 6.05 hectares/15 acres at the overwintering sites in Mexico where numbers are counted annually.

Taylor expressed concerns about monarch numbers from the eastern Dakotas and western Minnesota since those areas “have been much warmer and drier than is generally ideal for monarch population development.” He laid out his forecast in an  August 17 post on the organization’s blog.

He added that perhaps due to adequate rainfall and moderate summer temperatures, monarchs are much more abundant in Oklahoma and Texas right now, and suggested that large numbers of monarchs could join the migration from those states in late September and October.

“The September temperatures are still a question,” he wrote, “but there is no evidence of a drought in Texas or elsewhere that might diminish the possibility of surviving the passage to the overwintering sites.” 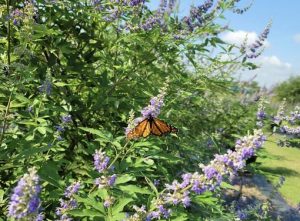 “There is every reason to expect a larger overwintering population in Mexico this year than seen during the last two winters,” he concluded.

That is not the case for the western monarch population, which has suffered severely this year.

“In the West, the prospects for an overwintering population of more than a few hundred monarchs along the California coast appear to be slim at best,” wrote Taylor, citing extreme temperatures, drought and wildfires.

Karen Oberhauser, director of UW-Madison Arboretum and founder and director of the Monarch Larva Monitoring Project, agreed with Taylor’s upbeat assessment of the eastern migration.

“Based on egg and larva data collected by MLMP volunteers and sightings by butterfly monitors, my guess is that things will be better than last year,” she said via email. “But a lot can happen between now and then,” she added, referring to the myriad variables that factor into the migration’s success: wildfires, hurricanes, cold snaps, heat waves, and human interference such as aerial pesticide spraying.

Andy Davis, migration studies expert at the Odum School of Ecology at the University of Georgia, declined to comment.

Thousands of citizen scientists tag monarchs each fall. They capture migrating butterflies in nets, adhere a tiny sticker to the discal cell of their forewing, record the butterfly’s sex, the date, time and place of the tagging, and report the data to Monarch Watch.  At this year’s Monarch Butterfly and Pollinator Festival in San Antonio, organizers will continue a tradition begun last year in response to COVID deaths known as the Forever Journey campaign. The initiative tags each butterfly in honor of someone who died.

FOREVER JOURNEY: Want to honor someone who died? Fill out the form at the link above and we’ll take a butterfly in their name. It’s FREE.

Here in the Texas Funnel, mild summer temps and regular rain following the historic freeze in February that knocked out many nonnative plants has resulted in an unusually robust early monarch season. 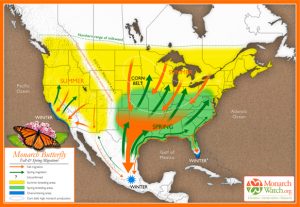 “It’s definitely a crazy year,” said Jennie Singleton, longtime monarch tagger and docent for the city of Grapevine’s Butterfly Flutterby Festival. “Normally I get caterpillars in mid September ahead of the big migration. This year there have been caterpillars since the first of August.”

Singleton said since returning from a summer road trip on August 13, she’s found caterpillars every day.

In Comfort, just outside San Antonio, Cathy Downs, an outreach specialist for Monarch Watch, reported no sightings of monarchs or larvae since late July. “My Asclepias asperula milkweed has senesced here,” said Downs, referring to Antelope horns milkweed that typically blooms in the spinrg. “I had some larva on Asclepias texana in late July. I was hoping for a 2nd emergence as I missed my harvest. Fifth generation [monarchs] is getting to be a regular thing in Texas for several years now.”