The browsing mammals, on loan by contract from Rent-a-Ruminant, a goats-for-hire business in northeast Texas, will tackle poison ivy, poison oak, ragweed, Chinaberry, glossy privet berries, and other uninvited vegetation at the 343-acre park.

“They’re nibbling faster than first thought,” said Lynn Bobbitt, director of development/special events for  the Brackenridge Park Conservancy (BCP), which raised almost $18,000 to fund the project. The goats had to be transported from Brownwood, Texas to San Antonio, and the fee includes a goat wrangler. The Park also had to install a low-volt electric fence to keep the goats in check as they are rotated through various areas.

The idea was inspired by the Houston Arboretum, which is in its third year of contracting the goats to control flora around their ponds and savanna. Since the San Antonio River runs through the park, all land management must be sensitive to riparian interests. 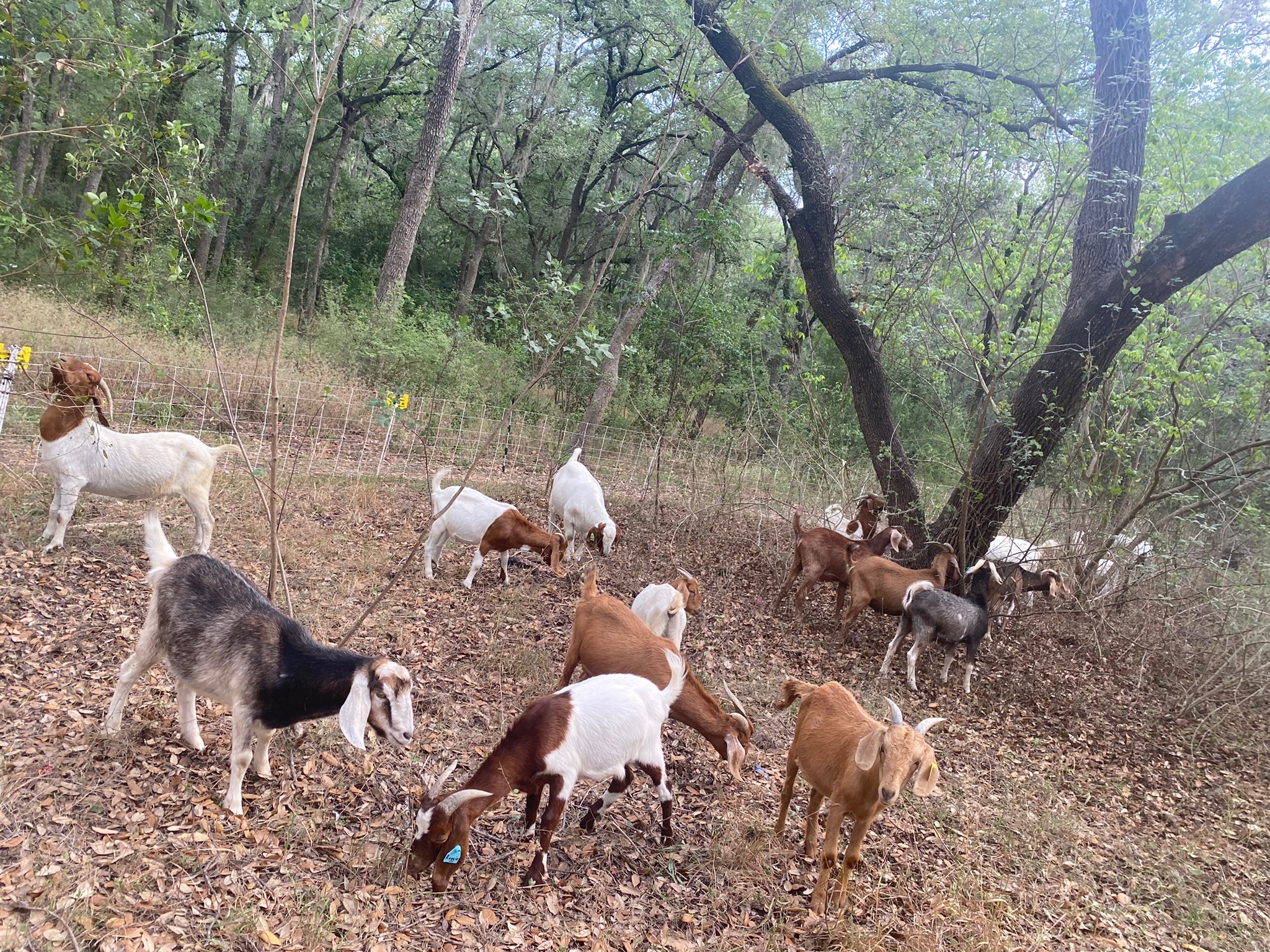 “If this project is successful, it could be considered for other City parks,” Turner said.

Goatscaping is not new. The idea of using goats and other grazing animals as land management workers has been around for centuries. According to the University of Minnesota extension office, the White House utilized sheep to maintain its massive lawn during World War 1 because the U.S. was reserving manpower for war efforts.

The benefits of goatscaping are multiple. No chemicals, no carbon emissions, free fertilizer and the ability to eradicate invasive and other unwanted species in places that might be otherwise inaccessible–steep hills or ornery prickly pear patches, for example.

Native plant enthusiasts might be concerned that the goats will eat desirable native plants in the Park, hindering their growth and resulting in no forbs left behind.

They need not worry.

“It’s not necessarily a negative thing that they’ll be grazing [on the native plants] in there, especially if they move them through quickly,” he said, adding “We’re missing a lot of grazers in the ecosystem.”

Pierson said SARA has talked about the possibility of utilizing goats for land management, but discussions haven’t gotten very far.

A five-year study published in the Journal of Restoration Ecology last year found that prescribed grazing by goats significantly reduced the cover and height of invasive shrubs, with “mostly neutral or positive effects” on the herbaceous layer, and a “not significant” impact on native tree species.

“Our results suggest that prescribed grazing by goats provides an effective and environmentally friendly treatment for heavy invasions of non-native shrubs,” wrote the researchers in the abstract.

In addition to the ecosystem benefits, the goats provide a welcome distraction for visitors in a safe, outdoor setting. Many of the goats were rescued or adopted and each carries a name tag prominently clipped to their ear. Olive, Big Mama, and Blakely delighted visitors on a recent visit with their climbing antics and voracious chewing.

The goats will work at the park until the end of May.