Today marks the Fall Equinox.   Precisely at 3:44 PM Central Standard Time, the sun  crossed the equator, marking the shortening of days after a day and night of equal measure.  Equinox is Latin for “equal nights.”

Tagging season is here, as is the first day of Fall. Monarchs are not far behind. Photo by Monika Maeckle

As Fall arrives, it signals Monarch butterflies east of the Rocky Mountains to hightail it to Mexico.  The dramatic orange and black butterflies get their cues from the sun and the shorter days prod them south on their 3,000-mile trek to Michoacán where they roost in ancient Oyamel trees for the winter.
Many of us believe that 2014 will be even worse than last year’s “worst in history numbers-wise” for the storied creatures, thus we await their arrival in the “Texas Funnel” with great anticipation.   All migrating Monarchs must pass through Texas to get to Mexico.  We’re so lucky to live in the heart of the Texas flyway where our Texas Hill Country streams and rivers provide ample nectar with late season Frostweed, Goldenrod and Water Hemlock to fuel the late stages of their long journey.

We chronicled our FOS (First of season) sighting of migrating Monarch butterflies in a post on August 11.   Many comments followed from fellow butterfly followers (mariposistas, as I like to call them), dismayed by an apparent shortage of butterflies this year.
“I live in a rural area of southern Indiana and have not spotted any Monarchs,” commented Idana Crowe in the post referenced above.  “My butterfly weed is usually stripped but not one egg this year.”
Freda Holmes wrote from Kenora, Ontario, in central Canada: “I have had NO monarchs in my 400-500-plant patch of milkweed. I have monitored many sites in the 200 km stretch of rural highway between here and Winnipeg. Nothing.”

Ken Williams echoed the lack of Monarchs.  “We had a single Monarch, which had part of on wing missing, visiting the milkweed in our garden last week….We have Queens every day on the milkweed and mist flower, but not nearly as many as last year, when it was common to have a dozen or more each day.”

And one reader self-identified only by her first name, Suzanne, of Chester County, Pennsylvania chimed in:  “We’ve seen only one Monarch butterfly this year. So sad.”

More recent reports confirm the dreary trend witnessed here in San Antonio and on the Llano River.  Not much flying.  Not one Monarch tagged to date. Last year, it was only slightly better.  Hope it changes. 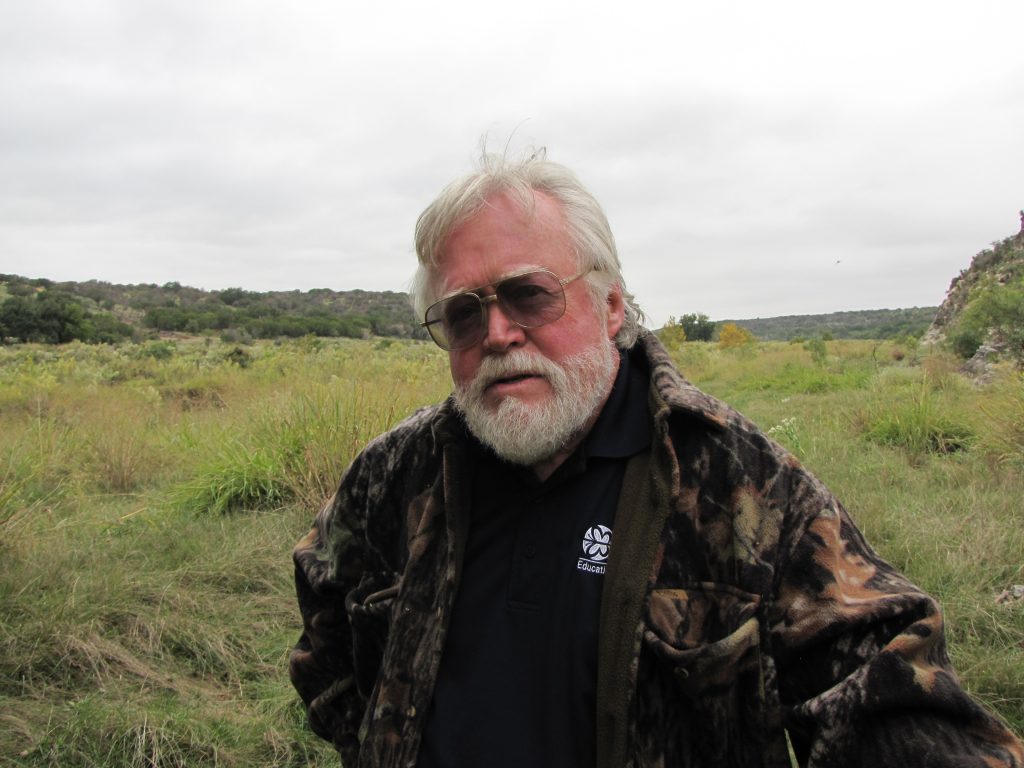 Monarch Watch founder Dr. Chip Taylor on the Llano River in the Texas Hill Country in 2012.  Photo by Monika Maeckle

On an upbeat note, Dr. Chip Taylor, founder of Monarch WAtch posted a rallying email on the DPLEX list, an old-fashioned listserv of hundreds of academic and nonacademic butterfly enthusiasts.
“Given the low numbers cited for the population throughout the year from February through this month, our expectations were low,  wrote Dr. Taylor, describing an annual tagging event staged by the University of Kansas at Lawrence, home of the citizen scientist Monarch Watch program.  “As a consequence, we did not promote the event extensively.”
Taylor said the day didn’t start out well for butterflies with temperatures in the 40s.  Butterflies who won’t fly if it’s less than 60 degrees.  “…The early taggers had no choice but to look for Monarchs in trees. Unfortunately, there were few Monarchs in the usual places in the ‘tree island’ in the wetlands. Our only hope was that once monarchs warmed up they would move off from the overnight roosts onto the flowers.”
And they did.   Dr. Taylor shared that by 9 o’clock, Monarchs were moving onto flowers, making for easier netting and tagging.  “At the outset I was fearful that only 50 or so monarchs would be tagged and that there would be more zeros on data sheets than usual,”  he wrote.  “Instead, a total of 271 monarchs were tagged – about one for each person at the event.”
Not a bad day in the field for what is looking to be a dreadful year for Monarchs.
So who knows?  Maybe the Monarchs will surprise us and rebound.   Those who make this year’s trek, the progeny of last year’s small-but-hearty crop surely must be among the fittest.   Their select gene pool should build a strong population to renew the process in the spring.
But first, this Fall’s migration.   Let’s see what happens.