What a perfect weekend:  friends and family gathered to assist in my annual Monarch Birthday Tagging weekend.  Lucky me, my October 13 birthday falls smack dab in the middle of peak migration, predicted October 10 – 22 this year by Monarch Watch. 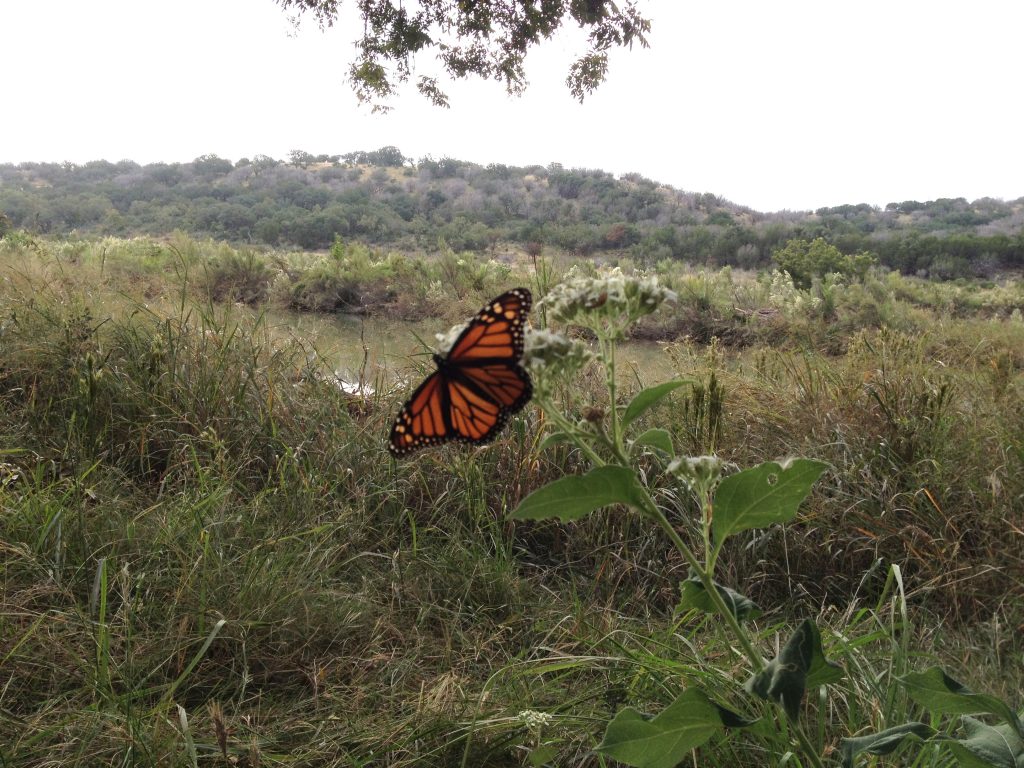 En route to the Llano, where Monarchs typically roost in the pecan trees that line our stretch of river, our San Antonio tagging team of Alex Rivard, Veronica Prida and Omar Rodriguez stopped at the Hilltop Cafe 12 miles outside Fredericksburg.   “Monarchs are all over the ranch,” said Johnny Nicholas, the piano playing proprietor.  We were stoked. 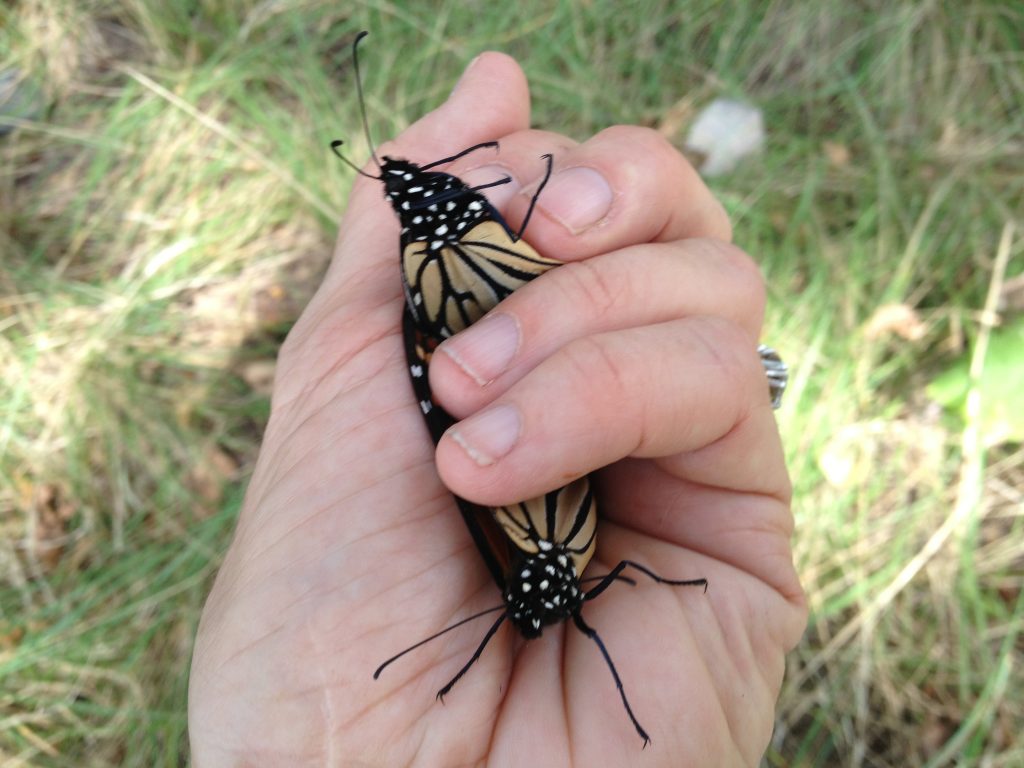 Handful of Monarch butterflies on the Llano River this weekend. Photo by Monika Maeckle

We arrived after dark, thus couldn’t check the usual roosting and resting spots along the riverbanks until Saturday morning.   On Saturday, Chris Gannon, David Braun and Karen Ford joined us from Austin.  The tag team was complete.

I scouted the scene around 8 AM, paddling my kayak to the “Monarch spot.” Monarch butterflies floated over the pecan branches near the river, a scene that suggested to me that all might possibly be right with the world. “YES!” I said aloud to no one.  “They’re here!” 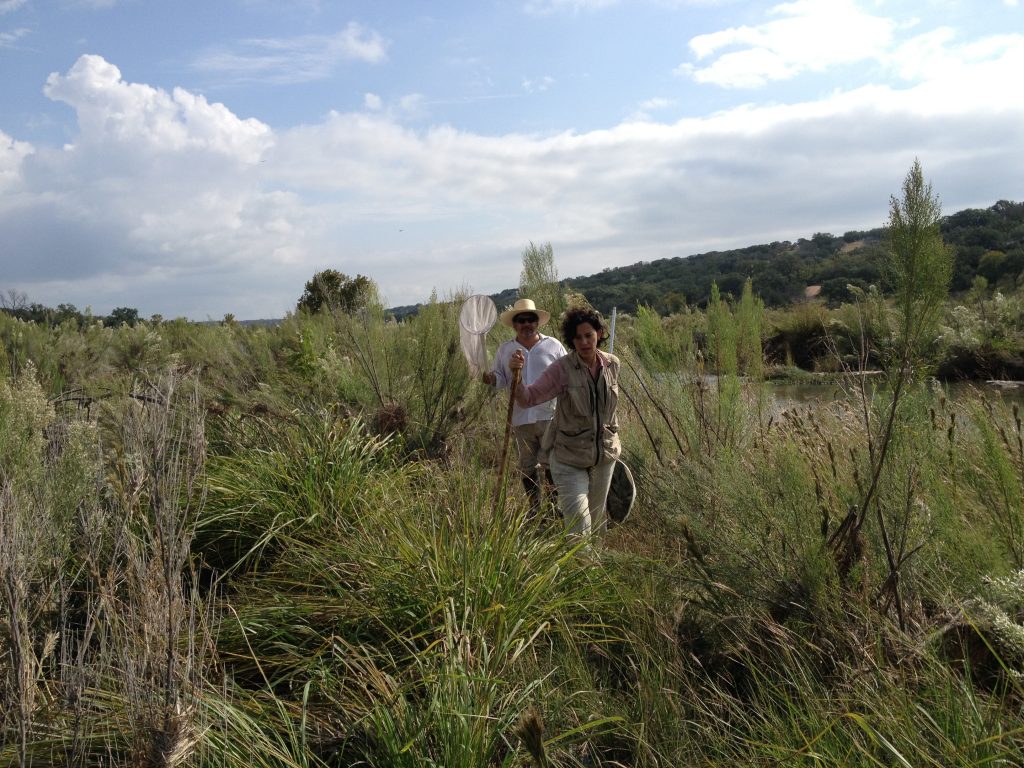 After the drumbeat of dreary predictions warning us that 2013 will be the worst year in history for Monarch butterflies, I had just about convinced myself that the days of a robust migration were over.   Seeing the creatures lilting in the breeze, floating above the persimmons and cedars, and lighting on pecan limbs gave me hope that perhaps they would be OK.
But the clusters were small compared to previous years.  The largest group we saw numbered only 20 – 25.  Most swoops of the net garnered only one Monarch at a time.   In the past we’d often capture several in one swing. 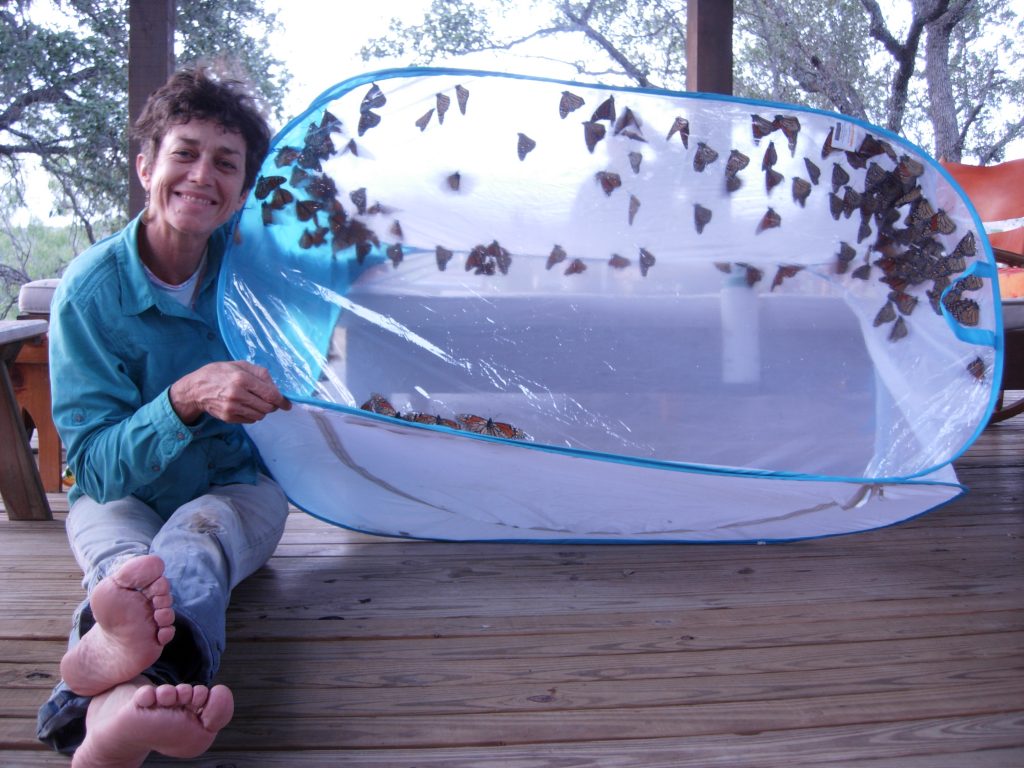 Typically we stage a Big Swoop Contest:  who could get the MOST Monarchs in their net in one swoop?  In 2008, my friend Clint Howell nabbed almost three dozen at once.  Here’s what I wrote five years ago–same week, same place, as last weekend.  That year, 2008, was a magnum opus year for Monarch butterflies in our part of the world:

“Our crew of Monarch maniacs competed to see who could snag the most in a single swing: Monika started with 15; David quickly surpassed that by netting 26; then Clint came along and outdid us both by nabbing 35 Monarchs in one swoop.”

So far this year, I take the prize with a mere six.

Chris Gannon and Tucker the Mellow Dog give it their best swoop, chasing Monarch butterflies on the Llano River. Photo by Monika Maeckle

The Monarchs seemed tentative on Saturday, as if waiting for the wind to carry them home.  Thunderstorms had been predicted for the entire weekend, but Saturday rose sunny and calm.
They moved around the trees and we tagged more than 100 by dinnertime Saturday–again, in ones and twos.  Most appeared healthy and we recorded an equal number of males and females.   The butterflies seemed uninterested in the abundant nectar lining the riverbanks–Frostweed, Goldenrod, Water hemlock, Cowpen Daisies, Purple Aster and even a Cardinal flower or two.  But Monarchs stayed in the trees, as if resting for their long journey. 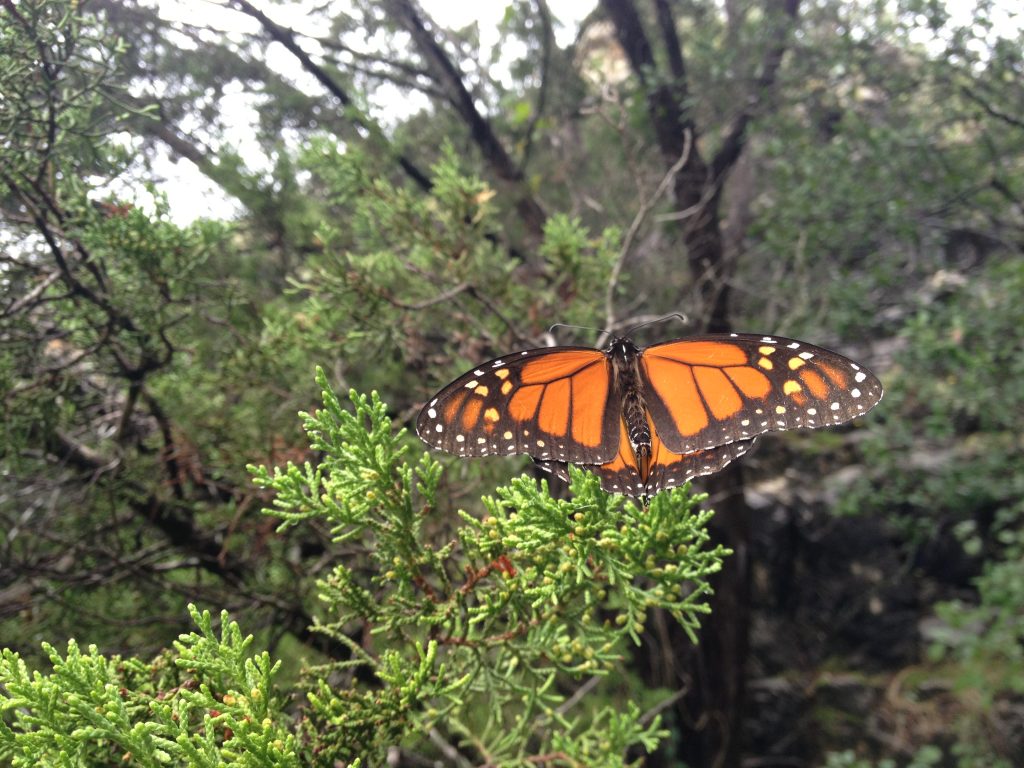 A common sight this weekend: Monarchs resting on Ashe Juniper, a.k.a. Cedar. Photo by Monika Maeckle

Saturday night a magnificent light show graced the sky about the river.  For more than an hour this year’s Monarch Tagging Team sat on the porch and enjoyed heat lightning as it backlit a cloud banket to the North.  Occasional bolts peeked through the clouds, showing itself as some sort of mammoth display of power and light.  The light show continued into early morning until the sky unleashed a thunderstorm that started at 6 AM and continued for 90 minutes, ebbing into a steady drizzle for most of the day with slight interruptions.   Three inches of rain resulted and the Llano River rose half a foot. 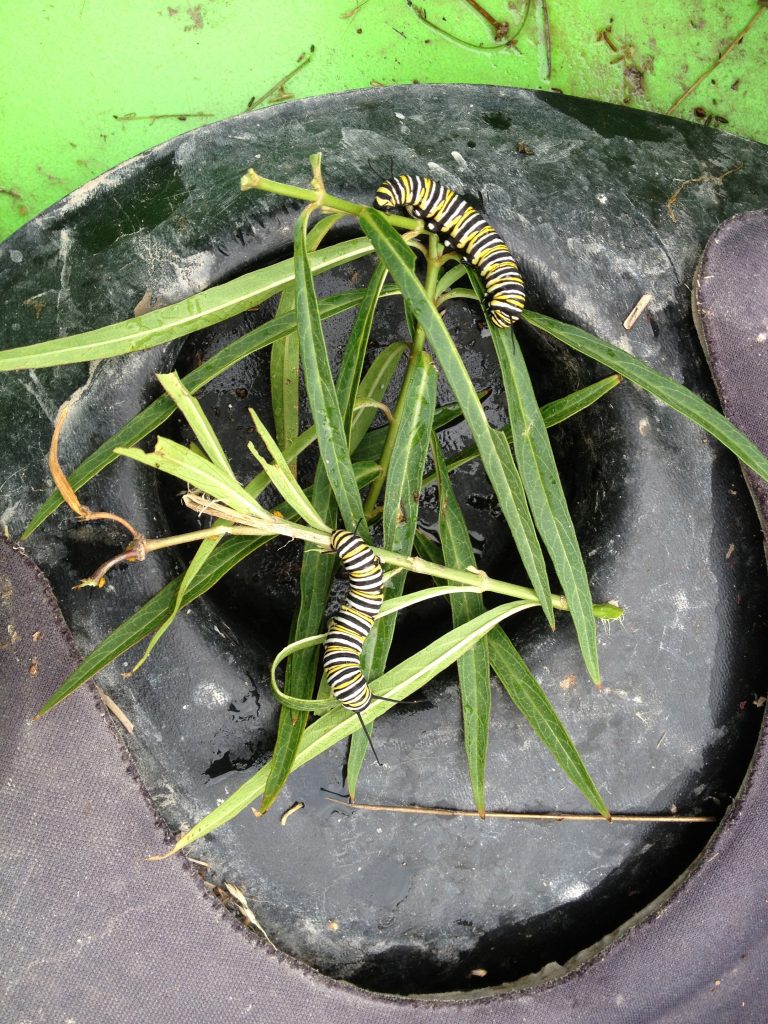 Not so many caterpillars as last weekend, but plenty of Monarch butterflies. Photo by Monika Maeckle

Monarchs waited out the storm along the Llano River banks.  We returned around noon and tagged a few more, ending the day with a total of 124.
Was this it?  The big mass of Monarchs for 2013?
Jenny Singleton in Menard reported similar results with no huge roosts.  She and her gang tagged 310 over the weekend, chasing them at three different ranches including her place on the Sabinal River where she usually tags 1,000-plus.
“I think the butterflies this weekend are the early pulses,” she wrote as we exchanged text message reports.  “They’re running really late this year.”
Dr. Chip Taylor, founder of Monarch Watch, agreed in a phone call.   “Monarchs are having their worst year.  And they’re running really late.   I think these are the early pulses.” I hope they are right.   We will see in the coming weeks.