2014 Monarch Butterfly Migration: Worst in History or a Hopeful Rebound?

Moth week is behind us and next up on the pollinator calendar is the Monarch butterfly migration. The storied insects start moving south on their 3,000-mile fall migration from Canada to Mexico around August 15th.
This year started with only 33 million Monarchs leaving the Oyamel forests of Michoacán in March–that’s the lowest count in history, down from more than one billion in 1994. It’s no surprise that Monarch watchers are on the edge of their seats, wondering if the majestic orange-and-black butterflies will rebound.

I saw my first-of-season (FOS) Monarch since the spring migration on Sunday, July 20, enroute to help our son Alex Rivard move into his first home. As I  crossed the driveway to my car, I noticed a Monarch butterfly on Tropical milkweed, Asclepias curassavica, in my front yard pollinator garden in downtown San Antonio.
There she was, tucking her abdomen to reach the underside of milkweed leaves, laying dozens of eggs in the process.  See the video above. I collected 34 eggs, took them inside for fostering, and left about that many on the plant.  Days later, little round “chew marks” on the garden’s milkweed plants proved that the eggs had hatched, but not a caterpillar was in sight.  Wasps, ants, spiders, ladybugs, a bird–who knows what got them?  Nature is brutal.
Still, I couldn’t help associate the FOS, egg-laying Monarch with the “new beginning” of our son’s arrival as a mortgage-paying, first-time homeowner. Alex will get a chrysalis as a housewarming gift.  And I am feeling hopeful about the 2014 migration. 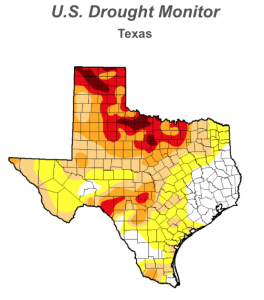 So is Dr. Chip Taylor of Monarch Watch. He told us via email that he suspects a modest increase in monarch numbers.
“I’m not ready to say what ‘modest’ means in terms of hectares but all the indications remain positive. Monarch production from the upper midwest from the eastern Dakotas through Wisconsin and parts of southern Missouri will be above that of last year–areas to the east will be low again but not quite as low as last year.”
In June, Taylor pointed out that the harsh winter we experienced after three dry summers has driven down the predator population, increasing the survival rate of Monarch caterpillars in the central breeding grounds.   “Monarch larvae should survive in greater numbers. Elevated reproductive success in early generations usually leads to growth of the population.”

Elizabeth Howard, founder of Journey North, agrees. “Yes, I do think this fall’s migration will be larger than last year’s,” she told us via email.  “However, considering how dismal last year’s migration was, that isn’t saying a whole lot.”
Journey North taps citizen scientists across the hemisphere to collect data about Monarch sightings and posts the info on a handy map so you can track the migration from your desk (see above).   They also provide weekly reports summing up the state of the migration and Monarchs’ move through the hemisphere, like this one:

“There are hopeful signs of successful reproduction from the Upper Midwest and across much of Ontario. People are reporting up to a half-dozen monarchs at a time, and more eggs and larvae than all of last year.”

“Hopeful signs of reproduction.”  Yes, we like the sound of that. Because if we can just get a slew of Monarchs produced in the midsection of the country they can start their trip to Mexico through the Texas Funnel and this year we can offer a much more welcoming reception than we’ve been able to provide in the recent past.

While the drought continues, we’ve had a relatively mild summer, with few days over 100 degrees.  Sporadic rains–more than 10 inches at the ranch just in July–have fueled the growth of late summer flowers.  Nectar plants await our favorite migrants: Frostweed, Swamp milkweed (Asclepias incarnate), and Goldenrod stand at the ready, about to bust out their blossoms for a full-on nectar party.  Send some Monarchs our way, please, and we’ll make sure they’re well fueled for the rest of their journey.
In the meantime, it’s not too early to order your tags from Monarch Watch.  Tagging season begins soon. Related posts: