The Monarch butterfly migration began in mid August. The progeny of butterflies that left the forests of Mexico in March have reproduced several times on their multi-generational journey north to Canada, and are now turning their attention south, as they head “home” for the winter. 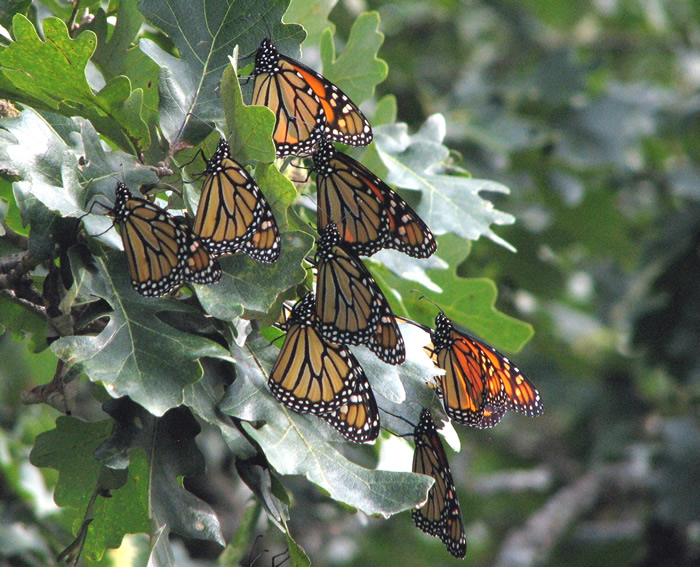 The first Monarch roost was reported in Wisconsin this week. The migration is on and they’re heading our way. Photo by Pat Swerkstron via Journey North

While it’s too early for those of us who live in the “Texas funnel” to see masses of Monarchs moving through town, it’s hard to resist running out and checking our favorite butterfly destinations to see what’s flying and which species are in town.   We should be seeing a trickle of Monarchs from now until the peak migraiton in mid October.
A check-in at the San Antonio River Museum Reach Milkweed Patch this weekend didn’t disappoint.   Queens and Gulf Fritillaries were flying profusely, and one lone female Monarch joined the nectar party, frantically laying eggs on a dozen or more different Tropical Milkweed plants.
I checked the leaves she visited, hoping to spot some eggs–but no luck.   Just aphids. 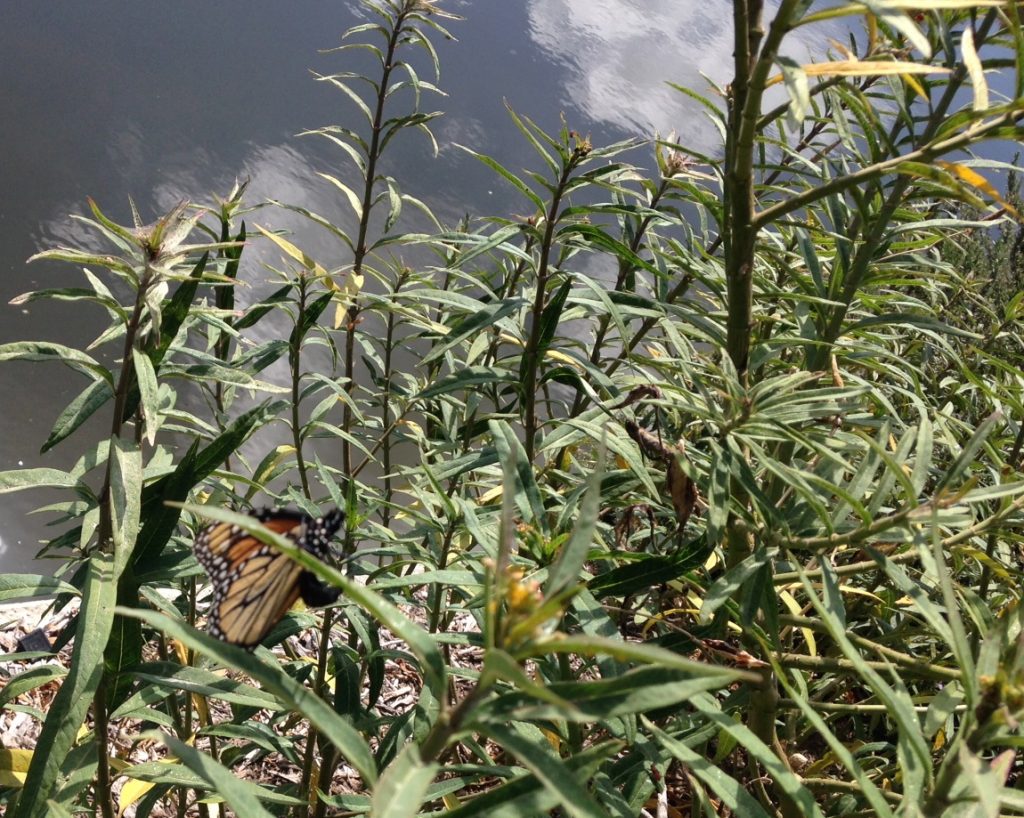 Female Monarch butterfly “shooting blanks?” Apparently. Note how her abdomen is tucked under to lay eggs.  Photo by Monika Maeckle

So what was up, was she shooting blanks?
“Hard to say,” Dr. Chip Taylor of Monarch Watch told us via email.  “Could be blocked ducts, lacks mature eggs, having trouble moving an egg down the oviduct.  It happens frequently.”   Professional butterfly breeder Edith Smith of Shady Oak Butterfly Farm confirmed that this is not unusual.  “I’ve seen the same thing, normally caused by a clogged duct,” she relayed via email.
Since reproductive Monarchs do not migrate, this one will likely stay in the neighborhood.   Migrating Monarchs must preserve their energy for their long trip to Mexico.  Once they reach Michoacán, they roost for the winter, wake up in the spring, and reproduce then.  So if you see a Monarch laying eggs or mating, don’t tag it. 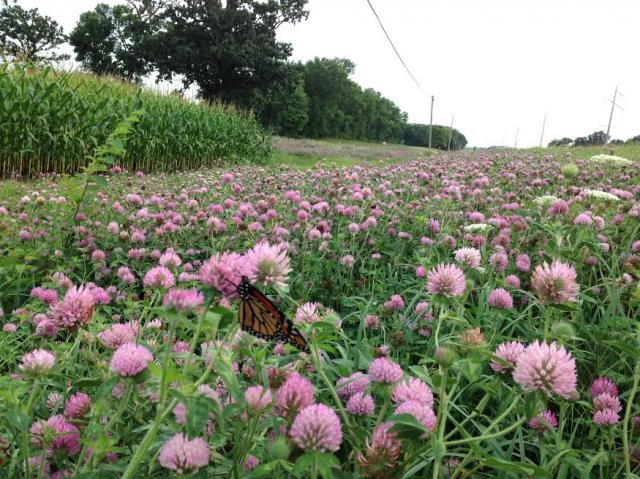 Monarchs nectar intensely when in migration mode–wouldn’t you, if you had to fly 3,000 miles? Photo via Journey North, by Elizabeth Howard

Monarch Watch discourages citizen scientists from tagging Monarchs before August 15 because it’s basically a waste of time.
“We generally send out tag orders starting in the first few days of August, giving priority to the most northerly areas. If we start sending tags in July, folks will tag more of the late breeders than they do now. This would be unproductive since the late breeders don’t migrate,”  Dr. Taylor explained to the DPLEX list, the email listserv that reaches hundreds of butterfly fans, academics, citizen scientists and others.

But further north, folks are already tagging in what appears to be a rebound season.
According to Journey North, a citizen scientist-fueled website that posts updates on migrations of all kinds, the first overnight roost was reported on Monday by Pat Swerkstrom of Oceola, Wisconsin.  See the photo at the top of this post to see what it looked like.
We get this kind of action in mid October when the Monarchs move through the Texas Funnel on their way to Mexico.  Typically, those of us enamored with Monarchs stage tagging outings.
Along the Llano River, they roost in pecan trees during peak migration. Hundreds, sometimes thousands of Monarch butterflies cluster like grapes as the sun sets, settling in for the night to rest and wake the next morning to nectar up and continue on their journey.  In the weeks prior, we see Monarchs in ones and twos nectaring on flowers or resting in trees and shrubs.

Looking forward to seeing this:  roost of about 200 Monarchs in a pecan tree on the Llano River in October 2012.  Photo by Monika Maeckle

This year looks like it could be a rebound for Monarchs.   Conditions are favorable in the midwestern breeding grounds and milder temperatures than recent years prevail in the Southwest.
For those with no access to roosting sites who want to see Monarchs, seek out nectar destinations like pollinator gardens, wildflower patches on roadsides–any place with flowers that will draw the migrants on their journey south.  Remember, their primary goal when migrating is to fuel up and store fat for the long winter.
Related posts: