The Texas State Comptroller’s office awarded the University of Texas at San Antonio a $300,000 grant to study the Monarch butterfly this week.   Dr. Janis Bush, a plant ecologist and the university’s director of environmental science academic programs, will oversee the research. 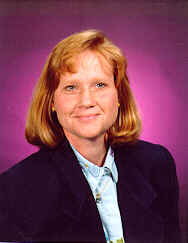 According to a press release issued by the Comptroller’s office, the study will “evaluate the abundance, species type and distribution of milkweed—an important food source for Monarchs —in Texas. It also will examine land management approaches to enhance the abundance of milkweed if necessary.”
Why is the State Comptroller’s office awarding grants for butterfly research?
Because in Texas, the Comptroller’s office oversees the Interagency Task Force on Economic Growth and Endangered Species. It’s charge: assist landowners, industries and local communities in working with endangered species issues and assess their economic impact on the state. And since the Monarch butterfly was submitted for consideration as a “threatened” species under the Endangered Species Act last August, research surrounding the ramifications of such a listing falls in the Task Force’s wheelhouse.  Annual $5 million appropriations approved by the Texas Legislature will fund the UTSA grant; Dr. Robert Gulley of San Antonio heads up the Task Force.
Dr. Bush said via phone that the survey will take place over two years and replicate research done by Dr. William Calvert in 1996 which had him drive IH-10 from the Louisana border to El Paso, documenting milkweeds along the way.  Dr. Calvert, of Austin, is credited with revealing the location of the Monarch butterfly roosting sites to the world after Catalina Trail, also of Austin, led Dr. Fred Urquhart to the location in MIchoacán, Mexico back in 1975.  At the time, Dr. Urquhart wrote an explosive cover story on the discovery for  National Geographic magazine, but refused to reveal the location of the roosting sites.  Dr. Calvert did that about a year later. 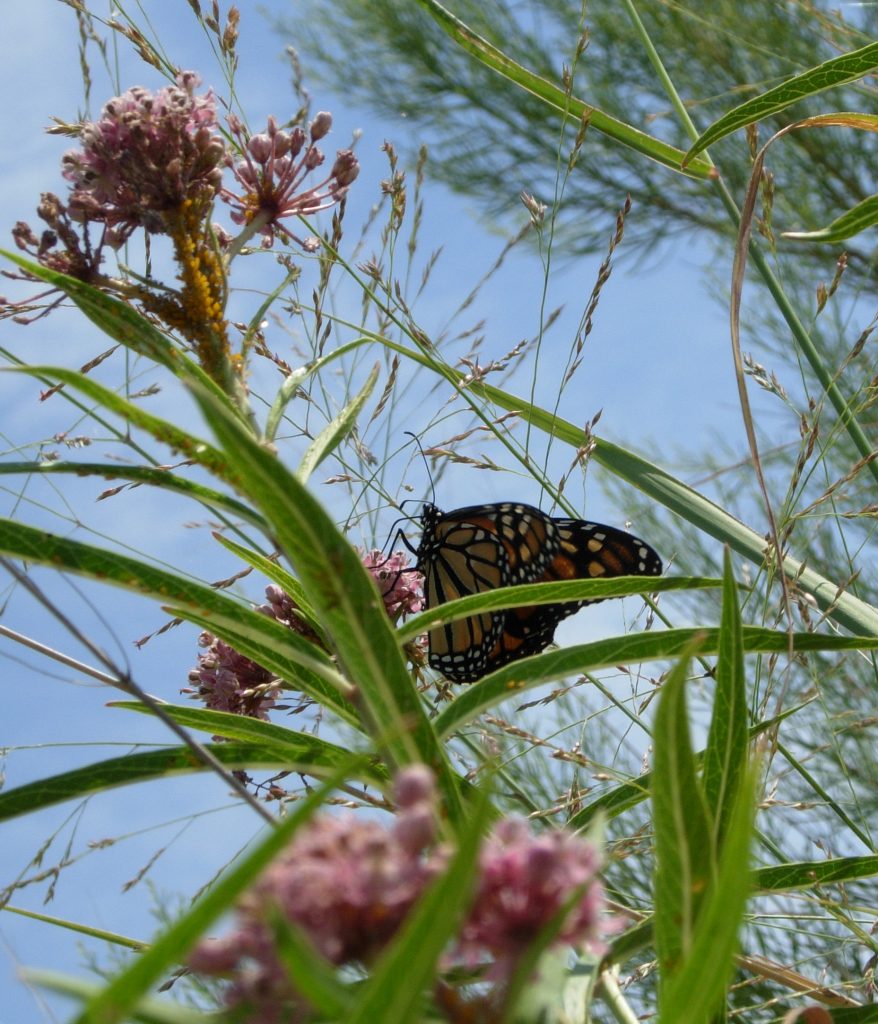 “We’ll try to duplicate Dr. Calvert’s study so we can compare the current milkweed populations to what he found,” she said, adding that the study will not just cover milkweeds, but will be a full-blown vegetation survey.
“It will include species identification for everything except grasses which will be done by family,” she said.   Graduate students will conduct the work, which will begin immediately.
In addition to plant identification, students will document the presence of any Monarch caterpillars, fire ants (which are famous for destroying Monarch eggs and small larvae) and other predators, as well as anything else that might enlighten us about creating opitmal Monarch butterfly habitat in the Lone Star State.  Read a summary of the project here.
Dr. Bush, with a PhD in ecological sciences and engineering, has extensive experience in native plants in Texas–and milkweeds in particular.   She wrote her dissertation on the federally threatened sunflower, Helianthus paradoxus, and oversaw Dr. Terri Matiella’s dissertation on milkweed when Matiella was a UTSA graduate student. 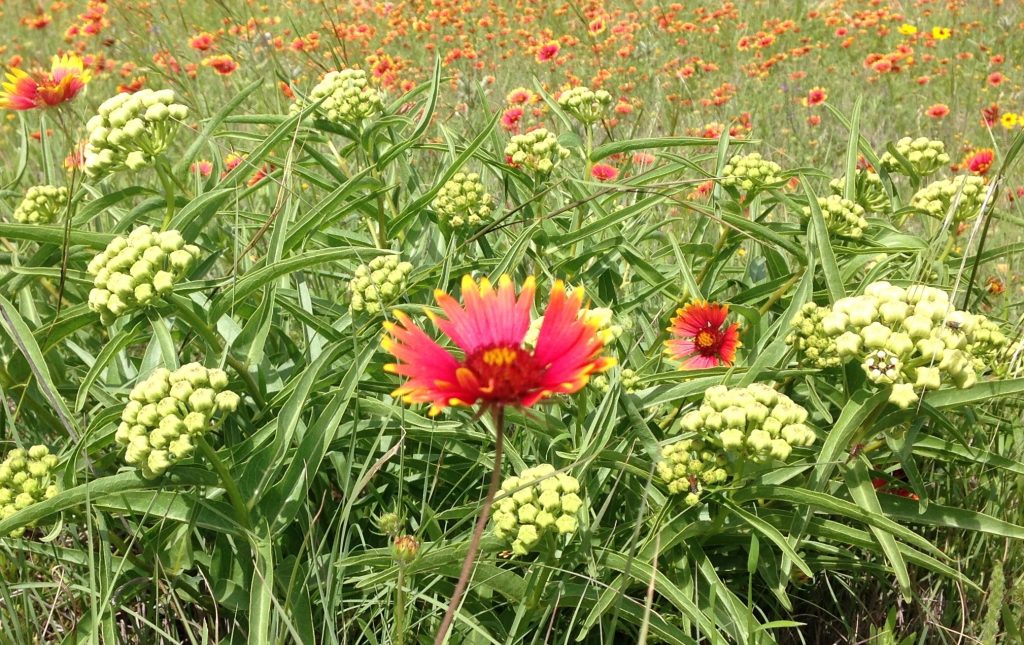 The UTSA grant will survey native milkweeds and their surrounding vegetation and other factors to help determine how to create optimal milkweed habitat.  Here, Antelope horns and Indian blanket dot the roadside in the Texas Hill Country this weekend. Photo by Monika Maeckle

Matiella’a paper, “The Effects of Carbon Dioxide on Milkweed (Asclepiadaceae) and Monarch butterfly (Danaus plexippus) larvae” focused on the impact of climate change on Asclepias curassavica, the much discussed, technically nonnative Tropical Milkweed.  It awaits publication, hopefully later this year.  Dr. Matiella now serves as a lecturer in UTSA’s environmental sciences department and will serve on the research team.
The news was well received in the passionate Monarch butterfly community, but as always, also raised questions.
“It makes sense,” said Mike Quinn, an Austin-based entomologist who runs Texas Monarch Watch and the educational website texasento.net. “San Antonio is more or less in the heart of the Monarch butterfly flyway.  Hopefully, this study will provide a clearer picture of Monarch habitat usage, or at the very minimum, the habitat that’s available to Monarchs here in Texas.”

Monarchs must pass through Texas coming and going to Mexico. Graphic by Nicolas Rivard

Others voiced concerns that the grant money was not being best utiltized.  “A lot of this stuff has already been done,” said one source involved in local Monarch activities who chose not to be named.  “There seems to be a lot of reinventing of the wheel.”
Organizations like Monarch Watch, Monarch Larvae Monitoring Project, the Xerces Society, and the Pollinator Partnership have already done significant research on what it takes to continue the Monarch butterfly migration.  And most folks who follow Monarchs in Texas agree that a lack of milkweed in the Lone Star State is not an obstacle here.
“If everyone planted grass in their front yard, it wouldn’t bring back the buffalo,” said one skeptic, adding that researchers should target milkweed plantings “to where it’s been GMO’ed out.”
That would be the Midwestern corn belt, the Monarchs’ primary summer breeding grounds.  There, genetically modified corn and soybean crops have allowed indiscriminate spraying of herbicides like Round-Up, which essentially leave fields sterile except for the corn and soybean that have been biologically altered to withstand poisons.   In the past, milkweeds grew vigorously between the corn rows providing breeding season host plant for migrating butterflies.
No milkweed studies have been conducted in the strategically important “Texas funnel” through which migrating Monarchs pass each spring and fall on their multi-generation migratory journey since Calvert’s 1996 research.  The Monarch Larvae Monitoring Project, a citizen science initiative started by Monarch expert Dr. Karen Oberhauser at the University of Minnesota, has been active here for years, religiously monitoring milkweeds and collecting data on milkweeds, Monarch butterflies, caterpillars and eggs at the Milkweed Patch along the San Antonio River and at Cibolo Nature Center in Boerne.   While that data and the contributions of citizen scientists are immensely useful and well recognized, more scientific data is needed to figure out how to create optimal milkweed habitat, said Dr. Bush.
“We need to answer questions like what is the herbaceous cover around existing milkweeds?  Do they like competition from other plants or do they like open areas? Are native and/or nonnative grasses growing nearby?  What is the soil depth?” she said.
After two years of study, we should have a better idea of how private and public landowners can best manage their properties to increase milkweed and pollinator habitat.  We look forward to the findings.
Related posts: