The battle to list the Monarch butterfly as “threatened” under the federal Endangered Species Act inched forward last week, as the Center for Biological Diversity and Center for Food Safety announced they will file suit against the US Fish and Wildlife Service (USFWS) for failing to meet a December 26 deadline.

Will Monarch butterflies be listed as “threatened” under the Endangered Species Act?  Photo by Monika Maeckle

The intent to file suit was announced in a January 5 press release and will be acted upon in 60 days if no ruling is made.
Those specializing in endangered species issues said such lawsuits are not unusual in the often convoluted listing process. After providing an update to the Texas State Comptroller’s Monarch Butterfly Task Force Working Group in Austin last moth, Katie Latta, USFWS Monarch Outreach Specialist, said such lawsuits at times delay the process and other times speed things up.

David Braun, Principal of Braun & Gresham, a Dripping Springs, Texas-based law firm that works with private landowners and communities on endangered species issues, said, “It’s not unusual, but frankly I think it sometimes slows things down.” 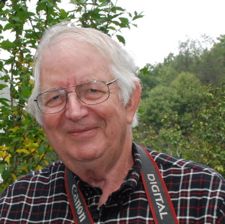 Monarch butterfly expert Dr. LIncoln Brower, who joined with the Center for Biological Diversity and Center for Food Safety in filing the petition in August of 2014, was among the first to share the news on the DPLEX email list, a listserv of about 800 Monarch butterfly enthusiasts, scientists and citizen scientists.
In sharing the news, Dr. Brower pointed out how powerful the petition has been in galvanizing support for Monarch butterfly and pollinator habitat.  It has stimulated “all sorts of positive national and international actions to help what is an increasingly serious problem,” wrote Brower.
Commercial butterfly breeders, who oppose clauses in the petition that support an end to the commercial breeding and shipping of Monarch butterflies, took the news in stride.

“Lawsuits resulting from an impassioned and hot button issue such as Monarch butterflies come as no surprise,” said Kathy Marshburn, president of the 100-member International Butterfly Breeders Association (IBBA), a trade association for those who make a living breeding and selling butterflies.
The Association for Butterflies, another butterfly breeding interest group of 81 commercial and hobbyist breeders (including me), quickly relayed the news to its membership which provoked a general consensus that “the lawyers” will be the only winners in the saga.

The petitioners believe that commercial breeders release diseased butterflies into the wild population, potentially damaging it.  In particular, the Monarch-centric spore, Ophyrocystis elektroscirrha (OE), poses a special threat. OE thrives in conditions where the butterflies congregate in large groups, are crowded (presumably as in breeding operations), and/or where milkweeds overwinter.  Recent studies by University of Georgia scientists raise concerns that OE spores, which transfer from the butterflies to their milkweed host plant,  will be consumed by and infect subsequent generations of caterpillars, carried into the next season, and ultimately, jeopardize the migration.

Yet scientists agree that OE already is present in the wild population, just as Streptococcus, the nasty sore throat-causing bacteria, is present in the human population. Scientists use a 1-5 rating system to determine the extent to which a Monarch butterfly is infected.  On her Monarch parasites webpage, OE expert Dr. Sonia Altizer and her University of Georgia team recommend destroying any Monarchs which are infected by putting them in the freezer for an hour.
Both the IBBA and the AFB have taken steps to educate their memberships about best practices for raising healthy, OE-free butterflies in response to the petition. 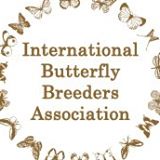 IBBA President Marshburn relayed that courses given by Monarch scientists Dr. Sonia Altizer and Dr. Jaap de Roode have been provided to IBBA members at no charge.  Coaching calls by the IBBA’s most experienced breeders and discounts for pathology screenings are also offered.

The AFB has also worked to educate its membership. President Tatia VeltKamp shared plans for a voluntary OE pupae screening with an independent lab as well as a seal farmers can earn and display on their websites when they complete a four-week disease course.

Education is a step in the right direction, but commercial breeders need to be more aggressive in creating some kind of mandatory self-regulation to ensure healthy livestock don’t damage the wild population.  Independent random OE testing of commercially bred butterflies would go a long way toward assuaging concerns.  The USDA already regulates the transport of butterflies across state lines, requiring shipping permits and forbidding certain species where they are not native.  But OE demands a special check. 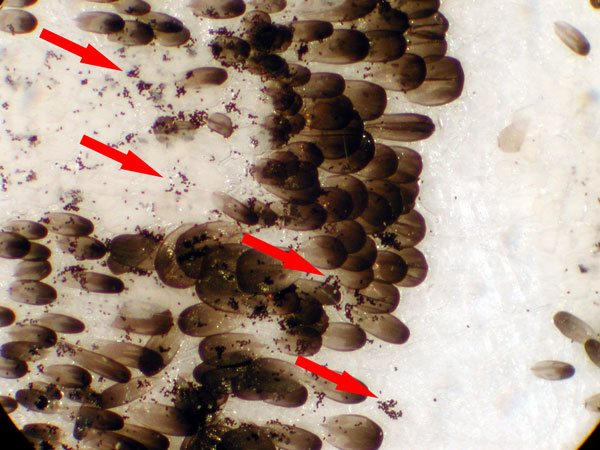 OE spores are the smaller dots. The larger football shapes are scales. Photo via Monarchparasites.uga.edu

Another option would be to have an independent firm inspect and certify OE free environments at farms. Findings would be published online and butterfly buying customers could choose the reputable “clean” breeders before making a purchase.

I admit to having a soft spot for commercial butterfly breeders. For a brief time, I wanted to become a breeder and joined the IBBA. I got to know this wonderful group of butterfly enthusiasts and learned to respect the challenge of breeding healthy butterflies on deadline.  It’s hard work.

In addition, every butterfly breeder I met through these organizations gravitated to the business because of pure passion for butterflies and a desire to share it. 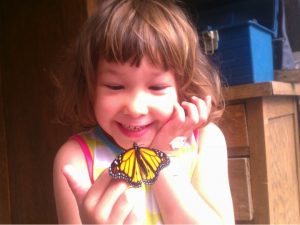 The magic and engagement resulting from interactions with butterflies is one of the most powerful tools in the conservation arsenal. Photo by Tracy Idell Hamilton

There’s a place in Monarch butterfly conservation for commercial butterfly breeding. The magic, education and joy that result from the tactile experience of the inter-species connection of butterfly release events and education have the capacity to touch people and make them care.  Interacting with Monarchs in a tactile way serves as one of the most powerful tools in the conservation arsenal.  It should not be reserved only for scientists, professionals, or those with access to wild milkweed patches and gardens, which is what would happen if commercial butterfly breeding were outlawed by the petition’s enactment.  City kids would be completely cut out of this experience if the Monarch becomes listed. And that would be a shame.

Continued lethargy by the IBBA and AFB on self-regulation will contribute to more scrutiny of commercially bred butterfly livestock and could result in more government regulation of their industry.   At best, inaction fosters a PR problem; at worst, it spells the demise of their industry.

Meanwhile, this focus on professional breeders does nothing to address the many butterflies raised at home by people like me who know way less about clean breeding than those who make their living from it.  Based on personal experience and from the active exchanges on the DPLEX list, thousands and thousands of butterflies are raised and released by hobbyist enthusiasts each season. Do those rearing at home bleach their caterpillar cages, wear disposable plastic gloves, provide each caterpillar with their personal container?

Few of these home-reared butterflies, if any, are checked for OE.  Even if Monarchs are listed, I can’t imagine people stopping this practice, which would limit enthusiasts to 100 butterflies per person/per year.  That suggested number increased from 10 per year in the petition after much public outcry.  I agree with Dr. Brower that the petition has done much to galvanize interest and support in Monarchs and other butterflies–including raising them at home. 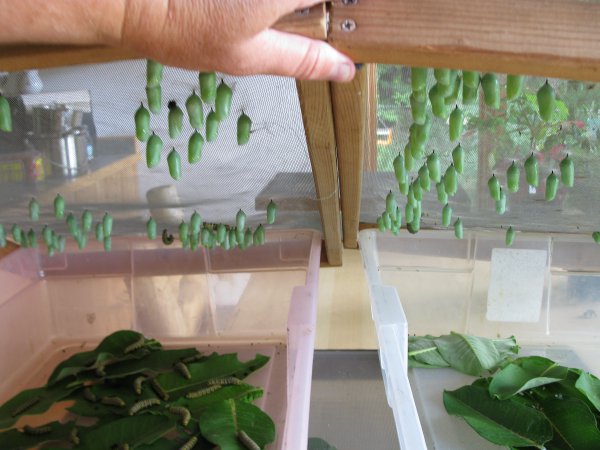 Hobbyist breeders unleash thousands of Monarch butterflies into the universe each season. How many have OE? Photo by Tami Gingrich of northeastern Ohio via Facebook

The reasons for the general decline of Monarchs are well documented: genetically modified and herbicide tolerant crops, continued urbanization and habitat destruction along the migratory path, illegal logging in Mexico, climate change, and pesticide use.  Is OE, one of many diseases and natural threats to Monarchs and other milkweed feeders a major factor in the Monarchs’ decline?

Some scientists think so.  Dr. Andy Davis, who is married to Dr. Sonia Altizer, has stated emphatically that the Monarch butterfly is not endangered but that he supports the petition because he thinks OE is the number one threat to Monarchs.

In a recent blogpost on his extremely readable MonarchScience blog, Davis stated: “That’s right, the Monarch declines are not a sure thing.”

In a November 7, 2015 blogpost headlined Why I signed the petition to list Monarchs, even though the evidence for declines is shaky, Davis laid out his logic for supporting the petition. “If I don’t think Monarchs are declining, why did I sign it? It was actually because of a small clause that was buried in the fine print – that stated if the listing was enacted, it would become illegal for people to rear more than 100 Monarchs.”

Davis is adamantly opposed to people raising Monarch butterflies in large numbers because he feels that OE is the number one threat to the Monarch migration. As the contentious debate to answer that question continues, commercial breeders could make a huge contribution to the cause by developing credible ways to eradicate OE in their livestock.
Related stories: