The Texas Butterfly Ranch and our community collaborators are proud to present the 2019 Monarch Butterfly and Pollinator Festival, October 12 – 20.

Now in its fourth year, the celebration of science, citizen science, art and understanding will take place at various locations in San Antonio, Texas. The Festival falls during peak monarch butterfly migration season, when migrating monarch butterflies east of the Rocky Mountains funnel through Texas on their way to Mexico to roost for the winter. It’s a story of butterflies without borders, and one the San Antonio community celebrates.

San Antonio’s Monarch Butterfly and Pollinator Festival grew out of the National Wildlife Federation’s 2015 Mayor’s Monarch Pledge. That’s when San Antonio became the first “Monarch Butterfly Champion City” in the country by committing to all 24 action items recommended by NWF to expand and encourage pollinator habitats in cities along the IH-35 corridor. One of the action items required was to have a festival.

As of this writing, five other cities have joined the esteemed club, most recently Montreal, Canada, which became the first city in Canada to commit to all action items. NOTE: In Canada, the status is labeled as “gold” vs. Champion.

The San Antonio Festival has evolved from an ad-hoc gathering at the historic Pearl to a week-long community celebration of the monarch butterfly migration and the insect and wildlife pollinators that make one of every three bites of our food possible.

Said San Antonio River Authority General Manager Suzanne Scott: “The Monarch Butterfly and Pollinator Festival syncs perfectly with our goal of forging meaningful connections with the San Antonio River as we work to provide healthy creeks and rivers for a thriving ecosystem.”

Both The Pearl and the River Authority, along with HEB, the John and Florence Newman Foundation and Trinity University, have supported the Festival since its inception.

Hundreds of monarch butterflies will be tagged and released in the name of citizen science at this year’s Monarch Butterfly and Pollinator Festival. File photo

This year’s festivities begin on Saturday, October 12, with a teacher training workshop and continue all week with educational events, a movie screening, a bug lunch featuring food made from insects, and a timely forum on Friday evening, October 18, “Butterflies without Borders: migration and immigration in a changing climate.” 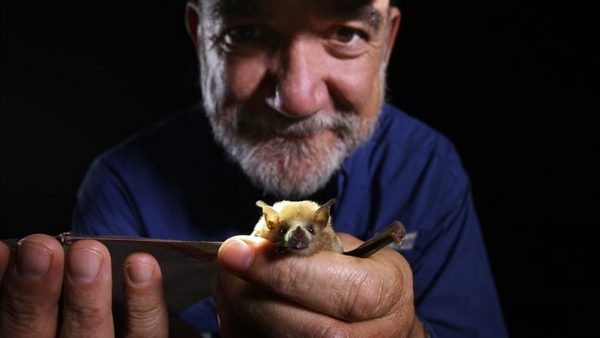 Rodrigo Medellín, the “Bat Man of Mexico” will join us for the Monarch Butterfly and Pollinator Festival. Courtesy photo

The Forum includes experts from both sides of the border discussing the impact of climate change on immigration and migration in a world getting hotter. The panelists include:

On Saturday evening, October 19 at Confluence Park, Medellín will present a special talk and presentation on bats and their role in making tequila and mezcal possible. Agave-inspired food and beverages will be served along with a heavy dose of education. Details and ticket info coming soon.

The week closes with the actual Festival on Sunday at the historic Pearl. A People for Pollinators Parade, monarch butterfly tagging demos, educational booths and activities by community partners and more. COSTUMES ENCOURAGED–and don’t forget to get your wings on!

The Festival community extends special thanks to the event’s founding sponsors, The Pearl, HEB, San Antonio River Authority, the San Antonio River Foundation, and the John and Florence Newman Foundation for their support in pollinating such a successful event.

See our Festival page for the full schedule, which will continue to evolve. We’ll be adding more detail and more events, so check back for updates.

Curious about sponsorship or partnering? Leave a comment below or email us at butterflybeat@gmail.com. Meanwhile, here’s a recap of last year’s Festival.