National Public Radio’s John Burnett, who’s been covering the border, immigration and migration issues for decades, will join a panel discussion as part of the 2019 Monarch Butterfly and Pollinator Festival.

The panel, Butterflies without Borders: migration and immigration in a changing climate, will cover a broad range of topics, from the state of the monarch butterfly migration to the impact of politics on border crossings for wildlife and people in a changing climate. The event takes place at the Pearl Stable Friday, October 18, 6 – 8 PM. Tickets here. 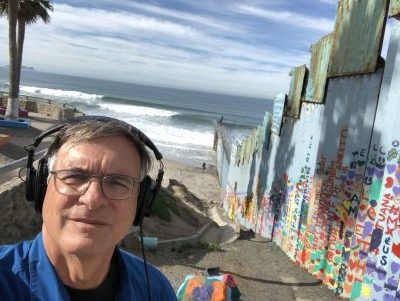 Burnett attended Trinity University before heading to the University of Texas at Austin to earn a degree in journalism. One of his first journalism gigs was as a reporter for the San Antonio Express-News in the 1980s.

“San Antonio is where I got interested in Latin America and the border,” said Burnett via email, taking a break from a vacation in Spain. “I got to cover South Texas, the Pope in Central America, and Guatemalan refugee camps in Chiapas.” Burnett worked for the Sunday paper, writing long feature pieces, back when San Antonio was a two-newspaper town.

Burnett covers the border and immigration issues for NPR from his base in Austin, Texas. These days, his beat encompasses the  unfolding stories and lives of immigrants, as well as general border relations and immigration policy under President Donald Trump.

“It’s changed,” he said, when asked why people migrate. “They all used to migrate for economic opportunities, and now many are fleeing rampant extortion by criminal gangs. So the migrants used to be young go-getters, the kind of people a country needs to stay at home and work, but now you see whole families escaping their communities for their own survival.”

Burnett added that on a recent trip to El Salvador, he met several deported young mothers who risked their young childrens’ lives to cross into Texas. He also encountered young heads-of-family who had “truly hellish stories of crime gangs.”

Meet NPR’s John Burnett at our Butterflies without Borders Forum, Friday, October 18, at the Pearl Stable.

When asked to draw corollaries between the migration of insects and the migration of people, Burnet suggested both seem to expand their range to places where population pressures are less. “Perhaps an analogue to monarchs are the economic migrants who used to go back and forth between jobs in the U.S. and family in Mexico or Central America.” They can’t do that anymore because of a fortified border, he said, adding, “They’d flutter if they could!”

During his years with NPR, Burnett has earned the title “roving reporter.” He’s filed dispatches from 30 countries, won numerous awards, and developed a reputation for finding stories that reveal a hidden reality. One of his most memorable dispatches: in 2001, he happened upon Carlos Garcia, a Mexico City street musician who plays a musical leaf. Yes. An ivy leaf. The chance encounter brought a rare and beautiful art form to a national audience.

In 2018 and 2019, he won an Edward R. Murrow Award from the Radio-Television News Directors Association for continuing coverage of the immigration beat, and he was invited to participate in a workshop on Refugees, Immigration and Border Security in Western Europe, sponsored by the RIAS Berlin Commission.

An avid cyclist, Burnett unwinds riding his “dream bike,” a carbon fiber, Specialized Roubaix.  He also plays blues harmonica with the Who Do Band, a group of Austin musicians who gather occasionally to make music.

Join us October 18 at the  Butterflies without Borders Forum to hear Burnett’s unique and informed perspective on migration and immigration in a changing climate.