One group of travelers not canceling their flight plans this spring: monarch butterflies.

That said, the migratory population currently heading north from their winter roosts in Mexico will be 53% smaller than last year.

Conservationists calculate the monarch butterfly population by measuring the amount of forest occupied by the overwintering insects. According to Mexican officials at WWF and CONANP, the Mexican Commission on Biodiversity, the 11 colonies located this season covered 2.83 hectares–about seven acres. That number represents a 53.22% decrease from last year’s population estimate of 6.05 hectares, or about 15 acres.

Explanations for the decline vary. 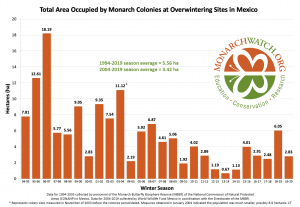 Chip Taylor, founder of Monarch Watch, a citizen science organization devoted to the insects based at the University of Kansas at Lawrence, said in a recent blog post that despite a robust breeding season throughout the summer, monarchs experienced drought conditions in Texas and entering northeastern Mexico last fall. He speculated that the dry conditions and a late migration took a huge toll on the insects. He also noted that late season monarch butterflies sampled last fall in Kansas, “were both smaller than average and substantially below average in mass and thus ill-prepared to reach Mexico.”

Andy Davis, a migration studies expert at the Odum School of Ecology at the University of Georgia, believes “the migration itself is the weakest link” and a primary cause of declining monarch butterfly numbers. “That the migration is such a critical phase of the life cycle is something that I think a lot of folks, including scientists, have traditionally overlooked,” said Davis.

Keep an eye out for faded, migrant monarchs like this one spotted in 2019. Photo courtesy Lee Marlowe

Monarch butterfly expert Karen Oberhauser, in a special letter to members of Journey North, a citizen science organization that tracks wildlife migrations including monarchs, put the population drop in perspective.

“Saying that the population decreased 53% from last year is not very informative,” wrote Oberhauser, director of the University of Wisconsin Arboretum. She pointed out that the long-term average since the colonies were first measured is 5.62 hectares, while the mean for the past decade is 2.82 hectares, almost exactly what was measured this year. “Thus, 2019 was an average year for monarchs over the past decade.”

The news hit hard in San Antonio, the nation’s first Monarch Butterfly Champion city, so named by the National Wildlife Foundation (NWF). In 2015, San Antonio became first in the country to commit to executing 24 action items identified by the NWF to increase pollinator habitat in cities along the IH-35 migratory corridor.

Texas has always been critically important to the monarch butterfly migration because of its location between the roosting grounds and the milkweed beds and nectar prairies that serve as host and fuel sources for the famous insects. Millions of monarchs pass through what’s known as the “Texas funnel” each spring and fall as they make their multi-generation migration from the Mexico to Canada and back.  Spring in Texas is a critical time for the monarchs, as they seek out milkweed plants–their host  and the only plant on which they will lay eggs and reproduce.

“Such disappointing population numbers!” said Cathy Downs, Conservation Specialist for Monarch Watch. Downs, who does educational presentations and workshops on monarchs in Texas from her base in Comfort, attributed the downturn to a late migration and drought last year.

“Double whammy, apparently, for overwintering mortality,” she said.  Warmer weather takes a toll on the migrating insects, causing them to burn through fats they’ve built up migrating in the fall.

“It’s very disappointing to see such a significant decrease in their population size,” said Lee Marlowe, president of the San Antonio chapter of the Native Plant Society of Texas and ecological restorationist for the San Antonio River Authority. “This is a wake-up call for us to do what we can to conserve, protect, connect and enhance monarch habitat throughout their migratory pathway.” 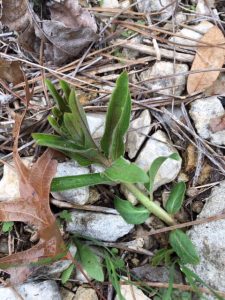 Arriving butterflies should should find a bounty of wildflowers in Texas. The Ladybird Johnson Wildflower Center recently predicted an overall good season for 2020.

Much depends on weather. Recent rains bode well. A survey of local observers suggests milkweed, the monarchs’ host plant, is just starting to emerge from the soil.

Downs reported dozens of seedlings of two different milkweed species peeking from the earth in Comfort. “I’ve seen three worn and two fresh monarchs so far flying through and nectaring here- no eggs yet,” she said.

Monarchs have also been spotted along the San Antonio River and in neighborhood pollinator gardens.

“Monarchs in the yard today,” said Drake White, of the Nectar Bar, a local native landscaping company. “Worn ones, so the migration has started.”