When COVID-19 hit in early 2020, people looked for villains to blame for the worldwide pandemic. Early scapegoats included bats, the often vilified, night-flying mammals associated with Dracula and blood-sucking terror.

But bats are not the culprit, said Rodrigo Medellín, a senior professor of ecology at the Universidad Nacional Autonomy de Mexico and subject of The Bat Man of Mexico, a 2015 BBC documentary narrated by Sir David Attenborough. The hour-long movie chronicles Medellín’s mission to prevent the extinction of the Lesser Long Nosed bat, Leptonycteris yerbabuenae, commonly known as the Tequila Bat because of its role in making tequila happen. See trailer, below. 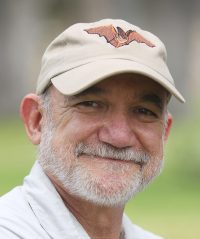 “The culprit can easily be found if you look in the mirror,” Medellín said recently. “Our insatiable appetite for ecosystem destruction and biodiversity eradication,” are to blame, he said, adding that “the coronavirus carried by bats cannot infect us, despite what you hear from supposedly reputable scientists.”

Medellín has spent his entire life as an ambassador for bats. The youngest of five children and a born animal lover, the first word he ever uttered was not “mama” or “papa,” but “flamingo.”

His lifelong passion will fuel his discussion about bats and COVID-19 this Thursday at a FREE webinar as part of the fifth annual Monarch Butterfly and Pollinator Festival.

The virtual event will also make the connection between bats and the popular alcoholic beverages Mezcal and tequila, which come from the agave plant–which is pollinated by bats.

Medellín will lead the webinar with a Mezcal and/or tequila toast to the misunderstood creatures, and San Antonio restauranteur Johnny Hernandez will provide a  cocktail-making lesson utilizing ingredients made possible by bats and other pollinators. Details and registration link here.

Medellín has won multiple awards for his bat and mammal activism-the Whitley Award, the Rolex Award for Enterprise, Mexico´s National Nature Conservation Award, and the VW Award for Love of the Planet. In addition to deep understanding of bats, he’s an expert on jaguars, ocelots and bighorn sheep.

At Thursday’s webinar, he’ll explain how bat caves and bat colonies in dozens of countries around the world have been unfortunately destroyed because of “misinformation, ignorance, and unscrupulous scientists.” Such inaccurate reports triggered the mass killing of bats and the destruction of their roosts at a cost that is likely to cause further human discomfort and disruptions in ecosystem functioning, he said.

As the National Resource Defense Council noted on their website in June, it’s a bad time to be a bat.

“Bats have a very robust immune system because of their physiology,” said Medellín. Their strong antibody responses and ability to raise their temperature when they take flight allow them to effectively fight viruses and other pathogens, he explained.

“It’s very rare to find a sick bat….We should be learning about their immune systems and incorporate their mechanisms to our own ways of treating diseases in humans.”

Thursday’s FREE webinar kicks off at 6:30 PM with a toast to bats and a cocktail making tutorial by San Antonio chef/restauranteur Johnny Hernandez on how to make a “Fall Pollination” cocktail. Ingredients include Mezcal, mint, honey and oranges – all of which are made possible by wildlife pollinators. The drink is available for both dine-in and to-go at La Gloria in San Antonio. A portion of drink proceeds support the Monarch Butterfly and Pollinator Festival.