“What would San Antonio be without our abundant pollinators and natural resources that enhance our quality of life?” asked Mayor Nirenberg, addressing the crowd on a warm and breezy summer morning.  “It is incumbent upon us to protect, sustain and regenerate our natural assets,” he said, nodding toward the river. 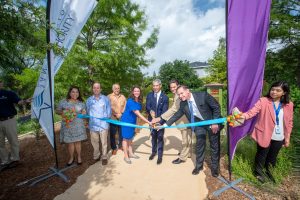 The idea for the garden was seeded more than a year ago when representatives from the San Antonio River Authority, Consulate General of Canada and the Texas Butterfly Ranch gathered to explore the possibilities for collaboration surrounding the city’s annual Monarch Butterfly and Pollinator Festival, which will take place at Confluence Park October 16. 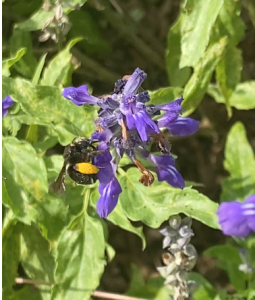 A bumble bee lights on sage while officials cut the ribbon on the North American Friendship Garden at Confluence Park June 24, 2021. Photo by Monika Maeckle

“It actually came up in the car after the meeting last March, just before COVID hit,” said Noella De Maina, Head of Political​, Economic and Cultural Affairs at the Consulate General of Canada in  Dallas.

De Maina represented Canada at the meeting, then presented the idea to Shahrzad (Sherry) Dowlatshahi, San Antonio’s Chief Diplomacy & Protocol Officer. “The rest is history…. The team in San Antonio rallied everyone together and voila! Magic!” De Maina said this week.

The 2500-square foot garden is tucked into the award-winning facility which sits at the intersection of the San Antonio River and San Pedro Creek. San Antonio rock star architects Lake Flato designed the park’s much lauded “petal pavilions” which serve as rain water catchment devices, funneling water to the park’s planted areas while providing much needed shade for programming and events.

The Friendship Garden, which sits near a Larval Host Plant garden installed in 2018 at the park, should fill in just in time for the monarch migration this fall, Marlowe said. Its dedication, originally planned for May, was postponed because of stormy weather and occurred last week.

She added that bees, flies, wasps and butterflies are already regular visitors to the plot. “A Texas Spiny Lizard has been seen hanging out at the new Bug Hotel and possibly claiming one of the cubbies for itself,” she said.

Billed as a monarch butterfly migration pitstop and waystation, the North American Friendship Garden is much more than that.

The bug hotel, designed by architecture firm Ford, Powell & Carson, offers refuge for lizards and all sorts of invertebrates. The squat, cylindrical structure sports holes on all sides that allow for air circulation and easy insect access. It’s loaded with all types of organic matter to attract bees, beetles, and other bugs. 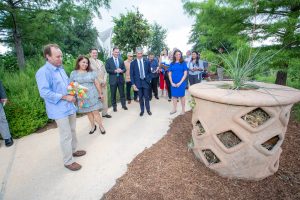 A seed library also sits on the path. It makes a variety of  FREE native seed packs available to visitors. And colorful, inviting benches point the way to Mexico and Canada in the event that monarch butterflies get lost on their multi-generation migration between the countries.

In 2015, it became the National Wildlife Federation’s first Monarch Butterfly Champion City. In 2017, UNESCO named it a Creative City of Gastronomy. And earlier this year, the Alamo City became a Bird City, Texas, an affiliation awarded by by the Audubon Society. Pollinator activists are working on achieving Bee City, USA, status via the Xerces Society.

According to De Maina, Friendship Garden plans for Guadalajara, Mexico and Montreal, Canada, are in the works.