Large, harmless and often mistaken for bats, Black Witch moths are moving through South Texas. The seasonal creatures appear every summer and seem to favor the eaves of front doors resulting in a creepy “startle factor” when they’re flushed by those returning home. 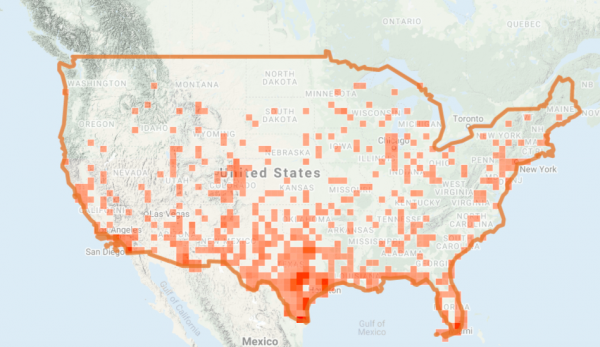 Hundreds of sightings of Black Witch moths were reported on iNaturalist in recent weeks. Photo via iNaturalist

On iNaturalist, more than 240 sightings of the dramatic moths have been reported just since July 1.

The  intriguing Ascalapha odorata, sometimes known as “the bat moth” resembles a bat in size and shape. With its seven-inch wingspan it is the largest moth in North America.  They are common in these parts.

Reports of large,  bat-like moths surprising people, frequently as they return home and are unlocking their front doors, are not uncommon.  Because of their dramatic size, when these big boys flush, they get your attention. Black Witch moth caterpillars consume legumes like mesquite and Acacia species and can grow to three inches in length.

Females have a white, sometimes iridescent stripe across their wings with wings open.  Males exhibit the plain, grey, brown mottled pattern commonly associated with moths, but with small dark eyespots on each forewing. They are perfectly harmless, not an agricultural pest, and have no teeth or stingers.

According to the Journal of Ethnobotany and Ethnobiology, Black Witch moths and their larvae are eaten by people in Mexico. Boiled in salt water or preserved in brine, “They are offered in big plastic boxes or baskets and are measured in tuna or sardine cans, or frequently in “cazuelitas” (little ceramic dishes of different sizes),” according to a January 2011 paper. In some regions they “clearly constitute an important part of the nutrition and economy of the Mexican people.” 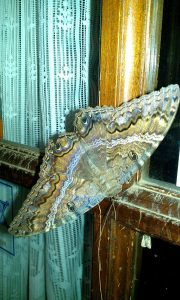 The folklore surrounding the Black Witch moth, like the moth itself, is all over the map.  In Mexico they are known as “mariposa de la muerte,” the butterfly of death. Some believe if a Black Witch moth enters the home of someone who is ill, the person will die.

Interestingly, in the Caribbean, the Black Witch moth is known as the “Money Moth” and if it visits your home, you are likely to come into cash. Here in South Texas, some believe if a Black Witch moth roosts over your door, you will win the lottery. 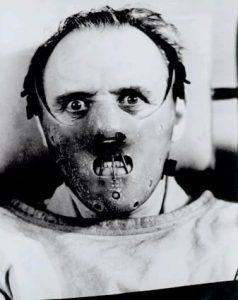 Serial killer Hannibal Lechter inserted actual Black Witch Moth cocoons into the mouths of his victims in the movie, Silence of the Lambs. Courtesy photo

Native to Central America and Mexico, the Black Witch starts migrating north through North America in the spring. The Black Witches’ large wingspan allows them to cover a lot of ground quickly.  Entomologists note that  monarch butterflies start crossing the Rio Grande and take two months to reach Canada.  Black Witches start migrating in June and have been recorded reaching Maine by June 9 and Manitoba, Canada, by June 28.  That’s a rapid pace for a moth.

In the 1991 thriller Silence of the Lambs, serial killer Hannibal Lechter inserted cocoons of Black Witch moths into the mouths of his victims as a weird gesture of transformation. The moth on the movie poster is actually a Death’s Head Hawk moth, which are not native to the U.S., but the actual cocoon was that of a Black Witch.

If you’d like to have one roost above your door to inspire a winning lottery ticket, you might try setting out a cocktail of fermented fruit or stale beer. Black Witch moths also like tree sap.