A visit to Piedra Herrada monarch butterfly sanctuary in Temascaltepec, Mexico, on Monday gave visitors a close-up view of the randy life of monarch butterflies–and hope for the next generation of the iconic orange-and-black butterflies.

“Are they still here?” we asked our guide, Maria Alvarado Gonzalez. 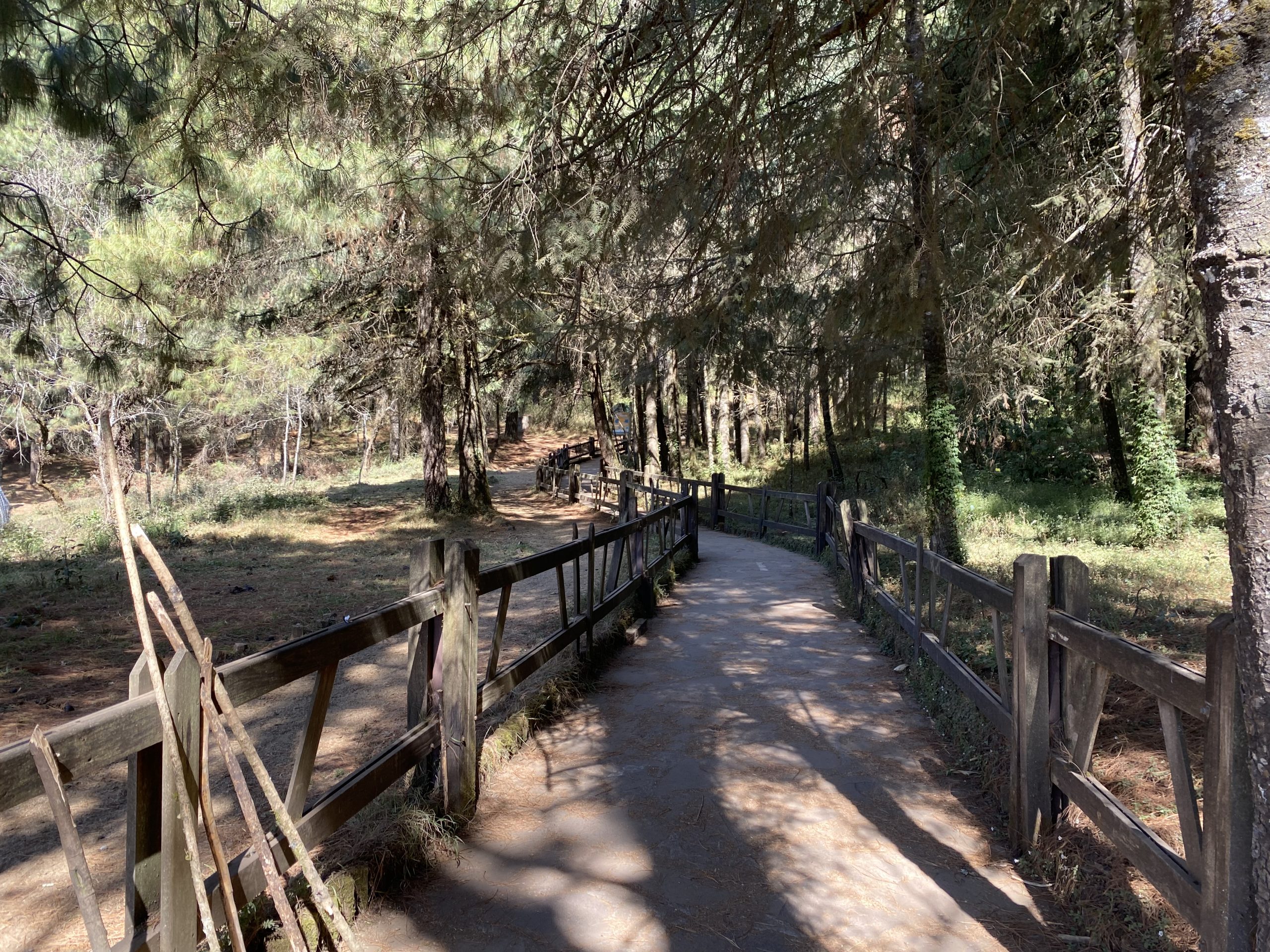 Good news: we had the entire Piedra Herrada sanctuary to ourselves for a late season visit. Photo by Monika Maeckle

Those of us who have enjoyed previous outings to the roosting sites, began the 90-minute hike wary that first-time visitors would be disappointed.

Given, our visit came late in the season when most butterflies have already departed on their multi-generation migration north, in search of milkweed on which to lay eggs that will hatch into next generation migrants. On the upside, we had the entire sanctuary to ourselves with not one person on the path our entire visit.

Few butterflies wafted down the dusty path as we made the steep climb to 10,335 feet, and Alvarado said that by next week, the butterflies will be gone.

But Alvarado knew what she was doing. As seasoned birder Gerald Robe, a fellow visitor in our group noted, “Never overpromise on a nature tour.”

As we wound our way through the Oyamel firs and pine trees, monarchs appeared, gliding through the canopy on this warm, sunny day. Temperatures hit 80, thus this was no surprise. These butterflies had survived months in the forest, delaying reproduction and living off their stored fats, lipids built up on their journey south, sipping nectar and catching wind waves during the day. Since November, they had been huddling in the forest, waiting. Now they were ready to nectar up, rehydrate and reproduce.

Bundles of butterflies at Piedra Herrada this week. Photo by Verónica Prida

At first, we spotted just ones and twos floating and flitting. Then more numerous monarchs wafted against the backdrop of a bright blue sky. Eventually, we came upon bundles of butterflies clinging to the trees, waiting for the sun to warm them enough to take flight and get busy reproducing.

Soon, monarchs were filling the skies–not as dense as they might have been a month ago, but magical and impressive all the same.

“It was an explosion of confetti of butterflies from the tall pine trees,” said Terry Ybañez, a retired teacher and artist.

We couldn’t take 10 steps without seeing a pair (sometimes three!) of mating monarchs, as the males performed their aerial takedowns of the females, landing on the forest mulch with a gentle thud.

“It was raining mating monarchs!” said Verónica Prida, our hostess in nearby Valle del Bravo who has visited the roosting sites many times. 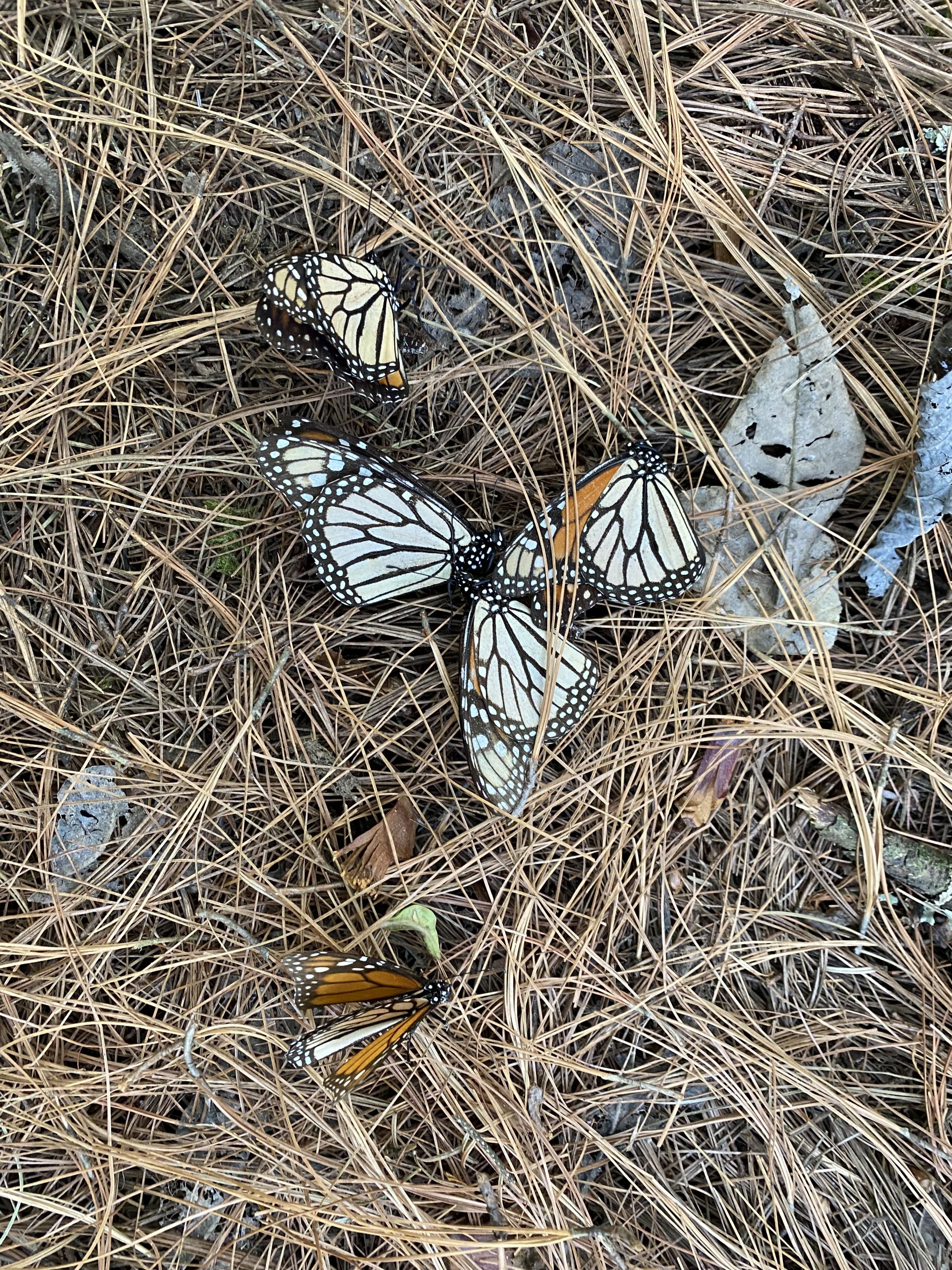 Lots of reproduction and competition for females going on at Piedra Herrada this week. Photo by Monika Maeckle

As temperatures climbed, pairs of butterflies continued their impressive courtship flights, whereby the males grab the females’ abdomens with their claspers, lift them into the air, fly for a bit, then fall gently to the ground in what seems to be a last gasp of life. Often, the males perish soon thereafter, as evidenced by the many dead butterflies littering the forest floor, most of which were males. Some males join in the journey north, passing on along the way.

According Chip Taylor, founder of Monarch Watch, a monarch butterfly citizen science program based at the university of Kansas at Lawrence, monarch butterfly copulations can last as long as 16 hours. The process of transferring a spermatophore—a protein packet and sperm—is a lengthy process.

“Males mate multiple times,” Taylor shared via email. “Lifetime mating frequency varies but can average as high as eight for both sexes. Both males and females have been recorded as mating up to 17 times. If males can’t carry females into the trees, the males may be weak or the females too heavy.”

Since the definition of success for an insect is to reproduce, it seemed laudatory and sad to watch the males use up the last of their physical resources to continue the life cycle. 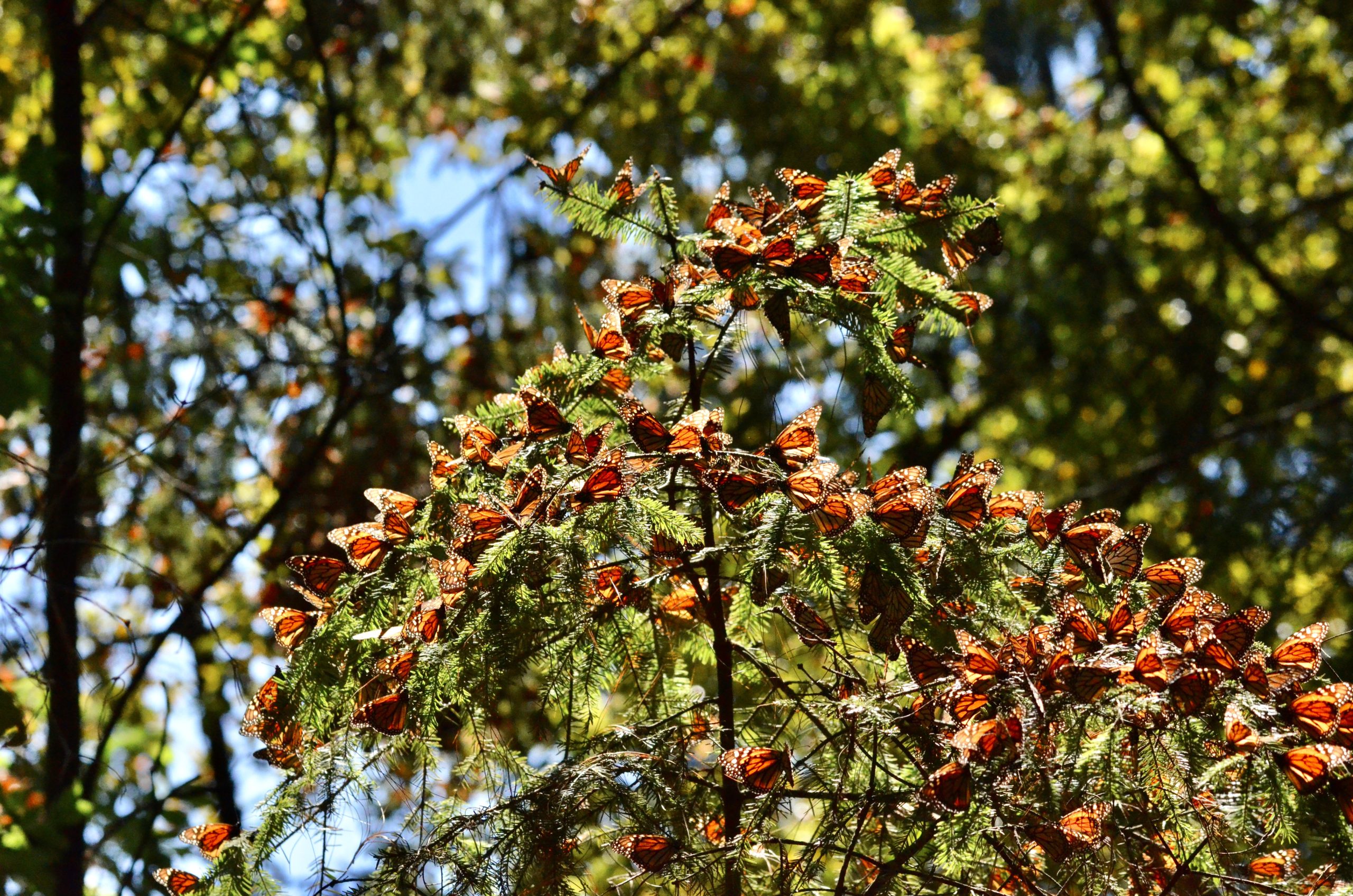 Monarchs on Oyamel at Piedra Herrada sanctuary this week. Photo by Verónica Prida

“The males die and the girls go to Texas,” remarked Omar Rodriguez, adding that yes, now the fertile females will make their way north in search of milkweed on which to lay the 2022 season’s first generation of eggs.

The group came away with nothing less than a sense of awe and inspiration.

Ana and Felix Padrón found the journey “beyond belief…both magical and spiritually rewarding.”

Ybañez described it as a gift. “I will always be blessed with the memory of las Monarcas de Piedra Herrada,” she said.