In addition to founding the citizen science organization Monarch Watch, Dr. Orley “Chip “Taylor, professor emeritus at the University of Kansas at Lawrence, has been a longtime owner of a “fruit company.” 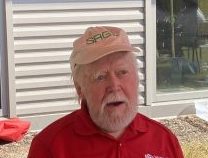 The affable entomologist with the Santa Claus beard announced at a 30th anniversary celebration of the organization this weekend that he and his wife Toni would be committing $1.4 million in Apple Computer stock to the KU Endowment, the private foundation authorized to raise funds for the University of Kansas.

At a monarch tagging outing at the Baker Wetlands Discovery Center this weekend, Taylor explained that the endowed professorship was his way of “channeling Forrest Gump.” He referred to a well-known scene in the 1994 classic movie starring Tom Hanks in which Gump describes how his comrade Lieutenant Dan “got me invested in a fruit company.”

The film has Gump opening a letter from Apple Computer. “So then I got a call … saying we don’t have to worry about money no more,” says Gump, who subsequently became so solvent that he was able to quit working, become a philanthropist, and mow grass for free.  Watch the scene here.

Taylor said he bought Apple Computer stock early on at $44 per share. “I can’t remember when, but it was early,” he said. “And it kept splitting and splitting.”

At 85, Taylor has a reputation as the padrino of the monarch butterfly conservation movement. He is well known for mentoring aspiring biologists, conservationists, activists and others. He started Monarch Watch in 1992 and built it into a community science initiative that engages 100,000+ people each year through outreach and the tagging program.

Want to tag some monarch this season? Join us at Brackenridge Park in San Antonio on October 8. Details at link above.

Taylor’s move to share the spoils of his fruit company continues his tradition of generosity.

“This ensures the future of Monarch Watch,” said Taylor. “It deserves to continue.”

The University of Kansas will be announcing a fundraising initiative to reach a $3 million goal to fully fund the endowed professorship soon.

TOP PHOTO: Chip Taylor with two of his mentees at the 30th birthday celebration of Monarch Watch–Photo by Monika Maeckle