In my day job at CPS Energy, the largest municipally owned electric and gas utility in the country, I look out my window onto the glorious San Antonio River Walk. 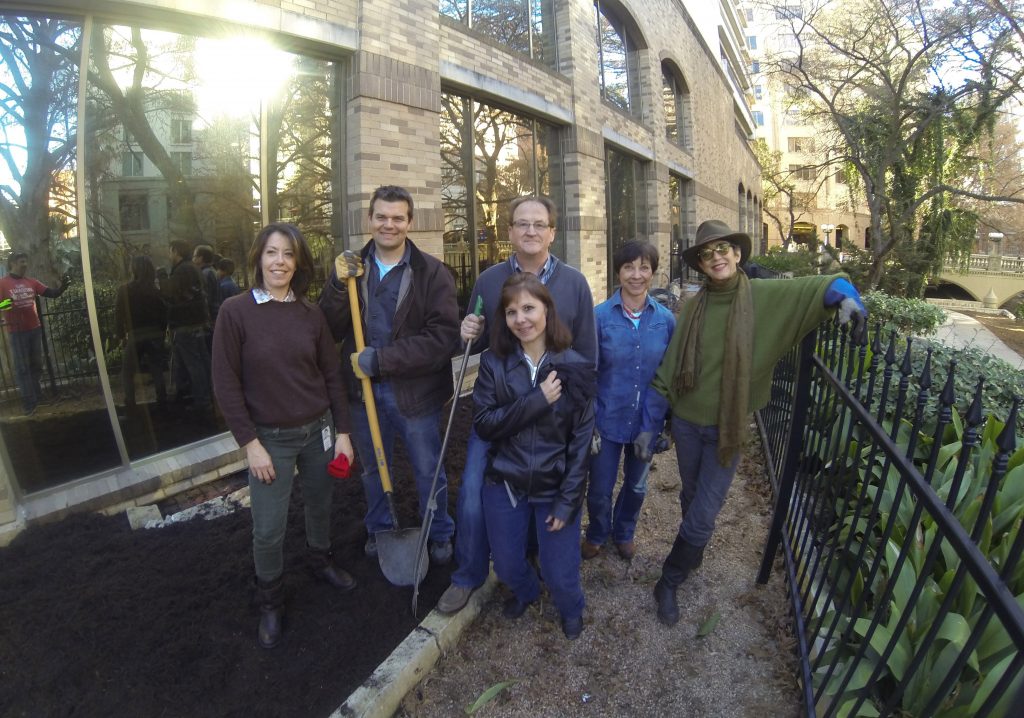 When I joined the company last year, a homogenous, overgrown patch of iron plant, occupied the small, triangular garden that separates my office from the San Antonio River. My view includes locals mingling with tourists and badge-wearing conventioneers shuffling along the sidewalk en route to hotels or meetings under the shade of grand Bald Cypress trees. Until recently, not many insects or pollinators joined the party. 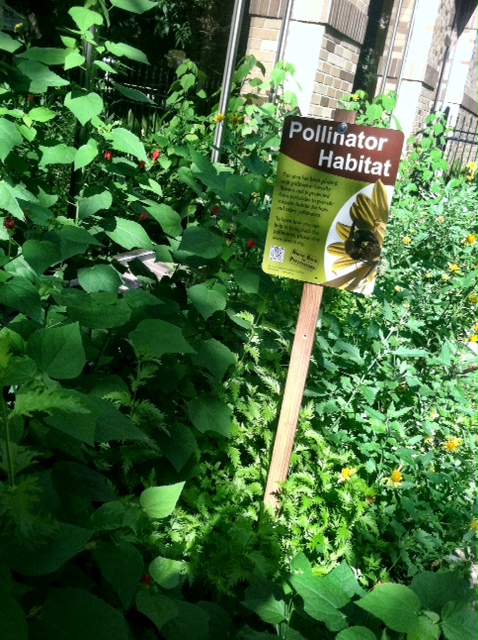 Pollinators and other creatures have gravitated to the small plot at CPS Energy. Photo by Vincent McDonald

When I accepted the position as director of integrated communications, I joked with friends that my not-so-secret agenda would be “pollinator corridors under power lines.”  I wasn’t kidding.   We’re working on that.

In the meantime, however, I wondered:   would it be possible to transform this small corner of the River Walk into a more interesting view for me and my colleagues while offering a more inviting habitat for local critters, especially pollinators? 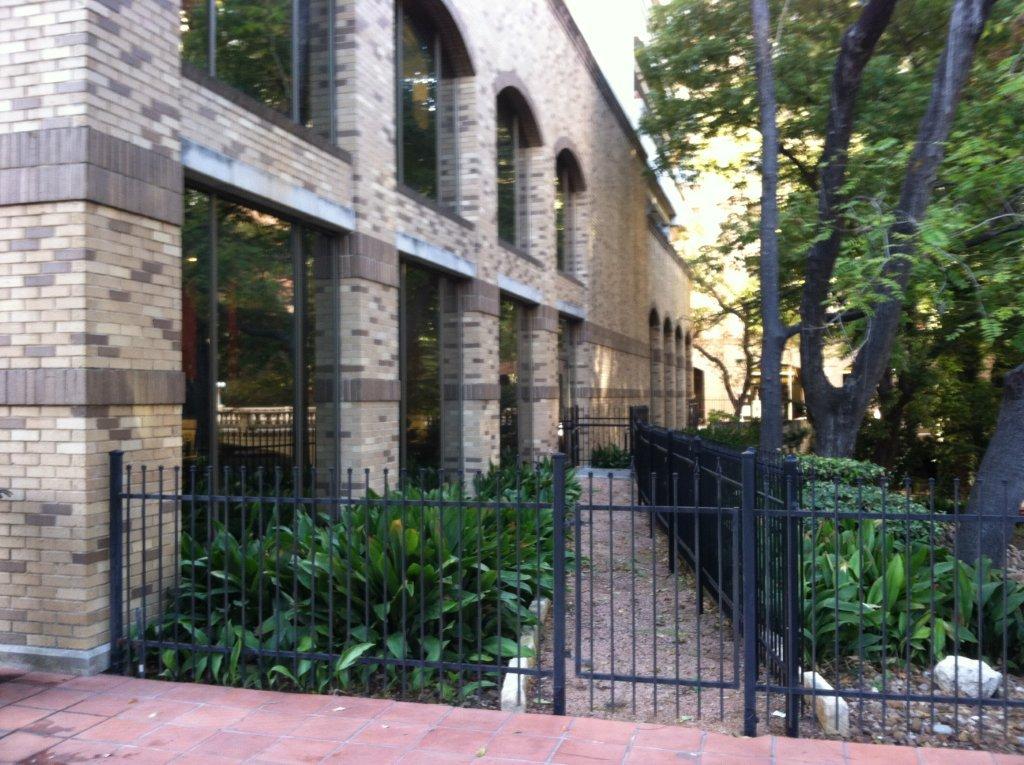 BEFORE: View from my office at CPS Energy. Iron plant on the River Walk. Photo by Monika Maeckle

The area sees mostly shade, which is why landscapers planted Aspidistra elatior.  Commonly known as iron plant, or cast iron plant, this well-adapted evergreen has a reputation for its resistance to neglect.   It thrives in shade and requires little water.

Flowers need sun and pollinators need flowers.  Dappled light finds its way to this plot in the mornings and cascades from the west in the afternoon. That’s enough for certain plants to flower.  If we chose our plants carefully, we might be able to lure butterflies or hummingbirds.   Hmmm.

AFTER: Pollinators and other creatures have gravitated to the small plot at CPS Energy. Photo by Vincent McDonald

In January, volunteers from our corporate communications team joined me in a small “Pollinator Power” experiment.  A half-dozen willing workers gathered late one cool winter afternoon to tackle the transformation of the 120-square foot plot into a pollinator habitat.
We used my favorite low-tech method of clearing undesirable plants:   hand pulling (thank you, CPS Energy landscape crew!) followed by solarization, an environmentally friendly method for ridding soil of pests, pathogens and undesirable plants executed by my corp comm colleagues.

On January 3, we laid six-10 layers of newspaper atop the soil after the CPS Energy landscape crew hand-pulled the iron plant.   We then watered the newspaper, applied four-six inches of compost and mulch, spreading it evenly.

Sorry, kitty. No milk, but would you settle for some milkweed? “Polly” the cat visits the CPS Energy pollinator garden. Photo by Monika Maeckle

Then, we waited.   Solar power does the rest.  By blocking light with the newspaper and mulch mix and using the sun’s energy to kill pathogens and weed seed, we prevent the growth and spread of undesirables.

About eight weeks later, we plugged in specific shade tolerant plants by simply carving a small hole into the mulch and newspaper with a shovel.  Plant choices were dictated by their appeal to pollinators as either host plants (where they lay their eggs) or nectar plants (which they use for fuel), and an ability to thrive in dappled sun.

These are the plants we chose and why.

After planting, we watered each plant thoroughly and tossed a handful of slow-release fertilizer into the soil around the plant base.
In May, as the weather warmed, we developed a volunteer watering schedule, dubbed our “Pollinator Posse.” Several corporate communications staff agreed to water with a hose three times a week. 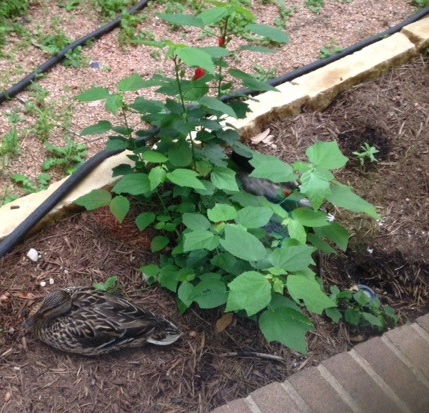 Several staff members commented that the 10-minute watering break in the dappled shade of the pollinator garden was “the most relaxing part of the day.”

In June, we sent off for our official Xerces Society sign, designating our plot as pollinator habitat, and now here we are in August, the most brutal month of the year, and the pollinator garden is thriving.

So far, we’ve witnessed visits from Queen and Sulphur butterflies, watched a black-chinned hummingbird sip from a Turk’s cap bloom, and enjoyed a pair of mallard ducks who built a temporary shelter in the garden.   A downtown kitty-cat visits from across the street at La Villita, the old Mexican market.  She lies in the shade and watches the pollinators busy themselves on the blooms.  Imagine what kind of wildlife is visiting when we’re not looking.

We’ve also had extended visits by a juvenile Golden-crowned Heron, who has decided the insects who’ve taken up residence in the garden make for tasty morning snacks.  This bird was quite comfortable at our plot, lingering long enough for us to snap multiple photos.
I would offer that for those of us with a window view–and for passersby and nearby urban wildlife–our pollinator power experiment has been a success.

We haven’t seen any Monarch butterflies.  Yet.   But we’re keeping our fingers crossed as the fall migration gets underway later this month.   Hopefully they’ll recharge at CPS Energy before making their way to Mexico.   You’ll read about it right here when they do.
UPDATE: In a previous version, iron plant was misidentified as hostas. Hostas and iron plant are in the same family but different genera. Thanks to reader Anna Osborn for pointing out the faulty I.D.