The intersection of technology and Nature continues as the Texas Parks and Wildlife Department (TPWD) announced a program to monitor milkweed stands throughout the Lone Star State this week.

The program, Texas Milkweeds and Monarchs, will be housed on the iNaturalist platform and launches as debate heats up about the wisdom of planting the technically nonnative but widely available Tropical milkweed, Asclepias curassavica, to help restore Monarch butterfly habitat in the face of the insect’s possible listing as “threatened” under the Endangered Species Act.  iNaturalist, a crowdsourced species identification system, declares its mission as “connecting people to nature through technology.”
The crowdsourced Texas Milkweeds and Monarchs project will document and map via observations made by citizen scientists where, how much, and what species of milkweed exists in Texas and whether or not Monarch butterflies are using it.

Monarchs love Tropical milkweed, Asclepias curassavica, but the plant is somewhat controversial since it is technically a nonnative yet widely available. Photo by Monika Maeckle

Since milkweed–that is, any plant in the Asclepias family–is the only host plant on which Monarch butterflies will lay eggs, its presence or absence in our landscape is critical to the migrating butterflies.  Increased use of herbicide tolerant crops and general habitat loss have spelled decline for the once pervasive wildflower.
Mark Klym, Information Specialist in Wildlife Diversity for TPWD, said the project came to fruition because education and outreach folks at the department received “multiple questions per week … about what was happening to the Monarch population, why Texas Parks and Wildlife Department was not treating them as a priority.”  California-based iNaturalist.org ” is quickly becoming the go-to platform for citizen science around the world,” he said.
TPWD began working with iNaturalist about two years ago with a herpetology  tracking project, Herps of Texas,  which now boasts 11,000 observations by more than 500 citizen scientists who’ve documented 95% of the species in Texas, said Cullen Hanks, Texas Nature Tracker Biologist for the department.  Hanks, who manages the relationship with iNaturalist, said the platform was chosen because it had a lot of the functionality needed to track and harvest “taxa data,” which is information about classifying species via their taxonomy.  (NOTE:  If you’re wondering, herpetology is the study of amphibians and reptiles.)
TPWD already has the herps project, and also a Mammals of Texas, Birds of Texas and now their first plant-tracking project, the Milkweed and Monarchs project.  Check out all the Texas iNaturalist projects.
“Sounds like a neat effort to identify key milkweed habitats in Texas,” said Monarch and milkweed scientist and PhD candidate Dara Satterfield, whose dissertation includes research on the relationship between Monarch health and Tropical milkweed, upon hearing about the partnership.  Satterfield cited milkweed mapping as a long-term goal of the conservation plan being developed by Monarch Joint Venture.
To participate, volunteers can download the app on their phone or computer. After creating a login, choose the Texas Milkweeds and Monarch project, and start contributing observations in the form of text, photos, video–even audio clips.
The process works a bit like the Journey North program which invites volunteers to contribute observations of Monarch eggs, larvae, butterflies and roosts, geolocates the observation, and maps them in real-time resulting in a constantly updated map/picture of Monarchs in all their stages. 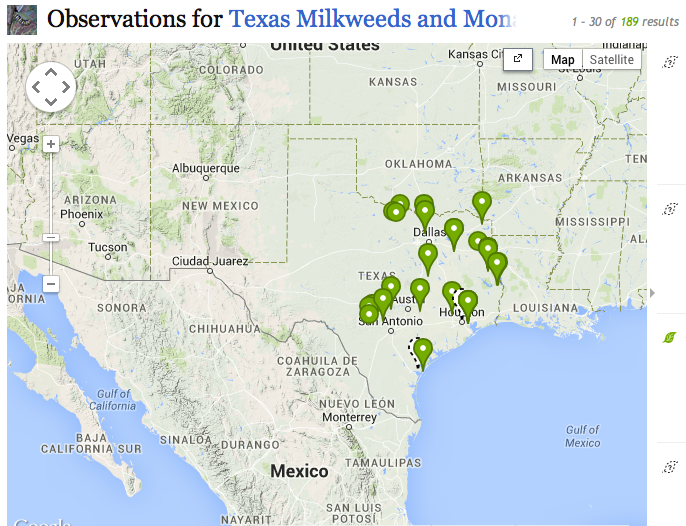 Texas Parks and Wildlife hopes to map milkweed throughout the Lone Star State via the iNaturalist app.

Contributors will be asked four brief questions about their observations, but don’t need to know specifics of the 40+ milkweed species found in Texas.  They can simply type “milkweed” and ask for assistance in identifying the plant, states the news release.
Ready to sign up?  You can do so here.
Related posts: