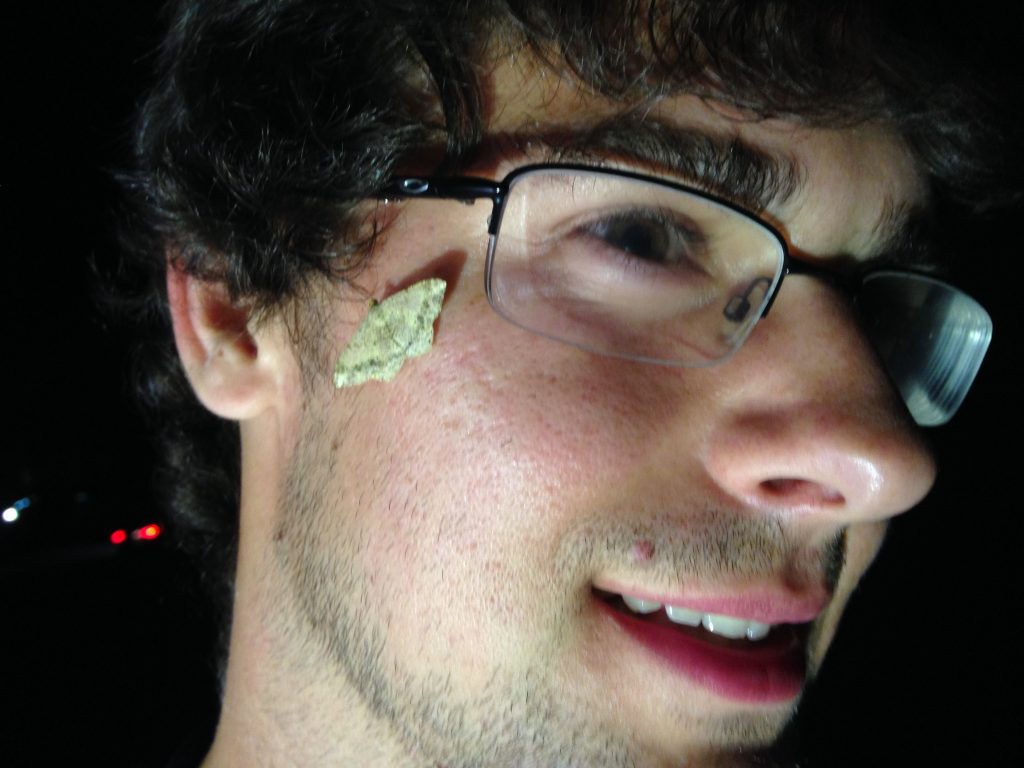 We encourage everyone to join the fun at the Brewery next month, but remind you that anyone can stage a moth night in your own backyard, the park or the neighborhood.
“It’s amazing what you can find once you start looking–even if it’s just from the comfort of your own home” said Large. “With moths and many other insects, just turn on a porch light at night and see what happens,” he said.
Dr. Lyons’ Trinity biology students will assist citizen scientists in identifying moth species and uploading the data to iNaturalist. “Crowdsourced data collection at events like Moth Night help us understand the greater ecosystem,” said Dr. Lyons.
Plus, it’s just fun to hang out in the dark, enjoy a beer and see what shows up.
While most people view moths as pests, only one family of the hundreds of thousands of species eats clothes. As one who has been partial to publicity hogging butterflies for many years, I was surprised to learn that moths outnumber butterfly species 10:1.   Scientists believe that somewhere between 160,000-500,000 species of moths exist.
Moths indisputably get a bad rap.  Not only beautiful and interesting, they play an important role in the food chain, serving as pollinators and food for pollinators and other creatures.
Bees pollinate the malt that makes our beer, but moths help make tequila happen, for example.  They serve as a primary protein for bats, which pollinate the Agave cactus from which tequila is distilled.   And the “worm” in the Mezcal bottle is actually the caterpillar of the Tequila Giant Skipper, Aegiale hesperiaris, a species that lies taxonomically between a moth and a butterfly.
San Antonio’s Malt, Hops and Moths Night joins hundreds of similar National Moth Week events around the world. Last year, more than 400 events took place in 50 states and 42 countries. To see the event roster, check out the map on the National Moth Week webpage, and please join us on July 23!
Special thanks to our Malt, Hops and Moths Night sponsors:   Alamo Brewery, The Arsenal Group, City of San Antonio, Friends of San Antonio Natural Areas, Texas Butterfly Ranch, Trinity University, and the Rivard Report.    And:  special thanks to Jeremy Karney of the MonksToolbox for developing our logo.  GRACIAS!
Related posts: