Confession:  the Texas Butterfly Ranch is guilty of species-ism.
Of the 230 posts published here in the last five years, only 10 have been about moths.   Yet moths occupy a huge majority of the order of Lepidoptera–numbering an estimated 150,000-500,000 species vs. butterflies’ measly 20,000. 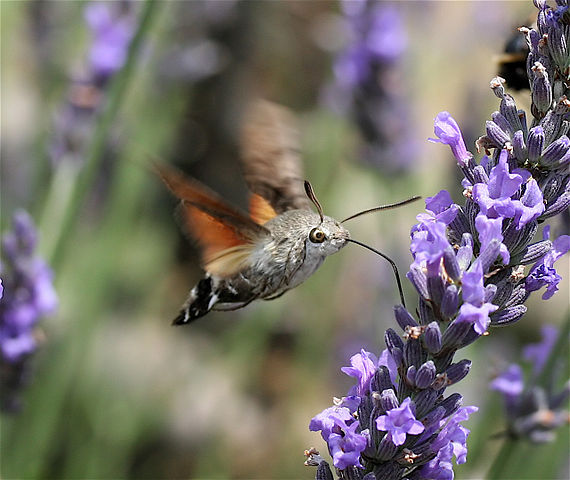 Manduca sexta says moths have suffered at the wings of butterflies with color. Photo via IronChris via Wikipedia Commons

Moth followers, or “Moth-ers” as they’re known, would say that butterflies are just day flying moths, yet we almost always refer to moths as the “night flying butterflies.”
In a salute to National Moth Week July 18 – 26, we attempt to rectify this wrong with a focus on moths.  A full week of moth festivities organized by our insect loving pals at the Friends of the

East Brunswick Environmental Commission will be here soon, including our own San Antonio National Moth Week event.
Malt, Hops and Moths: Moth Night at the Alamo Brewery takes place July 23, 9 PM – Midnight. The FREE, family friendly  evening of exploring night-time nature will join hundreds of Moth Week events celebrated around the world. San Antonio is on the Moth Week map and makes one small flight toward species equality. Want to join us? Please let us know so we can plan properly with an RSVP.
This year’s featured moth family is the Sphingidae, which includes sphinx and/or hawkmoths.
Loathed by gardeners in its caterpillar stage, the Manduca quinquemaculata, or tomato hornworm, has eight V-shaped marks on each side and a signature horn on the rear.  Manduca sexta, the tobacco hornworm, closely resembles its tomato preferring cousin, but shows seven diagonal white lines on its sides and a curved horn. Both caterpillars turn into large moths with four- to six-inch wingspans in colors ranging from brown and gold to pink and grey.   They often are mistaken for small hummingbirds when they fly during the day and  hover helicopter-style to nectar on flowers, which is why they are also called Hummingbird or Hawk Moths. 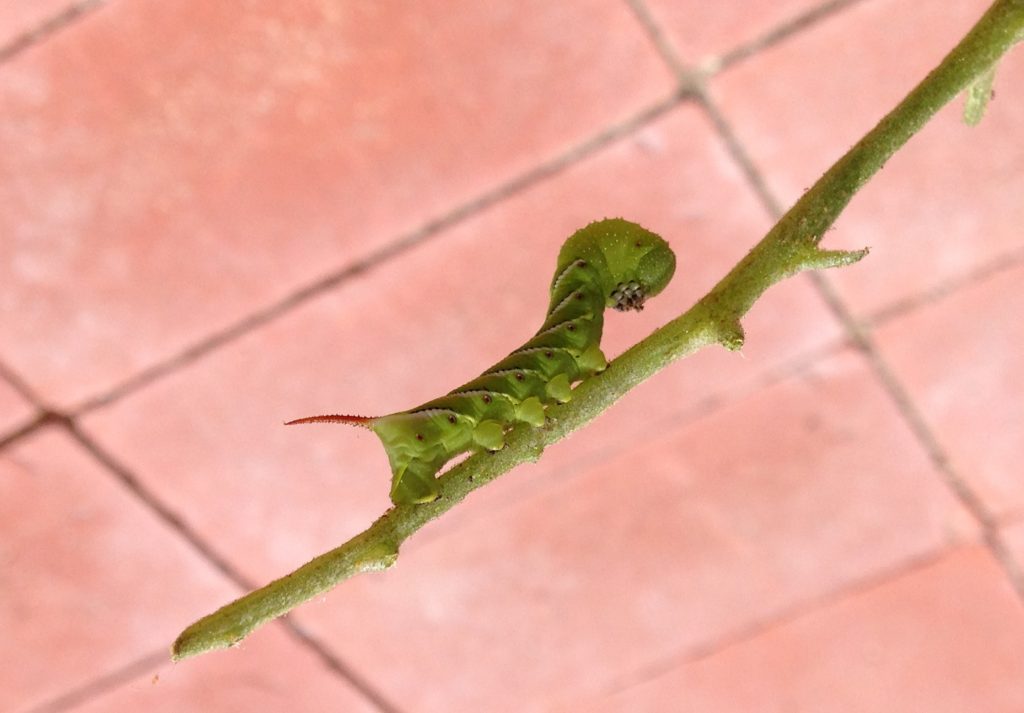 The hornworm caterpillars get their name from the signature horns that grace their backsides. The “Sphinx Moth” moniker results from the distinct pose the caterpillar assumes when disturbed. Upon the mildest poke, the creature rears its head in a thoughtful stance, hoisting the upper third of its body in a sphinx-like posture. 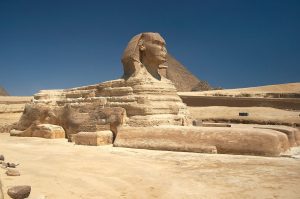 Which came first, the SPhinx or the Sphinx Moth? The latter. Photo via Wikipedia

Sphinx moths have charms all their own, as noted in this exclusive interview with Manduca sexta, spokesmoth for National Moth Week.
Question: Why do butterflies get all the attention?

Manduca sexta: Lepidoptera of color definitely get all the glory. We are often grey or brown and perceived as drab or uninteresting.  We’re dismissively referred to as LBTs–“little brown things.”
Yet many of us are as colorful and glorious as our day flying cousins.  Only one family of moths consumes clothing, yet people brand us as pests even though most of us contribute necessary ecosystem services like pollination and serve as food to other creatures.  Perhaps because moths mostly fly at night…it might raise some shackles in folks.  They think we’re creepy.  I happen to be a dusk flyer.
Question:  Tell us about that–your reputation as a “hawkmoth.”
Manduca sexta: We Sphingidae are rightly proud of our flight capabilities.  We’ve been clocked at 30 miles per hour and have the ability to hover, which requires enormous energy. Our flight behavior is so exemplary that aeronautics companies study us to get ideas for making drones and other micro-aerial devices (MAVs). Yep, when it comes to scooting through the sky in the dark, nobody beats us. 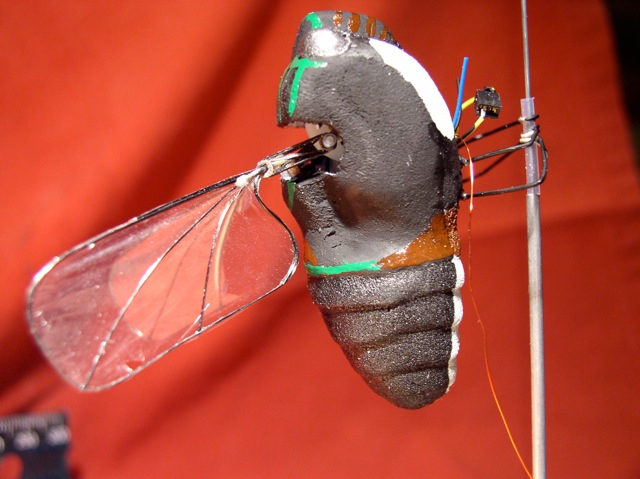 MAV by Phototronics inspired by moths and other insects. Photo via National Moth Week Blog

Question: What’s a typical night like for a hawkmoth?
Manduca sexta: It’s about finding food.   And us hawkmoths don’t visit just any flower for a nectar sip.  We’re very particular, drawn to white, yellow or super pale pink flowers.  Hawkmoth-pollinated flowers also are heavily scented.   Our sense of smell is excellent and allows us to find these flowers in total darkness, from up to a mile or more away. Jimsonweed is one of my favorites.
One study gave us some well-deserved credit as the primary pollinators of Agave plants in the Arizona desert–so I guess you could say that thanks to us, tequila happens.
It’s not all flitting around in the dark for some quick nectar high, though. The night flying is riddled with danger. At any moment we could be snatched up by a bat or nighthawk, run crosswise with a speeding truck, or find our way into a screened porch with no chance for escape. It’s a dangerous world out there, but we do our best.

This Sphinx moth smells the heavy scent of  Datura and is diving in with its long proboscis. photo by Betsy Betros, via BugGuide.net

Question:  Why should human beings care about moths?
That is just so Homo sapiens of you.   Why is every living creature cast in the context of human beings?   Other species occupy this planet.
If we must cast our existence in such a context, I’ll reiterate that we perform important ecosystem services–at no charge, mind you–pollinating various plants as mentioned above.   We’re also are a primary source of protein for bats, birds and other creatures, providing a high nutrition pop with very little fat or carbs.  Were it not for us moths, other creatures would suffer a food shortage and perhaps perish.  And if bats and birds ceased to exist, you’d have an overpopulation of mosquitoes and other pests that sting, bite and cause disease.   So…as you can see, it’s not as simple as what’s in it for me?  It’s our role in the greater food chain that matters.
Question:  Anything else you want us to know?
Manduca sexta: I’d just like to clarify something.  That movie, The Silence of the Lambs, with Jodi Foster and Anthony Hopkins as the cannibalistic serial killer, Hannibal Lecter?  That did a real number on moths’  reputation.
You think moths are creepy? That crazy “Hannibal the Cannibal” puts hawkmoth cocoons in his victims mouths as some sort of sick gesture of transformation. And they have us flying around in a weird, dark basement evoking a strange terror.

It’s true that a bunch of tobacco hornworm moths used in the film were treated like celebrities by the filmmakers.  They flew us first class to the set in a fancy carrier and had special living quarters with controlled humidity and heat.  It was pretty sweet.
But just to be clear, on the movie poster, the moth on Jodi Foster’s mouth had a skeleton skull photoshopped onto a sphinx moth.  That was a pretty realistic portrayal of the Death’s Head hawkmoth–which is generally only found in Africa and southern Europe.
So, to be clear, we had NOTHING to do with Hannibal the Cannibal.  That was fiction.
Related posts: