Scientists have been scrambling  to assess the mortality of the roosting Monarch butterfly population in Michoacán, Mexico, following a freak March 11 winter snowstorm that dropped temperatures to sub freezing and included wind gusts up to 50 miles per hour in the butterflies’ ancestral roosting sites.  For now, the estimates of how much of the migrating Monarch butterfly population perished are at best an educated guess.

The scene at Chincua the day after the storm.   Photo by Dr. Isabel Ramírez

“I have no new information. We are ‘in limbo,’” said Dr. Chip Taylor, founder of Monarch Watch, the citizen science organization based at the University of Kansas that tags the butterflies each fall to track their migration.

Dr. Lincoln Brower has been working long distance from his home in Sweet Briar, Virginia, with a team of scientists on the ground in the 10,000-foot-tall plus mountains northwest of Mexico City where the butterflies roost each fall.  They’ve been gathering data, reviewing climatology information, making observations, and reviewing photos and historical accounts of a previous freeze in 2002.

“It’s been difficult and there are conflicting reports as you know,” said Dr. Brower via email, referring to Mexican tourism officials downplaying the severity of the situation. Soon after news of the storm broke, Mexican officials claimed that only 3% of the butterflies had been affected–about 1.5 million of the estimated 200 million roosting.

“The climate data we have suggest about 50% mortality in Chincua but observations suggest that Rosario was hit harder,” said Brower, referring to the El Rosario sanctuary, the preserve most often visited by tourists. The 50% number would mean 100 million butterflies took the hit–which still leaves us up over last year, just a disappointing and devastating turn of events, if true.

Dr. Cuatémoc Sáenz Romero, a forester who studies the Oyamel forest and is promoting an initiative to move it higher in elevation to save it from climate change, thus guaranteeing the Monarchs a future winter roost, said he visited the sanctuaries two weeks after the storm. “Except for some trees fallen, I did not see dramatic damages,” he said.

Many of us are wondering how many of the butterflies had already left the colony when the storm hit on March 11.  Typically the first and second week in March are when the Monarchs bust off the Oyamel trees in response to warmer temperatures and begin their journey north.  We start to see them moving into South Texas as they search for milkweed on which to lay the first generation of eggs in the multi-generation migration. Some Monarchs have definitely made it to San Antonio and South Texas as we are witnessing and hearing about first-of-season sightings and finding eggs on local milkweeds. 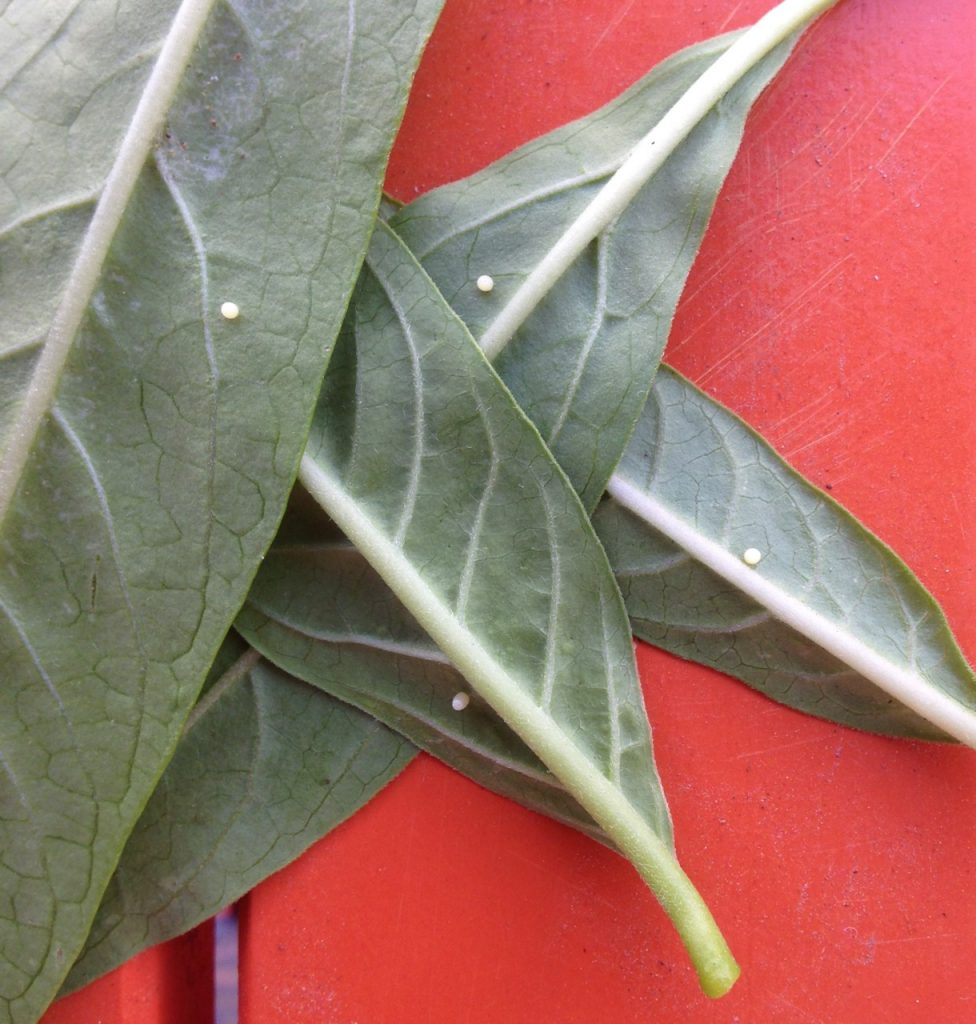 Who’s got Monarch eggs? We do in San Antonio. At least SOME Monarchs escaped the storm. Photo by Monika Maeckle

The question of how many Monarchs departed before the storm hit may be rhetorical, according to one scientist.

“Perhaps that doesn’t even matter given how widespread this storm was,” said Monarch and migration scholar Dr. Tyler Flockhart of the University of Guelph in Ontario.  Flockhart said that according to weather data, the winds were so strong that temperatures inside and outside the forest were pretty much the same, suggesting the “butterflies would have been exposed to very cold temperatures.”

Scientists consider the forest canopy as an insulation blanket.  As climate change and illegal logging conspire to undermine the forest in the roosting preserves, the unique ecosystem of moisture, temperature and protection from the elements becomes threatened.   Several scientists expressed more concern about the huge trees that had been taken by the storm than the mortality of the butterflies, since it will be extremely challenging to recreate the forest canopy in the short-term.

Meanwhile, a study conducted by the Monarch Conservation Science Partnership and released in the journal Scientific Reports March 21 found that the Monarch migration has an 11 to 57 percent chance of facing “quasi-extinction” in the next 20 years.

We should have more definitive information in the next few weeks as the scientists review the collected data.  Stay tuned and keep those fingers crossed.
Related posts: